For those of you of a certain age and British — especially if there are any of you still involved with horse trading or selling rams — that description will immediately sound some melodic chimes.  Its significance may be slightly less obvious to the rest of you…

Anyone who said “that’s what a guinea’s worth, isn’t it?” gets a prize. The English Guinea was — until the Great Recoinage of 1816 when it was replaced by the current pound — a gold coin that had been used, by then for close to 150 years, as the standard unit of currency in the British Isles. [For those of you too young to remember, there were only 20 shillings to the pound. And twelve old pennies to the shilling, thus 240 pennies to a pound. Decimalisation? Hell yeah, bring it on.].

The writer, Stephen Kimble said of it:

What is a guinea? ‘Tis a splendid thing.

And it was (possibly apocryphally), named ‘Guinea’ (or ‘Gold‘), after that country on the coast of West Africa from whence the Royal African Company — which had been granted a monopoly over the whole trade with Africa from 1672 until 1698 –had, using local “employees” (aka “slaves”), torn that gold out of the ground, killing many of the native miners in the process, stealing this hard won prize from those self-same native owners and shipping it back to the Royal Mint. Like so many other times, not one of the most shining periods in our history…

That similarly derived name was used as the nomenclature for a pig from the same era and area. Enter the American Guinea hog… 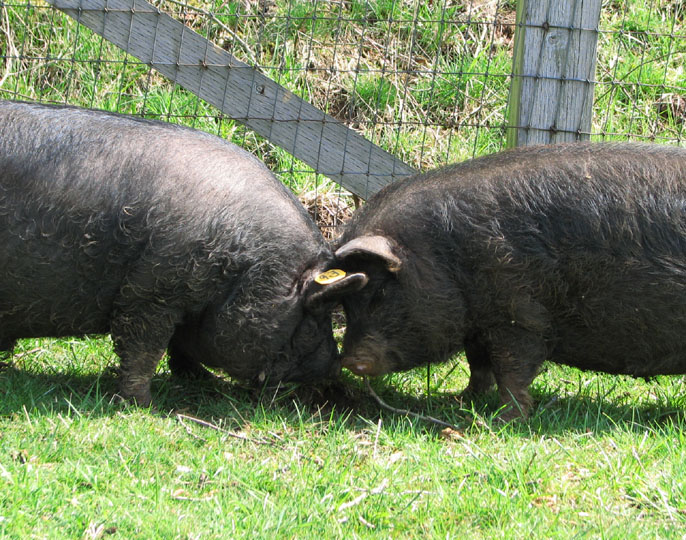 It’s another “heritage breed”, along with the previously mentioned Ossabaw and, like it, is also included in Slow Food USA‘s “Ark of Taste“. As with the Ossabaw, they arrived in the Americas from foreign lands, but brought over in this case slightly later, as cargo on the slave ships shuttling back & forth in their horrendous trade in humans from West Africa where theSpanish & Portuguese slavers used the Canary Islands as an important staging post. 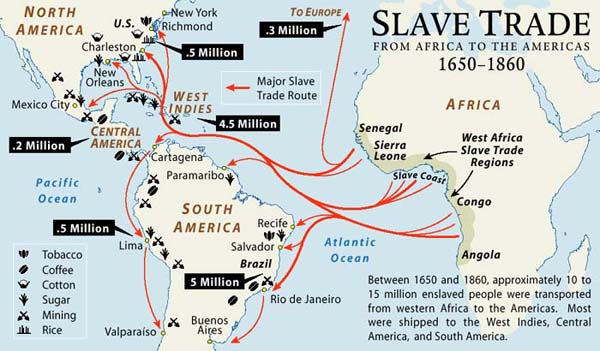 The current African Guinea hogs are natively still a large, red breed, with upright ears, bristly hair and long tails, believed to show the genetic influences of the Nigerian black or Ashanti pig. Around 1804, Thomas Jefferson — politician and notorious slave owner and slave abuser — is recorded as acquiring some of these pigs. The original strain, although basically black, also had a hint of red and were consequently called “red Guineas”; that strain, well known at the beginning of the 19th century, is now extinct although there is still the occasional birth of a reddish pig to the normally bluish-black American Guinea parents. 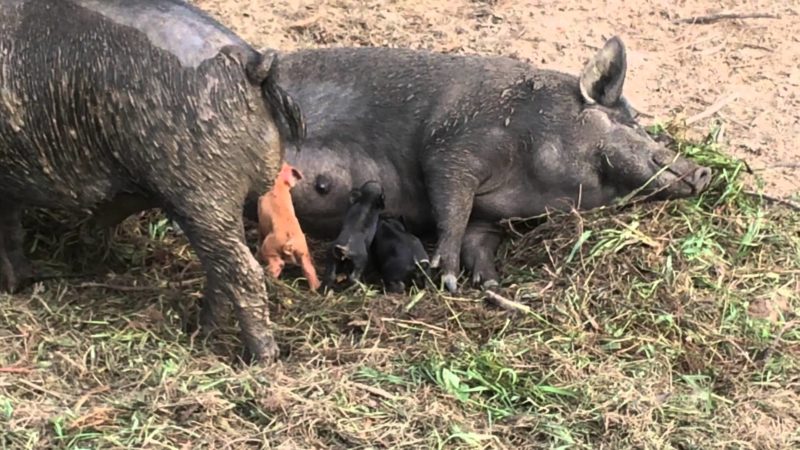 Later crosses with other breeds, including Appalachian English pigs (I’ve not yet been able to find whether these were indeed from England), Essex pigs, and West African dwarfs gave the U.S.A. the American Guinea hog, which retained its black colour but pretty much totally lost any red tint — and it’s still sometimes called a Black Guinea. Through the years they’ve had other names attached to them: the “Pineywoods Guinea”, “Guinea Forest Hog”, “Acorn Eater”, and just plain “Yard Pig”.

They were popular with subsistence farmers, not only as self-sufficient foragers able to put on weight with even the meanest of pickings — eating rodents and other small animals, grass, roots, and nuts, and helping to to clean out garden beds  — whilst producing the hams, bacon, and lard essential for subsistence farming, but also because their habit of eating snakes, which made the yard a safe zone for both children and other livestock. And again like other heritage, old, breeds, they have a high fat content, which could be used for everything from cooking and baking to making lamp oil, soap, and even lubricants for farming machinery.

Southern farmer Grá (pronounced “Gray”) Moore initially started raising the very wonderful (English!) Berkshires about 10 years ago on his land at Carolina Heritage Farms in Pamplico, South Carolina and then followed up by moving onto also breeding Guinea pigs and previously mentioned local chef Sean Brock uses him still as a supplier. Below he talks about what he feeds these animals [along with whey from a nearby goat dairy]:

“I have two acres of woods with acorns and persimmons,” says Moore, “and an acre field where I plant peas and corn and I feed them off of that. In winter, I plant winter peas and turnips and oats. I supplement with corn grown on my father’s farm. I get pumpkins, sweet potatoes, and peanuts from nearby farms. Once in a while, I’ll have to feed them commercial pellet feed — with no antibiotics — but 90 percent of what they get is grown locally.” 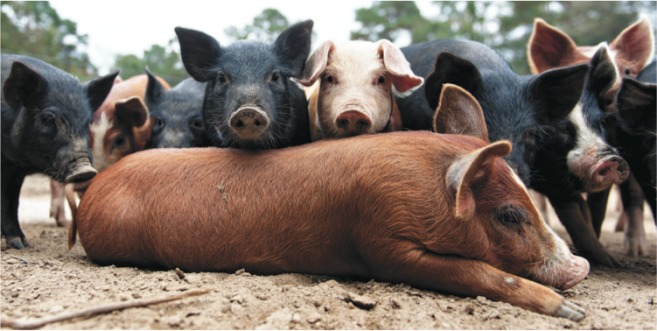 Chefs and farmers swear that what the pigs eat inform their flavour. Brock is currently working with a pig from Oregon that is fed hazelnuts during its last 90 days, which gives the meat an amazingly nutty flavour. Moore says his pigs have a nuttier, richer taste because of their diet of acorns and peanuts. “Certain things you feed them do influence the taste,” he says. “Corn is one of the worst. And fat from pigs fed on corn is proven to be bad for you, while fat from pigs fed acorns and nuts and alfalfa hay has the consistency of olive oil.”

Because of this great fat, the Guinea also makes amazing charcuterie, as showcased to great effect by Craig Deihl, executive chef at Cypress in Charleston.  This is just mouth-wateringly gorgeous: 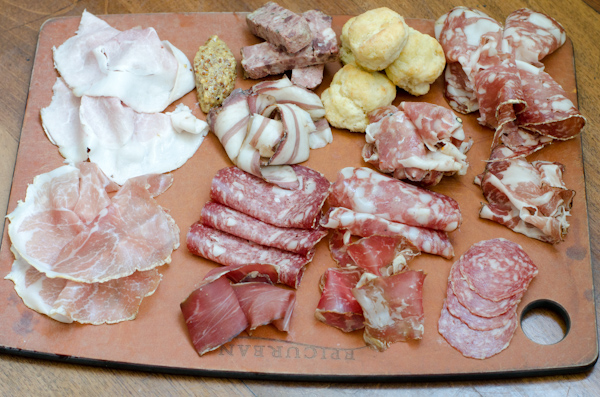 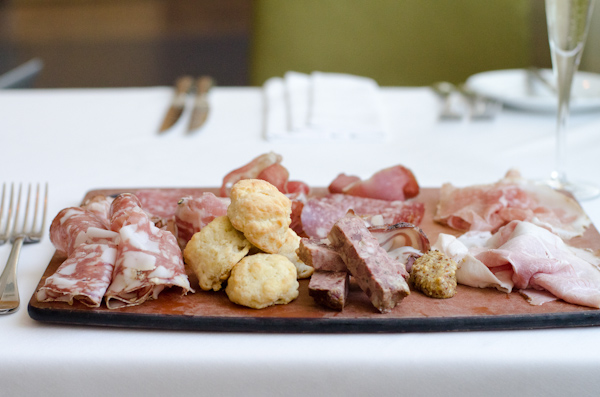 “This was definitely not your typical pig,” says Deihl. “When I saw it and cut into it, it reminded me of a mini-Mangalitsa. The fat was stark white and two to three inches thick.”

“It’s economical, and I can cure in four to six months as opposed to double that amount of time [for most breeds].”

So, what are you waiting for Americans? Go out and order this pig from your butcher or local restaurant. That way, this demand keeps these farmers keen to keep on keeping on and producing (and thus conserving and increasing the numbers of) this lovely beast.

Only in 2005 was the American Guinea Hog Association setup who undertake similar work to that performed by England’s Rare Breeds Survival Trust. With their encouragement alongside these farmers and chefs already mentioned, there are now about 2,000 to 3,000 Guinea Hogs in existence today, which still leaves it on the “Threatened” list, although it’s not nearly as badly off as the Ossabaw, Chocktaw and Mulefoot which are all rated as “Critical”.

Remember: it’s all about genetic diversity. Think of it a little like an investment portfolio. It’s important that this reservoir of genetics stick around. Homogenous, unvaried, bland and thus vulnerable is bad. Really bad. So, eat them to save them. And soon!

And finally? Finally, a reminder about the work being done by the Farms Not Factory team. Whilst I have indeed read, learned and inwardly digested [a methodology drummed into me at an early age by a headmaster] the eloquent points made by the very fine Jay Rayner in his “A Greedy Man in a Hungry World: How (Almost) Everything You Thought You Knew About Food Is Wrong”… 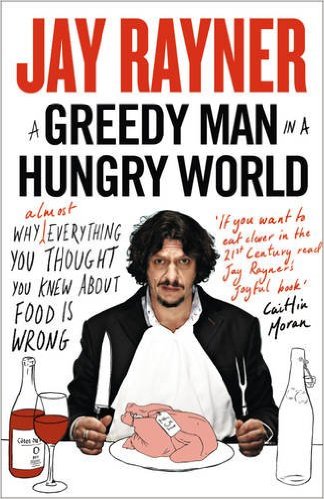 …there’s nothing in there that says that anyone should be unkind in their treatment of the animals you’re going to eat. So don’t fucking do it eh? And don’t let anyone else do it on your behalf. Buy the right meat. This easy graphic makes it very clear which ones are and which ones aren’t thus “sanctified”. 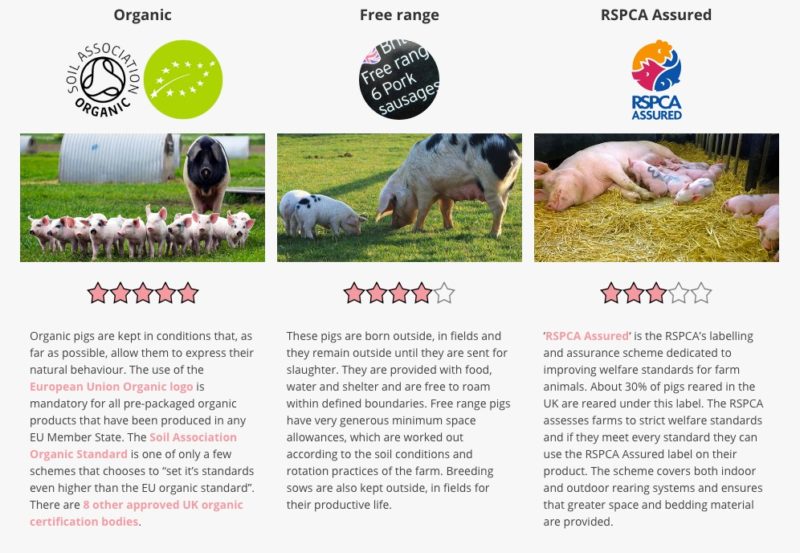