A boy and his pig(s)

Does anyone remember the (always) amazing Harlan Ellison’ “A Boy And His Dog” short story (later a film with a very young Don Johnson)? No? Go out and find a copy. You’ll not regret it.

You’ll recall that I’ve raved before about the sublime April Bloomfield and her love of pigs, a love perfectly & passionately documented in her “A Girl And Her Pig” which I covered here last year. In a serendipitous meeting in 2012, she stumbled across the equally wonderful Tom Adams and after much meat and bourbon had been consumed over the next 4 years, thus was born their joint venture, Coombeshead Farm.

And here it is that you will find Tom rolling joyously around in the straw with his beloved Mangalitsa pigs. I bloody love this picture. Would I swap places with him? In a heartbeat! Am I envious? Too frickin’ right I am 🙂 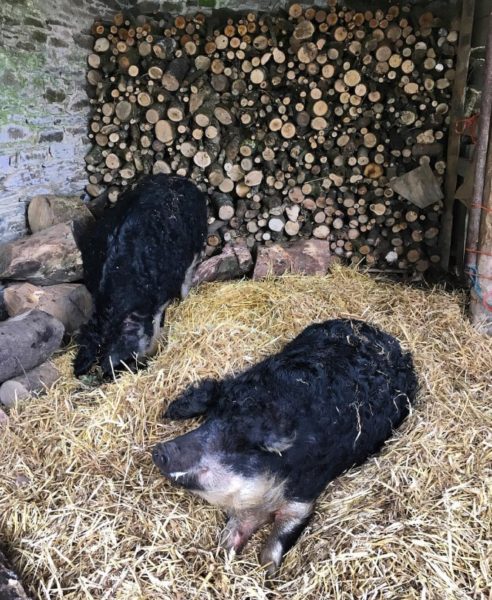 Five years ago he had less than 20 of these beauties, now the herd there numbers around 70 with Pitt Cue going through two of their 80kg carcasses weekly and Coombeshead using less but still taking one a month. As befits two huge enthusiasts of the “head to tail” ideal, nothing is wasted. Even the ‘gribbly‘ bits (as they’re called in this recent Guardian piece) get used up. And that of course is exactly how it should be done. Wasting nothing; and by doing that, you pay the appropriate respect to the animal.

Lars Hinnerskov Eriksen, a Copenhagen based writer & cook, was one of the 25 people (big hitter chefs inc. April & Nathan Outlaw, knife-makers, butchers, an expert on veg, even a man who specialises in building cooking appliances and supplying exotic woods) lucky enough to go to one of the Pitt Cue Pig Weekends. Obviously my invite must have got lost in the post eh Tom? Eh? Eh? Right? You complete & utter bastard!

Anyway, alongside an early breakfast ration of spleen meat on toast, blood-cake, and brains mixed with egg, lard, and parsley, he and the rest of the guests were also able to dive into these delights over the course of the weekend, ones very reminiscent of those from the ‘matanza‘ I’ve described held in Spain…

“…liver with peaches (yes, it works), fried liver coated in coconut (oh yes, just as good), lung and heart stew, strudel made with pork fat, and a traditional Austrian klachelsuppe with knuckle and tail. [Isabell] mixed the blood with fat, rind and barley, and poured it into a massive beef casing for the blood sausage. Then came the meat spread, minced trimmings from the day’s butchery braised with garlic and lard.” Lars Hinnerskov Eriksen

…along with Beuschel, a spiced sauté of heart and lung meat seasoned with mustard.

So, this was two days, totally devoted to the calm killing, careful butchering and exultant eating (in the case of the big cuts preserving them for later use) every bit of offal from one of Tom’s pigs, trained & assisted by the “Austrian pig wizards” — as Tom described them — the husband and wife team, Christoph and Isabell Wiesner’s from Arche de Wiskentale. 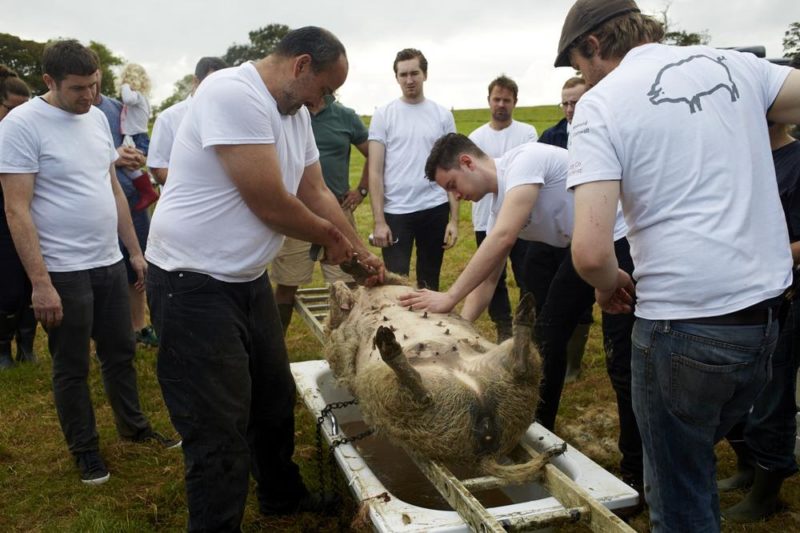 As well as world-class breeders of Mangalitsa, they’re experts in “seam butchery” — so much so Christoph was called by April, “master” — a process where, unlike with the traditional English (and elsewhere ) butchery method of cutting across bone, sinew, connective tissue & muscle resulting in large, regular shaped chunks of roastable meat, instead they separate the carcass wherever possible, into individual muscles or muscle groups, by following the “seams” where they join the skeleton. 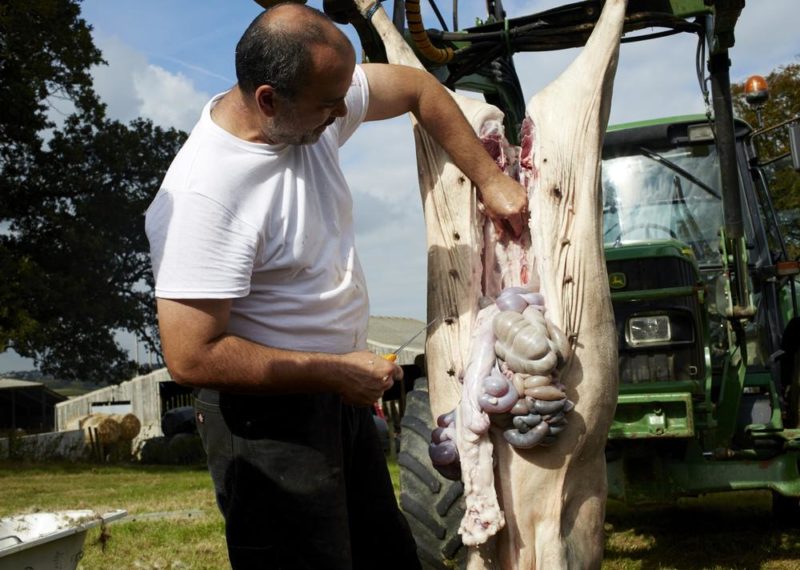 There’s a quote by Christoph that perfectly sums up the ethos and the concern behind how the animal is looked after and, ultimately of course, killed

“You can’t make it any better but you can end up disturbing it. That’s the reason why we slaughter the animal in its group and on the feeding place. A transport even two weeks before will show on the meat.”

It’s well worth reading Lar’s entire piece here but for the moment, I’ll leave you with the last of his excellent photos showing the entire pig (one butchered a few days earlier) prepped and ready for a long slow cook over oak — giving flavours of tobacco and beurre noisette — and ash, a more clean, zesty, mineral note. Or so says Mark Parr, from the London Log Company who supply Pitt Cue with their wood and charcoal. And you know what? In that august company, I’m not arguing. 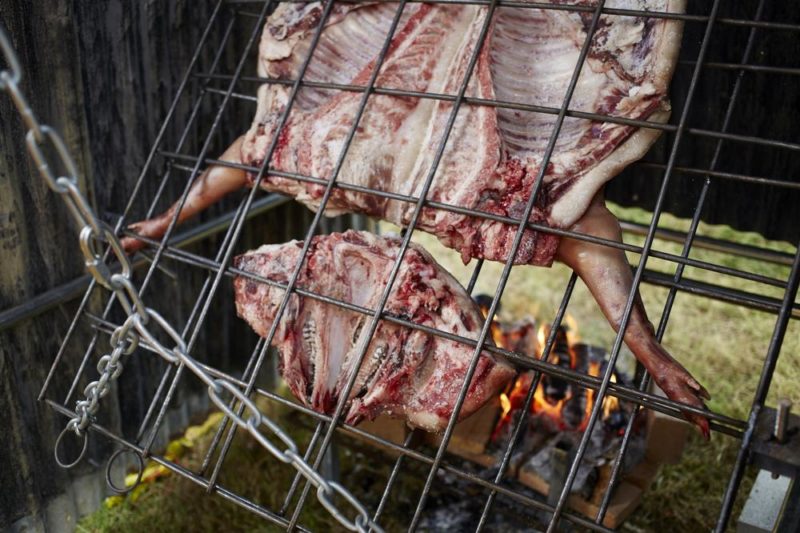 And finally, as an homage to Fergus (there’s only one Fergus; you know who I mean), I’m stocking up on Fernet-Branca and ordering in some crème de menthe to make his favourite “pick me up” (or “start the day right” or “anytime it’s needed during the day”) drink. 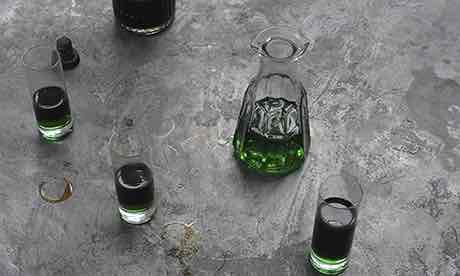 © Jill Mead for the Guardian

Pour over ice and drink, ignoring the rather frightening colour. But beware & heed his words of advice:

“Be careful: this is so effective you can find yourself turning to its miraculous powers with increasing regularity. Do not let the cure become the cause.”