A cure for leprosy? And a baby for the bard.

I told you before how smart are pigs. Smart enough apparently to cure King Bladud back in the 9th century BCE.

According to the historian Geoffrey of Monmouth, Bladud was the eldest son of the legendary King Lud (Lud Hurdibras) at that time. The legend  continues that that Bladud contracted the disease and thus disfigured and rejected by his father, was banished to Swainswick to become a pig farmer. Before he left, his mother gave him a golden ring – a key to return to the kingdom, if he could ever cure himself.

Soon, his pigs also came down with the same disease. One day as he was watching his pigs, Bladud noticed that some of them were rolling around in a black bog in the marshy ground. Taking a closer look, he found that the marsh was fed by a bountiful hot spring. Realising that the pigs scurvy had been cleared up by the mud, Bladud himself started to roll in it, smothering his whole body from head to foot. 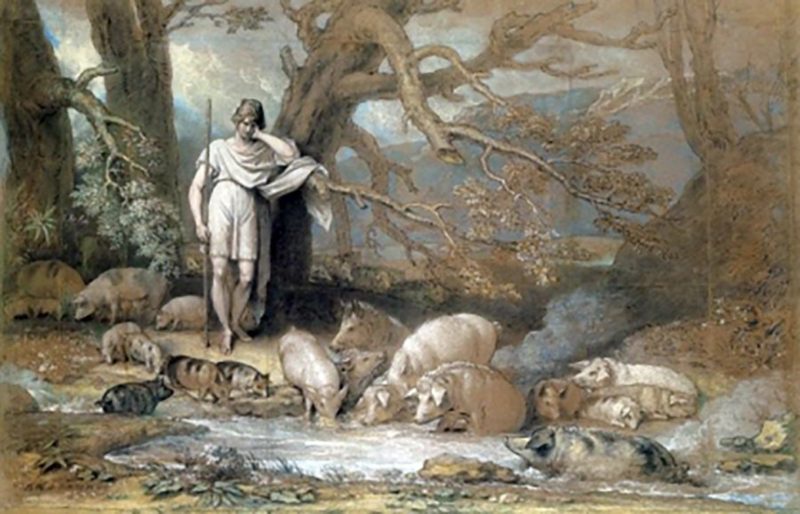 The story goes that his leprosy soon disappeared and he thus felt able to return to his father’s court, where he was welcomed with open arms by his mother, who recognised the golden ring she had given to her son, many years ago. Bladud then went on to found the city of Bath. He also apparently built for himself a “pair of wings” and succeeded in flying as far as the Temple of Apollo in the town of Trinovantum (the name mythically given to London in earliest times) — a distance of 112 miles if driving — where unfortunately we’re told, he crashed and was ‘dashed into countless fragments’.  Fortunately though, prior to this death in 852BC, he’d managed to sire King Lear.

So, you see, without the genius of the pigs we’d also have been one (great) story short in the canon of Shakespeare’s works. So, a rousing “Thank you!” again to the pigs. From both Bladud & The Bard.