This isn’t totally about Sus scrofa (otherwise famous as the Wild Boar) but as they’re the common ancestor of nearly all domesticated pigs it seems a good time to give some background on these still extant, fascinating animals. This longer article will therefore be a mix of information as there’s so much shared between them. And one interesting titbit to start us off (although it may not be immediately obvious), as an even-toed ungulate* — part of the order Artiodactyla — one of its close “cousins” is actually the giraffe.

* [They’ve actually 4 toes per foot but only use two of them to walk upon].

The boar probably started off its rise to dominance in Southeast Asia during the early Pleistocene era (around 2.5 million years ago) and then both out-competed other species of suid (such as the wart-hog or the wonderfully named “bearded pig of Malacca”) whilst simultaneously profiting from intervention by humans — who, eager for the tasty flesh and other benefits available from this wonderful creature — helped it to spread all across the globe.

The only continent that now doesn’t have any descendants of sus scrofa is Antarctica. Well, apart from carcasses flown in for the cooks tasked with looking after the dietary needs of the research scientists, slowly floating around at the bottom of the world.

So, circa 9500 BC, during the Mesolithic period and not long after the end of the Ice Age, when the subsequent retreat of the ice and glaciers meant that the forests started to move North, wild boar were an important prey animal for the early hunter-gatherers now living in Britain, northern Europe and Scandinavia. The displacement of sub-Arctic tundra by the rapidly advancing deciduous forests had led to the northerly migration of the wild boar and the also prized red deer & elk. 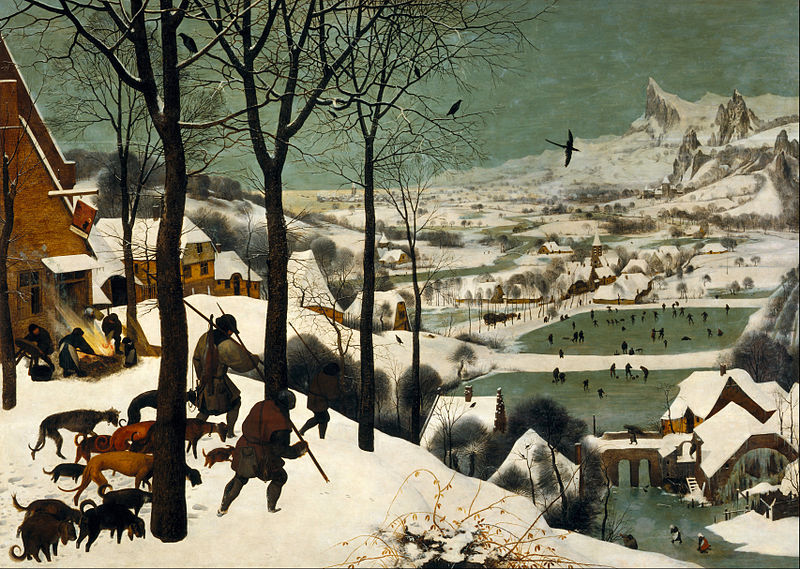 Pieter Bruegel the Elder – Hunters in the Snow (Winter)

Such a hunter-gatherer society was/is highly dependent for their very survival on the success of hunts, which made central the humans’ relationship with their prey. In such societies, rituals are directed towards animals in order to achieve a successful hunt and to their spirits, to placate them and encourage them to stay around, ready for the next hunt.

But then, starting around 3000 BC, Neolithic farmers changed to domesticating their animals. The need to hunt the swines’ dangerous wild cousin declined until it started to become what turned into the preserve of the well-equipped aristocratic warrior. The hunt was no longer critical to survival; when undertaken now, it became closer to a sport, whilst the fertility of the fields and animals took the central role in peoples lives and thus usurped the hunted animals in their religious pantheon. 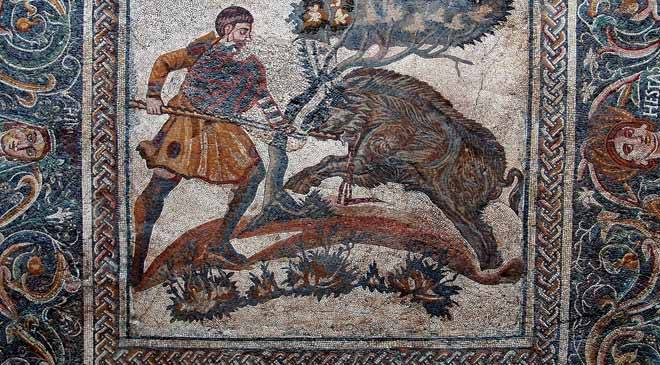 Still however, the mighty Wild Boar continued to be hunted for other than his simple value as the source of a good meal. People who keep pigs do not need to hunt boars, which is a hugely chancy business (especially if all one has is a spear). Both the males and female boars can be dangerous. Females are hugely protective of their young, using their snout and teeth to fight and bite, lacking as they do the large tusks that the boar uses when it charges, slashing upwards with those tusks. They’ve gutted hunting dogs, horses and men… 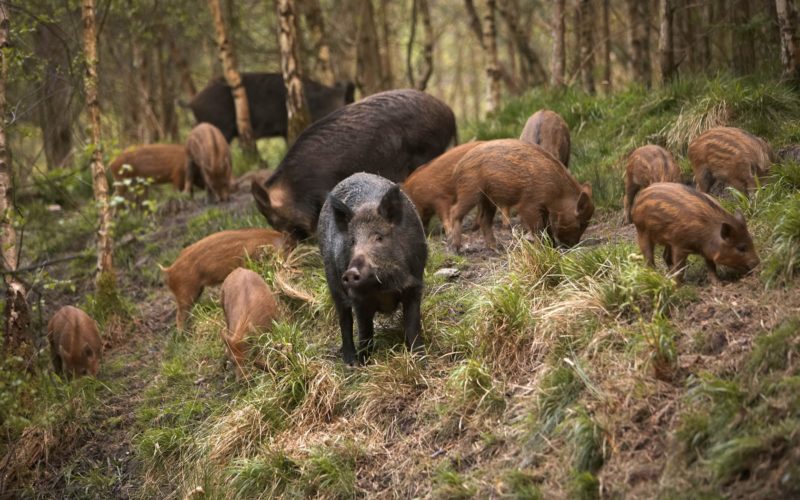 Wild boar generally forage in early morning and late afternoon or at night. They are fairly elusive and shy and only really dangerous when they feel threatened and cornered. Thus, many of the stories of their ferocity revolve around the hunted boar; caveat praedator applies here. 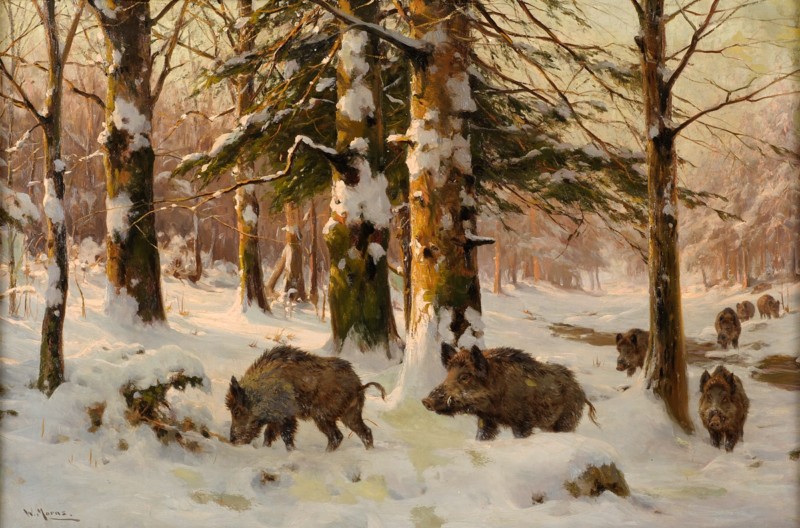 But hunting still went on, both as a source of meat at times of the year when there was little meat available from domestic animals but as importantly, as a status symbol, for the “kudos of the kill”. A hunter might well treasure a pair of boar-tusks and wear them, set with silver, as a pendant to demonstrate his bravery. You’ll probably not be surprised (although disappointed of course) that I can find no records of female hunters being praised for their valour or of any jewellery showing their kills…

By the 13th Century, these “original” wild boar had been pretty much hunted to extinction, certainly in the British Isles, although large pockets remained elsewhere, especially in eastern and southern Europe. Re-introduced to England in the 1980s (and intended to be farmed commercially), their intelligence and Houdini-level talent for finding an escape route, means that there are now sizeable colonies living truly wild, especially in southern England – a problem for ground-keepers.

Boars grow to a considerable size with an adult male boar often measuring over six feet long and standing up to 3½ feet at the shoulder. They usually weigh in at around 200lb but giants of over 700lbs in size have been recorded — although some of the claims need more than a handful of salt thrown over them…

The etymology of “boar” is interesting. It seems that the original Old English name for a ‘pig’ is sú or sugu. This means ‘sow’, cognate with the Old Norse sýr and the Old High German sau. These in turn are derived from the Proto-Germanic sugó, which is itself derived from the Proto-Indo-European suhzkéhz (similar to the Sanskrit sukarah – a wild boar or swine). An associated word with the same roots is the Old English swín/swýn which gives us the modern word ‘swine’. This is cognate with the Old Norse svín.

There seem to be two words in Old English specifically for the Wild Boar. These are Eofor (“Ever”) and Bár. Eofor, which is cognate with the Old High German ebur and the Old Norse jór/jöfur, derives from the Proto-Germanic eburaz, which in turn comes from the Proto-Indo-European epuros. This is also the source of Latin aper – meaning ‘a wild boar’.Our modern English word ‘boar’ comes from the Old English bár from West-Germanic bairaz. This is said to be of unknown origin with no cognates outside West Germanic. It is rather tempting though to posi that it derives from the Proto-Indo-European root b(h)ars/bars – “bristling”.The modern English term ‘hog’, comes from Old English hogg. This is thought to be a borrowing from Old Norse höggva – to chop or cut. ©Thegns of Mercia

Like humans, it’s a true omnivore, willing (and able) to eat almost anything, including, inter alia, other small animals, invertebrates & carrion. However, plants as food dominates their diet in the wild, where they usually choose to live in the broad-leafed forest areas, deep in amongst the trees, rooting around in the undergrowth & ground debris with those highly sensitive snouts. Their sense of smell is approx. 2,000 x that of a human — which means they rank right up there with lots of dog breeds. 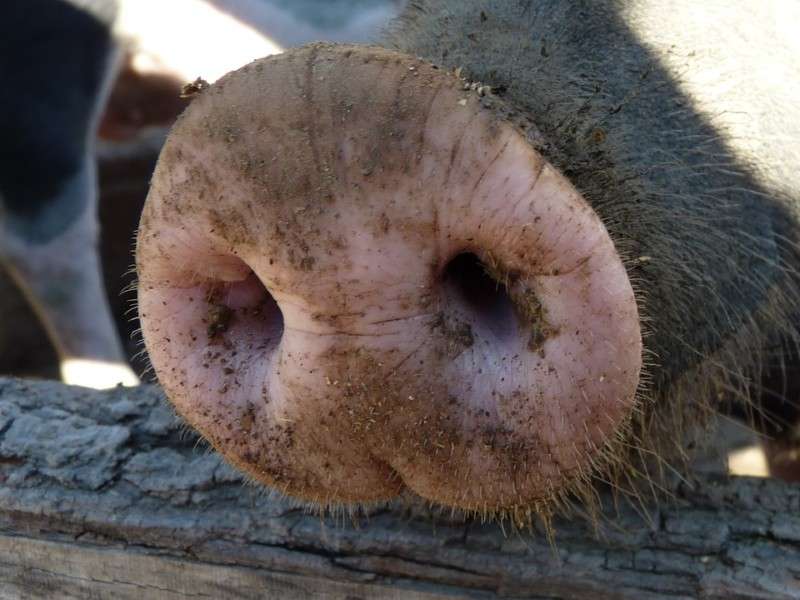 Like the whiskers on a cat, a pig’s snout provides the animal with heightened abilities to navigate and interact with their environment, and is especially engineered for this rooting. Under natural conditions i.e. “in the wild”, pigs can spend up to 75% of their daily activity engaged in rooting and foraging, often for up to 6-8 hours of the day.

The nasal disc on a pig’s snout, rigid enough to be used for digging also has numerous sensory receptors. In addition to being useful as a fine & powerful tool for manipulating objects, the extensive innervation in the snout provides pigs with an extremely well-developed sense of smell, so much so that they can smell roots and tubers deep underground — a unique skill that has been exploited since the Babylonian period to find truffles, a subterranean fungus that grows around the roots of oak trees and is highly prized by chefs. In yet another impressive example of symbiosis and interspecies communication, truffles developed the capacity to produce an allomone that mimics boar testosterone. The sow, upon finding the scent, uses her special snout to dig out the truffle, thus disseminating its fungal spores whilst at the same time, enjoying a treat for her efforts. 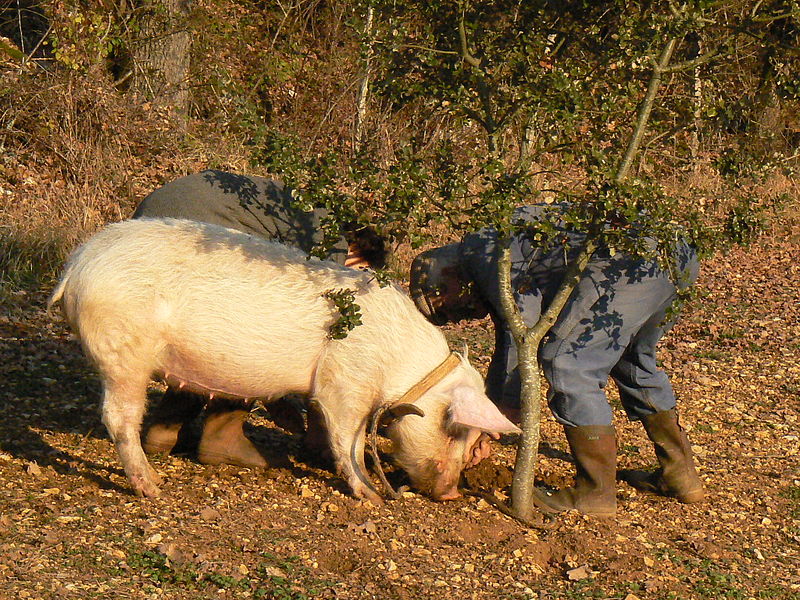 Pigs own olfactory signals also play an important role in communication, and they can communicate by releasing pheromones in their saliva (via facial glands) and in their urine to identify other pigs whilst it’s been shown that even sightless pigs are able to recognise other individuals in their group. Olfaction plays an important role in a sow’s maternal behaviour, helping to form strong bonds with her offspring.

Pigs also communicate by scent-marking prominent features in their home ranges. But as they’re not very territorial, recent research suggests that this might actually be used to establish group cohesion, rather than marking territory.

Interestingly, pigs are one of only four known mammalian species which possess mutations (for those of you who want to research further, in the nicotinic acetylcholine receptor) that protect against snake venom. Along with mongooses, honey badgers, & hedgehogs, pigs all have modifications to the receptor pocket which prevents the snake venom α-neurotoxin from binding. 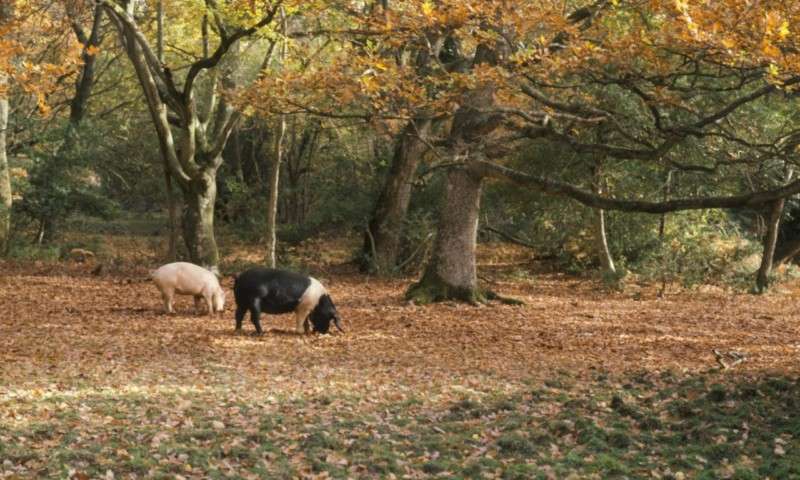 Oak acorns and beechnuts have always been a favoured food and, right though to the present, there still exists the right of pannage in the New Forest in England. Still today, the prized pata negra from Iberia is made from pigs who spend their entire lives eating acorns (poisonous to other animals and humans, but not to pigs). There’s even an English version. Not as good but…

From an Anglo-Saxon poem:

All pigs are gregarious & social animals, so even the wild boar live(d) in family groups containing only females, adolescent males and (stripy) piglets while the old males live alone. This split is maintained on farms to the present day, with the boar kept away from the females (unless to breed) and the smaller males and infants.

To control their temperature they huddle in the cold, and pant or wallow when it gets hot (remember that they don’t possess sweat glands). One of the reasons for this susceptibility to temperature is their lack of brown fat, which helps most newborn mammals maintain their temperature by converting itself into heat. The UCP1 gene which controls its production was shut down in pigs’ ancestors about 20 million years ago.

At anyone time, there are about a billion pigs in the world, and more than half of these live in China (one of the first places the wild boar was domesticated more than 9,000 years ago); as anyone who has consumed Chines food will know, to them, “meat” still means pork. This, along with its huge use in the US, means that pork is the world’s most popular meat: more than 85 billion tons are consumed annually, a full third more than beef or chicken.