As old as our hills?

This week has been a little frenetic with new clients work but I’ve now had a chance to write-up some words on the British Lop pig on its own history page.

Over the hills and far away: An old, old breed, it was one of the two main types seen in England — at least until the mid-18th Century — the small, dark, prick-eared pig, found mainly in Scotland and a larger, lop-eared, white or bi-coloured one located in England & Wales. Both had slowly evolved from the native wild boars (Sus scrofa) of Europe and Asia that were to be found in broad-leaf woodlands & forests where they easily thrived, in both disparate climates.

The boars heavy-shouldered body, with an erect tail, was covered in stiff, brownish-grey bristles which stood up along their neck and shoulders. Hunted by man, their piglets were often caught during the long chase and brought home, later to be tamed, bred & traded.

Pigs aren’t really of much use in a nomadic existence as man soon found out, as they’re difficult to herd over longer distances, so instead, they became the staple of the rapidly settling farmers who, giving up nomadic travels, domesticated the wild breeds, finding that pigs thrived when confined at night and then released and herded by day, leaving them to forage on acorns and beechmast.

Gradually also the morphology of the wild pig changed; its head became smaller, noses and legs became shorter and the entire body lengthened & broadened. In most examples, the bristly hair became finer and smoother and the tails started curling. Romans, as well as building great roads and saunas, had managed to get pig breeding down to a fine art although their knowledge of such fine uses for pork as cured and sausage making, became lost after the fall of the empire, only being re-discovered in the Middle Ages.

As an aside: there’s a great usage of the word “pannage“ that I only recently came across, and that I’m going to (mis-)appropriate as a description of how I eat, namely, grazing and rooting around in likely looking (often dark & dank) locations for sustenance or when dipping into the unknown delights of various identical street food containers.

It also (and more accurately!) refers to the practice of leaving the pigs rooting around in the forest and woodland for acorns, chestnuts etc. Often this was a right or privilege granted to local people on the common land or within royal forests. Occasionally, their owners would even, er, “encourage” the nuts to fall for their animals 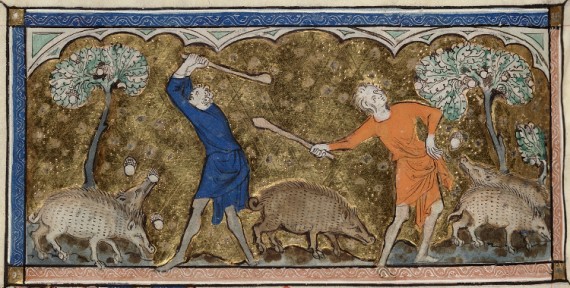 Especially in the eastern shires of England, pannage was so prominent a value in the economic importance of local woodland that it was often employed, as in the Domesday Book (1086), as a unit of measurement. Customarily, a pig was given to the lord of the manor for every certain number of pigs loosed de herbagio (as the right of pannage was described).

Pannage is no longer carried out in most areas, but is still observed in the New Forest, where it is also known as “common of mast”. It is still an important part of the forest ecology and helps the husbandry of the other New Forest livestock – pigs can safely eat acorns as a large part of their diet, whereas excessive amounts may be poisonous to ponies and cattle.

The minimum duration of the New Forest pannage season is 60 days, but the start date varies according to the weather – and as to when the acorns fall. The Court of Verderers decides when pannage will start each year.

At other times pigs are not allowed to roam in and on the forest, with the exception that breeding sows (known as “privileged sows”) are by custom allowed out, providing that they return to the owner’s holding at night and are not a nuisance. The pigs each have several nose rings clipped into their noses to prevent them rooting too much and causing damage to grassland. (Wikipedia)

It’s important to remember that the pig has always been hugely important for the poor, the peasants, the rural inhabitants. Pork was often the only meat easily — and more importantly legally (deer & swan being off-limits unless you wanted to risk being hung or have limbs removed) — available to them and even as recently as between the two World Wars, it was commonplace for people to keep a pig at the bottom of their gardens for their own consumption.

I guess that the current posh rich boys in the government will make following this fine example of self-sufficiency and as a hedge against starvation, into a serious and prison-time earning terrorist offence pretty soon…