Blimey, that’s some measly pork you’ve got in your hand there!

Thanks are owed to one of the reader’s of this site, Gay — daughter of a butcher — and a friend of Val’s, whose mention to her of “measly pork”, resulted in me diving energetically down into yet another warren of dark, twisty, (and really rather quite smelly actually) Internet passages, to research what this was. Gay recalled hearing it said by her father and the customers in his butchers’ shop, as most definitely something to be avoided when buying pork.

It turns out that ‘measly pork‘ has been a description given to worm-infested pork for hundreds of years. I’ve not yet found any definitive mention when it was first used and I wonder if knowledge of the problem (if not the cause) may actually have been the base reason for the prohibition of eating pork in so many ancient religions? It’s called ‘measly pork’ because the worm larvae that have taken up residence in there, show up as a rash of red dots on the surface of the meat. And as the first systematic description of measles — as distinct from smallpox and chickenpox — only appeared with the Persian physician Rhazes (860–932), who published his “The Book of Smallpox and Measles” around then, we could safely hazard a guess that it shortly afterwards entered common currency as a way to describe this, hitherto, nameless problem…

Here’s a wonderful old document called “On the measle of the pig: and on the wholesomeness, as food for man, of measly pork” by Alexander Fleming (no, not that Fleming), dating from 1857 that attempts to define and explain the various stages of infestation and the various effects (inc. visual) on the meat:

The measle of the pig, Alexander Fleming 1857


Trichinosis is a parasitic worm disease associated with undercooked pork but it can also be acquired from eating any animal that is not strictly vegetarian. Whilst occasionally fatal — and often debilitating — most sufferers recover completely. Whilst it’s been pretty much eradicated in the West (and that’s especially important in e.g. Germany with their traditional raw pork dish, Mett — a nation who, like the Japanese with their Torisashi, raw-sliced chicken sashimi — seem to like living dangerously*) but is still occasionally found in those free range pigs running around on smallholdings and farms, and in other less intensively developed countries, as the outdoors raised porkers are more liable to come into close contact with rodents and other wildlife, increasing the probability of them acquiring the Trichinella infection.

From the US — and thus not likely to worry us overly much here on the other side of The Pond — comes the detail that undercooked bear is the most common source of infection and there, they also recommend that walrus, raccoon, horse, cat, dog and any other omnivorous or carnivorous animals chosen to be the ‘protein source de jour’ are cooked to an internal temperature of at least 65°C. A rather ‘varied’ menu, as you can see and I guess this cooking advice would apply equally as well to anyone essaying a piece of ‘long pig’...

[* That said, this is a measured article on the actual risks of putting Japanese raw chicken into your gob]

Reading through “The North American Magazine, Volume 3″, (the oldest literary magazine in the USA and still being published) I come across this detail: that measly pork caused leprosy. Who knew?

And in “The practical cook, English and foreign“, by J. Bregion and A. Miller (freely available for download)


one can read this description of how to identify ‘measly’ pork along with other, still extant, handy shopping notes, to save you from being conned out of your hard-earned by an unscrupulous vendor… 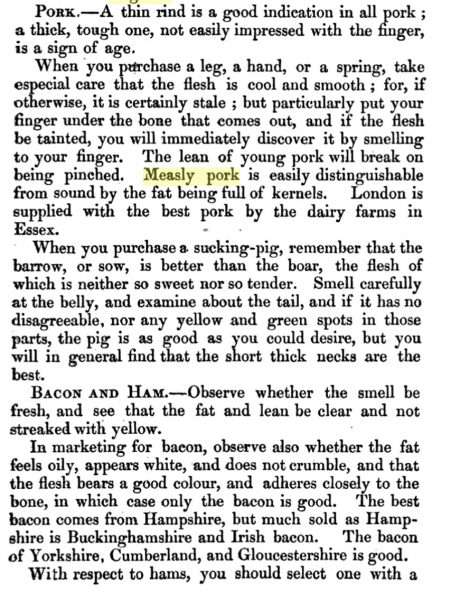 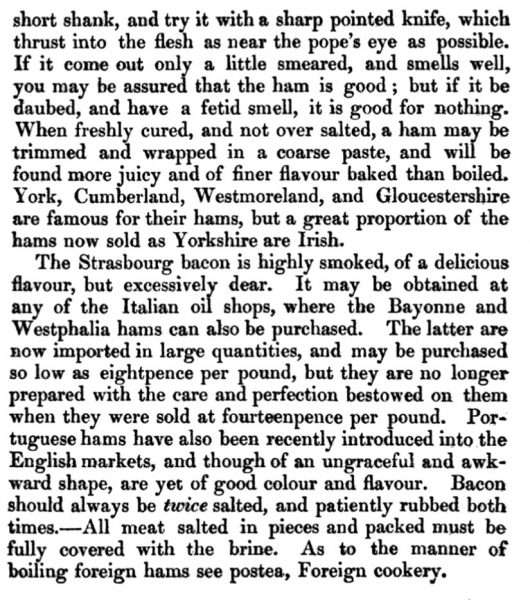 The whole book is worth some of your time as a snap-shot into the foods & methods from that period.

Whilst researching this piece, I further stumbled over the book “Parasites: Tales of Humanity’s Most Unwelcome Guests” and reading the blurb…

“Hidden away within living tissues, parasites are all around us—and inside us. Yet, despite their unsavory characteristics, as we find in this compulsively readable book, parasites have played an enormous role in civilizations through time and around the globe. Parasites: Tales of Humanity’s Most Unwelcome Guests puts amoebae, roundworms, tapeworms, mites, and others at the center of the action as human cultures have evolved and declined. It shows their role in exploration, war, and even terrorist plots, often through an unpredictable ripple effect. It reveals them as invisible threats in our food, water, and luggage; as invaders that have shaped behaviors and taboos; and as unexpected partners in such venues as crime scene investigations. Parasites also describes their evolution and life histories and considers their significant benefits. Deftly blending the sociological with the scientific, this natural and social history of parasites looks closely at a fascinating, often disgusting group of organisms and discovers that they are in fact an integral thread in the web of life.”

…ordered a copy there and then. It’s both fascinating and shudder inducing, in equal measure.

I’ve actually decided against describing the effects of ingesting the encysted trichinella larvae; not through any squeamishness but just that I’m not medically trained, this isn’t a site writing about medicine and there are a lot of authoritative references out there if you need to know. And then I suppose the obvious question is: “what did you do wrong, that you need to know”?

If you follow the advice on this site, you know not to buy meat of unknown provenance from supermarkets, dodgy door-knocking spivs with unlabelled plastic bags of unknown origin — and unknown animal — pulled out from the back of an unmarked van or other similar disreputable sources. No, you’re much smarter than that aren’t you? You’ll have sought out a good butcher (like Gay’s father) or a local farmer, one that you’ve come to know and trust and from whom you buy your ethically bred, kindly husbanded and painlessly killed meat. Safe therefore in the knowledge that those bloody larvae aren’t going to burst open inside your gut, like some junior version of the chest-burster from Alien, no Sirree Bob! No, you’re safe. Enjoy your joint… 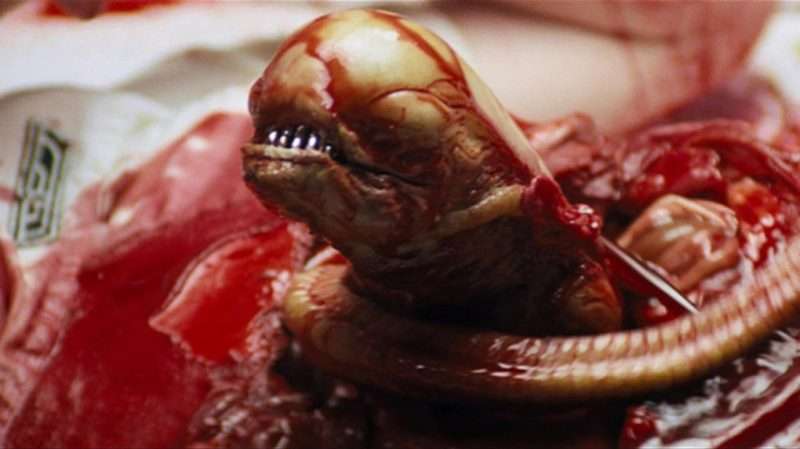 And finally? “There’s NOT plenty more fish in the sea”. I saw this BBC piece today about a good, apparently well respected fish & chip shop that had decided to get out of the trade, as they were less than happy that the fish they were using were actually sustainable or that they could justify using fish on environmental grounds anymore.

Owner Aatkin Anadkat was quoted as saying that “he understood there might be those who suspected the restaurant was actually being closed for business reasons.” He went on to say:

“There is more than one reason – as with most things – but I’ve learned along the way that if something doesn’t feel good, then you shouldn’t do it.
“We’re not going to be opening another site but we’re certainly in the plant-based food business and it’s a nice place to be.”

Good for them. Their ‘Closing Down’ sign makes good reading. 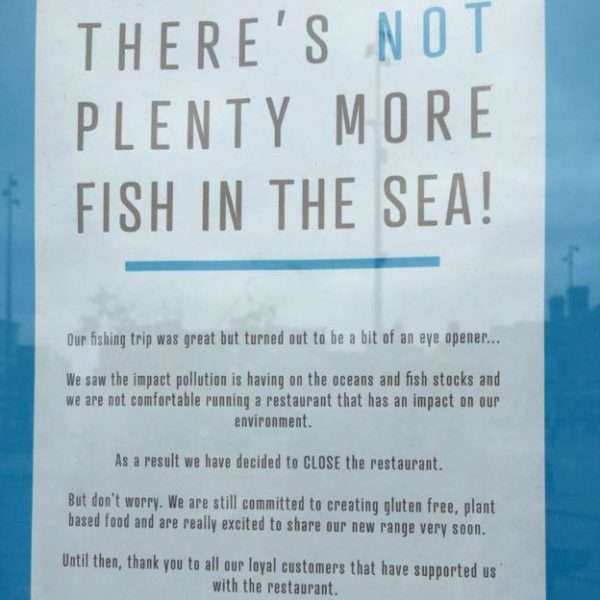