I wonder if — the frankly stone-crazy — Ben Carson would group the original pigs that “colonised” American under that same ‘involuntary immigrants’ category? After all, if he can double-down after calling slaves ‘immigrants‘ then I’m sure his craziness knows no bounds. Released originally by Cristobal Colon who left 8 pigs — documented in the manifest for his 2nd voyage — after making landfall in Cuba, their onward journey was further helped by De Soto, who after picking up 13 of their descendants, then in turn made landfall in Florida in 1539. And from this little band all the rest are descended. 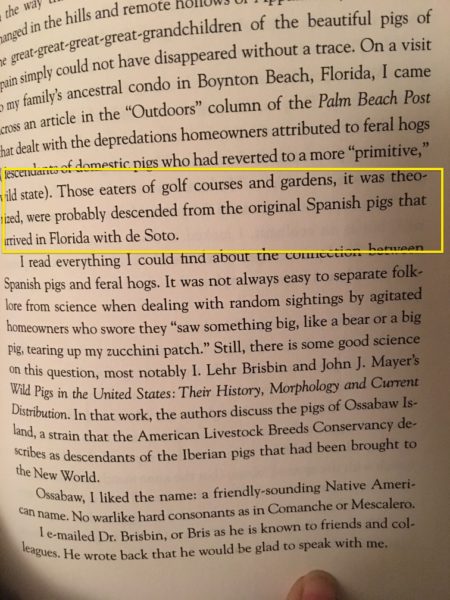 Then there’s the ‘involuntary immigrants” from France to England; the Charolais cattle, who i̶n̶v̶a̶d̶e̶d̶ migrated to us in the late 1960s and early 1960s; we didn’t seem to put up much of an effective fight there. But whereas there were no native American pig (Suidae) breeds to be ‘contaminated’ by the Spanish porcine invaders, here we have had centuries of — at times chaotic & unstructured, I admit — breeding of native species.  The Charolais were introduced because their growth rate is faster than these traditional breeds and they produce more edible i.e. profitable meat (a higher ‘killing out percentage’). But that means there’s less fat. Thus less taste, less depth of flavour. More just plain hunks of bland. I’ve written about this problem before.

The recent Observer Food Magazine 50 Awards talked hugely approvingly of an old English heritage breed, the White Park. One that during WWII, was held to be so important to the UK’s heritage that two in-calf cows and a bull were sent for safe-keeping to New York. 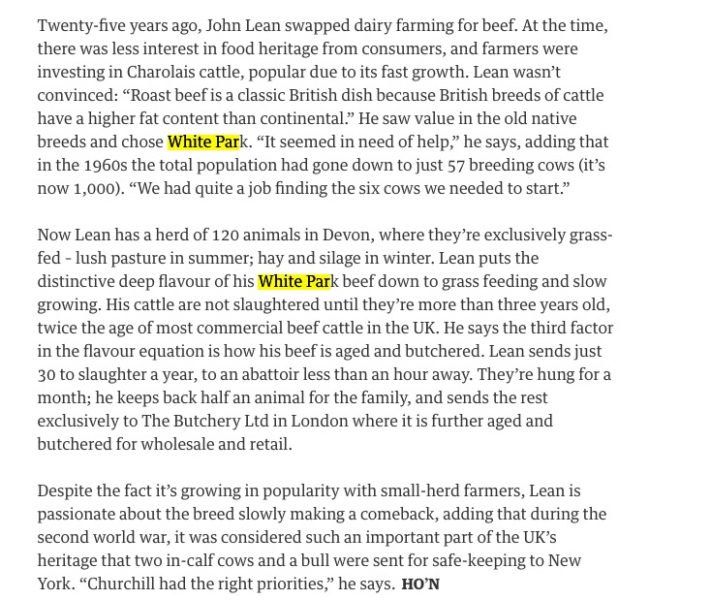 Slower growing, fat marbling for huge flavour. A A Gill (sadly departed) said of it in a Sunday Times piece

“The white park, a breed I’ve never eaten before and had always assumed was purely ornamental, was really excellent: softly chewy, with that strong, distinctive, almost corrupt flavour of proper beef … it was the best steak I’ve had this year”

So what am I arguing for here? Less immigration? Fatter immigrants? More immigrants? In the case of our fellow human beings, more immigrants of course. England (and indeed every country that’s welcomed immigrants of whatever shape, hue, colour, persuasion) have benefited enormously from them. It’s a symbiotic relationship, not a parasitic one, despite what the Carsons, the Farages, the Mays and the Le Pens of the facist world would have you believe. The collective gene pool (not just the physical one but the cultural and societal ones) gets a huge, welcome, influx of stimulating new ‘blood’. The community becomes stronger, more diverse and, ultimately, more accepting of “different”.

In the case of the foreign animals? Big, juicy, old, fat ones. Of course. Just don’t let their use be to the detriment of the native breeds; like the humans, they can (and should) live in a harmonious, diverse, healthy, whole. A complex ecosystem is a healthy & self-sustaining one. More diversity please. Fuck Brexit. Fuck The Orange Stain. Fuck intolerant bigoted Nazis.

“Strange to see how a good dinner and feasting reconciles everyone.”

And finally? Finally, one of the earliest recipes that mentions pork and sausages via The British Library.

Take Piggs yskaldid and quarter hem and seeþ hem in water and salt, take hem and lat hem kele. take persel sawge. and grynde it with brede and zolkes of ayrenn harde ysode. temper it up with vyneger sum what thyk. and, lay the Pygges in a vessell. and the sewe onoward and serue it forth.

Take pigs scalded and quarter them and seethe (boil) them in water and salt, take them and let them cool. Take parsley, sage, and grind it with bread and yolks of eggs hard boiled. Temper it up with vinegar somewhat thick, and lay the pigs in a vessel, cover it with the sauce and serve it forth.