Another long post, inspired by a quick Tweet from food writer & NHS doctor, Aaron Vallance, who, back in November, posted a shot of his evening banana custard…

…a shot that prompted an immediate flashback to the very same item that my Mum used to prepare for pudding, for all us kids,  Pudding, mark you, not dessert. (And the midday meal was dinner. Not lunch.)

Banana custard was simple, cheap, easy, tasty. With 5 kids as well as herself and my Dad, these are important benefits. My Mum wasn’t a great, cutting edge, innovative cook in the way that I see some others rhapsodising about, yet, everything (apart from the powdered mash debacle which you can read more about here) was cooked well, used all the bits to best effect and managed to keep us all growing up healthy and fit.

I don’t know whether she and Dad ever missed a meal or had much less to eat than us, although I strongly suspect now they sometimes did, but I don’t ever recall going hungry. (I do however remember vividly, us all hiding under the bed, being told to “stay quiet” when the milkman came knocking at the front-door, to get his bill paid one day…). And we were eligible for school meals, so had those little dinner tickets, pink ones in Kent, rather than green (and I’m pretty sure they came from the same supplier who produced the cinema tickets of that time)… 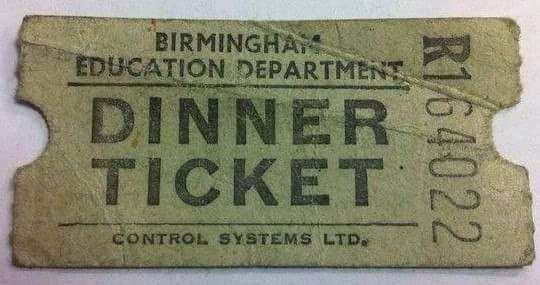 …that you had to pass to the, often intimidating, dinner lady. I remember, it was kind of embarrassing at first. But after a while, just a background bit of the days’ landscape, you thought no more of it. I’m told now, schools are usually more discreet about how & where they’re handed over. But then, there are a lot more kids eligible for FSM now, so it’s harder and thankfully less acceptable now to stigmatise a whole class for the crime of “being poor”; the relentless, pitiless, cruelty (by design and philosophy) of the savage Tory cuts with now, of course, the additional carnage that both Brexit & the ‘Rona has wrought, has seen to that. 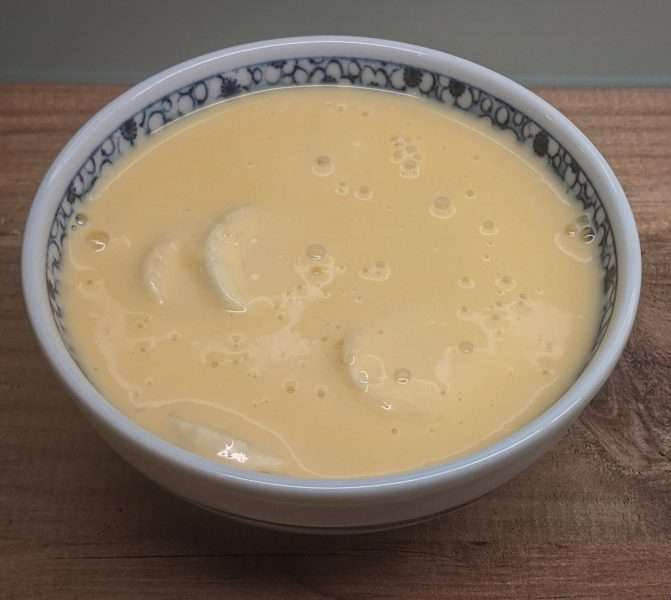 I’m also sure I’m not alone in recalling the pleasure of being that kid allowed to scrape the burnt bits from the sides and bottom of an oven dish that had been used to cook maybe a cheese & potato or fish pie or a corned beef hash. I still do so love those glued-on bits as, later on, we were to discover this same taste delight in the blackened rice left at the bottom of paellas & tahdig and Chinese guoba. Did you know that there’s a whole Wiki page dedicated to “scorched rice?”

The sight of Aaron’ banana custard reminded me both of our school meals, where that was one of the pudding items (with a thick skin on the top, impenetrable, skin that resisted attack by spoons) they doled out — and of course, there’s a whole book to be written about that subject but this isn’t it, at least for now — and my two favourite plates of food as a kid: sausage, chips & beans or the Sunday roast.

The former remains a firm hit. It’s one of those very English ones that has everything just right: textures, tastes, smells, all gelling. I’m not sure what I’d ask for on my last night on death row, but that’s close to the top.

And whilst the latter meal has waxed & waned in regularity terms, I’ve cooked them innumerable times, I’ve eaten them at other peoples’ houses, girlfriend’s Mums have tried to ‘feed me up’ with them; some were good, some great, some quite atrocious, I’ve had interesting variants when eating them abroad, have splurged on those ones in wallet-gouging London restaurants and equally, enjoyed the inexpensive ones we’d eat with Val’s Dad, at the pub just down the road that he was accustomed to eating at. Where everyone knew him. And for him, as he got older, became less sure of himself, as his hearing got worse, this meal was safe, reassuring, unchallenging but comforting. Hugely comforting. And that’s important. Food is many things but often mainly comfort.

Years later, both my two kids remember being looked after by my parents but most especially they remember Bar, my Mum, cooking these same foods for them. Again, it’s the comfort of the food. The simple “spag bol” with bread-crumbs used in the sauce to help bulk it up. The scrambled eggs on toast, the exact consistency & texture of which I consistently fail to replicate to their satisfaction. Every. Single. Time. As they would always tell me. And, of course, the dish of banana custard. No hard skin on that one from Bar. And all of them, multi-generational markers, all of them talismans, promising that — whatever the day had done to you, whatever you’d had to endure, whatever disappointments you’d suffered — here, here at the table, with these foods in front of you, here you were safe, here you were nourished, here you were loved.

I had another vivid memory last night of my grand-parents, who we nick-named Pop & Dot. I’d taken some French grey poupon mustard from the ‘fridge, plonked it into the sauce and then licked the spoon, biting down on the little grains left behind. And was instantly transported back to eating Dot’s cooking aged, I don’t know, maybe 6 or 7, and, wishing to be seen to be grown-up, spooning that same type of mustard onto my plate and remembering then how different and exciting and exotic, sharp, vinegary it seemed in comparison with the yellow Coleman’s that was all that was on offer at home (I remember my Dad telling me that Mr Coleman made his fortune from the mustard that we left on the side of the plate…). I can’t in all honesty claim this mustard moment turned me into a gourmand from that date on, but it’s a strong Madeleine moment. 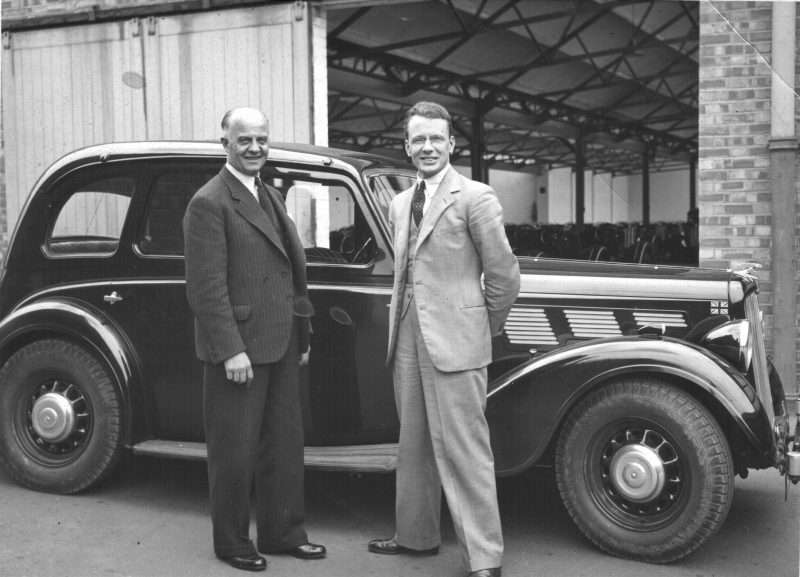 By the time I was old enough to really remember them, Pop had retired as a director of the old Morris Motors. They’d moved to a (to us) huge, new, ‘executive’-style house in Beaconsfield, with large, mainly manicured to within an inch of their lives gardens, except at the far end — before it came to the boundary fenced meadows — where there was a real fruit orchard, all of their own. Fruit pies, fruit preserves, jams, fruit & cream. All from that space, one that seems to stretch for hundreds of yards in my memory, but probably wasn’t.

Dot was to carry on working as head of catering at Earl’s Court (as part of the old Gardner Merchant team, long before they they were gobbled by the horrendous Sodexho behemoth who later went on to screw over free school meals kids) for another decade or so.

I didn’t realise then what a big deal it was, having her, a woman, in that position, at that time. For me, it just meant I got to eat at the Earl’s Court senior managers table and, later on, getting free back-stage passes for gigs by David Bowie & The Stones & Floyd.) Dot was a really good cook; regular car trips across Europe with next-door friends (one Austrian by birth) meant that they’d seen and eaten and enjoyed & brought back in the boot, large quantities of “foreign food” (and wine) long before that really came to be an aspirational thing for the rest of suburban England. I can recall seeing a bottle of olive oil being used regularly in their kitchen, no longer just something you’d store in the medicine cabinet for glue-ear. And her cooking, esp. of Austrian and German breads and dishes was fun to explore. Again, I don’t think I realised how lucky I/we were. It was just a thrill to visit them, to sleep there and, on occasion, to be taken into town by Pop, to buy me some new school clothes from the men’s tailor in the High Street and then, always, walk next door to a tie & tailed, silver service waiters’ restaurant (both long gone now I guess), to have “the full mixed grill – as usual – please”.

Without their help and money, I’m not sure if Mum & Dad would have been able to cope as well as they did. Regular ‘loans’ — never to be repaid of course — kept the Bulow ship afloat, deck just above water, even if it always remained slightly holed below the water line. Five kids, remember and a farm worker’s wages.

And one final personal memory from those days: the delight of a tin of Carnation condensed milk, simple one-handed can-opener pierced twice, slowly poured over a plate of (tinned) fruit salad.

“Carnation Milk is the best in the land / Here I sit with a can in my hand / No tits to pull, no hay to pitch / You just punch a hole in the son of a bitch.”

And the apology? To Pop & Dot. To Bar & Bern. That I didn’t tell them how much I loved them. Or how grateful I was for everything that they’d done. For their selflessness versus my selfishness. For taking them so very much for granted. It’s an apology that is years too late but no less heartfelt and true for that. And the main regret is not being interested in them, not asking to hear about their lives, their hopes and fears and experiences and losses. I miss that knowledge, that link. My loss but I hope it didn’t hurt them too much. They’d never have said of course but I think sometimes that I feel that disappointment…

I’ll end with some words that hit home, from Louise Benson, a writer and editor who you can find on Twitter and Instagram.

And that’s all the maudlin shit done with now, honest. Thank you for coming to my TED Talk.