“It was market-morning. The ground was covered, nearly ankle-deep, with filth and mire, and a thick steam, perpetually rising from the reeking bodies of the cattle, and mingling with the fog, which seemed to rest upon the chimney-tops, hung heavily above … Countrymen, butchers, drovers, hawkers, boys, thieves, idlers, and vagabonds of every low grade, were mingled together in a mass…”

This is Charles Dickens’ writing in Oliver Twist, describing the livestock market in Smithfield in 1838.

Seventeen years later, the rising tide of injuries and deaths from wayward loose cattle stampeding through the narrow streets of The City, meant that the trade in live animals based here was forced by the outraged & understandably fearful neighbours, to move further north, to the (then) open spaces of Islington.

You get an idea of how close-packed & teeming then were the streets, from this map of 1827. 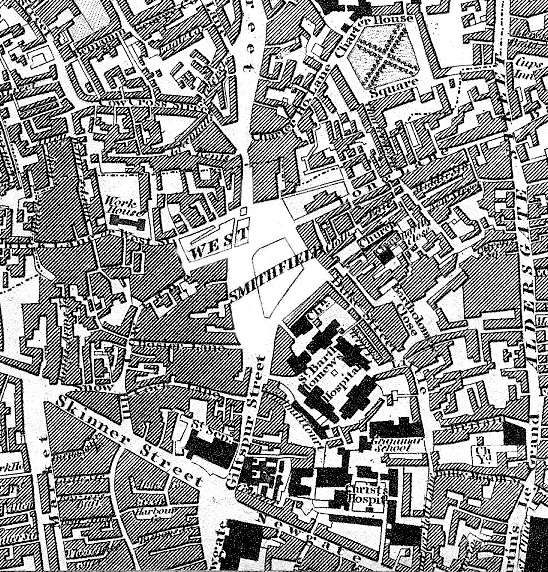 Scan of the Greenwood map by Mark Annand, who kindly gave permission to redistribute this portion of the map under a CC license.

The area hasn’t lost that dense, closed-in feel — despite the best attentions of the Luftwaffe, banksters and slick, rich, politician-owning developers — and has managed to stay more than a little chaotic and un-managed. As the only wholesale market left in Central London (long gone now to the suburbs are the others, such as Billingsgate) I really hope that continues. London is being sold, lock, stock and barrel, to oligarch & criminal hot money types; let’s try and keep a few areas that aren’t sanitised and surveilled to within an inch of their lives. Or death, if you’re an enemy of the state…

So it was that in 1868, the new, permanent meat market at Smithfield was formally opened as the London Central Meat Market designed by the rather wonderfully named Architect & Surveyor to The City of London, a Sir Horace Jones, whose most famous work — at least for the rest of the world — is most certainly Tower Bridge, although he was also responsible for the design & construction of a huge number of buildings over the course of his 23 years, inc. two other London markets, Old Billingsgate and Leadenhall.

These beautiful buildings stand above a warren of former railway tunnels. By necessity for thousands of years, live animals had been brought to markets “on the hoof”, to be slaughtered there, in situ, but from the mid-19th century onwards they started to be brought by rail and they didn’t have to arrive alive because the journey time was now so reduced. The construction of extensive railway sidings, beneath what was Smithfield Park, meant that porters could transfer the animal carcases straight into the cold stores and then directly up to the market via lifts.

These sidings closed in the 60s as the line fell into disuse — and are now used as a car park, accessed via a cobbled descent at the centre of Smithfield Park. There’s also a lovely cobbled ramp spiralling down around West Smithfield’s public garden on the south side of the Market, providing access to part of this area. Interestingly, some of the buildings on Charterhouse Street on the north side of Smithfield can still gain access to the tunnels via the basements.

Over the years, some of the former meat market buildings have been re-purposed. The former Central Cold Store, on Charterhouse Street is now a co-generation power station whilst partygoers heading for the Fabric nightclub might be surprised to learn that it is also housed in former cold storage warehousing. Although maybe not on reflection — clubs have always moved into the interstitial spaces as that’s where rents are cheapest and where the most interesting people hang out.

I’ll cover Spitalfields market much more in a later piece but having seen this, just had to put it in front of you now; a contemporary description of the “fad and Lamentable” poisoning of 16 people there in a meat victualers shop by “fome wicked and Devilifh minded perfon” … Nothing’s changed in the area then, eh? Except now it’ll be some bearded hipster found to be the villain of the piece. 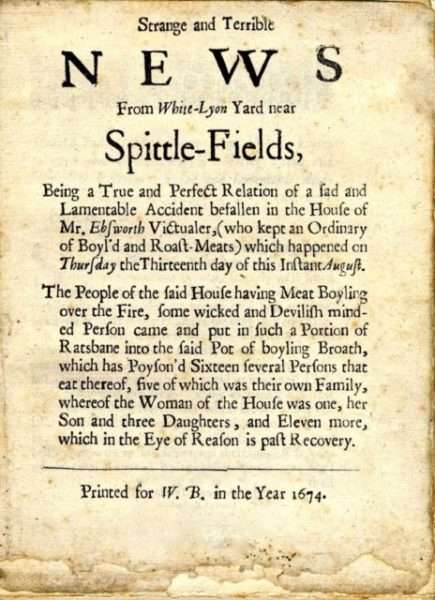 So, Smithfield market? It was to this monument of Victorian vision and practicality that I often headed, many years ago; its ornamental and coloured cast iron probably as well known to me then as the gold crusted figured dome of the Old Bailey, which slyly seems to peek out from along the periphery. I hasten to add that I was never required to attend the latter.

The area was home to a very small number of pubs that were licensed to open almost all-night and early in the morning (but most importantly, after the normal pubs had long closed; remember, this was ages before 24-hour opening was even a small light over the horizon. We’re talking the drear 1970s here..) for the benefit of the bummarees or market porters to grab a warming rum hot toddy and come in from the cold — cold coming both from the often legendarily bad London weather as well as that bone and finger chilling cold, emanating from the fridges and the great huge slabs of frozen meat worked on.

By 7am or so, the market was more sleepy and a lot of the workers had gone, discarded Styrofoam takeaway cups quietly filled with rain and the fascinating litter left behind from a long night of work, beplastered the slowly soddening streets. Wooden pallets had been packed away, lights within started to dim, as those now unstoppable yawns start to set in and the sun slowly broke through the clouds and watery skies.

We’d stagger out, sometime in the early hours to catch the night train, or if we were staying In Town, maybe around 6 0r 7am. By then the commuters, City workers, had started coming into London. They looked at us strangely. We were as alien to them as were the porters. A different world. Almost a palimpsest of occupations layered over this centuries old area.

At Smithfield the working day would start with orders being prepared for the pubs and hotels, with deliveries and shop displays and, of course, with “the breaking down” – dividing carcasses into those recognisable cuts of meat, “busting them down to their primals”. This was and is still a predominately male world. There a man was never without a hatchet or a knife, or a lump of meat, working skilfully amidst blood and bone and flesh, carving to extract the perfect cut. It’s a world of naturally affable men, born storytellers whose constant banter is as rich and as succulent as a belly of pork, a world where birth names are inevitably replaced by nicknames.

The names remind me a lot of the pseudonymous list of permanently banned customers maintained by the staff of the Half Moon pub in Herne Hill in south London; their colourful descriptions are a thing of beauty. 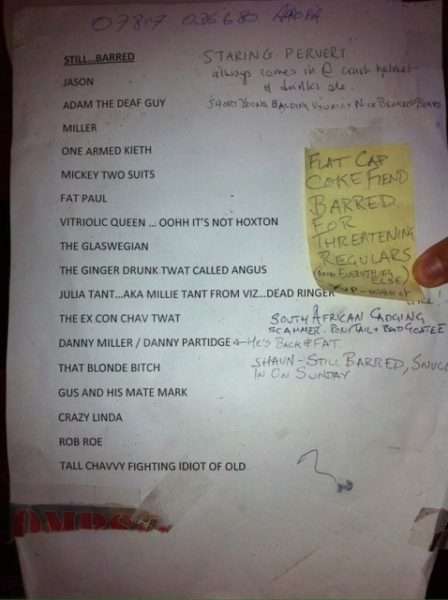 I’d love to know the story of “Mickey Two Suits” or “One armed Kieth”. Wouldn’t you?

Let’s finish by talking about the wonderfully named 68-year old “Biffo” (aka Johnny Griffiths) so called because he could, in his own words, “handle himself”. Even at 68 he looks a bruiser. He’s worked there for nearly 50 years. Man and boy. Man and boy.

“I can chop a pig down and cut it up in five minutes. Legs, shoulders, loins -–all done proper like. It’s an art. Chopping a pig down’s an art.”

Biffo bemoans the modern generation. “Once us old ‘uns go, it’ll be stone dead in there,” he says. “This generation, all they want to do is put gear up their nose”.

Hard to argue with that. I’m not sure he’s 100% right though — there’s a whole new set of butchers taking up the mantle who will, hopefully, keep this skill and tradition going.

“And one last thing”. Well, actually, two this time.

2. Next on our “must visit list” is Blacklock run by Gordon Ker, in Windmill St, Soho. Really he only does chops, but “only does chops” in the same way as “bees only do honey” i.e. superbly well, dedicated, one-track mind, knowing nothing else. 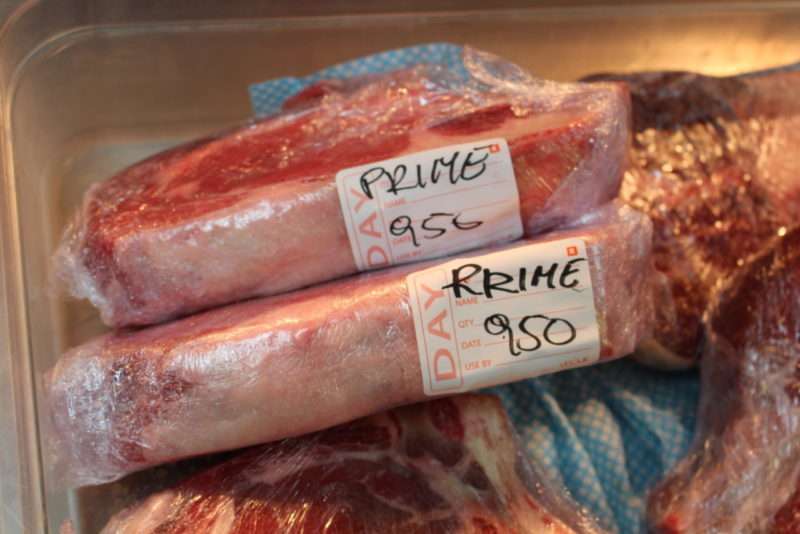 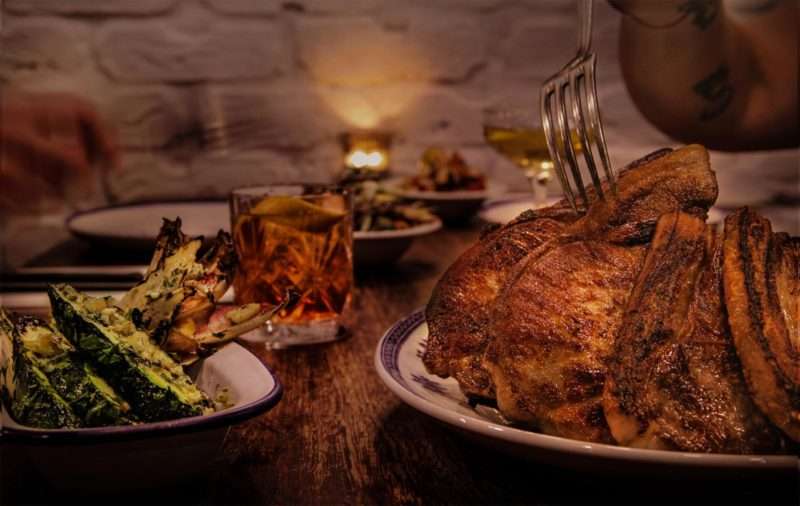 What’s not to like? Not a place to spend hours at, but who cares, it does one thing, well. That’s good. Even Jay Rayner agreed.