“Call it cheap food; not fast.” I’m not a Grauniad food writer…

…and when you read these two articles, you’ll see that I have some way to go before I am. But that’s OK; they speak about — far more adroitly than I — things I’ve said before. So, read their pieces as well as mine. You won’t regret the slight diversion from my own ramblings. And I’m only a slight, little bit jealous of their undoubted expertise as fine, fine wordsmiths.

The first, shorter, piece by Barbara Ellen in today’s Observer, eloquently calls out the use of the term “fast food”, too often used as a synonym for “lazy, feckless poor people, endangering their health and that of their children” food and the subject of moral judgement & derision by the chattering classes. Instead she suggests, that by substituting “cheap” for “fast”, the reality of why this type of food is bought is highlighted. As Barbara says:

“Fast food denotes automatic judgment and stereotyping of the consumers – it becomes their fault for choosing fast over quality. By contrast, cheap food tells a fuller (fairer) story and one that at least acknowledges a harsh economic truth – this type of food (fast, junk, but above all cheap) could be all that broke, harassed people can afford.”

Income inequality does not just affect our food supply chain; our food system is built on such inequality and requires it to function, at least far as it’s currently composed. The many contributing components of this inequality — the overt or covert racism, the lack of access to capital, low wages exploitation, loss of small-holders land, nutritional and health disparities in poor communities and those of ethnic or social minorities, to name some — are tightly bound together. And note that our continued, ongoing obsession with food and chefs has neither expanded and widened access to high-quality food nor significantly improved nutrition in these same low-resource neighbourhoods. 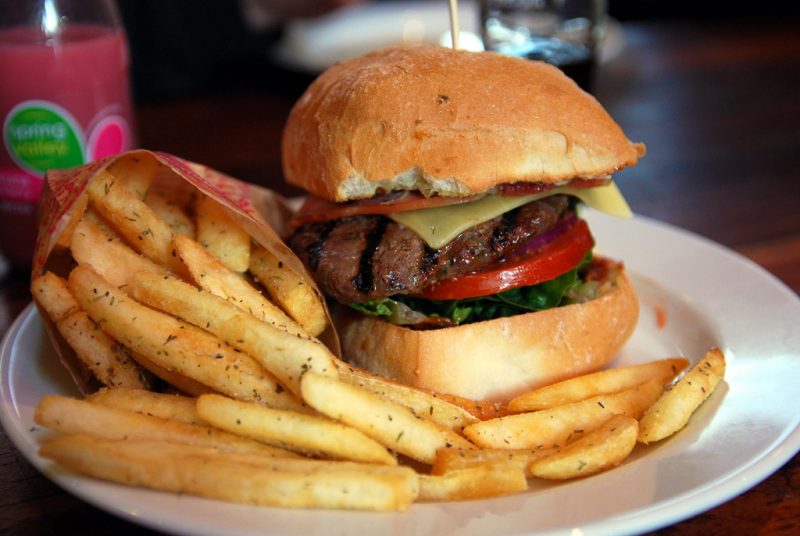 When as locavore food fans, we wonder whether a pork chop tastes better if the pig ate corn or nuts but we don’t ask or talk about the people who worked in the slaughterhouse where it was processed, we are creating a kind of theatre where we encourage others to suspend their disbelief whilst eating. And that’s insane. The “farm-to-table” idea is now the preserve of corporate PR teams and those Instagram/blogger “influencers” that we all despise. And that subversion and subsuming of those original ideals is a deep, deep shame as the tenets of localism, care for the environment, the farmers and workers, from which it all started, was originally totally on point.

“Hipchips” anyone? I’m not picking on them particularly. But as an example of the foodie focus being so completely far away from the sharp-end, away from where it really matters, and was one I saw yesterday in London, it’s being posted as an exemplar of what I’m talking about here. Sorry potato people, I’m sure the food is good but… 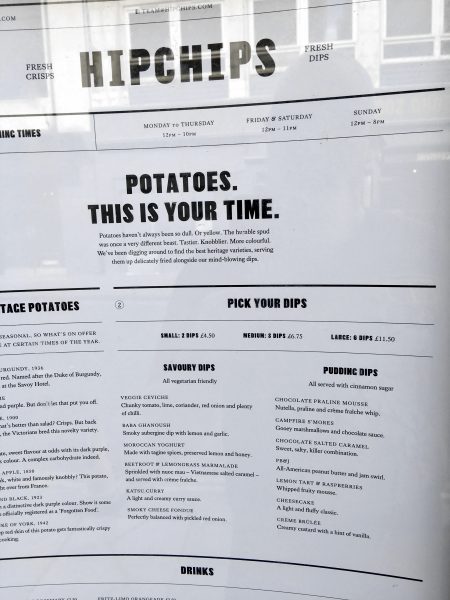 And in the second piece, coined by Jay Rayner — one that I think everyone should read — you’ll hear, inter alia, an acerbic, stringent, trenchant rebuttal to that kind of “farm-to-table” mystical thinking espoused by a movement that has now strayed far from any useful measure of judging how well our country is treating the animals, the workers, the land and the farmers, that it was so keen to push forward with. 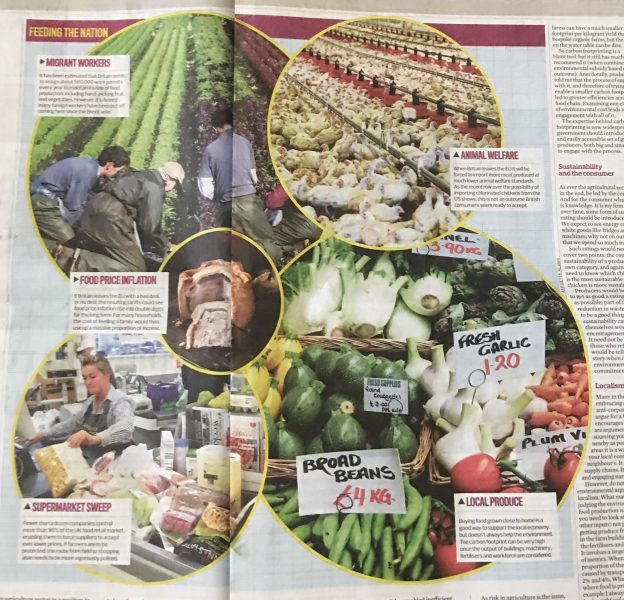 Read his article; it also talks about a lot more than just this particular strand on food and policy though; in a sane, balanced, well researched manner, one that is the direct antithesis of the hysterical calls to phoney patriotism and out and out lies as vomited forth by the Brexit fire-starters. It’s based on much of the detail in his 2013, “A Greedy Man In A Hungry World”; you should probably order that one and read it as well. Oh, and that he takes massive chunk out of the flabby, pink flesh of the abominable, obnoxious little shit-weasel that is Michael Gove is just one (albeit excellent) added reason to read it in full…

And finally? Finally, how about getting surplus food direct from local stores to charities for free? That’s what the FareShare FoodCloud is already doing and you can take advantage of it in your local area. So, if you are a charity or community group that uses food to support people, you can sign up to FareShare FoodCloud and collect good quality, surplus food from Tesco stores (and shortly Waitrose too) for free. Head to this page straight away to get started… 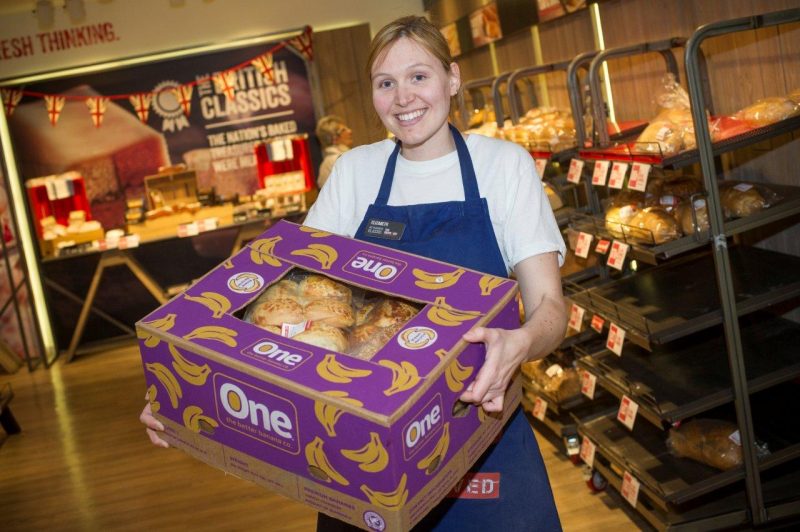 “It went well and the food was superb, particularly the fruit and vegetables, which we always are desperately in need of.”

And finally, finally for today? I’d commend you to the pages of  a subscription magazine called “The Land”; “an occasional magazine about land rights”. It doesn’t make for easy reading if you believe in the capitalist system; but then if you’ve stayed with me this far, you probably already have your suspicions about the validity of this as a good idea anyway, don’t you?

And to quell any remaining doubts about how good this magazine is? One of the pieces (“Safe European Home“) is named after a Clash song for fucks’ sake. What else do you need to know?

This is a fine use of £24 of anyones money. So, subscribe here…

UPDATE: apparently they’re not currently accepting new subscriptions or renewals, but you can still buy the new issue here. 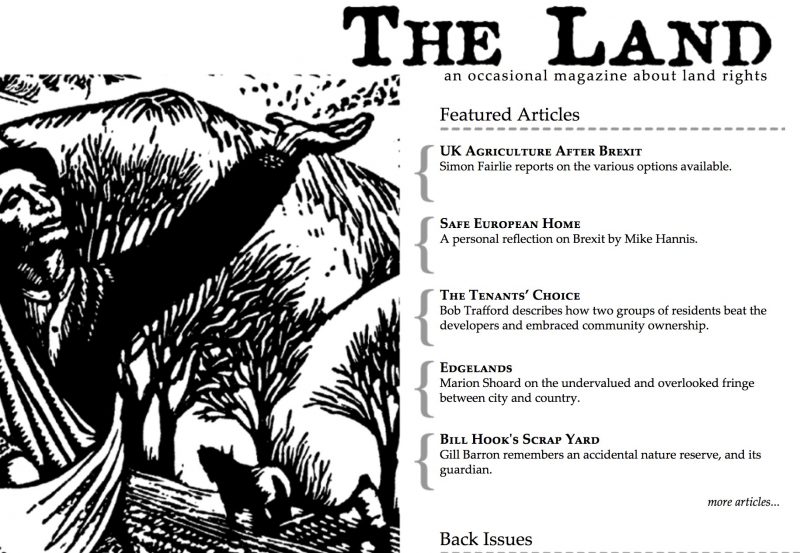