Not a strictly pork or pig related post but it’s such a fascinating piece that I decided to include it anyway. And fermentation is so much part of many of the processes used in preserving or curing pork (or in the bits that accompany it sooooooo well — think beer, wine, bread, soy sauce and pickles) that it’s not such an outlandish stretch of the imagination after all…

Turns out that some of microbes in the human gut effectively altered our chemistry (and theirs) to allow them and us to process and eat yeast. The full piece is here (from Nature) whilst a more (to me anyway) easily digestible (sorry!) summary is here.

Of course they would; even when swearing, Italian sounds as though it comes from the mouth of angels, rather than the hacking throat clearing from those rough Anglo-Saxons in the North and this word roughly translates as “pillow“. Which some people seem to think somehow sounds less offensive than “face bacon”. I suppose they might be right…

But then part of the problem with modern food buying habits is that the whole process has been removed from its sources and roots; so much so, that people who buy meat from a supermarket may actually have no clue from what part of the animal the joint or meat section actually emanates.

And that’s just plain wrong. At least if you buy from a proper butcher (not just one that re-packages meat from some other source further “upstream”) you can see him or her breaking down the carcase, then cutting those pieces in turn into smaller sections to produce the cuts with which we’re all familiar.

Face Bacon is similar to the US “jowl bacon”. And to Bath Chaps, a regional speciality which result from using just the lower half of the cheeks. When Jane Grigson wrote her hugely influential “English Food”, account of British cookery in the 1980s 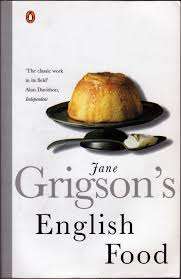 they were available from only one source, a supplier of cooked meat in the city’s covered market. Their version, coated in breadcrumbs, was cured like ham. It’s still sold there today but now it’s also become a bit of a staple in a number of the smarter (in intelligence & “chops” terms) chefs kitchens in and around the area.

So, this is the third time I’ve made face bacon in the last couple of months, but it’s the first time I’ve actually remembered to photograph the few stages necessary along this road to pork heaven.

I followed the very simple guide in my Holy Grail of smoking & curing already referenced (for those whose memory like mine is shot to hell, it’s by Steve Lamb and it’s called, unsurprisingly, “Curing & Smoking”).

The cure is made of a 50-50 mixture of pure dried vacuum salt and brown sugar (I use molasses but it’s entirely up to you, as are the rest of the ingredients) plus a handful of bruised juniper berries,  a couple of torn up bay leaves, another handful or two of crushed black & red pepper-corns and some mace. Mix it up roughly in a bowl, then distribute a layer across the bottom of your curing tray (I use the salad container in my fridge, which works perfectly), then throw a handful over the pigs cheeks.

This is how they should look before they go back into the cure tray and into the fridge. It’s a dusting rather than a heavy coating.

Day 1 of the face bacon

After 24 hours, take the box out of the fridge, pour away any liquid that’s accumulated in the bottom that’s leached out from the meat, scatter another handful of cure underneath and onto the cheeks and then put it back into the fridge. Do this for 3 days.

Then, on Day Four, take them out of the tray, wash both the tray and the cheeks under cold water, until all the cure is removed and pat everything dry. Then, put the cheeks back into the newly cleaned & dried tray and back again into the fridge.

After these three days, the bacon is ready to carve, cook and eat. But remember that it’s now been cured by this process & thus preserved. It’ll last. For quite a while if you want. Whether you’ll be able to leave it for any length of time is an exercise in self-denial that I’ve so far failed on.

So, whether you start eating it now or in a few days doesn’t matter. It’s now face bacon in all its glory. 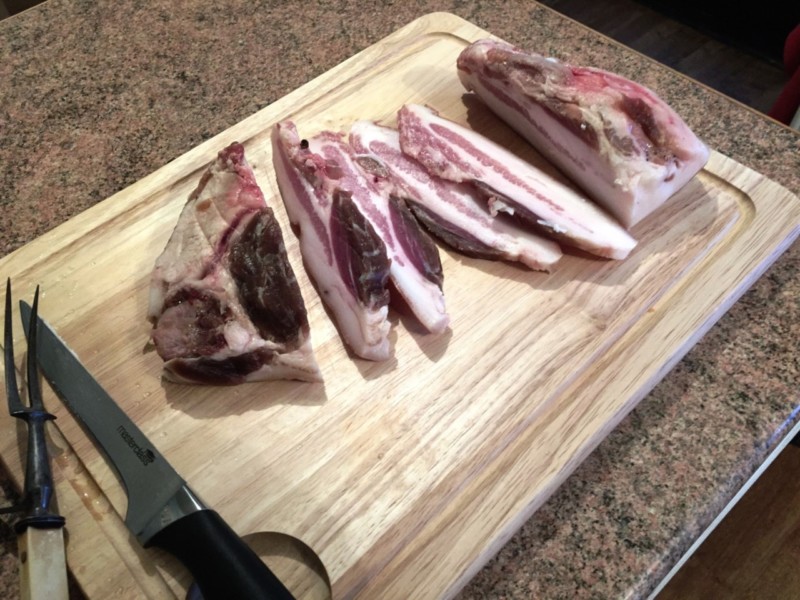 Sliced bacon after a further 4 days in the fridge

And the resultant bacon? Intricate lines of incandescent poetry, dancing on the tongue. The fat, rendering down in the pan, cooking off the other items (I’d suggest a duck egg or two and some fried potatoes). And the smell — oh, man, the smell. Just like when I was a kid…

You see how not difficult this was? Why are you even still here reading when you could be making your own? Start curing. Now! And a happy start to 2015 could yet be yours!

Anthony the Great. Loved pigs. And heading off, to spend long periods of time in the desert. And the patron saint of skin diseases. Thus St. Anthony’s Fire. Nothing to do with BBQ’ing the pork though.

This pig looks a little like the Essex Saddleback. But in that location in Egypt? Probably not.