If you managed to work your way through the previous post, you’ll be further ‘delighted’ to know that there’s some more Spanish homework for you to translate below (and then bring in for teacher to mark) to get the full skinny on this pig. But, as a reward, at the end, I give you a recipe for ribs, from this delightfully flop-eared animal. 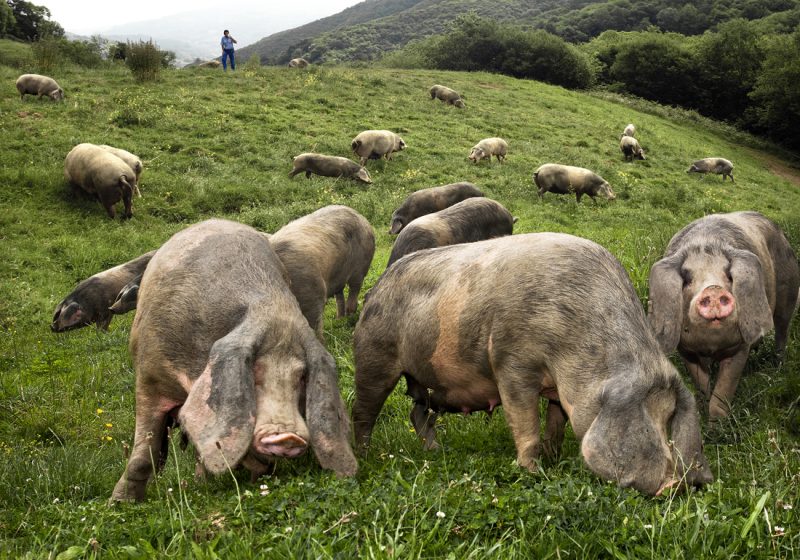 For generations of Asturians, their Gochu Asturcelta (“country pig”) was a bedrock in the economy of their small farms and an important source of protein in the family diet. Its docile character and its easy adaption to the wild and humid Asturian climate along with an ability (like others of the Celtic breeds) to survive through times of food shortage made it an invaluable & easy & cheap animal to maintain. In a rural society where the main animals herded were ruminants — cows, sheep and goats — the pig was a complement, one that helped to maintain the biodiversity of and the maximal use of, all the food sources obtainable from pastures and forests. An early nod to countryside preservation meant that in most of Asturia, dating back to at least the eighteenth century, the Juntas (or town halls) dictated that the muzzles be ringed to stave off excessive damage to the mountain soil — anyone not complying was subject to draconian fines.

According to Alberto Baranda:

“The best form of exploitation is the outdoor breeding with adequate food during growth and a finish based on acorns, chestnuts and other products of the forest for fattening pigs for meat production in extensive systems of exploitation, where, in general, animals of the bait phase are finalised taking advantage of the natural resources of their environment, which confers to their meat a high quality.”

“There are a great number of wild boars in the mountains as well as of gochos (pigs) bred with oak acorns and chestnuts. Its bacon is tasty cooked because it is firm but it is not as good roasted, since it does not have the fat of Castilla”.

In its day, the breed was spread all across Asturia. A very precise census in the middle of the 18th C. gave a population of 278,448 pigs. We also know, thanks to a Felix de Aramburu in his “Monograph of Asturias” — published in Oviedo in 1898 — that at the end of the 19th C., it was still very abundant in Asturias, noting in that same year, that he had counted (really, he counted all of them?) 134,955, throughout the principality.

Fernando Alburquerque, in his work published in 1947, titled: “Wealth in the hand. The pig” praises its meat and most especially the ham:

“Within the indigenous and rustic races, we have very good pigs, and in Asturias there is a black pork producer of the famous Serrano ham, a delight of the Spanish gourmands.They are raised, as in Extramudura, in the open air. “

Again, like all of these rustic, mountain-side breeds, the best finishing was achieved by giving them over to foraging for acorns, chestnuts and apples. On feeding, the ACGA is even more precise and tells us that:

“Usually it was fed twice a day, once around noon and again at dusk; the base of the food was the waste water from cleaning of the dishes, to which was added potato peelings, any half rotten or mouse gnawed pieces of bread, of cakes, of corn and of barley. All this was thrown into the trough.”

“They also ate turnips and oar which was planted almost exclusively for them; bunches of cabbage, corn in green or panicles, hazel leaves and nettles that were harvested and cooked to add to the lavazas (slops) and of course bean, acorns and chestnuts, which many gave them peeled as they claimed that in this way they gained more.”

The introduction of new intensive production systems as a result of an almost exponential increase in the animal protein requirements driven by people in the cities — which at the time were growing rapidly due to Europe-wide rural-to-urban migration — itself occasioned by an increase in the purchasing power of these same urban workers, alongside the deforestation policies of the 1940s and 1950s — which deprived the Gochu Asturcelta of large swathes of its natural habitat — meant that the breed, still at around 224,000 sows in 1955, by 1978 wasn’t even deemed noteworthy enough to be mentioned in the official statistics.

The Asociación de Criadores de Gochu Asturcelta (Association of Breeders of the Gochu Asturcelta, ACGA), was founded in 2002. They’d been formed to snatch yet another almost extinct autochthonous Spanish breed from the jaws of extinction as, by 1998, it was down to just three sows and one boar (as far as any one could ascertain across the entirety of Asturia and they did search the length & breadth of it) and even 6 years later, it was still only slightly better off at five boars and nine breeding sows. Not a hugely encouraging basis on which to start this fraught process…

The Official Cattle Breed Catalog now includes the Gochu Asturcelta in the “Group of Indigenous Breeds in Danger of Extinction” as there are currently still only a few hundred albeit now more widespread in 31 of the 78 municipalities. José Manuel Iglesias, president of the Breeders’ Association, stressed in 2012 that:

“…the breeding of Asturian pigs has generated benefits and has not cost anything to Asturian society. The intention of this group, beyond the recovery of the race in danger of extinction, is to give an economic value to the Asturian countryside and thus help to avoid the depopulation of the rural zones”.

This Spanish video below, more poetically than I, further explains the history; any mistakes or clumsiness in the words above, are mine alone because my translation skills possibly leave more than a little to be desired…

And finally? OK, so finally, we come to your reward for having made it this far; you’ll have to do a bit of work yourself to get this into your laughing gear but, believe me, it’ll be so worth it. Here, with no further ado then is a recipe for costillas de la matanza (or Killer Ribs), courtesy Jeffry Weiss from his 2014 “Charcuteria: The Soul of Spain”:

The rinds from 4 lemons; try & remove them in unbroken strips

2. Put the ribs into the dish and toss them with the cure from step 1, coating them evenly. Sprinkle with the Oloroso sherry. Cover with plastic wrap and put in the ‘fridge for at least 24 hours.

4. Remove the ribs from the cure. Rinse well and pat dry with paper towels. Place the ribs in a large Dutch oven with the lemon rind, cinnamon sticks, garlic, and whole bay leaves. Cover with sufficient rendered pork fat.

5. Place the Dutch oven over medium heat and bring the fat to a bare simmer. Remove from the heat.

6. Cover and place in the oven for 2 hours, until the ribs are fork tender and the bones pull easily away from the meat. Remove from the oven.

7. Allow the ribs to cool to room temperature in the Dutch oven, and then place in the ‘fridge to chill in the confit overnight.

8. In a small saucepan over a medium–high heat, combine thePedro Ximénez sherry and the sherry vinegar. Bring to a boil and then reduce to a rolling simmer for 8 to 10 minutes or until the sauce’s volume is reduced by a third. Then remove from the heat & set aside.

9. Light a charcoal grill, heat a skillet or a broiler on high heat (But be warned: The ribs will splatter a lot in an oven!). Remove the ribs from the fat, wiping off any excess. Place the ribs, meat-side down, and cook them for 10 minutes, until cooked through and starting to brown.

10. Glaze the ribs with the sauce on the bone side. Flip them over and glaze the other side. Continue cooking for 5 minutes, until nicely glazed and just charred a little in spots. Remove from the heat and serve. 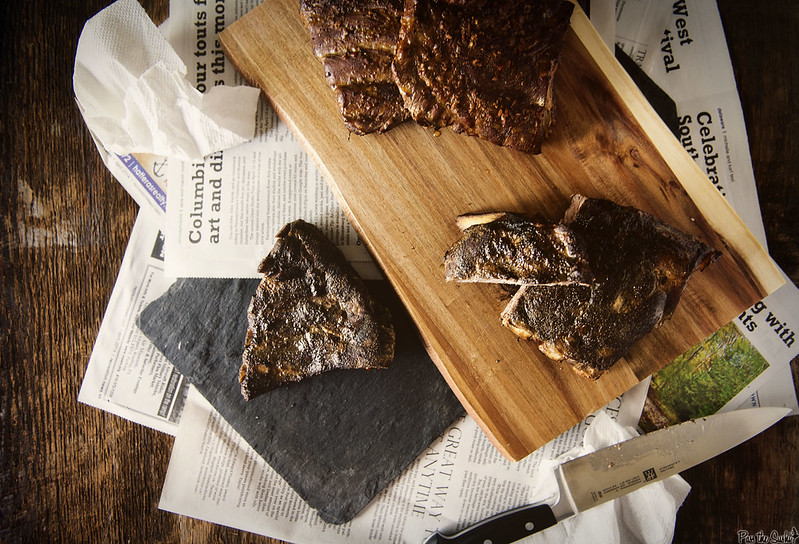