Cooking for geeks; in the food lab

Three books. Three books designed particularly to appeal to the nerds out there.

And yes, that means they also flashed up the bright neon “buy me now” sign in my frontal-cortex. So, of course, I did.

They’re all designed for use on a tablet or laptop or even, at a pinch, a ‘phone (esp. those with Retina or other similar HD resolutions) — which makes reading access much easier in the kitchen. Just keep the device out of the hot fat, the meat grinder or running water and you’ll be good.

Accepting that there’s a huge amount of real science behind the “art” of cooking — even if the average cook isn’t necessarily aware of this although nor do they need to be — it means that this shit is seriously interesting to anyone who wonders why things happen or work the way that they do.

The very wonderful Val Littlewood, had earlier bought me a copy of Harold McGee’s classic “Keys to Good Cooking: A Guide to Making the Best of Foods and Recipes” — which is a sort of prequel to “On Food and Cooking” — in the hard-back edition.

It’s great for dipping into but not quite so good for actual recipes. However, for in-depth (and early undertaken) research into the science of food, it’s still hard to better. Highly recommended.

So, what’d I buy? In alphabetical order here are the ones I have sitting in the Kindle app (or in the case of the last one, by Myhrvold, its own app). Well, at least just these three, for the moment…

Fascinating and interesting, full of some really stylish illustrations and interviews with some real stars in the food arena. This page, for example, is the start of a deep dive into suitable cooking temperatures.

From the Amazon blurb

I don’t like Myhrvold as a person; he’s a huge patent troll in my view and that of a lot of other people and, quite frankly, he doesn’t need the money he & his company try to extort on morally dubious grounds, by taking people to court.

But that said, the science behind this work is impeccable (whilst obviously hugely expensive). So it’s a much better way of spending the millions he made during his tenure as Chief Technology Officer at Microsoft. Patent trolling aside, his books are a delight to read. Visually as well, they’re fantastic. Take a look at this wonderfully posed photo of a cross-sectioned BBQ, in full working order, cooking patties over red hot coals.

He’s a chef as well, as is obvious when you read his enthusiasm for the art AND science of cooking

This is their combined take on the classic cheeseburger, filtered though the prism of their exhaustive work And “one last thing”: I know, it’s already March, so this print, called “December Death” is a little late but hey, who cares? It’s a lovely, lovely hand-coloured print by Caspar Luyken, (1698 – 1702) showing the peasant about to butcher his hog, ready to break-down the carcase, curing, cooking & preserving everything, to have food available for he and his family to survive the coming winter months. 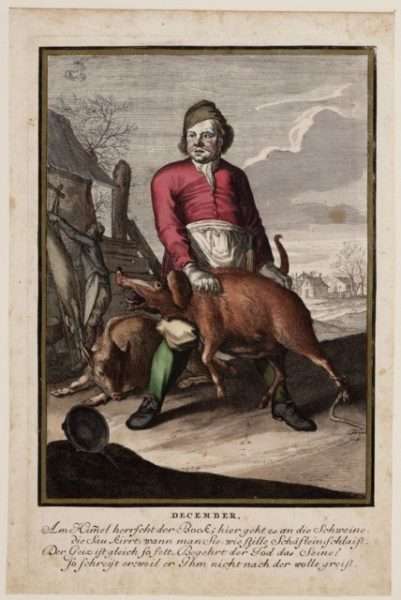