“Ooooh Ossabaw, what is it good for?”

It’s a fact — and one that brooks no credible challenges — that the very best pigs in the world come from England. No “ifs”, no “buts”, no “maybes”. Just a done deal.

That said, I recognise that there are other countries that have one or two pigs that you may wish to put up as some sort of pretender for this title and that may therefore be of some slight interest to you gentle reader. Some of you delightful people — with obvious exquisite taste, I have to say — aren’t English. Indeed some are American, I see from the logs. And Spanish visitors too I’ve spotted. Which is a great example of synchronicity as you’ll see when you read on…

Very well then, let’s look at one or two of the heritage breeds that you people have elsewhere. I’ll cover the black Iberian pig and the American Guinea Hog in other pieces but today I’m going to start with the Ossabaw from the eponymous small island just off the coast of Georgia. 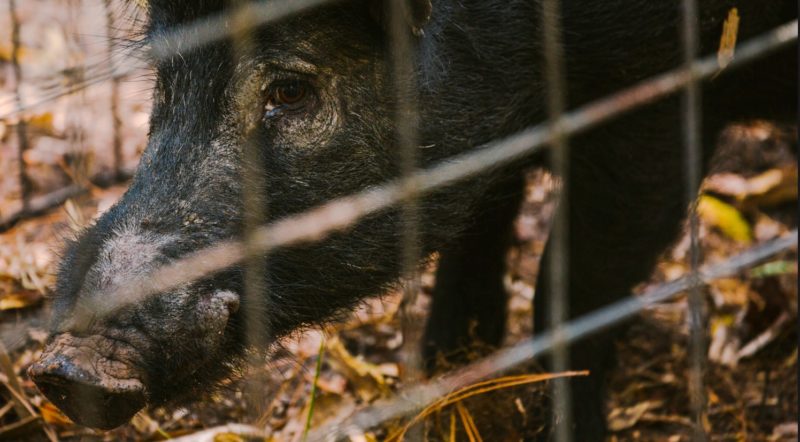 [And if anyone ever doubted after all I’ve written that pigs are just plain whip-lash smart, then take a look at this eye. Intelligent, self-aware, knowing, looking at the camera as intently as the lens looks at him, measuring you…]

And here’s a short video of the piglets having fun:

Their history started more than 500 years ago, when Christopher Columbus — during one of his voyages to the Americas — brought with him a small breed of black hog. It was first suggested they were the Iberian ones but recent full gene sequencing by a Dr. I. Lehr Brisbin* of the Univ. of Georgia, shows they actually came from the Canary Islands, probably picked up when his ships made land-fall there to break the voyage and pickup more water and food as it was an important stopping point for the Spanish and Portuguese explorers en route to the New World.

* Mitochondrial DNA (mtDNA), which comes only from the maternal side, showed that the mtDNA of the Ossabaw Island pigs is more like that of the pigs on the Canary Islands, which reflects the influence of Asian pigs. The mtDNA of Spanish (or Iberian) pigs reflects only European influences.

He dropped off some of these pigs in Cuba, and later, the Spanish missionaries travelling north on expeditions brought them to the coast of Georgia and the Carolinas as a renewable (and self feeding) food source. On the American mainland, the pigs (as pigs do) crossbred with other wild pigs; but on Ossabaw Island, they remained unique, genetically untainted, and quickly adapted to their island home. Their Canary Island ancestors also still survive but, like the Ossabaw, are a rare & threatened species now, in the case of the latter, compounded by their recent classification as a “feral boar” and thus subject to extreme counter-measures taken by the local government health and nature departments,

Because of their isolation and their need to fight and forage for food, the ones remaining on the island are small, less than 20 inches tall and weighing less than 200 pounds at maturity, partly due to the phenomenon of insular dwarfism. Their piglets don’t show the striping that wild boars (and Mangalitsa) do. They’ve long snouts, upright ears, and a heavy coat of bristles compared to most other pig breeds — Iron Age pigs aside. But like most pigs although unlike most still feral breeds, Ossabaws are considered to be intelligent and friendly.

This long, long isolation also means they’ve been forced to find a unique way to ensure their survival. Their “thrifty gene,” as it’s been labeled, uses their own obesity as a tool to help get them through those bad years, when food sources are scarce. 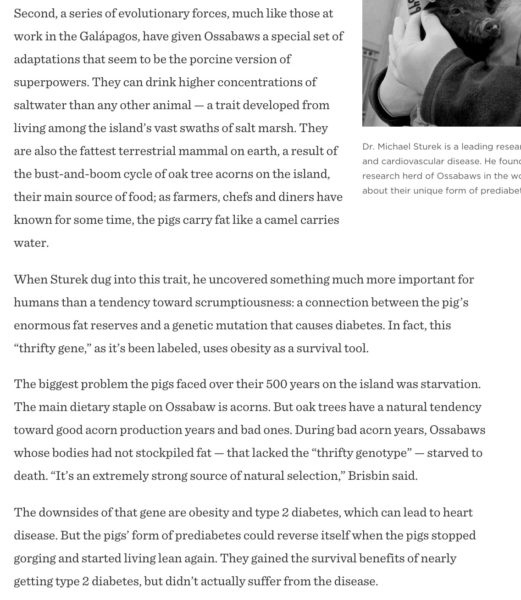 In humans, diabetes is a killer, progressing through blindness, heart disease, obesity, fatty liver, and other horrors. That the pigs have found a way to live with the disease — that they have used it as a way to survive — may in turn provide the key to finding a cure in humans. They’re a unique opportunity as they’re the only pigs in the world that show this trait. And as Brisbin puts it:

“We wanted to find out why the Ossabaw pig with diabetes is doing just fine, thank you, while humans with diabetes are going blind, becoming immensely obese and having their feet amputated.”

Hugely exciting stuff eh? But possible massive health benefits aside, what else are they good for?

There’s a series that started back in 2012 on the American PBS called “The Mind Of A Chef“. Narrated by Anthony Bourdain, it’s an eclectic and fascinating set of half hour vignettes by some great chefs (inc. the very English April Bloomfield) and shot all across the globe.

Episode 7, Series 2 is entitled “Lowcountry BBQ” , part of the series starring Shawn Brock. He’s the current go-to guy of Southern cooking and calls the Ossabaw “the most genuine and pure form of pork, period”, saying that the difference between factory-raised pork and Ossabaw “is almost like the difference between an heirloom tomato and a tomato you’d find on a sandwich at Wendy’s.”

As you can see, moving off the island does wonders for the waist-line… 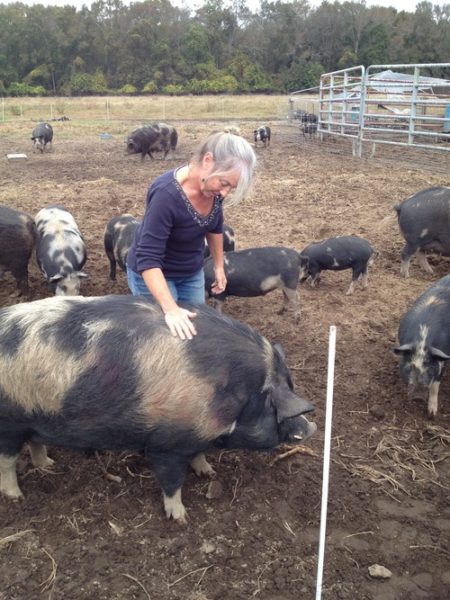 Just like the Mangalitsa beloved of chefs here, we have their fat to thank for their incredible flavour. And when living off the island, their diet has to be managed carefully to stop them becoming hugely obese.

As with the Mangalitsa, it melts at normal room temperatures or even when held in the hand; it’s felt by many to be as healthy as olive oil, thanks to its high levels of omega-3 fatty acids; and it occurs in stunning quantities on the farmed variants — think the pig equivalent of geese dripping their seemingly endless fat reservoirs into the roasting tin — which stuff themselves much more than their wild cousins. Ossabaws often have a 60/40 fat-to-meat ratio and I can vouch for that same incredible ratio on the Mangalitsa carcase. Not so good for profit margins for those chefs who like just joints but…

And the reason it tastes so good? For one, their fat isn’t processed in a second stomach, as it is in cows. This ensures the fat extracts and retains the the flavours of the acorns and other nuts they eat. There’s also high levels of intramuscular fat, which helps flavours those muscle tissues. It’s the same distribution of meat and fat that makes a heavily marbled English Longhorn taste like a gift delivered by angels. And remember children, what’s that lesson we’ve all learned? Yes, that’s right: “fat is flavour.” 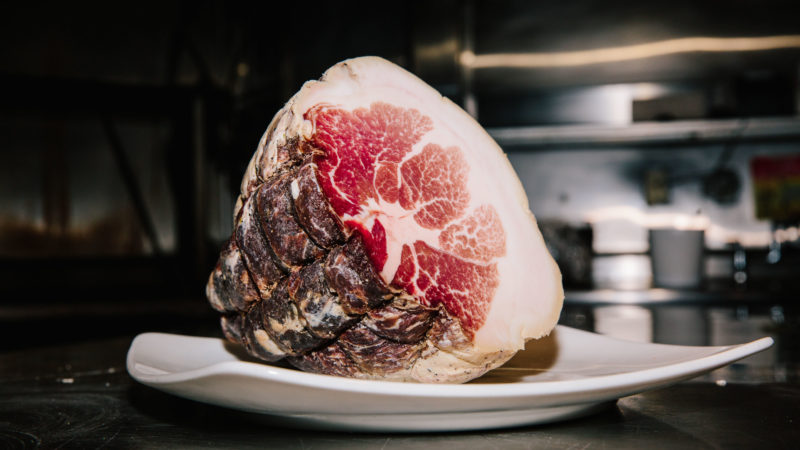 Brock, of Husk fame, has now started his own breeding program to include the Ossabaw line along with the Red Wattle, the Berkshire and the Duroc. As he says:

“If nobody wants these pigs, then the breed just fades away,” he says. “The Ossabaw is a 500-year-old breed. We can’t let them fade away. They tell an incredible story of American history. We can’t let that pig die.”

As you can see, the Ossabaw meat is dark and resembles both the jamón ibérico of the aforementioned black Iberian pig and also that of the Noir de Bigorre  that I’d covered before, so it’s especially well-suited for use in cured meats and whole pig roasts.

And that’s just what Shaun proceeded to use it for in this episode, with an Ossabaw sourced from a local friend — the very wonderful Celeste Albers, pictured above — and cooked with expert skills by BBQ maestro Rodney Scott of local Scott’s Bar-B-Que…

Onto the grill goes the split carcase… 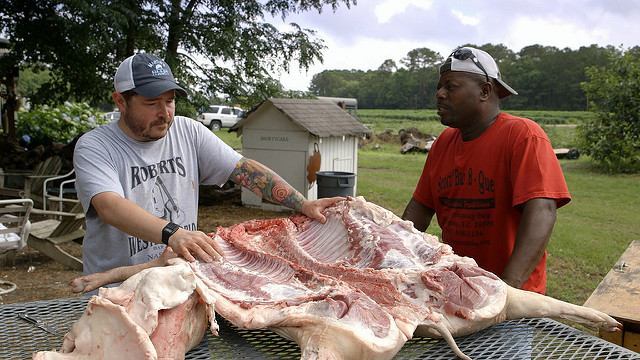 …then cooking and waiting for 8 hours or so. Nothing to do apart from ladle in a few more coals, slather on some of the vinegar sauce — using a kitchen mop it looks like — and drink copious amounts of beer… 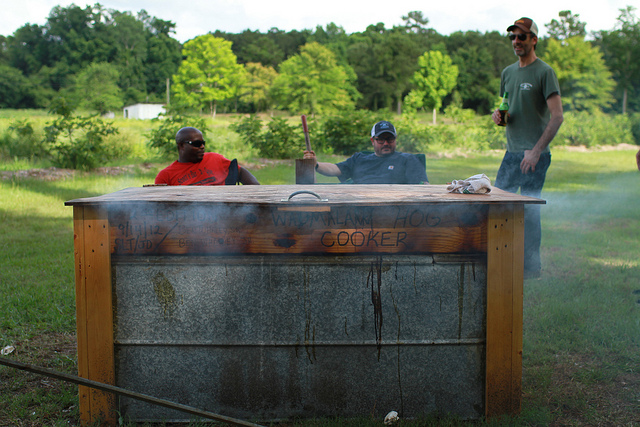 …until it makes this majestic appearance, enough to set anyones taste buds a-rattlin’… 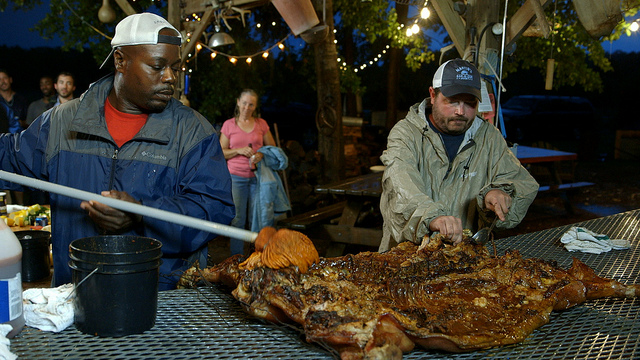 “That fat is outrageous,” says Brock, who also sprinkles it in herbs and spices and buries it in a Pappy Van Winkle whiskey barrel for a year of curing. “It’s like candy.”

And one last thing? You know what goes really well with ham? Yup, that’s right, eggs. So, if you’re in or around London anytime soon, I’d recommend a visit to the team at Le Swine who out of this ratrher coveted van…

and can be found here…