The title actually doesn’t refer to anything this current kleptocracy of a ‘government’ is actually doing to its citizens (nor indeed to the Trumpian attempts to kill, maim & imprison as many BLM or anti-fascist protestors as their police state can process before he is jailed) although, I guess, it’s a parallel that I will probably draw before this piece is finished. I mean you didn’t think you’d get a politics free post from me anytime soon did you? And, of course, it’s a verity that it’s the rich that should be eaten but…

The Brexit/far-right/populist groups are continually invoking our ‘wonderful’ WWII war memories in an attempt to draw a parallel between their destruction of this country as some form of twisted homage to those ‘braver’ times, when we “all pulled together”. Most people at that time were in fact either scared shitless or bored rigid. Or both. Which on reflection is very close to the current state of mind of most of the UK. And Brexit will make the current virus-driven crisis, 10 times worse.

They are consuming the poor, the vulnerable, the weak, those who’re unaware of what’s being done in their name and in the name of “getting Brexit done”. It’s now less than 2 weeks away…

You thought the food shortages and stockpiling before lockdown were rough? Baby, you ain’t seen nothing yet. Have you seen the lorry queues already? The flooded lorry park — The Farage Garage — they’ve been forced to build in the Garden of England’s green countryside? This “garden” now reeks of piss and shit…

There’s a very real risk that a lot more people will starve. The Tories are pillaging the public purse as rapidly and energetically as they can, in a panicked dash to give away as much as possible to their cronies and donors, before we all fall off the Brexit cliff… 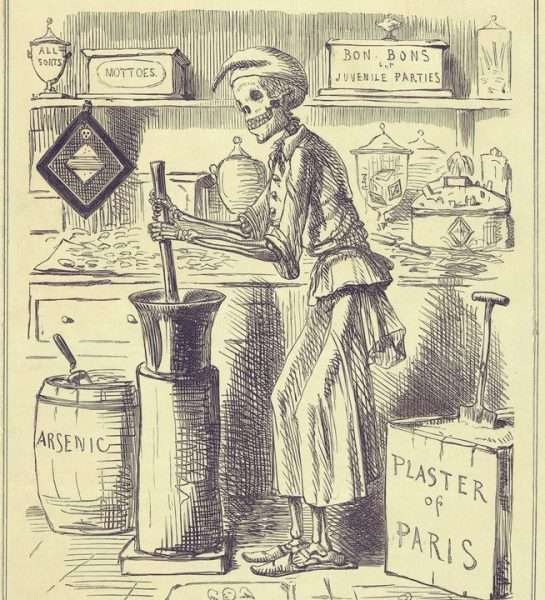 “Every person for themselves”. And “the Devil take the hindmost”.

Thatcher & Reagan were at the roots of this dystopian hell-hole we find ourselves in today. The idea that no one needs to care about their neighbours, about their brothers & sisters, in a community that looks out for everyone, is a poisonous downward spiralling ideology that leads directly the the far-right populists we are seeing today. And the day she lost her job & the day she died, I admit to crying with delight. “Ding, fucking, dong, the witch is dead”.

One of the few good things that continued after the war — alongside both a grudging sense of shared community albeit whilst some were using ration books retained from dead people — and to help cope with the continuing strictures of rationing (something which wasn’t to finally end until July 1954) was an extension of the British Restaurant concept.

Here’s a longer description of how they operated taken from from ‘Communal feeding in war time : British restaurants, 1940-1947.’ by P.J. Atkins.


“In the summer of 1940 an experiment was being conducted by the Ministry of Food on a working-class housing estate in North Kensington. Over 2,000 hot meals per week were cooked on simple ranges, the choice being limited to popular dishes such as Irish stew and dumplings, or roast beef. A different main meal was cooked each day at an affordable price by volunteer labour. People’s reactions seem to have been largely positive, although timeliness was identified as a key issue because workers and school children all needed to eat quickly in the short lunch period available to them. The ministry was sufficiently encouraged by this project to envisage the scaling up of catering to meet local needs in what were to be called Community Feeding Centres.

In early September the ministry requested that the London County Council should take the lead in providing communal feeding facilities in the capital. Called the Londoners’ Meals Service, this was always separate from the ‘British Restaurants’ scheme. But in effect the two were similar, at least in post-blitz London, which was dominated by field kitchens and mobile canteens offering a ‘cash hand carry’ service. The first indoor dining room was opened in Woolmore Street, Poplar on 24 October 1940. By Christmas, 139 Londoners’ Meals Service centres were producing a total of 80,000 meals a week. Many of the sites were schools, first because the buildings were increasingly available as children were evacuated, and, second, because the domestic science teachers and their facilities would otherwise have been unemployed and under-utilised. The price was an affordable 9d or 10d for a two-course meal.

In November 1940 provincial local authorities were circulated, asking them to consider setting up what were now to be called Community Kitchens. By the end of the year these had been established in major cities such as Birmingham, Bradford, Leeds, Liverpool, Manchester and Newcastle upon Tyne. Progress was slow at first but the spread of air raids concentrated the minds of councils, as did the minister’s offer of financial assistance.

Churchill disliked terminology such as ‘Communal Feeding Centre’ and ‘Community Kitchen’ as ‘redolent of Communism and the workhouse’. In March 1941 he suggested the name ‘British Restaurant’ because “the word ‘restaurant’ is associated positively in people’s minds with ‘a good meal’.” One modern branding professional sees this in retrospect as the masterstroke of someone who instinctively understood the difference between product and brand.

Most British Restaurants were run on the cafeteria principle. The diners bought tickets and then queued up and chose food from a series of hot plates.

Generally speaking, the food in British Restaurants was said to be of good quality and filling. There were some attempts to introduce meals in the Oslo style, with the intention of providing in one sitting all of the day’s needs for animal protein, vitamins and minerals. But this met with resistance from customers who wanted their traditional meat and two vegetables. In Birmingham all 56 British Restaurants had a choice of five meat dishes, five vegetables and five desserts, and those in the city centre had more. In other cities with less on offer, menus had to be removed from the entrances because customers would wander from one to another and the restaurant serving roast attracted the customers. 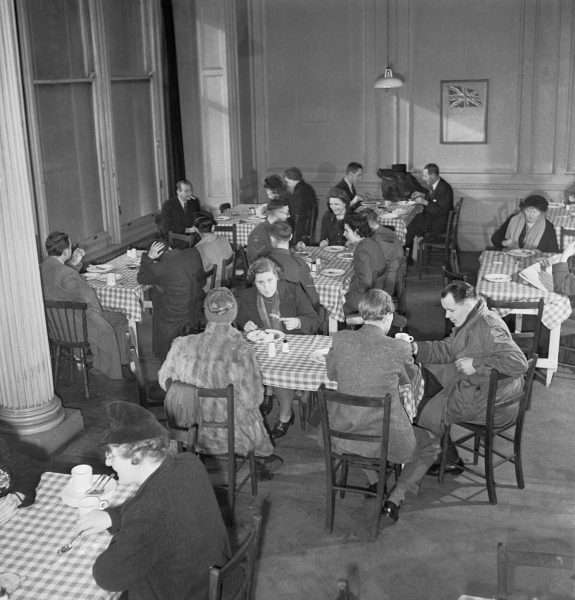 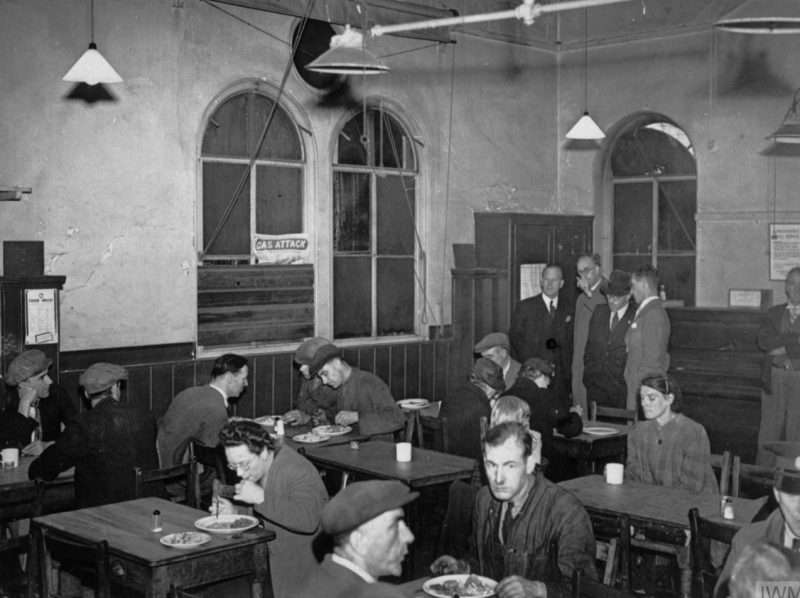 I can almost identify my grandmother & grand-dad and indeed my parents, as some of the diners in these photos.

Interestingly — and from where the other part of the title of this post comes from — was this detail of the research work that went into the rationing levels chosen:

In December 1939, Elsie Widdowson and Robert McCance of the University of Cambridge tested whether the United Kingdom could survive with only domestic food production if U-boats ended all imports. Using 1938 food production data, they fed themselves and other volunteers one egg, one pound (450 g) of meat and four ounces (110 g) of fish a week; one-quarter imperial pint (140 ml) of milk a day; four ounces (110 g) of margarine; and unlimited amounts of potatoes, vegetables and wholemeal bread. Two weeks of intensive outdoor exercise simulated the strenuous wartime physical work Britons would likely have to perform. The scientists found that the subjects’ health and performance remained very good after three months; the only negative results were the increased time needed for meals to consume the necessary calories from bread and potatoes, and what they described as a “remarkable” increase in flatulence from the large amount of starch in the diet. The scientists also noted that their faeces had increased by 250% in volume.

The Civics Restaurant Act of 1947, continued this tradition, as rationing was continued well after the war ended and many of the British Restaurants just re-branded and carried on serving as they had done, all thorough the war.

Interestingly and in a nod to the future equity problems we continue to see, the ‘haves’ v. the ‘have-nots’, John Strachey, a Labour minister of food was quoted as saying:

“private enterprise in the catering trade has, on the whole and by and large, catered for the middle class and not for the working class.”

One difference between them and their war-time predecessors, was that they were allowed to serve booze, a decision defended on the grounds that it would break down the social barriers between the “beer drinker” and the “tea drinker”. Whether it did or not is moot, but unless you were a Methodist minister, I’m pretty sure you’d have welcomed this change.

They carried on into the 1950s, albeit with their numbers steadily declining and the ending of rationing in 1954 removed their primary rationale and the last ones shutting down at the end of the decade. This poster was from a (failed) campaign to keep one of the remaining ones open in Hornsey taken from this helpful post. 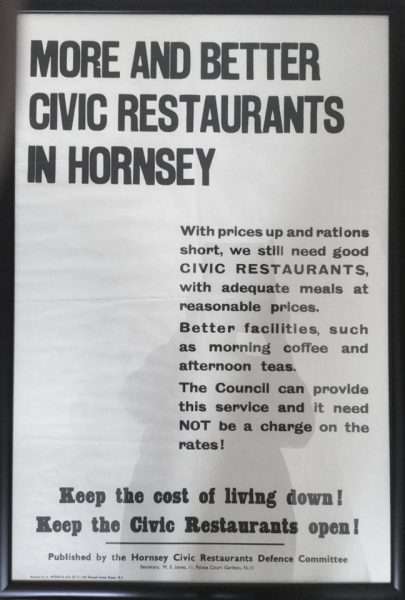 This is a fantastic piece by Rebecca May Johnson on canteens, another egalitarian idea whose time seemed to have gone in this country, many years ago but one which, along with the Civic Restaurant, seems, to me that we desperately need to resurrect now.

We are, we keep being told by the psychopathic ghouls in charge, the 5th or 6th richest country in the world. Yet we have 10s’ of thousands of food banks and UNICEF felt the need to feed our children…

If we can’t roll the tumbrils and bring out the guillotines for the politicians and the 1%, let’s at least offer the people at the very bottom of society, a proper community- led set of places to eat. Where there isn’t any stigma attached. Where they can meet — yes, I know, socially distanced for the foreseeable future — friends and family. And where they can get fed. Surely that’s not too much to ask from the “6th Richest Country In The World”. ..