I certainly do. And once you understand what that means, you probably will as well…

This piece was suggested by reader Gay who — in a comment on one of the earlier pieces here — mentioned that as a child, she recalled her butcher father using ‘butchers back slang’. I’d heard of this ‘language’ before but never really looked in any real depth into it. So, now of course, I was obliged to.

Whilst digging around for more detail, I happened across this description — on a US site — of one of their butchers’ term. And of course, there were some schoolboy giggles. Come on. What else did you expect from me?

A prized knife for boning out meat from a carcass.—Sanford

Along with some costermonger slang words… 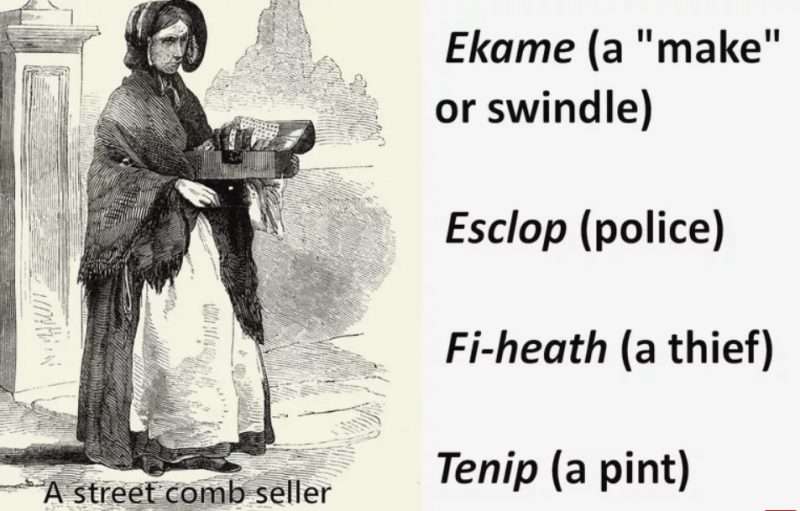 So, to the butcher’s slang. 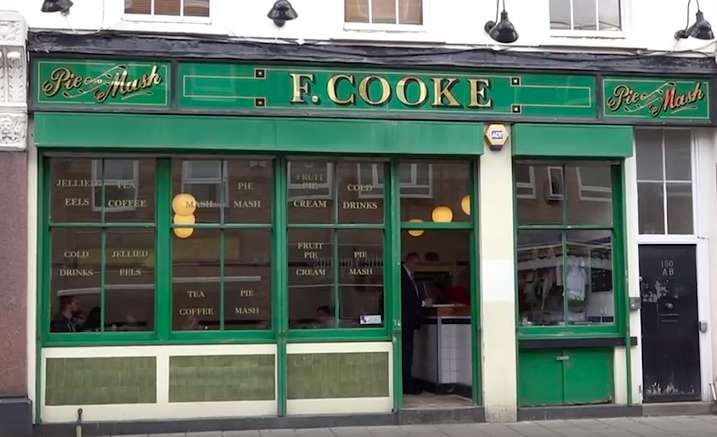 I love this green BTW.

That was mainly used many, many years ago, when the butcher would tell his boy or girl serving to get rid of certain cuts of meat first. They couldn’t just say ‘Make sure you give this lady the old chicken first’, otherwise she’d say ‘You can shove that chicken up your arse.’ So they would say it in a backwards lingo that the customer wouldn’t understand.

The rest of this piece was originally written for a (now recently defunct domain) site called weloveaccents.co.uk and it’s been cited on a number of others. I can’t credit the actual writer but they still seem to have a presence on Twitter, so you should support them there. I’ve not edited it at all but am very grateful for their research.

Butchers’ back slang (or, in the language, rechtubskay-cab gee-nals) is a precursor to Cockney rhyming slang. Early Cockney slang includes ‘rofe’ for the number four, which in rhyming slang became ‘French loaf’ or just ‘French’. Back slang exists in elsewhere in the world as well, and there is even a type of French butchers’ back slang called Loucherbem, which originated in the early 1800s. The original Cockney back slang came from market traders, including costermongers and butchers and, like rhyming slang, was used to mask the gist of a conversation from outsiders or from customers. It is said that costermongers invented back slang and this was then picked up by butchers later in the 1800s and as both these trades were popular among Cockneys it is no wonder that this masked dialect fed into Cockney rhyming slang.

Butchers’ back slang originated in Smithfield Market in around 1850 and was used by the meat traders to insult each other without offending members of the public and to speak about the prices, age or quality of the meat without letting on to customers that they might be being sold something sub-par. It was also used to make comments about customers, be they old men or young girls, and in this way it is similar to Cockney rhyming slang as a thieves dialect; they wanted to keep their conversations private but still be able to shout to each other in public.

There are some general rules to back slang but, like the English language itself, the rules are not hard and fast. Generally, the last letter of the word is pronounced as its own letter, hence for the words ‘back slang’ the correct backwards pronunciation is ‘kay-cab gee-nals’. This holds true for most words; ‘girl’ is pronounced ‘el-rig’ but ‘woman’ is pronounced ‘nammow’ or sometimes ‘nammo’ without the sound of the ‘w’ at the end. These variations developed with time and location. One word which is still in common usage (albeit with a different meaning) is the term ‘yob’ for ‘boy’, which started out as normal back slang but has now taken on a derogatory meaning.

When we come to a word that ends with a vowel, such as ‘three’ the vowel is not sounded out separately, so rather than ‘ee-erth’ we get ‘earth’. Cockney butchers’ back slang changed this to ‘erf’ to reflect the Cockney pronunciation of the ‘th’ sound as ‘f’.

A word you would expect to find back slang for is ‘police’. Given the rules above you might expect this to be pronounced ‘ee-cilop’ however it is pronounced ‘escilop’ (later shortened to ‘esclop’), showing that the formation of back slang and decisions about how to pronounce certain back slang words was through a combination of oral and written language. If you were to write ‘police’ backwards you would have ‘ecilop’, so the decision about how to pronounce the ‘ce’ sound is clearly influenced by how it is written backwards. For the words ‘back slang’ it could have been decided that as the last consonant sound in ‘back’ is the same that the back slang should be simply ‘cab’, but by adding the strong pronunciation of the last letter (or first, when the word is backwards!) the word is less clear and more suited to hiding the original word.

Pluralised words in back slang leave the plural ‘s’ at the end. Similarly for words ending with ‘ing’ the ‘ing’ stays at the end of the word. Words starting with ‘h’ such as ‘half’ and ‘have’ turn the ‘h’ into a ‘tch’ sound (making ‘half’ become ‘flatch’ and ‘have’ become ‘ee-vatch’ and sometimes ‘vatch’), again showing the blending of the spoken and written word to determine the pronunciation of the back slang. This point is very interesting when you consider that the Cockney accent is known for dropped ‘h’s; only in back slang is the ‘h’ sound pronounced by Cockneys. 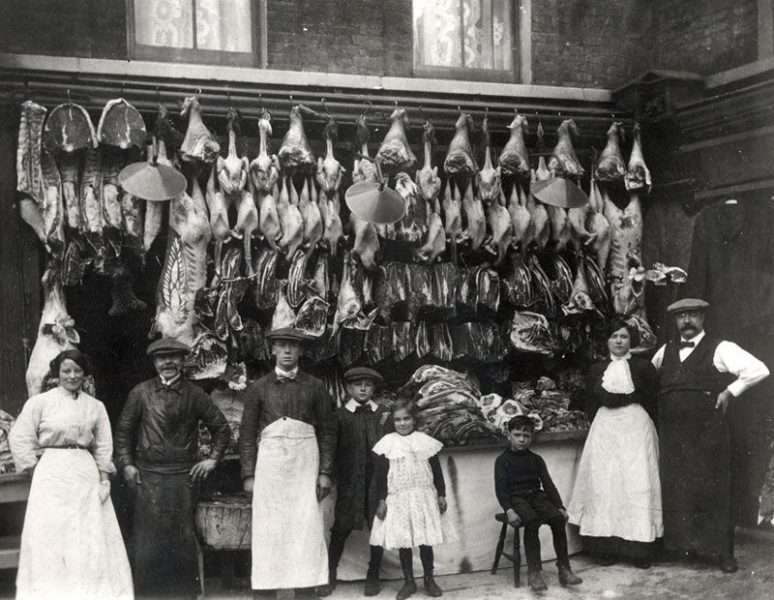 In the days before sell by dates and before it was common to have pricing displayed next to each cut of meat butchers could use back slang to get rid of meat they had too much of, meat that was going bad and needed to be sold quickly, and even charge disliked customers more for it. For an example of how butchers’ back slang might be used in the shop consider the scenario of a disliked customer coming into the shop and asking for a pound of beef steak:

Butcher: Good morning madam, what can I get for you today?
Customer: I’ll take a pound of beef steak and make it quick.
Butcher (to his assistant): Go and tuck the dee-lo woc a tib of nettor es-roh.
Butcher (to the customer): I’ve just sent him into the back to get you the best bit.
Butcher’s assistant: The nettor es-roh is on doog even for the dee-lo woc so I’ll get tucking a tib of dee-lo woc.
Butcher: Ee-nif tub I’ll ee-gratch the ee-mass as for the doog tucks.

Butcher: Good morning madam, what can I get for you today?
Customer: I’ll take a pound of beef steak and make it quick.
Butcher (to his assistant): Go and cut the old cow a bit of rotten horse.
Butcher (to the customer): I’ve just sent him into the back to get you the best bit.
Butcher’s assistant: The rotten horse is no good even for the old cow so I’ll get cutting a bit of old cow.
Butcher: Fine but I’ll charge the same as for the good cuts.

If a young lady came into the shop the butchers could use their secret language to make comments about her, for example ‘cool at the gib tee-serbs on that el-rig’, or ‘look at the big breasts on that girl’. Back slang was not just used to make personal comments about the customers though, they would also use back slang to insult each other, perhaps telling one another to ‘kay-cuff foe’ (and you should have picked up enough about back slang by now to work out what that means!), or if a colleague had won some money on a bet they might call him a ‘y-madge dratsab’.

Typical butchers’ back slang words are for meat, prices and people. It is not a sophisticated slang and most of the words for which back slang has been created are very base, reflecting the nature of the tradesmen who invented it and the sorts of things they wanted to say secretly. Below are some common terms and things to listen out for next time you are in a butcher’s shop, although it is rarely spoken nowadays.

So, who still uses this in the shop?  There are apparently still plenty of butchers working nowadays who can converse entirely in backslang, and many more who use the odd word here and there.

I wonder if any of you out there have anything to add?

And kay-rop potches are pork chops. Told you that you’d approve of the headline offer. Now, off to read more about grains. And fish. And soil. And maybe another beer…