Pretty sure Val @val_littlewood was very close to slitting my throat with any weapon she could lay her hands on; even a blunt, rusty spoon, as I incessantly ‘sang’ this, whilst driving South-Western US highways … 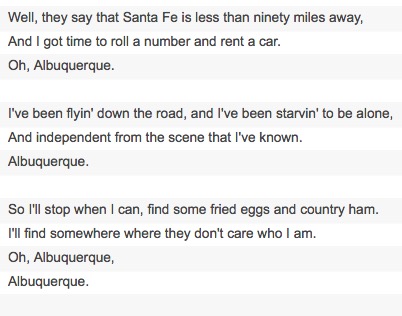 And I now have that Neil Young song — from the truly excellent Tonight’s The Night album — burrowed coal-mine deep into my brain-pan again & find myself humming it continually as I write this post; reminded as I was of it whilst reading Sean Brock’s “Heritage“; his paean of love to the American South and its food & history. As well as a great set of ink — that’s multiple tens of hours of work there — championing his very real passion for the heritage vegetables that he uses so effectively… 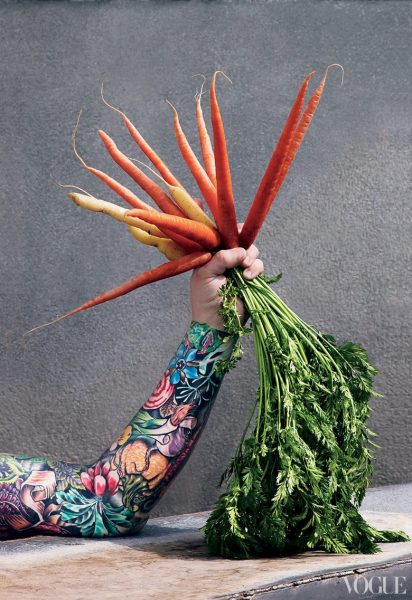 …he also adores his pigs.

I’ve talked before (yeah, yeah, ad infinitum, I know!) that there’s a deep set of emotions involved in raising an animal and killing it, then breaking it down on a table with a saw and a knife. And after you’ve gone through that whole process, the waste bin had damned well better be empty when you’re done; utilise every last little bit. And that’s his philosophy as well:

“To be a chef means to buy and cook meat, and that means we have a choice to make. The differences between the animals that modern agribusinesses produce and animals raised on pasture and humanely treated cannot be understated. Commercial animals are treated horribly, given inferior feed and no attention, and con ned in huge warehouses where their feet never touch the dirt. If horses were treated this way, someone would get arrested—but I’m sure you all have seen plenty of good documentaries and read informative books to this effect.” Sean Brock, Heritage

He adores his pigs. But most especially the country ham they produce…

In one scene from his “Mind Of A Chef” series, he’s seen caressing a country ham leg and declares that while he often deems ingredients his “favourite,” he really, really, really means it when it comes to the cured pork:

“This I’ve used as a pillow before — I’ve taken naps on country hams.”

He’s also a notorious experimenter. One of his (many) obsessions has been ham-curing efforts in cooperation with the distillery behind one of his favourite bourbons, Willett (which I too readily admit is really rather special); curing Ossabaw hams, then sending them up to a friend, Drew Kulsveen (who, as head distiller, represents the 5th generation of the Willett family) at their newly revived distillery in Bardstown, Kentucky. The hams are then hung in the rick-house along with the barrels of whiskey lying in quiet repose, which allows the exterior of the rind to acquire that self-same whiskey fungus that you’d see blackening the walls and trees around the barrel warehouses.

The effect on the meat is, he claims, close to miraculous:

“It’s the most delicious fucking ham you’ll ever eat,”

Country ham has a long & honourable tradition in the Southern states.  The designation country ham first appears in print actually only as late as 1944; it’s referring specifically to a method of dry-curing and smoking native to the rural regions of Virginia, Kentucky and contiguous states. Nowadays, the term refers to this style of ham preservation rather than the geographic location, though a Smithfield country ham — perhaps the best-known brand of American country ham — can legally come only from the area around Smithfield, Virginia.

Country ham is often found paired with Red Eye Gravy.The hams are salty and the gravy, made from the pan drippings and with the addition of black coffee, packs a punch. And why is it called ‘Red Eye‘ gravy? When the coffee is added to gravy, the ham fat appears like a red eye, staring up from the plate. (It’s also known as bird-eye gravy, poor man’s gravy, red ham gravy and muddy gravy). Well known in the South, little known in the rest of the United States, it’s really delicious, a stroke of genius by some long-dead, unsung culinary hero.

In his “American Taste; A Celebration Of Gastronomy, Coast To Coast”, the erudite, witty & hugely opinionated James Villas, bemoaned its commodification in a piece entitled “Cry, the beloved country ham” (originally published in Esquire magazine), all the way back in 1974.

Villas described the production process that had been followed in the South for hundreds of years but was (even back then) becoming rarer as the large food processing companies, in collusion with local & national regulators, reduced the standards requirements, year in year out, producing hams, yes, far more quickly but equally, producing hams that were of far, far lower quality and virtually tasteless in comparison to those known only a few years earlier:

In the old days the diet of most hogs included plenty of milk and if possible peanuts for soft texture, and lots of table scraps for flavor, hence the expression “slopping the hogs.” Depending on locations and temperatures, animals are generally butchered during the first cold spell, around November and never before. Once processed the huge hams are hung bone side down for at least 24 hours, to allow the meat to drain and cool. If the weather remains cold fine, if not the shanks are wrapped in brown paper for protection against flies or spoilage causing skippers (insect eggs).

After this initial procedure, the hams are taken down, packed in a salt cure, which might have included other ingredients such as sugar, black pepper or mustard, and left for about a month at temperatures ranging from 28 to 40 degrees Fahrenheit. Then they are soaked in water, hung up again to dry, rubbed in pepper or wrapped to ensure further protection against vermin and insects, and smoked 4 or 5 days over slow burning hickory chips, before being left to hang in a barn or storage room to age under natural or atmospheric conditions for not less than a year. James Villas, 1974

And he goes on to give further detail:

In late winter, he said, the hogs are slaughtered and the fresh hams are cured in salt. They are smoked in the spring. The critical steps in their maturation come with “the July sweats,” when, during the hot months, the flesh of the ham expands into the outer covering of mold. In the winter, the meat contracts, drawing with it taste-enhancing enzymes.

Interestingly, the other jewel of the Kentucky table, bourbon, relies in similar fashion on the seasons of hot and cold. In the summer, the maturing bourbon mingles with the charred inner layer of the oak aging barrels. Then, in the winter, liquid is drawn back through the charcoal, carrying notes of woodiness and a smooth smokiness.

Yet America appeared to dodge this particular bullet; from Peter Kaminsky’s “Pig Perfect” published nearly 30 years later, it becomes apparent that country ham (along with a lot of other heritage foods, plants, seeds and breeds) had been (a) seen as taking too long to get to market by the huge agri-combine, industrial food, producers, and therefore not something that they wanted to get into as it wouldn’t “add shareholder value” or some such similar corporate bollocks and (b) a huge, renewed upsurge in demand and interest in, all things heritage related.

The whole slow food movement can be summed up in those two ideas. Passion for the native food, produce, animals and their environment and bionome and a desire not to rush things.

For those of you interested in some further research, there’s a great article entitled “An Essential Guide to Country Ham. Everything you need to know about America’s greatest charcuterie” by Lucky Peach available to read here:


And again, from “Heritage“, comes the two pork dishes below. 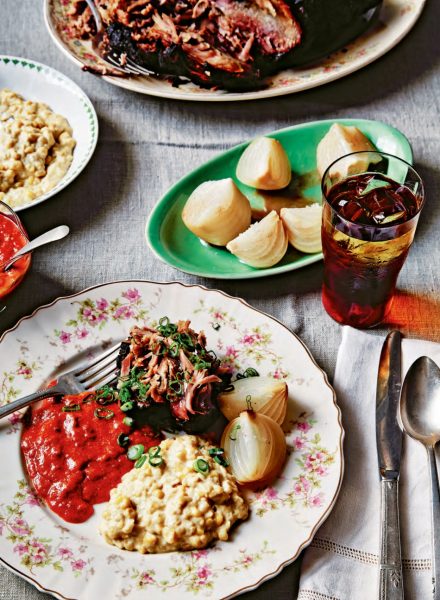 and the second delight is his cornmeal-fried pork chops with goats-cheese and smashed potatoes along with a cucumber & pickled green tomato relish: 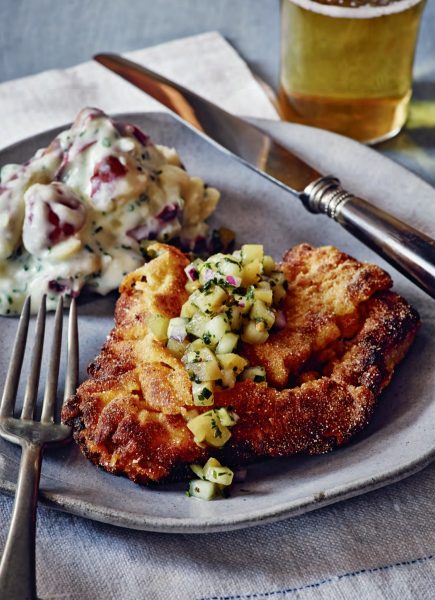 Of course, as you can never have too many pictures of pigs — in this case an Ossabaw — here’s one of Sean’s darlings to send you away with a smile on your faces. 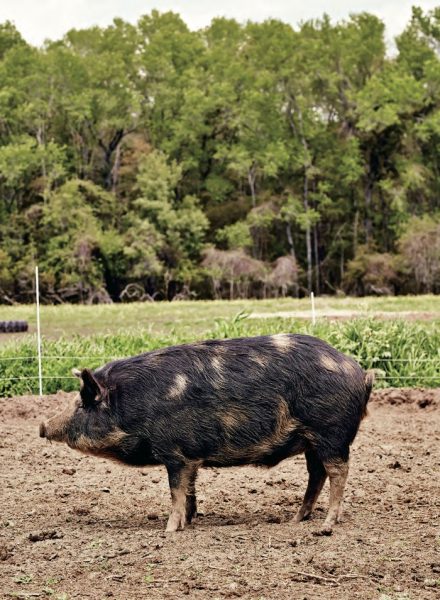 And finally? Finally, how about Polish “hipster chops”? Yeah, “after you”, I hear you saying. I get it. I’ll be your guinea-pig man & try it out. Cowards. More news later… 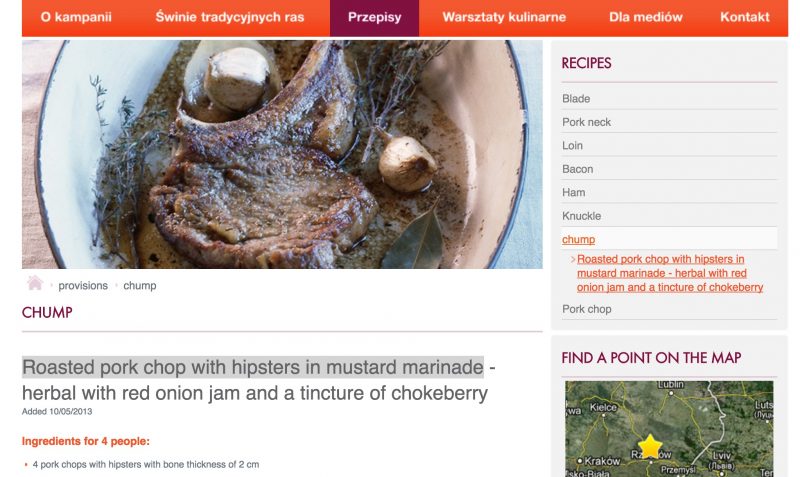