The last part of the Suffolk run took us to Southwold and to the Adnams beer brewery & spirits distillery. They have these amazing copper stills, which seem to be perched, hovering in mid-air inside the brewery, used for their spirits which are distilled from the very same beers made on site.

Their gin is some of the best I’ve tasted. From anyone. Anywhere. It was rather a revelation and I apologise to Adnams for the vague “they’re a beer company, how good can their spirits be” silent slur that I had in my head until after this trip. The answer to that unspoken question? Exceedingly bloody good, that’s what.

Both of these are award winning and rightly so. The First Rate one is around 48% ABV whilst the Copper House is a more gentle 40%ABV.

[One thing I learned today is that quinine and juniper share molecular similarities which is why they work so well together in Gin & Tonic; and why tonic with other white spirits just doesn’t.]

Well, the entire distilling production – from grain to bottle – is undertaken in-house; Adnams are still one of very few distillers who have the ability to actually do this.

Starting with East Anglian malted barley as the base, the process of crafting it begins by creating a beer ‘wash’ which is fermented to around 6% ABV but without the addition of hops. Once at this stage, the wash then takes a journey through their beautiful stills (we didn’t get to see these — we’re planning a return trip!).

But at this point it is still not yet gin…

Winding up and down columns, more spirit geekery happens until the pure, clean spirit is created using their Beer Stripping Column where it’s converted to what they call, “Low Wines”. This is around 80% ABV, but still contains all the higher alcohols and fusel oils which need to be separated out. The next stage uses the pot still, in conjunction with rectifying columns and a polishing column. The rectifying columns, use 40 separate plates (apparently) to get the spirit to above 96% and allow them to separate into the charmingly named “Heads, Hearts and Tails”. Then, the polishing column removes any methanol in the spirit — both a legal requirement and one that stops you, the drinker, being poisoned — remember, that shit makes you go blind. [That’s also why I recommend you steer clear of Sterno and other “spirits” distilled from things like shoe and floor polish…

The spirit has to retrace its journey to the copper pot still one last time to actually become gin. Here it’s reduced to 50% ABV, where juniper, along with five other botanicals, are added directly to the spirit in the copper pot still from where, after a final overnight maceration, it is distilled.

Copper House uses juniper berries, orris root, coriander seed, cardamom pod, sweet orange peel and hibiscus flower. The cardamom & hibiscus flower really punch through. It’s a touch oily and has a particular ‘mouth feel’ (yeah, sorry about that one but it’s true, it does.) And the hibiscus, while now not unique to Adnams, sets its flavour apart and makes the gin really rather distinctive. The bitter, floral flavours of the petals give this a really definitive taste and it’s definitely one to seek out, either on the shelves of your local off-licence or if you see it on the shelf of a bar.

The First Rate really lives up to its name; it’s a much bigger animal in comparison to its sister product. Made with a blend of 13 — rather than six — botanicals, it’s a much bolder and of course more potent gin. With the usual suspects in the botanical mix (juniper berries, coriander seed, cardamom pod, orange peel & liquorice root) it shows off aromatic spices mingled with a softened juniper and those hints of citrus. Then, the more unusual vanilla pods, caraway seeds, fennel seeds and thyme add to what is a really complex mix. It’s a great balance as well with the juniper coming back again in the finish on the tongue.

The first one is more of a slurping gin; the second one, one to take your time over and to savour. But we’d recommend them both. That they’re not the toast of the town in Amsterdam is something we’ll try and remedy next month.

One thing we loved and that was the icing on the cake of this tour was that Adnams claim that this is one of the most energy efficient breweries in the UK, with the hot water by-products being reused to wash casks and all their distilling waste being processed in their anaerobic digestion plant where it’s converted into renewable gas to power their production line.It’s a hugely impressive place and you really do need to take the tour.

Their beer is also stunning; more on that at a future date.

OK, enough on non-meat items, “one last thing” for today is the team at Flatiron in London. One that’s already been added to the (ever growing, like the pile of unread books both paper & Kindle/iBooks) list of “seriously mouth watering places to visit and eat at”.

Here they show off metalwork, meat & ink. The cleaver looks just like my own new knives. I want one.

Here, breaking down some great beef. 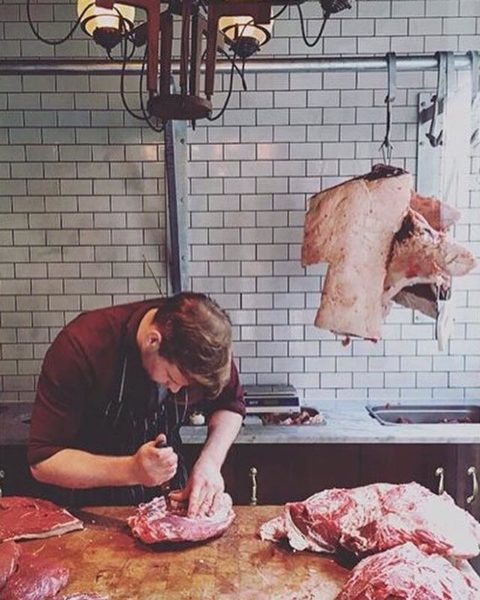 And yet more tools of the trade. And a great butcher’s block. 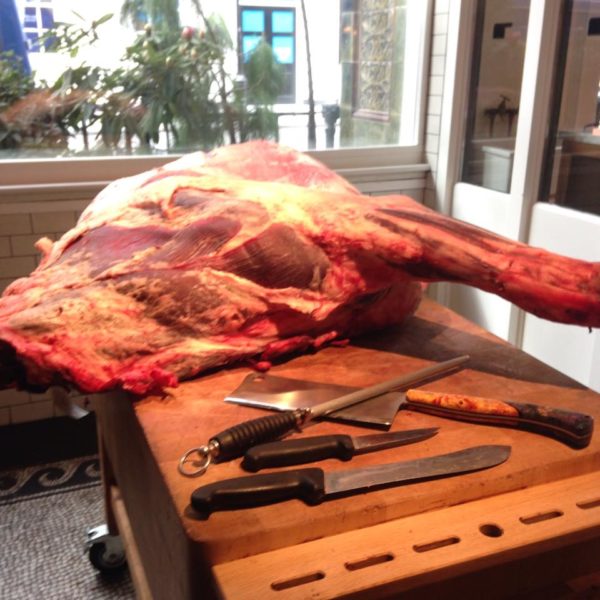 In action — the tools, the meat. And rapt onlookers. 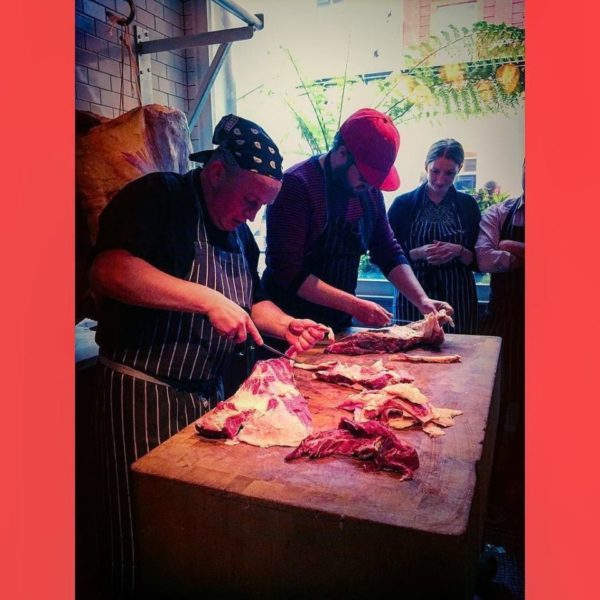 A contented man; with meat & fire 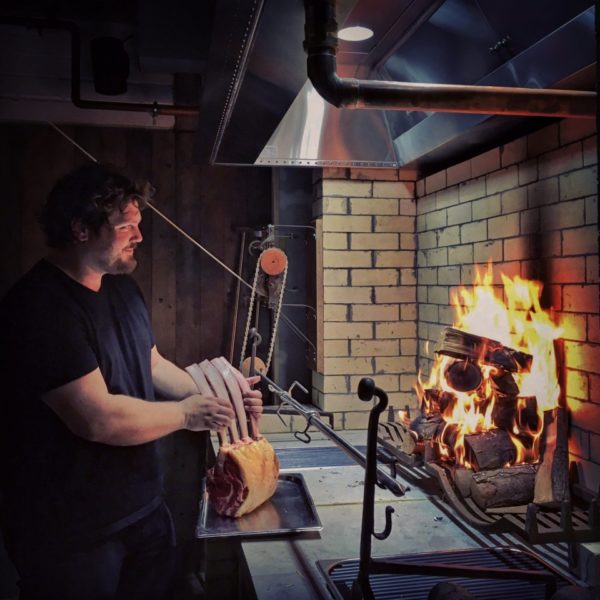 And finally another piece of beef wonderfulness from the always amazing Turner & George. This one an aged Galician milk cow. And if that doesn’t have you drooling uncontrollably over your scree, you should check your pulse just to make sure you haven’t pegged out…

That’s all for now folks. See you later.