Great British butchers (who just happen to be not male…) Pt. 1 of 2

You know what? There still aren’t that many, home or abroad. Traditional misogyny as the main reason aside for a second, it’s also a very physical trade, especially if you’re busting down large cow carcasses all day. That said, there are some I’ve found and if you know of anymore that I’ve missed, please, sing out loudly so I can update these pages. 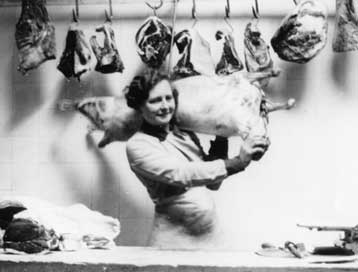 There’s enough female butchers to make up more than just this one post but still — and even allowing for lots not being reported on — too few. You’ll see from their own comments that women butchers seem to get the idea of respecting the animal and the “nose to tail” ethos straight away. A lot of men seem to view it as just another job and the animal as just a product. So, for the welfare of the animals, let’s hope and train and plan for more women to come into the craft.

“…the girls are gentle with the meat. The blokes are rip, tear and bust.”

and so agrees a male butcher, Craig Cook, of Prime Quality Meats in Northbridge (and he’s Australian!).

But let’s start with Marian Voyce who this year turned 84 and is believed to be the oldest female butcher in England, but still has no immediate plans to retire. She continues to roast her own cooked ham and butcher whole lambs, as well as cutting joints to order.

“It is a long week but if I was at home I wouldn’t have anybody, I haven’t got any family and I shouldn’t be around. “I shouldn’t live long without it.”

“It is a typical old fashioned butchers,” “We do have a refrigerated window and we have a marble block as the counter.

“A lot of people who visit say it is lovely to come into a place that is so old fashioned. “Some of my customers I have had for 30 to 40 years. Many are elderly and they are dying and then I lose them.”

She goes to the gym to keep fit and since the death of her husband — a master butcher who taught her the craft — in 2000, she’s run the butchers by herself; clocking in six days each week and not taking a day off for holiday or sickness for the past five years since her past sole helper died. 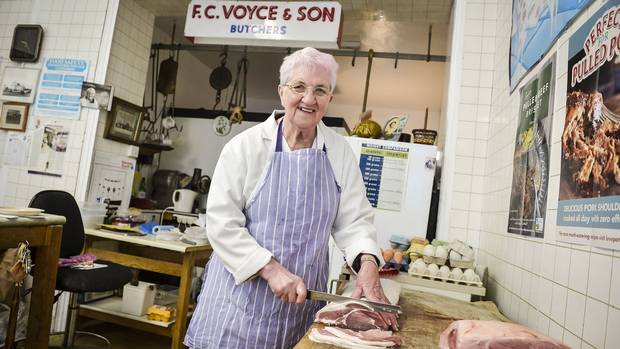 Mrs Voyce married her husband and began working at her father-in-law’s shop, FC Voyce, in Coleford, Gloucestershire, in 1959 and the couple bought the shop in 1968 after Coleford market closed.

“It was very different then altogether,” she said. “We used to have people queuing out the door.”

Workers would be given meat during the week then come back at the weekend after receiving their wages and pay off their bill.

“In all my years working here I have never known it so quiet,” Mrs Voyce, who uses a pencil and paper to calculate bills, said.

“I find it really sad to be quite honest. Having worked here for 63 years, it is such a big difference.

“People come in here to buy their meats for big occasions but tend to go to the supermarket otherwise.”

If you live close to Coleford, go and support this lady.

Let’s follow on with Martine Chapman of Highland Wagyu whose farm produces some of the most mind-blowingly delicious (and also eye-wateringly expensive) Wagyu cuts to be found anywhere in the world. She’s also on “a mission to produce the best beef in the world”. So, no pressure there then. 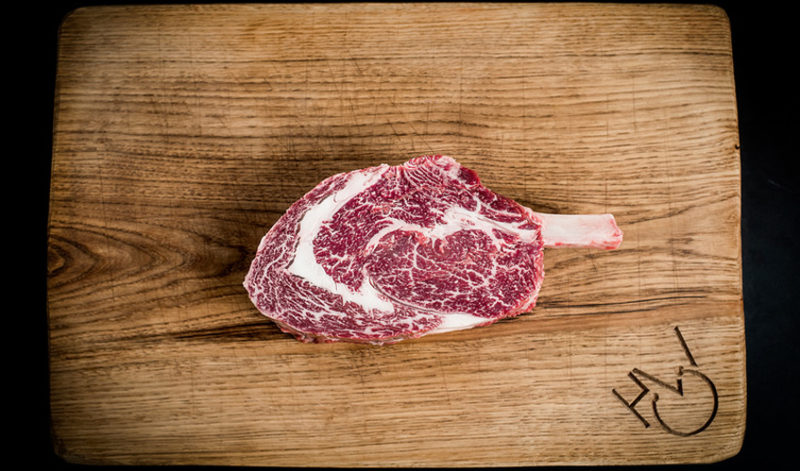 Also mentioned elsewhere on this blog is Melody Adams (of the two restaurants Donostia for tapas & pintxo and Lurra for Basque grilling) at Txuleta (Galician for “beef chop” or “chuleta” in Spanish) which she runs with partner Nemanja Borjanovic, who were amongst the first to start importing Galician and Basque Cider House beef and who supply this stunning Galician rib-eye beauty 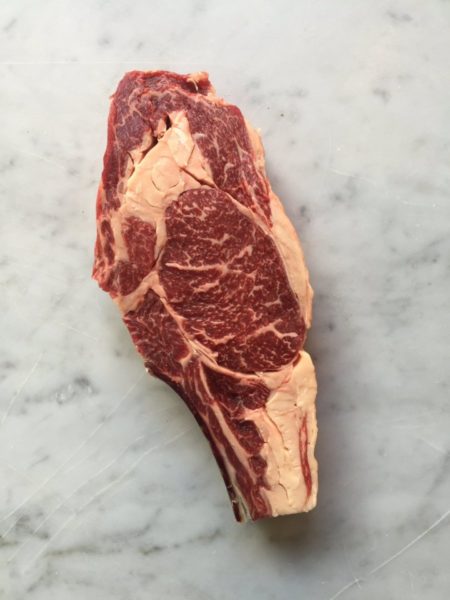 as well as these delights 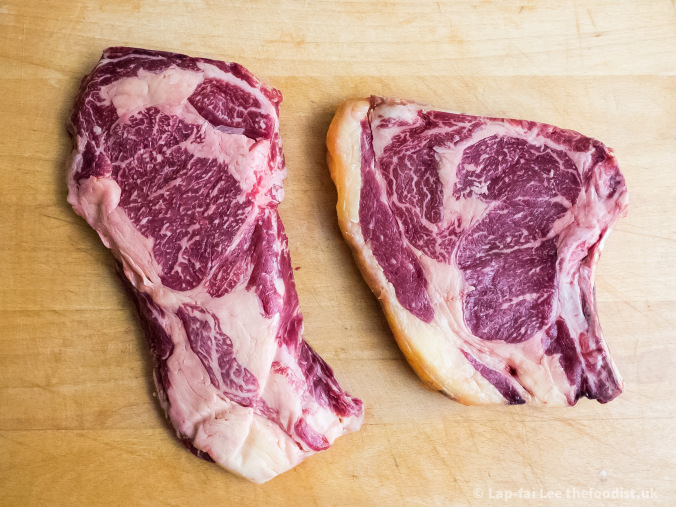 to a rapidly growing list of the top restaurants in London as well as to Jessica Wragg, here on the left behind the counter at the shop in Clerkenwell, alongside Sophie Cumber, at the amazing Turner & George who I’ve mentioned on more than one occasion in the past.

Jess (ex-Ginger Pig) it is who also runs their women only butchery classes.

whilst Soph, formerly of Barbecoa Butchery 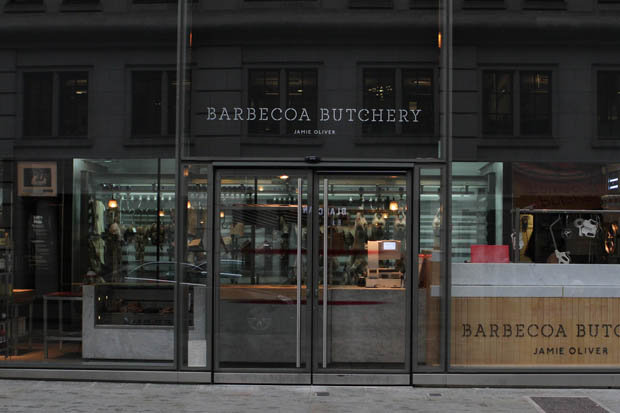 when she recorded this video, is now the Turner & George in-house master.

Age: 27
From: I grew up on a farm just outside of Oxford

How did you get into butchery?
After finishing university I decided that I wanted to work with food, but wasn’t sure in exactly what way. I took the year-long Diploma course at Leith’s School of Food and Wine. During my time there I was most excited when it was a meat prep-and-cook day, and after a 2 day butchery demonstration I was hooked and felt sure that this was what I wanted to do. I grew up on a farm, so good quality meat had always been something that was very important to me, so the decision to work with it made sense. I was lucky to get a job as Assistant Butcher at Barbecoa, where I trained on the job and worked my way up.

And a last shot of their meat temple, taken from the outside. 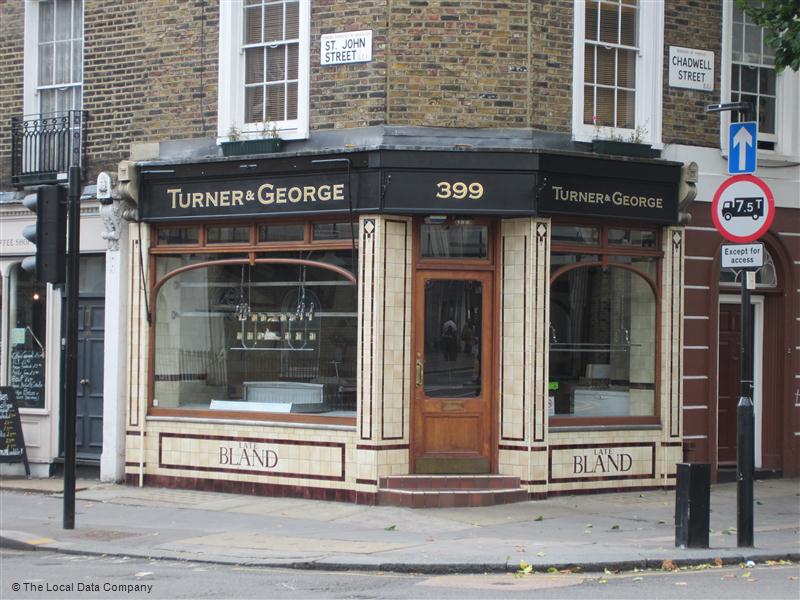 Or consider Sarah-Jane Trueman of Johnsons of Thirsk who as well as setting up the shop, in 2015 was then elected as the first lady Master of the York Butchers Guild. 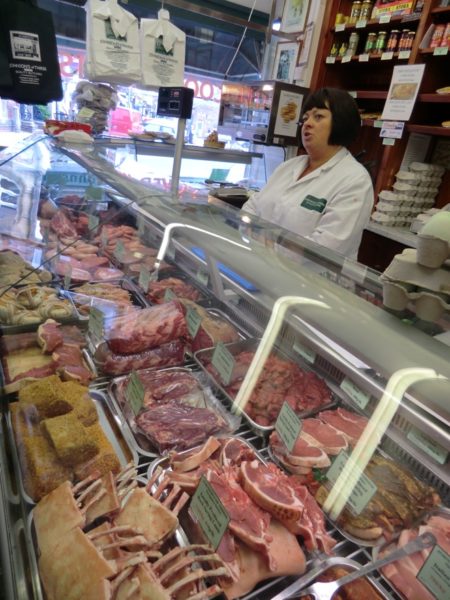 Sarah Jane Trueman is the first lady Master of the Company, she was educated at St. Andrews School, Malton, and after her O Levels she went to Thomas Danby College Leeds, to study Meat Technology.

She was one of only two girls on the course which lasted for three years, she became a graduate of the Institute of Meat and went on to gain her meat inspectors certificate.

Her first job on leaving college was at Dalepak Foods, Leeming Bar, where she was a quality control supervisor.

Sarah Jane went to work for her father, Past Master Ray Ballard, at the family business Johnsons of Thirsk in 1996 and took over the business on Ray’s retirement in 2000.

Johnsons Butchers is a traditional family butchery business which includes a wholesale bakery and outside catering business.  It employs six members of staff.

Meet Julie Lodge, manager (where she has been working for 34 years since starting as a 17 year old assistant), Sophie & Susan of Stokesley Butchers

From Charlotte’s Butchery is the founder, Charlotte Harbottle, here show working in a shot from her own site

and then demonstrating breaking down a whole lamb 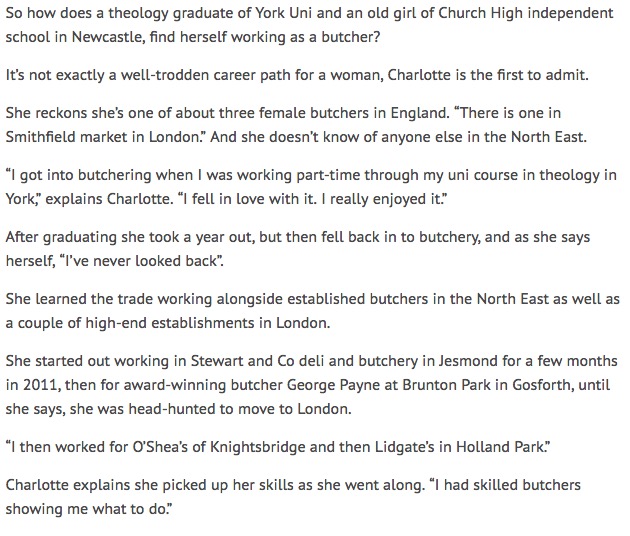 Charlotte describes a typical day “At 5.30am I go to work and begin prep for the shop and set my counter up, or make sausages, cure bacon or make black pudding.” Charlotte sums the job up as “a very physical job and it can require a lot of strength and also repetition. It’s important to keep your eye on the ball and not become complacent”. I naively didn’t think that such early starts would be required, but when you think about it, those fresh sausages don’t just magic themselves. And that’s not the end of the physical demands of the job. Charlotte opens her shop at 8am and carries on creating joints, cutting chops and serving customers all day until it’s time to shut the doors at 5pm “then I clean down and go home!” Knowing all this, it is perhaps unsurprising that the biggest compromise for Charlotte is time “There aren’t enough hours in the day at all. And my biggest reward is my day off – Sunday” she ponders, “No, it’s when a customer returns and tells me they enjoyed what they bought…I love it when a customer asks for an unusual cut of meat, or if I have to get in something special.”

Another butcher originally from the North East, Amelia Watts, now 23, started out as an apprentice at the very same same Charlotte’s Butchery in Gosforth, Newcastle and now works at the hyper-popular  Stoke Newington butcher, Meat 16.

“When I first became a female butcher, I underestimated how physical it was going to be. I have to handle huge pieces of meat, like an entire side of pig, which is kept at such a low temperature that your bones ache and your hands throb with the cold. It can make working with very sharp knives pretty dangerous.

Your shoulders also hurt from lifting and I’ve made so many sausages in a day it gave me a crick in my back. Having said that, I do enjoy it (!) – there aren’t too many jobs where you find yourself physically exhausted at the end of each day.”

More to follow in Part 2, due real soon now…

And one more thing?

Some good news in the battle against so much good food being criminally wasted by the supermarkets, with Sainsbury’s agreeing to join some of the other large supermarkets in reporting upon the amount of food that they save from going to waste. They’ve not agreed to be independently audited yet, so still a ways to go, but this is a start on bringing these behemoths to heel and getting them to act ethically and morally in how they treat their suppliers and their customers rather than in the interests of the hedge-funds. 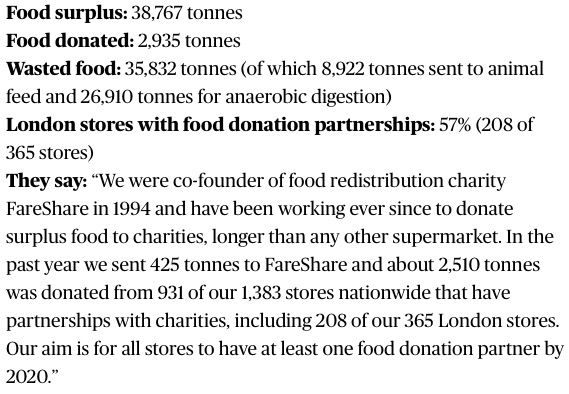