“Pigs have heads. Every one of them does. Farmers do not raise walking pork chops. If you’re serious about your meat, you’ve got to grasp that concept. And if you’re serious about sustainability and about honestly raised good meat … you’ve got to embrace the whole pig.
A farm turns out a head on each beautiful, well-raised pig, but nobody’s rushing to eat it. That’s where the cook steps in: you take it, cook it, make it delicious. That’s the most badass way you can connect with what you cook: elevate it, honor it, lavish it with care and attention—whether you’re slicing scallions or spooning out caviar or boiling up half a pig’s head. Turning ingredients into food, and sometimes almost literally turning a pig’s ear into a silk purse, is what cooks do in the kitchen.”

But bear in mind that’s at the very end of the food chain; the only bit that most of us get to see. So then maybe consider this recent report of 20,000 pigs* dying in the latest massive Dutch factory farm fire; and note that that’s only 10% of the total that have died so far just this year in The Netherlands… 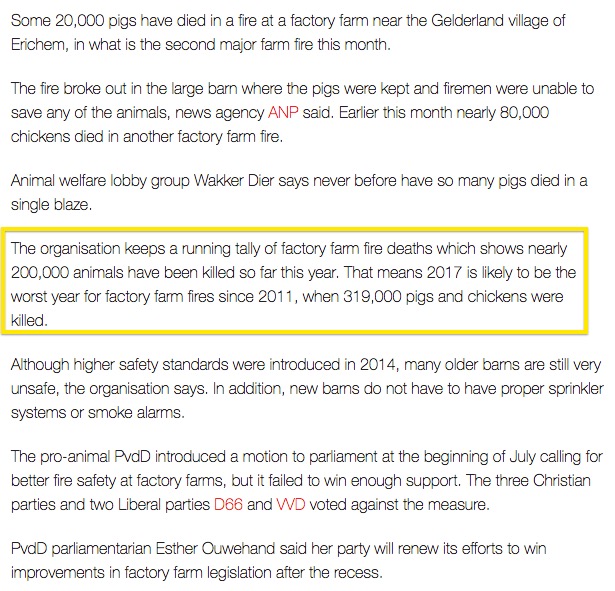 *[and that number was subsequently raised to 24,000 dead pigs]

And this is what such a tragedy looks like; the pig equivalent of the Grenfell Tower disaster in London this year (2017). 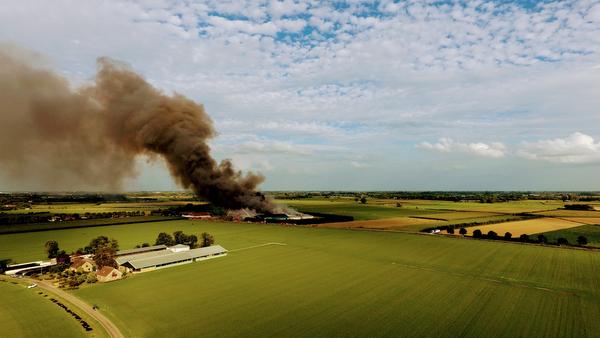 The building is now left like this, twisted, derelict, blackened. I can only begin to imagine the stench emanating from that on the night. It will have polluted the atmosphere for miles around.

In the UK we’re moving simultaneously towards yet more of these horrendous factory farms being approved whilst, at the same time, the building momentum across all groups towards a better, healthier approach is daily, more and more evident. Here’s a video from Hugh “Rooting For Real Farms” Fearnley-Whittingstall from River Cottage & local farmer, Peter Greig from Pipers Farm. 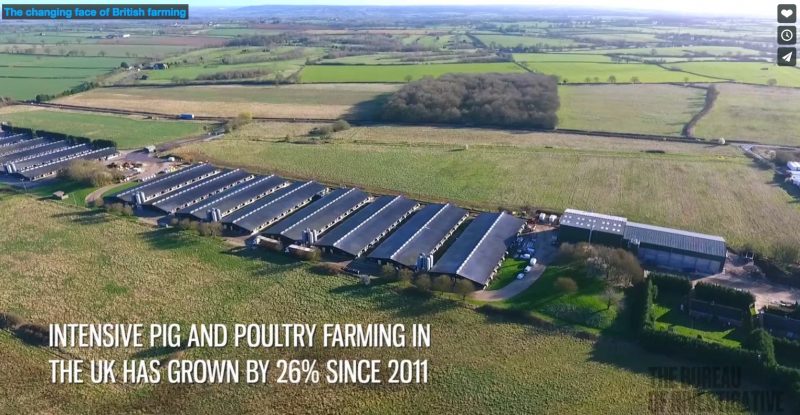 There’s a long, fascinating, well sourced & researched piece on the growth of and the rationale behind the rise of factory farms in UK by the Bureau Of Investigative Journalism. It should be remembered that this move to making food production an industrial  process — just like turning out cars or stamping out moulded plastic goods — isn’t new. I remember the move away from the ‘old’ methods of keeping pigs with free access to the outside world, with deep straw bedding, room to move and explore and the ability to root in the earth, towards the ‘new’; being contained indoors all the time, on concrete floors, over slatted drains, even when I was growing up on pig farms. It wasn’t obvious to me then that this process would continue and grow and dominate the industry; I was naive and unseeing.


In this piece, local rural residents — note, not rich absentee townies with 2nd or 3rd “homes in the country darling” — say how these factory farms ruin their quality of life, their health, the countryside and soil and environment.

This isn’t a NIMBY attack on something that is needed; the countryside has always been a little smelly, a little dirty, noisy with animals. This is a moral objection by people who live and work there — often on small, natural, organic or similar farms —  to the factory-farm process of treating animals like die-cast items to be used, abused, discarded and turned into (frankly crappy, horrible) meat.

It’s a complaint across the globe — here in North Carolina (an area flagged by Michael Pollan and others as one that has been over-run by factory farms and the polluting sewage they produce) the residents say the same thing. 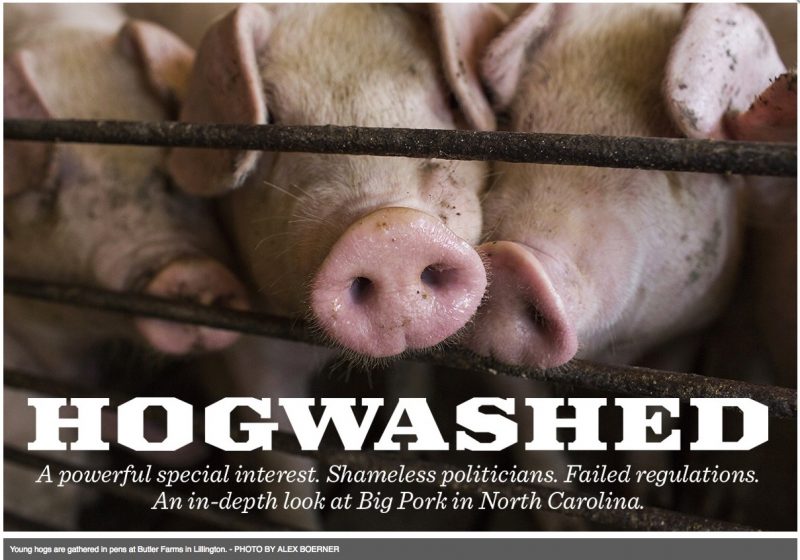 This first story (included below) examined claims by the poor, mainly of course, African-American residents of eastern North Carolina that neighbouring hog farms have polluted their properties alongside ongoing efforts by the very lawmakers who are supposed to look after them, to shield pork producers — who pay far more in campaign contributions than do working class people — from litigation. In the US, factory farms are handled under legislation that relates to factories, to industrial premises and not those laws targeting farms & farmers. They thus have huge leeway in how they run and manage their operations in a way that — if they were classed as farms — would be quickly ruled illegal and would, rightly, see them closed down.


The second part, available here, looks at the same environmental impacts we’re seeing here that hog farming has had over the last two decades, particularly on one of the local waterways, the Neuse River. The final part of this hugely interesting and excellent piece of journalism, available here, discusses ways to make the multibillion-dollar hog industry more sustainable, both for the environment and the state’s rural population, and the political and financial reasons those steps have still not been taken.

So, do I think factory farming is fundamentally flawed, broken and just plain wrong? Yes. I do. Do I have a simple, quick, cheap solution, one that will allow us to move back to ethically produced and farmed meat? No. I don’t. But in these pieces here, in others that I’ve written on this blog, in the books and articles I cite, there’s a path emerging that we have to follow. One that involves less meat in peoples’ diets, more vegetables, pulses and non-meat proteins. A path that means that governments properly regulate, manage & prosecute if necessary producers that fail to follow ethical, kind, moral practices.

We have to rebuild totally, the current farm system. And if that means lots of factory farms go under, then good. Easy for me to say, I know. I can afford to pay more for my food, I have that luxury, that ‘cushion’. Thousands, millions of people don’t. But, like global warming, like racism and discrimination, like the fight against slavery, the work to mitigate and remove these threats has to continue and grow now.  In twenty years, it may well be too late for the planet and the humans that cling, oh so very precariously, to the surface, to turn back these tides.

“The best time to plant a tree was 20 years ago. The second best time is now.” – Chinese Proverb

Oh, and hogwashed? As well as the title of the pieces above:

As they say ‘Oop North’ (in England that is):