I recently bought two books with the same title (“The Whole Hog”, just in case you hadn’t guessed). One, by Lyall Watson, is a paean of praise to the pig, written by a hugely knowledgable naturalist with some impeccable research work undertaken but still presented in a truly engaging and enjoyable manner.

He argues, strongly and cogently, that the intelligence and physiognomy of the pig has been massively under-researched (& under-rated) by scientists, in favour of other animals and species that appear easier to and more worthy of, study. He suggests, no, pretty much demands and cajoles, that this attitude needs to change. After reading this, you’ll almost certainly agree with that conclusion. 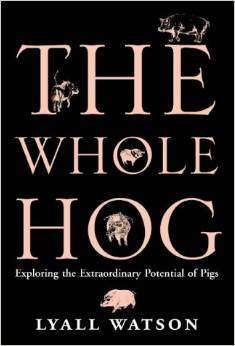 The Whole Hog by Lyall Watson

It was reviewed in The Independent in 2004:

One of the best lines in Tarantino’s Pulp Fiction occurs when the Samuel L Jackson character declares that he would only eat pork if it came from “the Cary Grant of pigs”. This engaging volume reveals that such a porcine paragon is far from a rarity. Lyall Watson insists that a warthog of his acquaintance was “a gentleman … extremely clean and painstakingly polite”, while a Sulawesi wart pig proved to be “a charmer”, “impossibly good-hearted” and “an incurable optimist”.

Watson has written a paean to the pig in all its splendid variety, from white-lipped peccaries, notable for their social “barking and squabbling, moaning and retching like football fans on their way home from a lost match”, to African bushpigs, whose care in eating a root without disturbing the leaves, flowers or fruits “looks like deliberate cultivation – husbandry by pigs”.

We learn that pigs are “the most accurate localisers of sound in the animal kingdom,” but their “chief executive organ” is the snout. Not only does it send a vast amount of information to the brain (the pong of each pig is “a cloud of information that amounts to a detailed curriculum vitae”) but the snout is extraordinarily expressive, “capable of looking beatific, kindly, wise, amused, thrilled or just plain bored to death”.

The pig was taken into the human community around 20,000 years ago, as early as the dog, “and with a great deal more to recommend it”. Ready-made for cohabitation, pigs are versatile feeders, hugely gregarious, and don’t need to be herded. They are clever, with brains proportionately larger than cattle, sheep or antelopes. Pig brains “are not unlike our own. There is little but size to tell them apart.”

Like us, hogs are omnivores. This willingness to engage in gastronomic experimentation rather than eating the same old stuff plays “a large part in enhancing intellectual creativity”. Intelligence is required for rooting, a skill that benefits us when the pig is drawn to the perfect synthesised copy of boar testosterone emitted by the black truffles of Perigord. Displaying “extraordinary genetic persistence”, feral pigs begin to take on the appearance of wild boars within a single generation.

Watson embroiders his porcine love letter with a host of detail. Did you know that the original Uncle Sam was a New York pork-packer who supplied US troops in the war of 1812? Or that pigs outnumbered people in 19th-century North Kensington by three to one? Insisting there is evidence that pigs “are capable of abstract reasoning”, Watson is at a loss to explain why they are largely ignored by the scientific community. Possibly we refuse to countenance the pig’s similarity to us – other than utilising its heart for replacement mitral valves – so we can continue consuming pork and crackling without a pang of conscience.

Buy it. You won’t regret it.

The second one with the same title, by Carol Wilson and Christopher Trotter (and isn’t that latter a wonderful case of nominative determinism?) is a, perhaps, more slight (but still an) interesting read. There are some great recipes, some equally delicious looking food-porn photos and some useful additional nuggets & titbits of porcine information that I’ve added to my memory store. 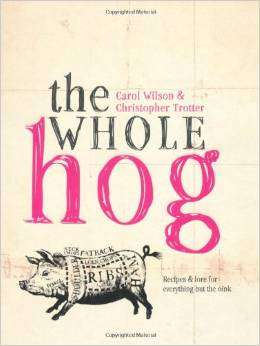 This is the description from Amazon that sums it up well:

This book is much more than a cookbook; it is a celebration of the pig and all its parts – a unique blend of historical, geographical and culinary interest, together with clear explanations of how to cook the different cuts of pork and over 100 delicious recipes from chef Christopher Trotter. The pig has been domesticated throughout Europe since ancient times and the result is a variety of magnificent meat products with a fascinating history. The Romans introduced the sausage as a nutritious portable food for their marching legion (centuries later Louis XIV and Napoleon were also known to be fans), while Ardennes ham was praised by the ancient Greeks for its flavour and texture. The idea of being able to cook “everything but the squeal” of a pig permeates the recipes which are informed by the traditions covered in the main text. Completely international and full of fantastic photographs and an engaging text this book will be a must-have for any pie fan, bacon-sandwich supporter or sausage addict.

Oh, and one last thing. The Watson book made mention of and thus introduced Val and I to two drawings by Rembrandt that neither of us had seen before. Nothing more needs to be said — they speak for themselves. Just gorgeous: 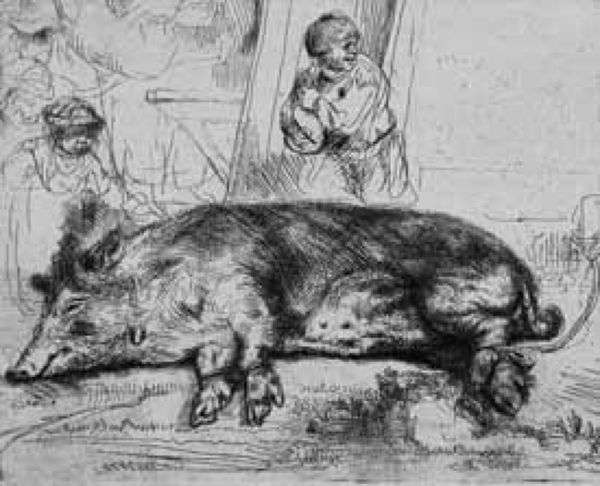 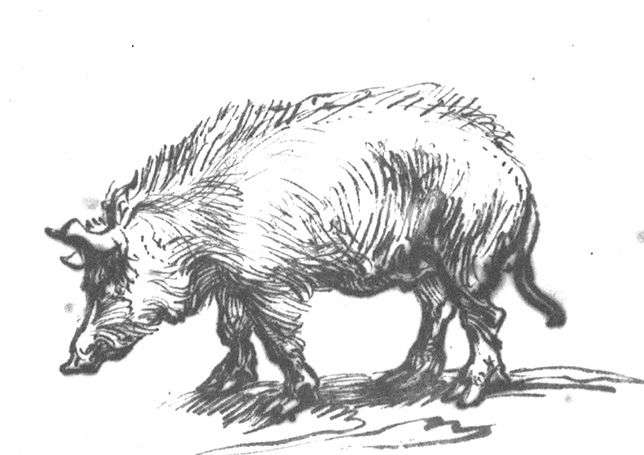