How many food books does one person need? I mean really?

To be honest, I’m not sure there’s an easy answer to this one…

Like the (upcoming) Tools Of The Trade post, this is another area where you could spend huge amounts of folding stuff. That said, I don’t think my own recipe/cooking books habit is yet quite a “you need to check in to The Priory today” one as that shown by this chap, Jon Tseng, who, at the last count had 296 on his shelves and appears to have read them all and then written a long, detailed review. And he’s a good, passionate writer on food, so if you’ve time, take a look at his blog as well…

There’s probably 30+ books on the shelves here (and a few more sitting in the Kindle, some deliberately “duplicated”, which is actually very handy for when I’m in the kitchen trying to emulate — even if only as a pale shadow of the original — the delights shown on their pages), so for these next few pieces I’ve chosen to limit myself to covering only the half-dozen that I most find myself revisiting, whether for recipes and guidance or just because they’re beautifully written. Or both.

That said, they, along with the ones not mentioned here, will also be getting more in-depth reviews on the Tasting Notes page — but as some of you may already have noticed, they’re not there yet. There’s only so many hours in the day that I can devote to this, so stop sighing quite so loudly at me eh?

So, ordered only by size (and that vaguely), here we go. 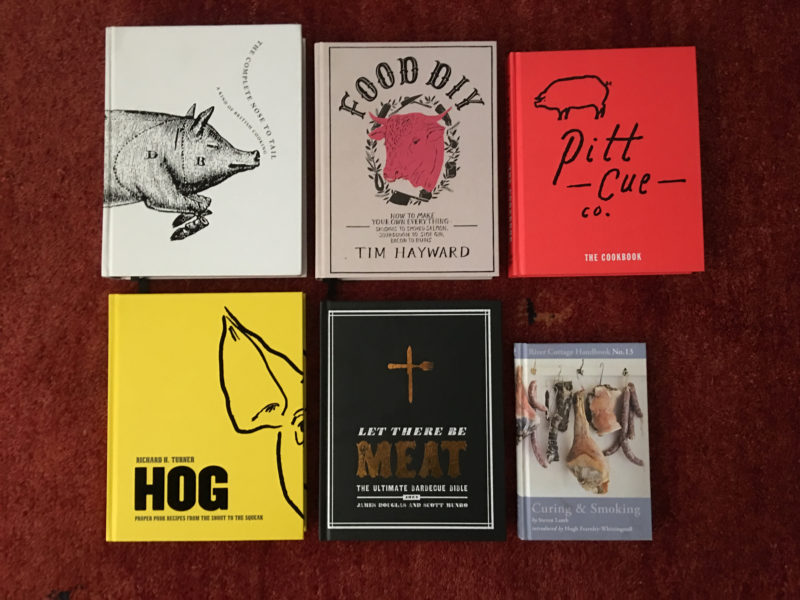 Oh, wait! One last thing before we jump in.

I’m very aware that those books shown here are authored only by white (and often hugely bearded) males. There’s two comments I’d make here: (i) unfortunately, there still aren’t enough women cooks being given the chance to write and have their books published and that’s a totally crap situation and needs to be changed – stat! and (ii) I do have books that have a woman as the writer and indeed actively search them out, partly because I don’t want to come across (as in my view, more than a few of the male writers do) as overly “muscular” or giving off that whole “I’m a caveman, killing the savage beast with my bare hands & then cooking it over a red-hot fire pit” vibe & partly because they’re often a whole lot better than the latest hot (male) chef who just happens to have been given a book contract.

Some of the most enjoyable and interesting writing of course (true as in any genre) comes from the non-males in the kitchens. Two great examples — which I have on the shelf — are April Bloomfield’s “A Girl And Her Pig” (with a wonderful picture of April with a pig carcase draped lovingly across her shoulders) and “Blood, Bones & Butter” by Gabrielle Hamilton. Actually, make that three, as there’s the classic “Charcuterie & French Pork Cookery” from Jane Grigson up there as well. So, as a mea culpa for any offence I may have given to date, I fully intend to devote a lot more time to talking about these three (and others). Including now, funnily enough, two more that I came across only this morning whilst researching this piece: “Odd Bits: How to Cook the Rest of the Animal” by the obviously hugely prolific Jennifer McLagan and “Offal: The Fifth Quarter” by (the hitherto sadly unknown name, to me, of) Anissa Helou.

And of course, there’s no way of not mentioning Margot Henderson, total partner in crime with and wife of Fergus as well as chef and owner in her own right, with her “You’re All Invited: Margot’s Recipes for Entertaining” to cover.

But just not today, OK?

Let’s start with Fergus Henderson’s “The Complete Nose To Tail”; a man who originally trained as an architect and along the way to food deity-elevation also battled Parkinsons.

‘It would be disingenuous to the animal not to make the most of the whole beast; there is a set of delights, textural and flavoursome, which lie beyond the fillet.’ Thus Fergus Henderson set out his stall when in 1994 he opened St. John, now one of the world’s most admired restaurants. © Amazon 2015

It’s now over twenty years ago that Fergus & Margot opened St. John. And the food world was rocked on its axis. Offal would never again be seen by people in the same light.

In 1993, Fergus was working with Jon Spiteri running their restaurant above the French House pub on Soho’s Dean Street, while Trevor and a friend had created the Fire Station at Waterloo. In early 1994, the success of the Fire Station led to an offer of the run down smokehouse building that was 26 St. John Street in Smithfield. Through the medium of the olive oil man, Trevor, Jon and Fergus met. Lunch (and dinner……) was taken and St. John Smithfield opened in October 1994. Jon’s and Fergus’ wives took over the French House, moving on to the Rochelle Canteen a few years later and Jon left after a while to do other things.

Sounds so simple and I suppose, in a way, it was. There were far fewer expectations then, far fewer examples to be judged by. But this group of friends totally remade how a restaurant was supposed to look and work and what it was supposed to do. They wrote an (unwritten) rule book that still stands today about how to treat food. With respect. With love. Nose to tail. As my mother used to say (and as I’m sure also did Fergus’) – “waste not, want not”.

Bourdain, himself not a stranger to the wonders of offal and parsimony of cutting, said very much the same recently.

He is a walking Buddha to chefs all over the world, a total rock star. He opened the doors for people to start questioning the conventional wisdom of the restaurant business, built up over hundreds of years. He absolutely changed the world, and now everyone wants to cook like Fergus. Anthony Bourdain 2014

So, what did he give us? I’ve chosen just two recipes to illustrate the genius and range of this man.

One involves the use of tripe. One is very simple. And there, in a nutshell, is why he is so good and why he’s been and remains so amazingly influential. Tripe I’ve talked about before (in “What a load of tripe”)— it’s not everyone’s favourite part of the beast (indeed the very mention of it makes certain people I know gag & retch — take a bow Val — and I’m guessing a lot my US readers will have the same reaction) but it’s also very much part and parcel of the “use everything; waste nothing” mantra that I’ve been banging on about, whilst simultaneously taking this humble (albeit traditional) ingredient and making of it a hugely tasty and appetising dish.

The second is so simple — Blood cake and fried egg — as to make you wonder why it even needs a recipe. Yet again, that’s where his genius shines through. Like his rightly fêted roast marrow bone with parsley sauce, it’s just two simple ingredients, cooked simply and put together on a plate. But which when they then meet in a coruscating dance of angelic fervour on your tongue make you wonder how it can taste so damn good! Bourdain says he would go back again and again and again, just for the marrow bone dish, if he had the chance… 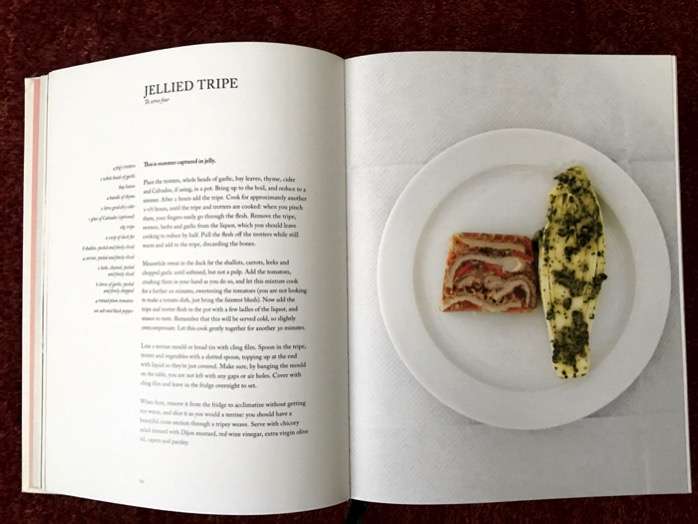 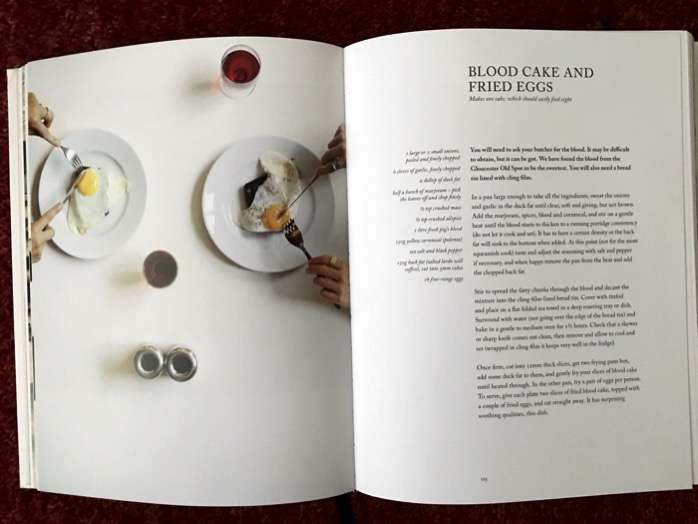 There is also an arms-wide open spread of non-offal related dishes, arranged in such wonderfully named chapters as ‘steadying puddings’ giving us an apple and blackberry cobbler, bread pudding and sticky date pudding, the ‘smaller but often sustaining dishes’ (e.g. the afore-mentioned roast bone marrow along with deep-fried calves’ brains and duck hearts on toast) or ‘basic, but vital’ (e.g. stocks, clarification, brining, spicing and rendering) and a wonderfully informative section by another alumni of St. John, Justin Piers Gellatly (described rightly as “a king among bakers”) on breads and baking, which includes a sensibly detailed method on making your own ‘mother’ for sourdoughs (also covered extremely effectively in one of the others I’ll be taking about later, Tim Hayward’s “Food DIY”).

It’s the huge, huge, huge attention to detail and just plain, “hard to put your finger on but you know it when you see it”, quality that makes this masterpiece rise head and shoulders still above the recent glut of “celebrity” chef books, even down to the importance it places on side dishes & accompaniments, a subject that’s often ignored or added as a perfunctory afterthought, in so many other, lesser, cookbooks.  Who among us could resist, for instance, the fantastically named ‘orbs of joy’ (better known to you and I as simple braised whole onions)?

There’s no way around it — this is a stone classic and will remain so. Beg, steal, borrow, buy, whatever a copy and refer to it often.

And finally the “one last thing” for today; let’s put our hands together for a relatively un-sung* hero of food nerdy; ladies & gentlemen, I give you Justus von Liebig.

As well as doing some great research (“I’m going to have to science the shit out of this”) on plant nutrients — and there’s huge amounts of detail out there on how important he was in moving this branch of science forward — Justus also developed a manufacturing process for beef extracts, his realisation that yeast extract could be concentrated led directly to the Marmite that (some of us) love today, he also founded a company, Liebig Extract of Meat Company, that later trademarked the Oxo brand beef bouillon cube and was one of the first suppliers to offer “corned beef” from a little place called Fray Bentos in Uruguay.

Phew! Another over-achiever to make me feel inadequate… 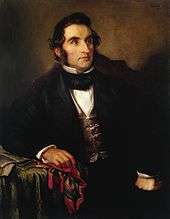