“If you dream about a pig, you will soon have good fortune”.

That’s apparently a Korean superstition. Dreaming about pigs (and their by-products), very very frequently, as I do, I’m more than a little disappointed that the promised lottery win hasn’t yet materialised. Dammit to hell. 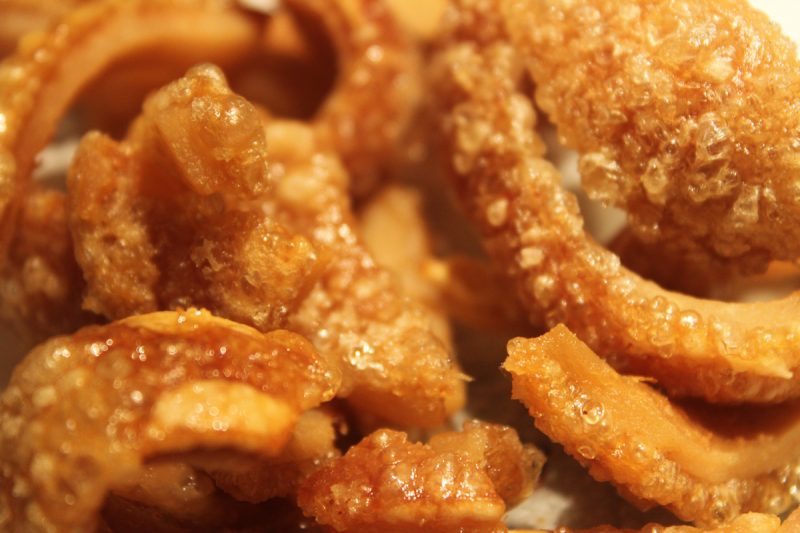 This recipe for pork scratchings is the Clint Eastwood of pork crackling; one that stands alone….

Basically, whatever scraps are left over from butchering and trimming a pig can become scratchings. Whereas crackling is what you get when leaving the fat and skin on the meat — the canonical recipe for which is here. And there’s a great little site called Hairy Bar Snacks which you really should read which is an encyclopaedic guide to all things cracklin; scratchin’ (and even chicharrones).

The quantities given below should result in around a kilo of edible loveliness being produced.

1. Freeze the pork skin for at least an hour, not so that it is frozen solid but so that it is at least pretty stiff. Slice into slivers about ¾ inch thick and about 1 inch long.

2. Heat the lard & oil in a large cast-iron pot over a medium heat around 170°C. Add the pork, a little at a time. Use a good thermometer (like the thermapen here) and keep checking & regulating the temperature so that it doesn’t fall below 150°C nor go above 180°C. You’ll find that as the pork cooks, it’ll render even more fat. Cook for between 20 and 25 minutes and, using a pair of long tongs, turn the pieces of pork until it’s floating in the oil. You’ll know they’re done when they turn golden brown and crispy.

3. Use a skimmer or slotted spoon to scoop the results out of the fat and drain on some paper towels. Season immediately with some sea-salt; nothing else (well, a la Egg you could “kick it up a notch” and roll them in some chilli powder I guess). Then, try to resist temptation and let them cool to room temperature or at least to something slightly less hot than the surface of the Sun.

4 The easiest step: Eat. With beer. Or if you’re very strong willed, I suppose you could store them away for another day. They’ll be fine kept in jars or resealable plastic bags and can be held at room temperature.

And finally? How about this delightful image from the Public Domain Review, entitled The Spinning Sow? 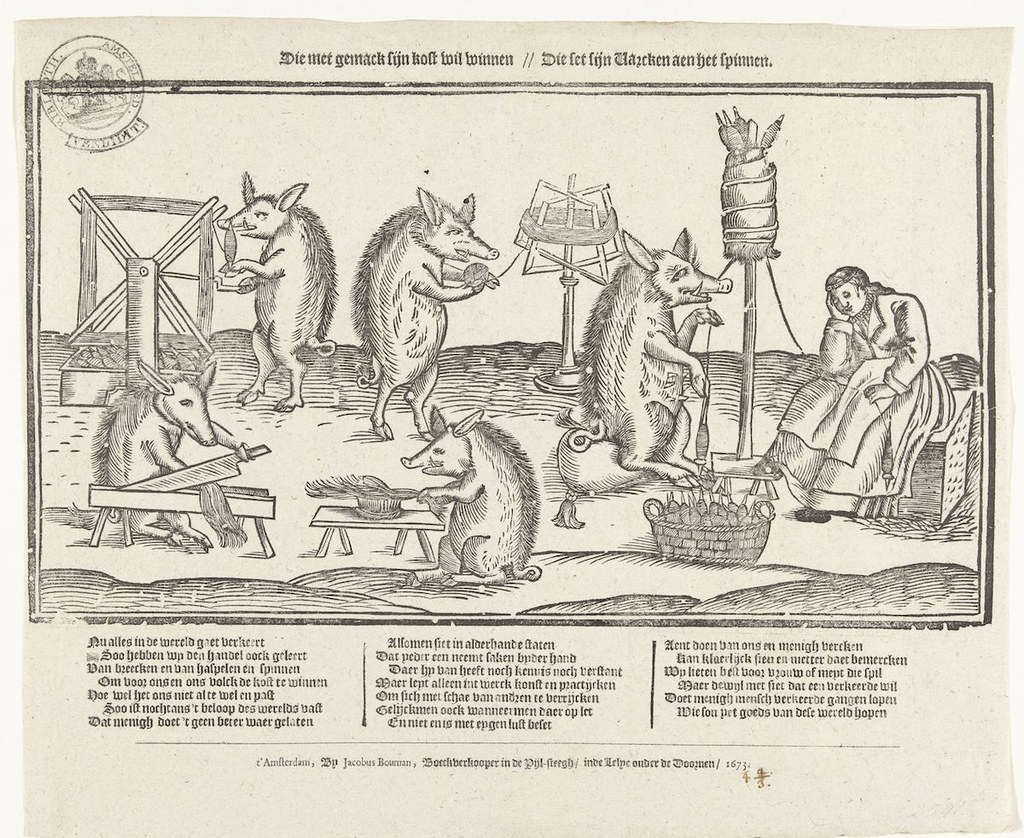 They go on to explain it thus:

In this 17th-century Dutch engraving a team of pigs are shown spinning flax, while in the corner a woman — who’d normally be associated with the work — sleeps. Across the top runs the rhyme “Die met gemack sijn kost wil winnen // Die set sijn Varcken aen het spinnen”, which can be roughly translated as “He who easily wants to make a living / should put his pig to spinning”. Rather than a serious suggestion for female empowerment through porcine labour, we can almost certainly take this to be satirical in tone. The artist here seems most likely to be referencing, at least to some level of remove, a popular medieval motif of the “spinning sow”, an image with often distinct misogynist associations.