This lady gets it.

“An average domestic pig at six months old is already hitting 70-80kg, and ready for slaughter,” she said. “But these are going on longer and to my mind it is better because we have got good pigs who are happy and free-ranging and we have got [slaughtering] facilities as near as possible.

“We name these pigs and we talk to them. We have loved them and fussed them and given them a fantastic life, and even the butcher has said they are not stressed – and you can taste it in the meat.

“You can hear other pigs going past on trailers, and they are all squealing. A happy pig does not scream and shout. We sometimes have some fun and games getting ours onto the trailer, but other than that they don’t make a sound going to slaughter. They get off the trailer happy and wagging their tails.

“To my mind that is proper farming. It does not matter what breed you have got, the meat will be better if you put a bit of time into it, and give them a bit of fuss. Happy pigs give you better meat.”

She’s talking about the Iron Age pigs farmed, along with ex-carpenter Peter Jackson, on a 10-acre site at the aptly named Wild Hog Farm at Blackborough End, near King’s Lynn.

I’d not heard of these pigs before. I came across my first mention of them on the website for the Islington based, “Pig & Butcher” pub with chef Michael Chan 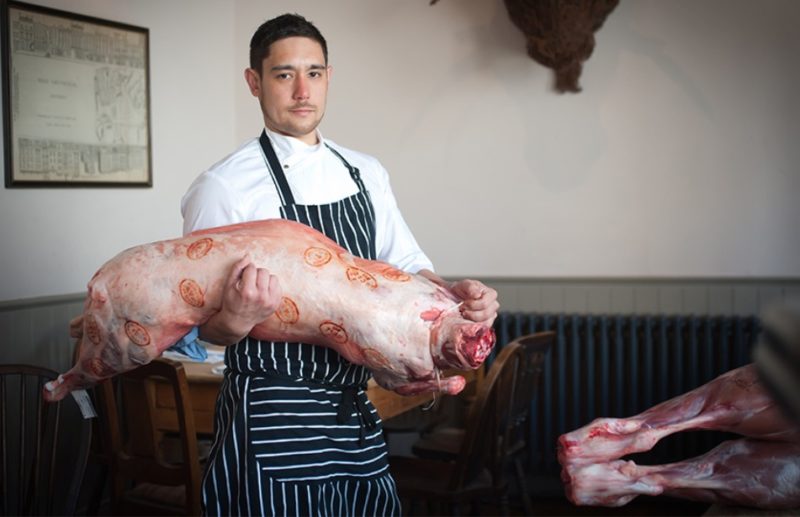 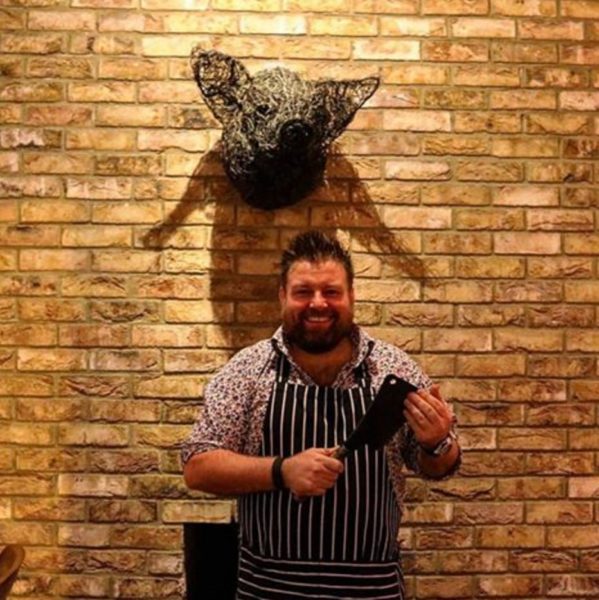 who answered my questions about how they use this pig and where they source it. Simple answer? Used like this; and sourced from animals farmed by Mark Leatham at Lyons Hill Farm in Dorset: 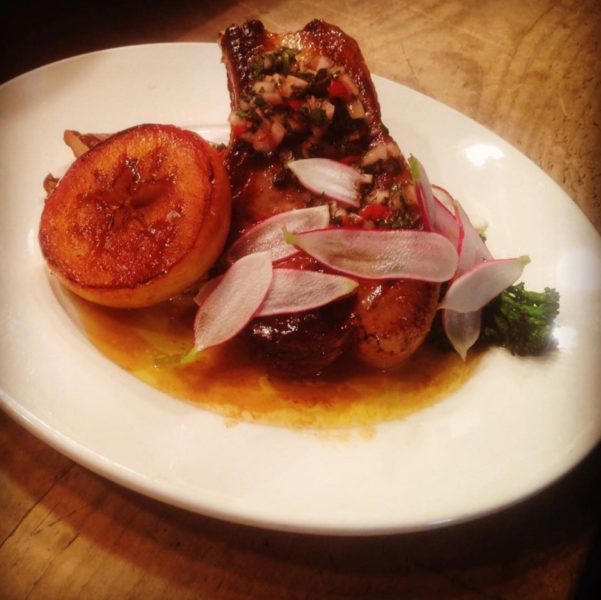 They’re a distinctive looking cross, one first developed for a BBC documentary (whose name I’ve been unable to find, sorry) by farmer Joe Henson — the BBC’s current “Countryfile” presenter, Adam’s, father  — back in the 1970s. One downside is that, like many crosses, you can’t consistently breed true by merely “matching up” two Iron Age animals. Their wild genes dominate to such an extent that often the domestic traits disappear in as few as three generations. And they’re known (more poetically to my ears at least) as “Sanglochon” in France.

Joe took a Tamworth and a wild boar and produced a pig that showed many characteristics of what would have been the very earliest domesticated animals from the Iron Age period — most especially visually — whilst being much easier to manage and it became one that was rapidly taken up by TV and films, where the more feral wild boar would have wreaked (no doubt hilarious) havoc on set…

The inevitable government paperwork is easier to manage as well, as there’s also no requirement to have a Dangerous Animal Licence (unless you’re keen on breeding directly from a wild boar rather than buying one of the crosses). The piglets, which can be black, ginger or striped (in this, they’re very similar to wild boarlets) are both irredeemably cute as well as feisty, so experienced breeders such as Sue suggest that anyone wanting to try this, buy in some weaners from around the age of 6-8 weeks, then grow them on, for their lovely, gamey meat.

Like all pigs (even those truly wild ones still extant), they’re hugely social animals, so should be kept together with two or three others but are able to live easily on a half acre of land with just an “ark” for shelter. One thing to plan for is to divide this area, so you can rotate their location in bad weather to avoid the ground becoming too damaged as those hardy genes mean they’re not fearful of living outside all year. Notably hairy, they aren’t so keen on the rain though, or indeed wallowing — although if you do provide a suitable area, they’re at least prepared to dip their hind quarters. And because of this hirsute protection, they’re not afraid of a little sunbathing.

These same wild genes means they’re particularly tenacious and ace escapologists (and with the Tamworth Two as an example who’d doubt these abilities?). Make sure your fencing is particularly sturdy, with maybe a strand or two of barbed wire at the bottom; this may help to discourage them from rooting at the base and then rapidly disappearing underneath. And watch out for the piglets…

Iron Age pigs are slower growing than a lot of the modern breeds and with their lean and leggy physique, they take up to 18 months to reach their proper slaughter weight. A further complication is that the boars are sexually active from around 4 to 5 months just when the more modern breeds would be being taken away for processing. Like a precocious teenager, this means that difficult (read “hard to control”) male behaviour is fully developed some little time before they’re ready for slaughter.

They remind me very much of the heritage of the French Noire de Bigorre and I’m sure taste just as good. We’re off there (Islington that is) at the earliest sign of the Iron Age (re-)appearing on the menu.

And one last thing? The pig cast iron bacon press — something that I think I may look at producing, suitably “Salute The Pig” adorned.. 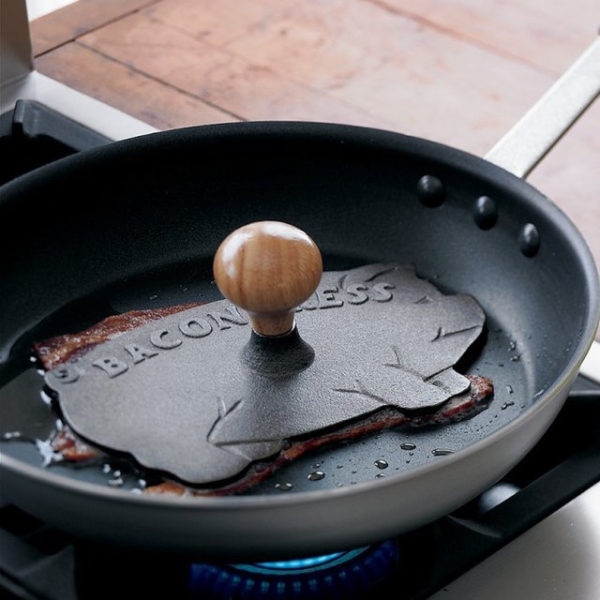