I see that the last update here was back in May. Sorry about that. Kind of.

Three months later and we’re still in the middle of the pandemic. I have to say I don’t feel appreciably safer than I did when we first went into lockdown, so new indoors eating locations or even travel with others crammed alongside, is still off the table for some little while.

And as I’ve said before, I’ve not felt hugely like writing either. I know some people are turning out finely honed masterpieces — some apparently almost daily — from their front-rooms. All credit to them. My brain still feels pretty much to be the consistency of congee and with little, if any, creative spark coming fighting its way out to see the light of day.

That said, here’s a few things that have brightened my time at various points over the period:

If you’ve not seen this publication before, I’d strongly recommend you subscribe here. It’s full of great, creative, exciting, inspiring writing. There’s a focus on cooking outdoors, obviously, but it covers far more than that. Some of the best food writers around are featured. 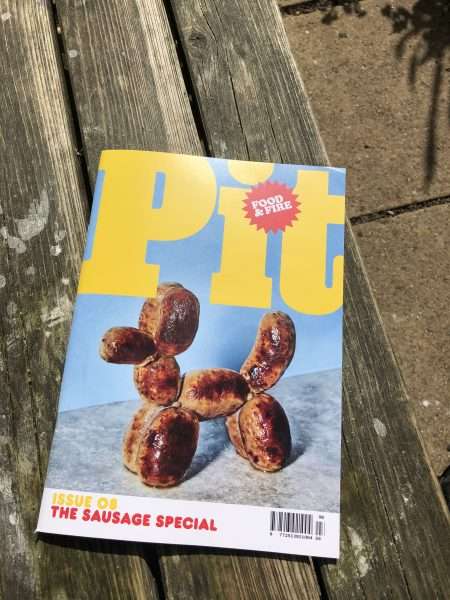 A great daily newsletter edited and produced by the inimitable Jonathan Nunn. His work in highlighting & pushing front and centre, food writers decidedly not yet from the main-stream (i.e. hitherto white, CIS, male) is a delight. I already read far more diverse, interesting and often emotionally fascinating writers than I did before. You can read some articles for free but please, subscribe to support this effort. 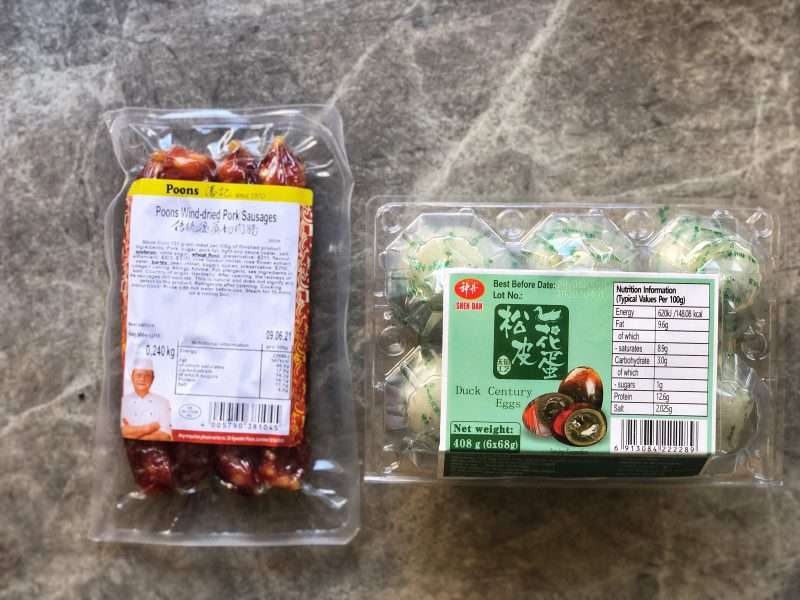 Not sure where I saw this sausage talked about first, but was recently reminded of it in a piece on Poons Chinese Restaurant in London in the Pit Magazine, and it’s made — along with quite a few other ingredients — with rose-water. Before this piece, if asked, I’d have said that rose-water came from the Middle East cuisines, maybe Persian if asked to be specific. But then, thinking further, of course it would be used in China. Why wouldn’t it? Their encyclopaedic use of everything as a flavour or texture or smell in their cooking, implies no less. It IS also used in the Middle East but the then Silk Trail, linking the Med and the cities of China with stop-off points all along the way, was always a melange of the peoples and countries that it linked.

The sausage? They taste great. A depth of flavour and spices that, on their own is enjoyable, but incorporated as an addition into other dishes, really pushes the taste number towards 10 on the dial. Use it in fried rice or as one part of a dim sum filling.

I bought mine from a fine company called Sous Chef.  They’re my go to source for a huge range of harder to find — esp. out in the sticks here in The Fen — items. Recommended. They also supply century eggs. I bought a box as you can see in the photo.

”Century eggs, also known as pidan, thousand-year eggs or millenium eggs, are a famous Chinese delicacy. Traditionally, the eggs were pickled in brine and then buried in a mixture of coals, chalk, mud and alkaline clay. Although no recipes keep the eggs for a thousand, or even a hundred years, the curing salts do mean that the egg is preserved for many months without the need for refrigeration.

Century eggs are almost translucent – the preserving process turns the egg white jelly-like with a brown-black hue. Century egg yolks are a deep greenish-blue with a slightly cheesy, fermented flavour. The outside of the white sometimes develops a stunning pattern, reminiscent of snowflakes or the branches of a pine tree. This gives rise to one of the egg’s Chinese names – songhua dan, or pine-patterned egg.

Century eggs are ready to eat. To serve, just peel and slice into wedges. They are traditionally served as an appetiser along with pickled ginger. But perhaps the most popular way to serve century eggs is with congee – a thin soup or porridge of rice and water – for breakfast. Other condiments served along with congee include preserved bean curd, pickled vegetable, spring onions, and tofu.”

4. A Bite of China & Flavo(u)rful Origins

Two series that highlight really well, the (possibly) less known areas of Chinese food. Both are narrated by Chinese speakers but the sub-titles help here. That these aren’t being covered by Western, white travellers is a joy. Instead of the “ooh, look what I, the first white man since Marco Polo to eat here” style appropriation, you have locals proudly delighting in the huge range of ingredients and techniques.

The first of these is made up of three series. The second of these is available on Amazon but the other two can be found with some judicious searching. The words “download the Torrents” never passed my lips of course.

Shot in around 60 locations in China, just look at some of the foods and ingredients… 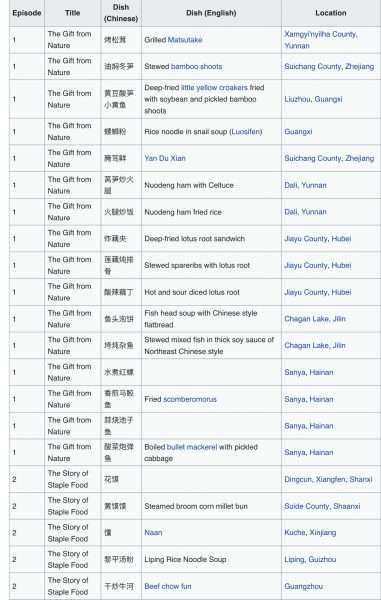 The second comes via Netflix. 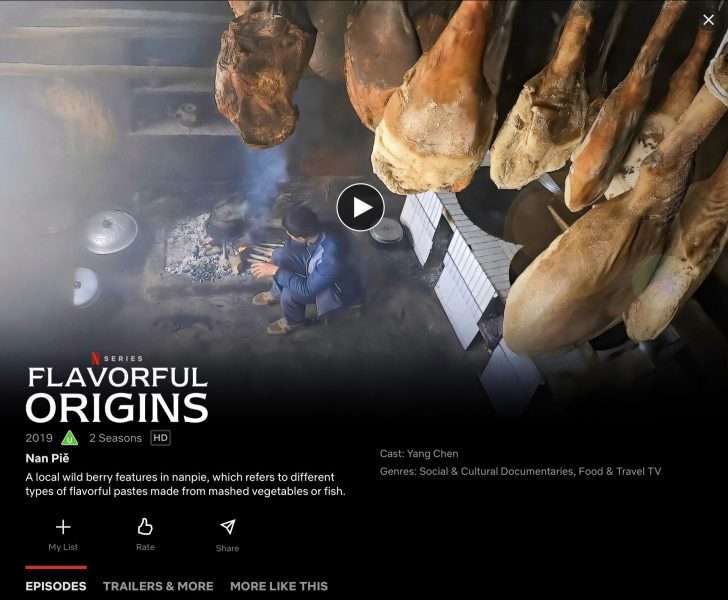 There is so, so very much for me still to learn and enjoy. So little time. But these two are well worth your time. If nothing else, it’ll make you realise how amazing the cleaver is as the only kitchen tool you’ll need, when used by people who know how to handle it.

I’m barely past the stage of not losing a finger to its fearsome heft.

From a piece by Jonathan Nunn in Pit Magazine, I learnt of this. His background is Goan. Living in London now, he writes of how he and his sister hated the smell of this when cooked by his mum. So much so, that, as he puts it

”our Mum would have to shut herself away while making them and eat them in solitude. They were part of her identity that she had to keep hidden from her children, an identity we literally found too unpalatable”. 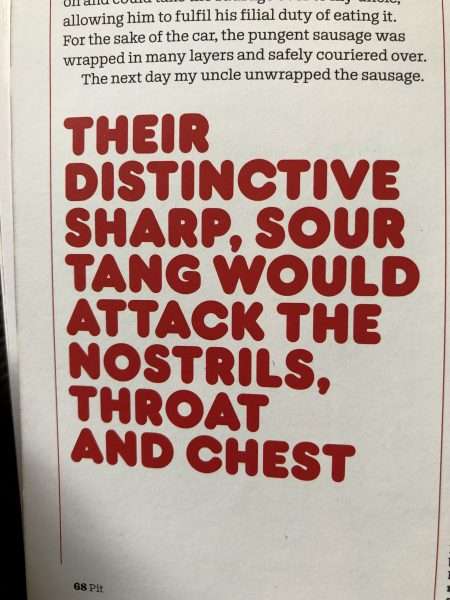 Now, like so many children whose traditional foods were deemed too ‘smelly’ or too ‘strange’ by the ‘host’ country, he’s happily making and eating these now. I remember being fascinated by the lunch items brought in by other kids, but never more so than when they came from a non-English background. My first taste of a samosa was in primary school in Kent from an Indian — I think Indian, it was a long time ago — boy of my own age. I couldn’t believe my luck that he’d happily swap his samosas for my ham sandwich (or whatever else my Mum had put in my box). I’m certainly not claiming a Damascean conversion there and then, to the joys of “others” foods but it was possibly the beginning. Whoever you were — and his name has long disappeared from my brain — I thank you. And most especially, I thank your Mum. 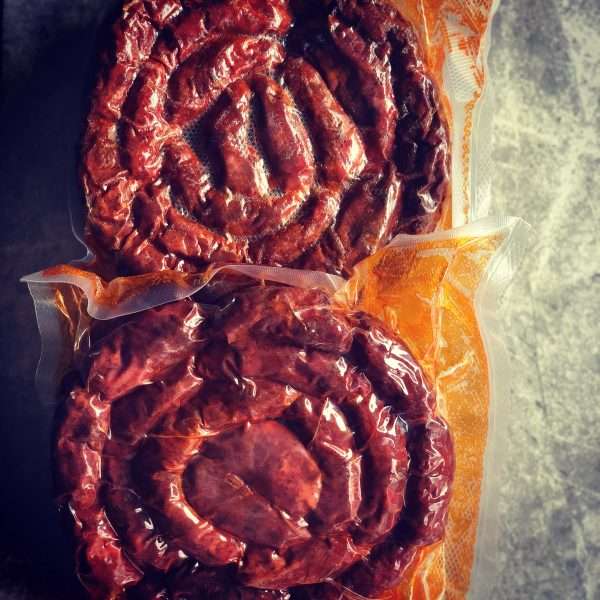 Further thanks go to Jonathan, as I now have a source for these beauties. If you’d also like to try them (and why wouldn’t you?), ping Meldon Ferrao an email at meldonferrao@yahoo.com and he’ll be able to ship. His website is https://www.sososgoanfoods.com/

The lockdown has been terribly tough for lots of people. We, certainly in comparison with some of these poor souls, are hugely privileged. So, one does what one can to help others. Working together, acting together, as a community is the way to survive this crisis and to stop some of the other current shit-shows — Trump, Nazis, climate change — from actually happening. Or, at the very least, help to mitigate their lethal effects.

As well as punching a Nazi a day, you need to (if you can) buy locally; buy non-supermarket. Local is a bit of a moveable feast at the moment, but a lot of the small, one-man band or family run businesses have managed to carry on supplying all the way through. We will continue to use them. Try not to buy from the behemoths such as Tescos & Amazon. Instead, tell them to do one, as in this interesting piece from the BBC Good Food programme, of England in 2030 as  Sitopia – a land with food at its centre. 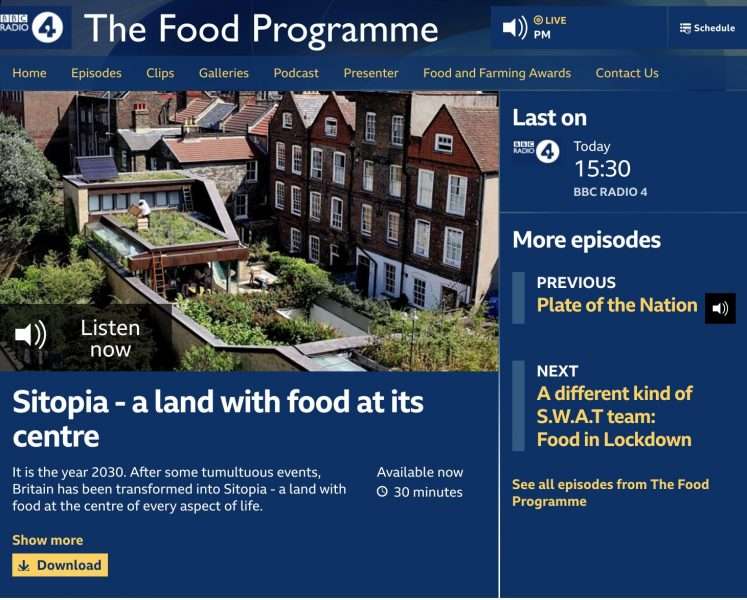 The two links named above in this sub-heading are two of the ones I use regularly. And would highly recommend: friendly, knowledgable, helpful. But there are a fuck ton of others. One great list is available from Niamh Shields (the Eat Like A Girl blogger). Use it. Use them. The stuff they provide is 100% better than the supermarkets. But then, you probably already knew that 🙂

And finally, at least until I get up the energy to write another piece, there are a whole shedload of truly great writers that I follow that you would also benefit from hearing from. Easiest way for me to list them is to point you at my Following section in my Twitter profile. Join up (if you’re not already there) and read them as well.

I’m conscious that this post has been a little random. But that’s where my head is at. I’m not alone there, I’m sure. And I will be doing more writing here; I’m just not committing to exactly when. Much love. Stay safe and well everyone. And WEAR A FUCKING MASK.