It’s all downhill on the subject of swill now…

By Salute The Pig February 13, 2016 June 7, 2016 Pork
Indeed, almost the exact opposite of the Sisyphean task but let’s not waste anymore time…

Puns all done? OK then, on with the show:

BBC Radio 4’s “Farming Today” had a short piece last week (Feb ’16) on a Yorkshire company (a little Googling found them to be called Withernay Ltd, although their website isn’t currently live) working to reduce food waste. Make sure you don’t listen from the beginning of the show though, otherwise you’ll be subjected to some idiots mumbling about homeopathy and how it “miraculously” cures all illnesses in their animals. As bad as the religious bearded sky-pixie types. And as dangerous.

Instead, skip forward to around 4 minutes, 30 seconds into this piece, where you’ll hear Heather Headley describing how they convert surplus baby-food, baby rusks, biscuits and even Belgian chocolate powder into dry feed for pigs & cattle. As the physiognomy of a pig is so close to that of a human, using milk powder designed for say, new-born babies, for new piglets works perfectly. It’s nutritious, safe, full of additional vitamins and trace elements and, importantly (still remember why we’re all here?) STOPS IT BEING WASTED.

Or how about a bit of food-love for the blockchain? Eh? How’s that relevant to food I hear you ask?

It isn’t just for nerds, anarchists, drug smugglers and banksters. A suggestion by a company called Provenance suggests that we could see every single touch-point for e.g. a pig, recorded until it reached you. Any shady dealings would be revealed simply by scrutinising the transaction ledger.

OK, enough of this more esoteric stuff I hear you shout, “what can I as an individual do” (apart from the earlier “boycott the supermarkets” plan, you mean?) and “how can I find out what’s available in my locale and how can I personally help to stop food waste?”
I’m very glad you asked. There are a huge number of resources out there but in some ways almost too many to easily know what works and what’s less effective for you. Some, whilst worthy and no doubt doing a great job – like my earlier paragraphs maybe? — are attempts at policy changing (lobbying, research, working with industry or local & national bodies) or ones such as National Rural, a directory aimed at putting rural organisations on the map and aren’t what you’re after — I can tell (‘cos you’ve got this far) that you’re itching for more information on practical, day-to-day, ideas.

The first place to look for local suppliers and take advantage of a great market-place (with, currently, we’re told, 558 vendors selling some 14,587 products) is The Big Barn, run by a (now) friend, Anthony Davison who, it turned out when I first got in touch, co-incidentally, lives only a few miles away and runs this national operation aiming to become the UK’s No.1 local food website and to help people find good, safe, accountable food from their local sources.

BigBarn is committed to reversing the anti-social trend of the UK food industry. A trend towards the growing mass production of food and control of the market by big business and retailers, giving farmers an average of only 9p in every £1 spent on food in the supermarket. And where milk is cheaper than water in some shops!

And of course, they even have an app — so what are you waiting for? Jump on the site or into the app, plug in your post-code and find some local suppliers and vow to start shopping with them rather than solely at the local supermarket and also support the work that Big Barn do (as a not for-profit) by ordering through their marketplace. 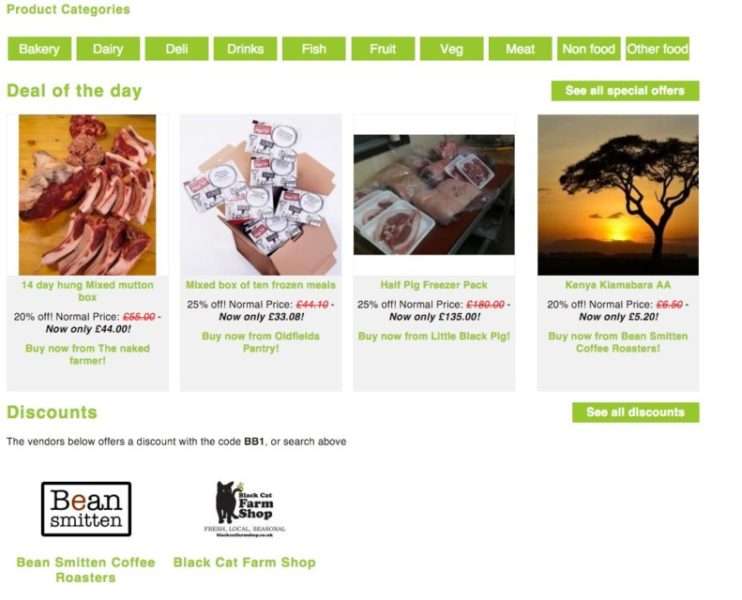 Or how about the good people at FoodCycle? Currently, they’re at 24 locations around the UK (take a look at the image below or visit the site here to find the one closest to you), taking in food donations and then distributing the resultant food to the poor & vulnerable.

We run 24 projects across the country: volunteer-powered community projects serving nutritious meals for people at risk of food poverty and social isolation. Our Hubs are local projects where volunteers are trained up, supported and empowered to collect surplus food and cook it in spare kitchen spaces.

Working with community partners we then provide healthy, communal meals in a warm and welcoming environment to vulnerable people. At our projects we work with groups including: older people, mental health service users, people affected by homelessness, low-income families, asylum seekers and refugees, and people who are long-term unemployed.

A similar approach — but sensibly harnessing the almost nuclear-energy levels of power to be found in the enthusiasm of school-children (if Blue Peter ever decides to invade another country, watch out military types, that’s all I can say) — is taken by Foodshare which aims to connects growers (from schools, allotments, community and kitchen gardeners) with local charities.

Try to ignore the fact that there a number of Royal hanger-on parasites involved, Foodshare are doing a great job. [We can guillotine the Royals later].

Next up is the always watchable and always heart and mind in the right place — even if he is an Eton-educated, posh-boy — Hugh “River Cottage” Fearnley-Whittingstall, who has oft been cited in these pages. His website has a trove of useful tips and tricks.

Hugh also covered the subject of the obscenely high levels of food-waste in a recent 2-parter on BBC (no longer available to view, except by paying more money*, but I’m sure you can find copies on YouTube for example) and joined an illicit midnight raid to see what he could find in supermarkets’ bins (CLUE: a huge amount of edible food, dumped because of stupid regulations stopping them being given away).

*[NOTE: for my US visitors, the BBC is similar to your PBS — a public broadcasting system, funded by a licence fee levied on every household that has a TV, of only around $100 a year]

His subsequent cooking of — and eating, with no ill-effects of course — items that were either well past their notional “sell/use-by” date (and we all know how stupid that concept can be) or were more than a little tired & plain scrappy was a reminder that you don’t have to throw any of this stuff out — be a little creative (or read up on people who can help), re-think how it can be used or cooked.

The programs were subsequently followed by this excellent summary piece, by Jack Monroe, entitled “Don’t Throw That Away! An A-Z of leftovers, tired veg, etc and what to do with them.” he asked her followers for ideas (and also intends keeping this regularly updated, so check back often), with the result that some more than a little unusual items appeared, so there’s even a suggestion on what to do with a half-eaten jar of caviar.

Also local to us is the Feeding the 5,000 & Gleaning team, in turn, a part of the FeedbackGlobal organisation, who you can get involved with, pretty much anywhere in the country where crops are grown, very likely winding up getting dirty, tired & sweaty but knowing you’ve been part of doing A Very Good Thing™.

These people have saved thousands and thousands of pounds of food from rotting in the fields which have then been re-distributed to local food charities. Get in touch, go along, help. 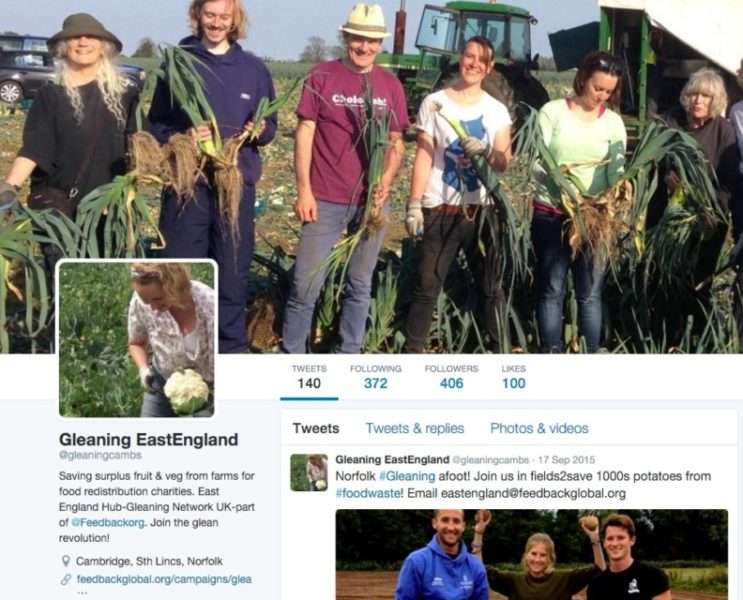 Directly pig and pork related, next is the Pig Pledge group — their slogan, “Farms, not factories” which encourages everyone to buy from high welfare pork producers rather than buying pork from sources (the “factories”) that have no interest in the provenance or care taken for the pigs being 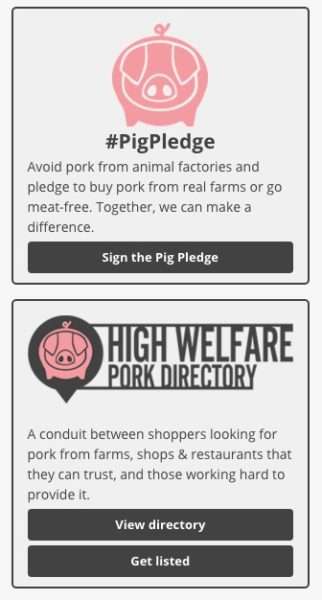 farmed — the afore-mentioned supermarkets being one of the largest guilty parties here.

Get in touch with the Sustainable Food Trust — volunteer, get the word out, donate time or money (or both) to their work.

I mentioned them last time, but the enthusiastic people at OLIO don’t get paid for what they do in the work they undertake to get food items that would otherwise get thrown out shared with people in your immediate locality. So, help them organically grow this network, sign up via the app and start sharing…

Lastly — and yes, this is one of those ones I mentioned at the beginning that doesn’t really help you but still —  a shout-out to the team at The Campaign for Real Farming who say that’s shorthand for “Enlightened Agriculture”; informally, but rather, in my view, poetically defined as

“Farming that is expressly designed to provide everyone, everywhere with food of the highest quality, forever, without wrecking the rest of the world”.

That’s it for today anyway on the benefits of swill and the many and manifold evils of food waste — but the latter is a huge, global problem that isn’t going away any time soon, so I’ll no doubt re-visit it at some point to remind everyone.

Before I forget — and anyone who knows me, knows that this is an increasing hazard — one last shout-out to our US friend Philip Philipps, now living with his partner the equally fantastic Dennis in Mexico, who sent me a link to a heavy-duty academic piece on, <deep breath>, “What the Pig Ate: Analysis of Pig Husbandry Intensification in Northern Mesopotamia through Plant Microfossils Trapped in Dental Calculus” by Max Price and Sadie Weber. If I’m honest, I haven’t digested it all but it’s a fascinating write-up on ancient diets and the effects of this on the husbanded pigs that lived alongside the humans.

OK, this has been a long piece but to round up, here’s my “one last thing” for today, a quick glimpse at a stunning piece of woodblock work – a 5′ high pig delight by the obviously talented Sue Medaris, who came to my attention thanks to the even more talented Val Littlewood [OK Val, you can take your foot off my throat now, thanks]… 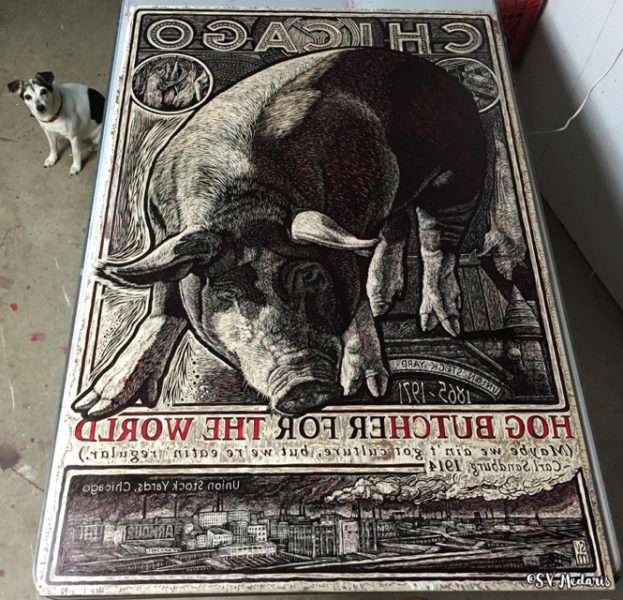