The Spanish word “matar”, means ‘to kill’; the related word ‘matanza’ however refers to much more than just a simple death; it’s the name for the whole process that, extending over two or three days, starts with the actual slaughtering — involving almost the entire village or local community — and winds up with the whole “nose to tail” pig having all been used — right down to the gelatine from the boiled trotters — whilst along the way producing the cuts, sausages and charcuteries. 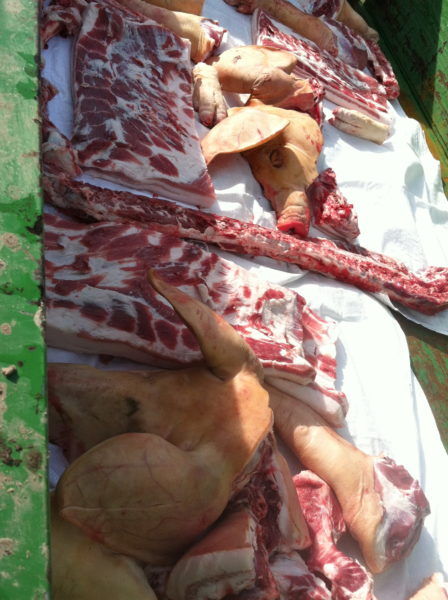 The matanza was always an intimate community affair and is still such a core part of the culture. The end result after all provided food for them for their entire year, so was central to the very continuity of the people. Here, in tiny villages, often composed of less than a couple of hundred residents, self-sufficiency is not some hipster alternative dream; rather it’s the default way of life. Men in archetypal flat caps (although the odd branded football team cap now makes an appearance) & the ubiquitous blue overalls still use mules in ploughing, wood is taken from the still surrounding forest to heat homes in (the surprisingly cold) winters. And the majority of the inhabitants retain a smallholding, growing organic produce and rearing the traditional animals for their meat and produce, all year round.

The way this process works shows a deep understanding of a quite complex ecology which brings a much more intimate engagement with the environment than that in some other countries where mechanisation and automation has broken this direct link. Here a sustainable past — which has already lasted thousands of years — shows that a similarly sustainable future is possible.

They’ll bring the pig from its home close by, as slowly and quietly as possible and then lay him on a wooden table in a farmyard, all the while soothing, stroking, calming him. No stress is good; it means no adrenalin pumping into the muscle and souring the meat. Then a man (it’s work almost invariably still done by a man) wields a sharp knife and quickly and simply slices through the carotid artery and the pig starts to bleed out. Then the women rush forward with buckets for the blood. The whole process takes less than 15 seconds.

Making good use of this bucket of hot, steaming blood is, by contrast, the work for the women in the village, who’ll stir it vigorously to keep it from coagulating, until the blood can be mixed with rice, oats and herbs & spices to make that delicious morcilla.

This shot below, of the women chopping herbs ready to be used for the morcilla, is hugely reminiscent of all of the similar community village activities we saw in Casarabonela when we lived there… 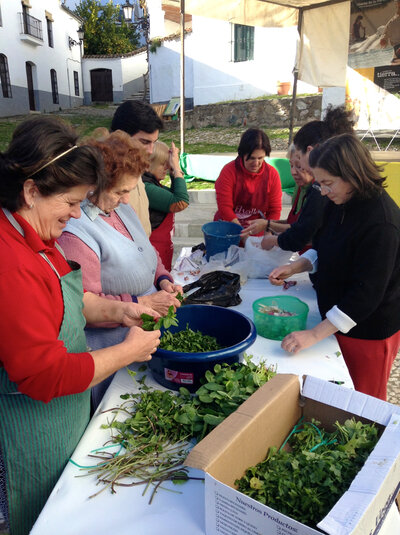 …or this one, with the women washing the pig’s intestines in a cold stream, with lemon and vinegar to later be used as casings for the sausages. 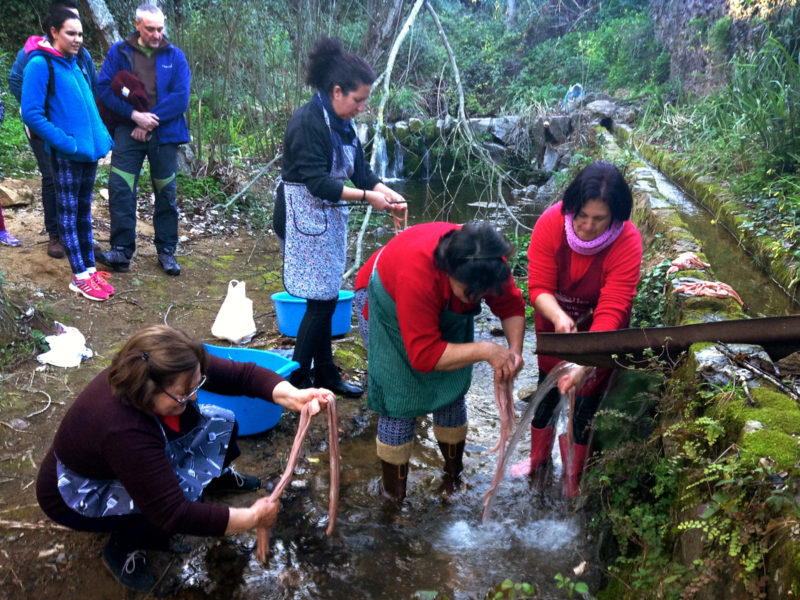 It’s not a scaleable model, one that can be replicated across the world; everyone knows that. But it’s still a tradition that should be retained. This death is not something to be hidden away in a futile attempt to pretend that animals don’t die whilst producing the food that we all (most of us) consume in such huge quantities.