Lipstick on a pig?

Why not? They’re good with mirrors after all. But a Sarah Palin or David Cameron nightmare to haunt your dreams this isn’t, don’t worry. 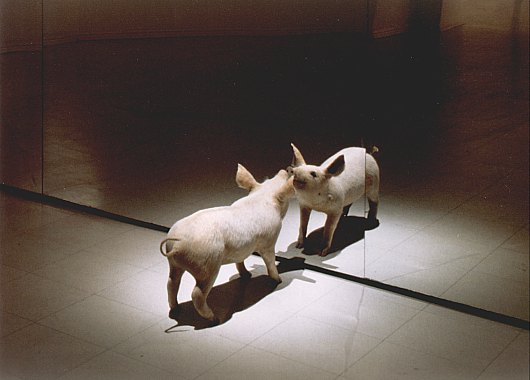 Scientists see the ability to understand how to use a mirror as a sign of complex cognitive processing and an indication of a certain level of self-awareness (in this case, called assessment awareness). Into this select band of creatures able to perform this feat, come the pigs; in addition to humans and some of the other primates, dolphins, elephants, magpies and (notably) a famous African grey parrot named Alex

Research by Donald Broom of the University of Cambridge, back in 2009, was published in Animal Behaviour and shows a level of self-awareness that means they can understand the significance of a situation in relation to themselves, over a short period of time. In this case, the pigs remembered how their own movements appeared in the mirror and further, were then able to apply that knowledge to a separate situation involving a hidden bowl of food. 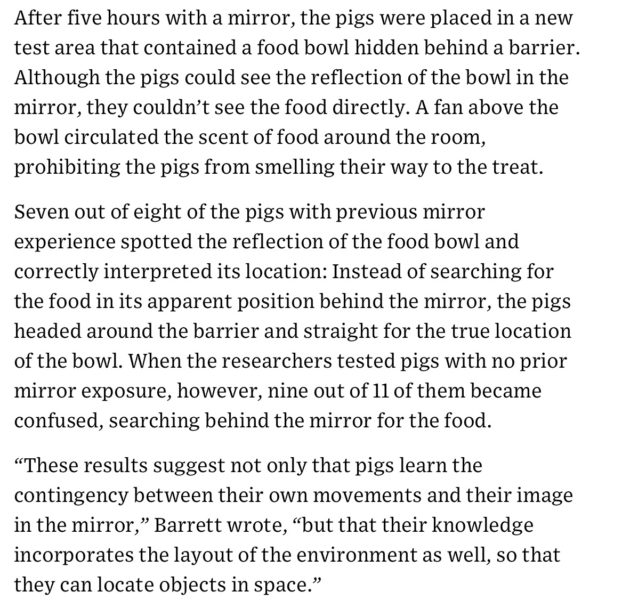 Interestingly, if researchers placed a yellow mark on the black feathers of a magpie, it then used the mirror to clean itself off. These ‘mark’ experiments just don’t work on pigs: they’re so accustomed to being streaked with mud, they really don’t much care if more “dirt” appears on their body

“We have put marks on pigs,” Broom wrote. “They take little notice of them.”

Smart eh? You have to love pigs. Here they are, managing to give the finger (trotter?) to Big Brother in the shape of their farmer. The same RFID chip technology used to track pets is also used for farm animals – to trace livestock through their life-cycle. The microchip implants securely identify the animal’s origin so there’s full traceability i.e. in the event of an outbreak of a disease, such as mad cow, the RFID-tracking system will pin-point the source farm.

The video below is of pigs on a farm in Essex where they’re equipped with cumbersome RFID collars that attempt to limit their food to a certain amount per diem. A pig walks through the gate and their collar works out how much (if any) food to dispense. But in a classic case of learned behaviour, some of the pigs have figured out this collar is the key to more food. And this adaption to their environment is happening on a number of independent farms not just this one. Some pigs manage, by dint of scratching, to remove these collars and other pigs come along, pick up the discard and…carry it to the feed gate a second time. Voila! Double-helpings.

And one last thing? Pure poetry in motion. This video of the boys at Blenheim Forge using their furnace and other kit. I really want one of these…