… thus cementing its status as a 90s London icon. I ate there once. And it was OK. But for some reason, really quite unmemorable. I have no recollection at all of what I ate. And I don’t think that’s down to the amount of expensive alcohol I’d have consumed.

But since then, to be honest, if anyone had asked, I’d have hazarded a guess that it’d closed down years ago. As it turns out, it hadn’t. It was bought some years back by the D&D Group (involved with Conran I think). It looks, if recent photos are anything to go by, even more louche and seedy than before. But putting down this temple to 80s/90s bankster & hot money oligarch excess isn’t the point of this piece. No, it’s talked about here to highlight their recent decision to work with the Evening Standard and that newspaper’ campaign, “Food For London”. Quag’s have already given £50K to this project and are planning on adding an (optional) £2 to all the bills going though the restaurant in November & December potentially raising a few more tens of thousands (not hard I know, I mean it’s not a cheap place to eat).

And whilst I could be horribly mean about this, I’m not going to be. Whilst of course, it is good publicity for them and the newspaper this speaks to the whole important discussion about food waste and the debate about the wider Tory “austerity” initiatives that are a national disgrace.

It chimes with a lot of the other initiatives that I’ve written about on here before. And as the paper rightly says in this editorial: “it is morally unacceptable that people are going hungry in a wealthy capital — let’s change that”. So, let’s help to support this. Or other initiatives more local to you (not all of us live in The Smoke). Or if you can afford it, give to both. 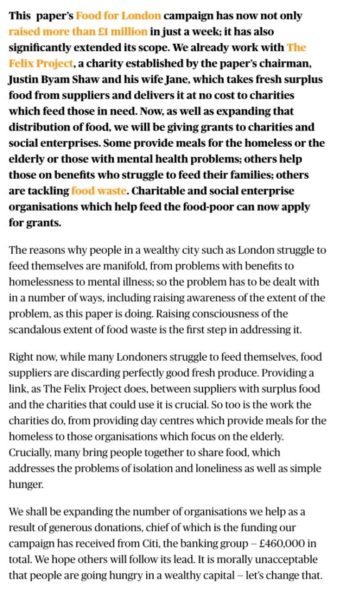