More on The Pig Idea

In times BC i.e. pre-March 2020, I was still writing a separate blog about what steps were needed to get to Zero Waste. That’s kind of withered on the vine somewhat during the past year but this piece is one I started for STP a few months back and needs bumping out now, if only so I don’t stop the writing habit altogether!

Some idea of the amazingly obscene levels of waste within the food chain is highlighted by the detail that over 115 million litres of pig blood are produced each year in the US alone. Most of it is turned into blood meal and used to feed young piglets but when meat’s on the menu (it still is of course; where/when/how this will change, is a subject that deserves a whole set of separate posts), it would be sensible to re-purpose this and instead offer alternative uses such as blood sausage; before thinking that feeding pigs to other pigs is a good thing. We all know how feeding animals bits of other animals worked out for us in the UK…

In 2019, 35% of all food in the United States went unsold or uneaten. The good news is that the total amount of this surplus food has leveled off since 2016 after increasing by 11.9% in the earlier part of the last decade – and surplus food per capita actually declined by 2% during the same period. A deeper look at the data also found that:

There is something that the average person can do to slow down climate change, and it can be accomplished without leaving the house. Don’t waste food. From a report: Some 931 million tons of it went to waste in 2019, according to the United Nations Environment Programme. Individual households were responsible for more than half of that, with the rest coming from retailers and the food service industry. New estimates show that about 17% of food available to consumers worldwide that year ended up being wasted. The matter is even more urgent when considered alongside another UN analysis that tracks the problem further up the supply chain, and shows 14% of food production is lost before it reaches stores. Waste is happening at every point, from the field to the dinner table. Food waste and loss are responsible for as much as 10% of global emissions, according to the Intergovernmental Panel on Climate Change. If it were a country, this discard would rank third in the ranking of the world’s sources of greenhouse gases, after China and the U.S. Among the most effective climate solutions, non-profit Project Drawdown ranks cutting food waste ahead of moving to electric cars and switching to plant-based diets. Thursday’s UNEP report suggests the amount of food wasted by consumers could be about double the previous estimate. The analysis conducted by the UN’s Food and Agriculture Organization in 2011 relied on data from fewer countries.

For some years now, the Japanese have been exploring the re-purposing of surplus food taken from from retail operations and caterers to feed pigs after first being treated and they trumpet the benefits of their pork fed on surplus food, as “eco-pork”.

In 2018 there were 360 eco-feed producers operating. 47 of them processed surplus food from retailers and 29 specialised in the processing of meat-containing surplus food.

The Odakyu Group is a great example of this virtuous circular operation. They run a chain of department stores, rail transport, hotels and restaurants, all of who deliver their unused food to the Japan Food Ecology Centre (JFEC) factory to be turned into pig feed, and they then go on to buy back the pork raised from this feed, to sell as a premium-quality eco-product in these same stores under brand names such as Yuton, meaning “superior pork,” and Umakabuta, “delicious, flavourful pork.”

JFEC takes in 35 tonnes of surplus food per day to produce 40 tonnes of this eco-feed which is then separated into carbs, fish, vegetables, etc. before going to be heat treated (they only need temperatures of around 80-90 degrees for a few minutes) and then into a lactic acid fermentation process which inactivates any disease pathogens (mainly targeting E. coli and salmonella). They also add various additional nutrients such as calcium lactate and lysine, a kind of amino acid, to make this, as they see it, “a premium feed for premium pigs.” About 24 hours after the waste first arrives, the liquid food is ready for the farms. 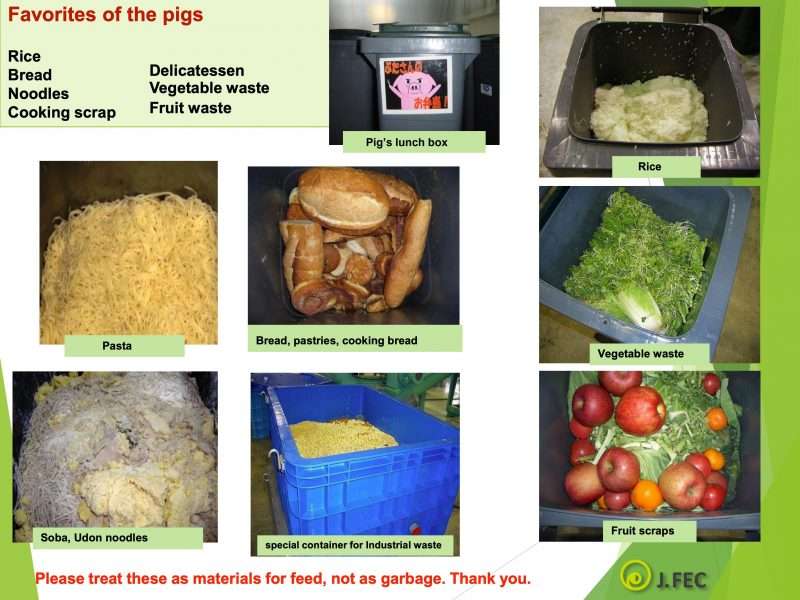 Most of the waste is carbohydrates, such as bread, noodles and rice, which is actually better for pigs’ health than it might seem as, just like us human, 70% of the energy pigs require comes from carbohydrates & it’s sufficient to get just 10% from vegetables. Carbohydrates are an important component of quality feed, and bread-and noodle-based waste actually trades at cheaper rates than vegetable-based ones and ultimately costs the farmer less than half the price of dry feed.

It’s a well monitored and safe process and it’s one that’s well overdue for approval here in Blighty.