She wasn’t a great cook or chef; she didn’t aspire to be. As the wife of a working pig-farmer and a mother to five children, she would have laughed at the very idea. Had she had the time. No, she was ‘merely’ a good cook. One making nourishing, appetising food from (often) limited and cheapest cut ingredients, on a small budget. And making three full meals a day, seven days a week, 52 weeks of the year for all seven of us. For that, she (along with all the other mums who’ve been doing this for their families for last few 10s of thousands of years) is my food hero. 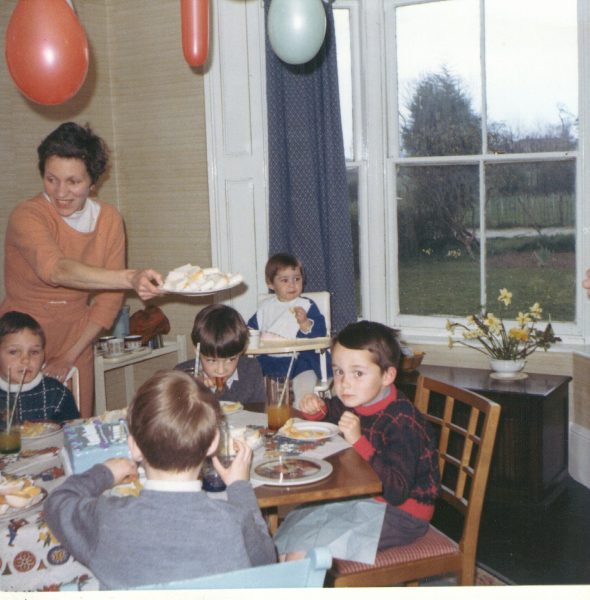 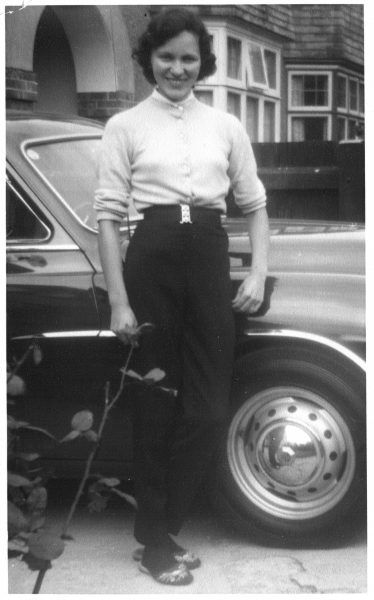 [Note that handsome, cool kid at the head of the table, in the red & grey sweater? That’s me that is. And the gorgeous lady in the photo standing in front of that rather shiny car, is Mum, of course]

We’d all watch those early TV food shows: first Fanny Craddock (with her Johnny) then Graham Kerr (the ‘Galloping Gourmet‘, a childhood hero of both Emeril and Charlie Trotter) and of course, the inimitable, never bettered, the one and only, Mr Keith Floyd. Even at a young age, I knew this man was different, unique, probably deranged and definitely dangerous. He was a later food hero of mine. Still is for that matter. But none of them cooked like my Mum did. 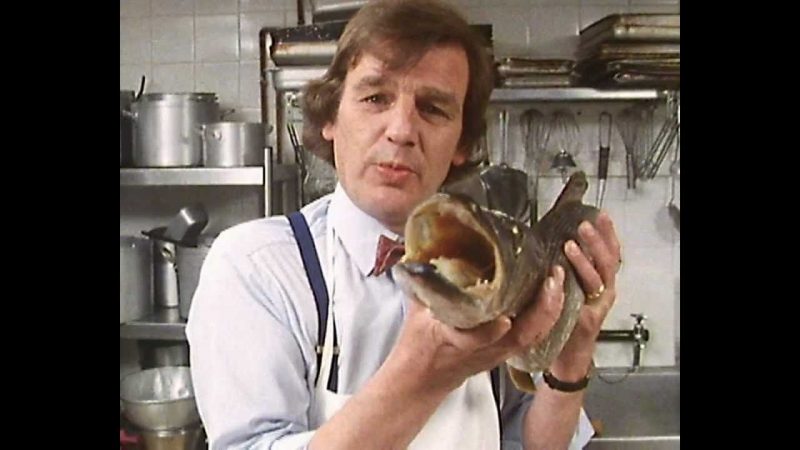 “Cooking is an art and patience a virtue… Careful shopping, fresh ingredients and an unhurried approach are nearly all you need. There is one more thing – love. Love for food and love for those you invite to your table. … Plates or pictures of sunshine taste of happiness and love.” From his 1989 book: A Feast of Floyd

Shopping for all this food needed for her growing horde, was also a military-style operation; getting us together, suited & booted and then kept together, either on the bus into the nearest town or village, or, more frequently, walking along the road-side. My Mum remained — right up until the last few years of her a life — a prodigiously speedy walker.  We all learnt, from a very early age, to keep up or get left behind. For her, the shopping must have been worse than herding cats — at least they after all can be put in a sack to move them around, an approach even then frowned upon by the authorities and disapproving neighbours, as an unsuitable method for controlling errant children.

We’d eat lots of the vegetables and fruits from our garden — Mum & Dad being both keen gardeners as well as being keenly aware of the savings to be made by growing your own produce. But there were still other items that needed this visit to the local grocer, butcher and fishmonger. Dark & mysterious often were these places. Fun as well, with intriguing smells and odours. The bloody sawdust in the butchers, the fish, smelling of the sea and salt and water strewn across ice, the vegetables mixing their smells in the greengrocers shop. I don’t recall a ‘weekly’ shop until I was much older — and that probably coincided with the arrival of the first small supermarket(s) into the village or town — I’m pretty sure these shopping expeditions happened almost daily.

For my Mum, the advent of this one-stop shopping (along with the arrival of the washing machine and spin-dryer) must have been a huge relief. It finally gave her some time to herself, time that up until now had been dedicated to the children and then, when they finally went off to school, to housework and shopping and cooking. Even now, I don’t know if she actually enjoyed all the preparation and cooking; I suspect not. I suspect it was a part of what she had to do, rather than a joy. But that’s OK. What she produced, we all loved. My daughter still talks fondly of and with longing for, my Mum’s scrambled eggs. Incomparable and never matched as far as she’s concerned. And she’s right of course 🙂

Later Bar (short for Barbara) ‘graduated’ to using more of the convenience items that came onto the market in the 60s and 70s. I well remember us all sitting down to eat as we’d just moved into a new house. It was late; we’d been packing and moving and un-packing pretty much since dawn. We moved house a lot as Dad’s work took him to various pig farms around the English countryside. The moves were planned with as much attention to detail as the Normandy landings; even us kids became quite adept at coaxing a recalcitrant bed up and around a sharp bend in the staircase. So, of course, we were all hungry. That was our default state I think, like all children.

Mum & Dad had put together a scratch meal of, I think, something like sausages, carrots & cabbage but they hadn’t had a chance to shop at the local village grocers, so dug out from the depths of the cupboard, some Smash potato powder. Note: do not do as Mum did and add too much water. Or you wind up with potato soup. None of us laughed at the resulting puddle on our plate and we all dutifully ate it. One look at Dad’s face and we knew that we were in deep, deep shit if we didn’t smile and gobble it all down. So we did. But despite our apparent delight in the dish, I don’t think we ever saw a Smash packet again.

And, to be fair to Mum — looking at the ingredients — it would have worked and turned out a serviceable facsimile of mashed potatoes. Just too much water…

For those of you UK readers of the right age, this will evoke memories — “and then they smash them all to bits“…

I was thinking this morning of the very distinctive smell of the cabbage water remaining after it was steamed or (in my Mum’s case) usually boiled in a saucepan. It was never wasted. Poured back into the pan to deglaze it (and again, I doubt that Mum would have used that word) or as part of the base for the browning sauce. So what’s that I hear you ask? It’s a blend of caramel colour, vegetable concentrates and seasonings. It’s been around since the early 1900s and is used to add a rich dark colour to foods. Traditionally added to both gravies and sauces — like the home-made stocks on which it’s based — it also works well in soups and stews, to darken the broth. 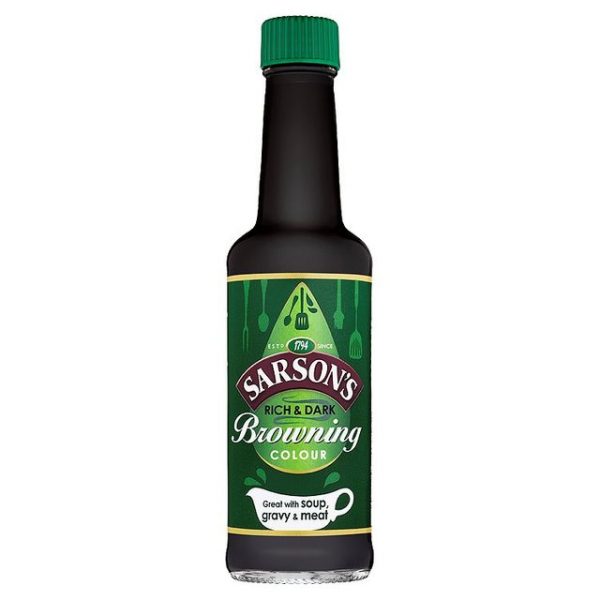 It’s good stuff. I’m not so sure about gravy granules though. This was — in my view although a view I probably didn’t share with Mum — one step too far down the “convenience” road. The content ideas are OK as you can see… 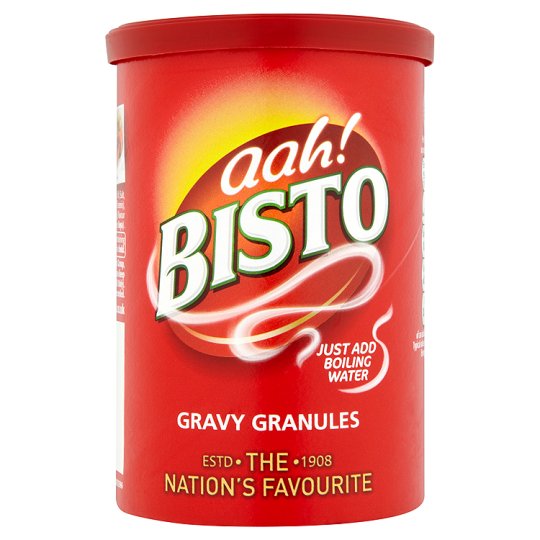 …and as the name implies, they were freeze dried packets or tins of granules that you’d use to thicken gravies. It’s still being sold. And I know it saves a little time. But pan gravy isn’t meant to have granules in it. That’s just wrong! Sorry Mum. That said, the use of Bisto and the unfortunate potato soup aside, you never put a culinary foot wrong.

Thank you for the food, the gravy, for everything. I miss you.