Osasuna eta On Egin and the Euskal Txerria

Nola jan jakitea, nahikoa jakitea da; “To know how to eat, is to know enough.”

I’ve covered the rare & endangered breeds of Great Britain and heritage US ones also under similar threat plus one (le Noir de Bigorre from France) from mainland Europe, so — feeling the need to add to the latter’s tally — for this piece I’ll be discussing the Basque country’s own autochthonous “Euskal Txerria” also known as “Kintoa” (or “Pie Noir du Pays Basque” in French) or “Xuri eta beltza” (“black and white” in Basque).

Their Kintoa name comes from quinta, an old tax. Pigs were traditionally brought to the “glandée” — pastures of acorns and chestnuts — in autumn by the peasants who were, of course, obliged to pay “royalties” to have the right to take the pigs onto communal land.

“The Kings of Navarre levied on the pigs that grazed the “mountains of the king” a special contribution called “quinta”[or fifth],  for at the beginning it consisted in taking one pig out of five; This imposition also bore a Basque name: yurdea, irurdea, or ehiurdea.” (Pig farming in Lower Navarre in the sixteenth century. E. Goyenetche. 1965)

All across Europe right up until the middle/latter part of the last century, for hundreds of years, pigs had been bred to be used in the same manner. It was no different in Spain; every farmer in the Basque Country would have kept a small number of pigs which would be taken — as what were known as lechones, 2 or 3 month old just-weaned piglets — to local fairs, there to be sold to buyers from all corners of Spain. One or two animals would have been kept back for fattening; there to be fed on kitchen and vegetable garden leftovers and the food they’d graze from the woods and hillsides. 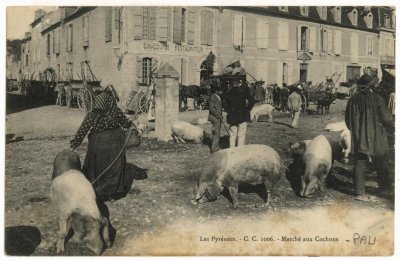 There had been three indigenous breeds of pig recorded living in the Basque Country right up until the early ’70s, when the last known individuals of both the Baztanesa and Chato Vitoriano breeds disappeared. The decline of the latter, in particular, occurred with spectacular speed: in 1952 there were around 157,000 sows; by 1974 it was considered extinct. The only survivor of the old Basque pig trio was the Euskal Txerria. Pink, with black patches on their head and hindquarters and recognisable by their enormous, floppy ears that fall over their eyes, even reaching their snouts, these pigs grow to around 300 lbs (or 140 kilos) at slaughter time.

They also had come close to meeting the same end as their cousins. In 1929 a census recorded 159,000 head but by 1989, only 25 remained, most in the Aldudes Valley in Lower Navarre, in the French Basque Country, with a few others scattered in Biscay, Gipuzkoa, Navarre and Huesca. Like so many breeds that take time — and thus cost the farmer more — to come to maturity and may only produce small litters (in the case of the Kintoa, sometimes only 2 piglets a year per sow), they were side-lined in favour of bigger, faster growing, more resource efficient competitors.

That they have survived is — like so many breeds — down pretty much to just one man’s efforts; in this case due to the initiative of a French Basque farmer, Pierre Oteitza who’d kept breeding the animals. By 1996 there were again a reasonably sustainable number of sows, but none of animals were left in Spain’s Basque Country. Pello Urdapilleta (whose last name means “herd of pigs”) and his family brought some south of the Pyrenees and began to farm them on their 133 acre property, Elola, which has been in the same family since at least 1550 (!), helped by Mariano Gómez, a veterinarian interested in local breeds, who was then also involved in preparing traditional local sausages. 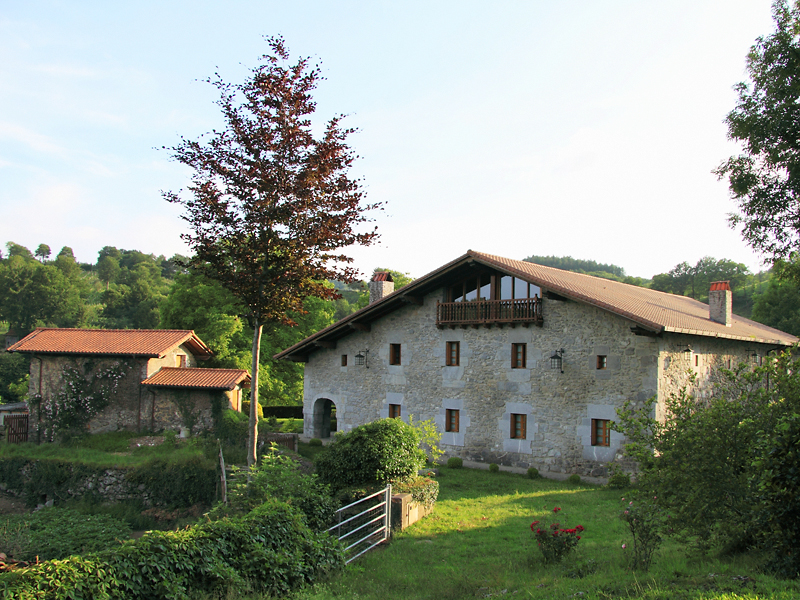 Farmed in the traditional way, left to root and rummage, density doesn’t exceed more than 14 animals per hectare. The pigs live on steep hillsides and in the forests where they graze freely on acorns, chestnuts, hazelnuts and grasses. They only reach a proper fattening stage after 24 months and in the last two months they’re fed on corn, beans and bran (no GM feed is used) until they reach their killing weight. Today there are close to 400 sows and 70 boars in this area; about 2,000 are slaughtered annually and the meat is prized both for use in the traditional charcuterie produced at the farm…

…as well as being used more and more in the restaurants in the area. They’re very close to San Sebastian, a town with more Michelin starred chefs per square foot than anywhere else in the world (apart from Kyoto). Need I say more?

Thanks to these efforts, a breed once classified in 1981 as “endangered” by the Ministry of Agriculture, the Basque pork kintoa this year (2016), on 17 July, gained recognition under the Appellation d’origine contrôlée (AOC) label.

“The fruit of collective works over thirty years, “says Christian Aguerre, kintoa breeder in Itxassou. “But this is only a step towards the Protected Designation of Origin (AOP) which will protect us at a European level”, he whispers…

And Osasuna eta On Egin? It translates as “to your health” and is the Basque equivalent of “bon appétit”.