Give them shelter from the weather but let them out to roam across the fields & pastures.

That’s how pigs were always treated until the comparatively recent advent of factory farming and a lot of people are currently now, and rightly, trying to reverse this decline.

The pig farms I knew and lived on as a boy* were already showing signs of becoming the precursors to these huge, profit driven, stark “meat production” units now common. Huge covered stalls, pigs crammed inside all day & night, no room to move, to play, to explore, antibiotics used like Smarties.

There isn’t as far as I know, an equivalent word for pigs, to “inhumane” used for the two legged people. There should be.

*[As a side-note, I well remember on one farm, a huge barrel of black, molasses-like treacle, used as a treat for the pigs — it was also a treat for any children who managed to dip their fists into it whilst running past, trying not to let the farmer (and my father who was one of them) see your act of thievery.]

It was understandable why most farmers chose to take this approach, as both pricing, being driven by huge buying units, such as the supermarkets, pushing down prices to a rock-bottom and “taste” (driven by ill-conceived government edict & ill-informed “medical” advice) were changing the economics of farming, in a way that hadn’t been seen in any of the previous hundreds of years leading up to the last century and, counter-intuitively,  was one of the reasons why Danish bacon managed to get such a strangle-hold on the English market and shopping basket.

If you want bland, tasteless, watery, lean pork (lean pork; whoever thought this was a good thing?), supplied through a supermarket counter, then this is where your meat still comes from — but if, like us, you want good meat, flavoursome, different, interesting meat, from people who care passionately about their animals, then buy from the increasingly common small, far less intensive, rare breed suppliers.

[And before I get torrents of abuse from UK farmers: Yes, I know that pig living conditions have been improved slightly recently – although it took legislation to force you to make this happen – and that European farmers are now worse villains in the piece, as they’re failing to implement the relevant directives. But it’s still hugely far from the ideal.]

On a brighter note, the recent visit to Sylvia & John at Old Weston Garden Farm where Old Spots (and Berkshires) were running outside, prompted some great art-work by Val and a page on the history of this breed by me. 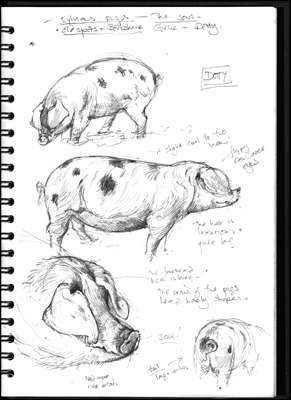 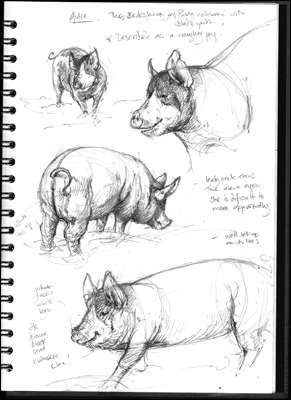