Nope, not the The Hobbit. That’s just being silly. @Val_Littlewood and I agreed during the course of this latest trip to two of the most important cities of the Basque Country that we’re really just not cut out for the excessive formality, the often almost stifling stuffiness, the enforced quietude and the apparent forelock tugging reverence demanded — of the customer — of visits to the very top end (often Michelin) star(-red) restaurants. 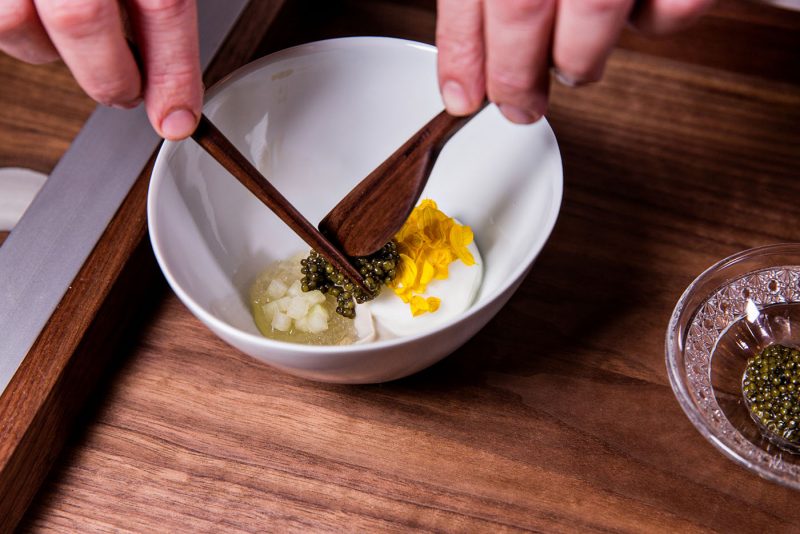 Almost as bad as the — thanks to Val for coining this one — militant terroir-ists! Instead, we’re at our very happiest when we’re allowed (no, required) to drop our used paper napkins on the floor, where we can excitedly grab another pintxos from the fantastic array on the counter & cram it into our mouths, adding to the pile of tooth-picks stacked on our plates, shout — in our very poor Spanish — at the owners and fellow customers (in a sometimes vain attempt esp. on my part, I freely admit), to communicate effectively and generally have a bloody great time.

I know that this confession means I’m barred for life from the Gourmet Club. I’m unrepentant. If we’re not enjoying the whole experience — not just the food — then there’s no point going and paying their eye-wateringly high prices to spend hours that could have been better utilised elsewhere. Sorry. Put it down to our inability to grasp or identify those subtle tastes & textures, painstakingly teased out of the meticulously sourced, hyper-local, rare, historically priceless, artisanal ingredients that they’re providing for our delectation.

And yet still, despite this (completely co-incidentally timed) article wherein Sean Brock passionately defends the tasting menu — from which the above shot came — you’ll just have to call us Philistines, as it’s all just too difficult for us. Or so it would seem.

Anyway, if you haven’t yet totally recoiled in disgust from this confession of my abject failure but instead, are still sticking with me here, as a loyal reader, then “read on (not “lay on”, I know!) MacDuff” for this and subsequent pieces on where we DID go and what we enjoyed.

The Basquery was one such delight. We stumbled inside the dim entrance at the end of a long day of pounding the streets after a frenzy of exploration. Setup by an Aitor Elizegi, local chef and businessman, it’s a combined brewery — run by the team of Mikel Muñoz and Pablo Mellado (known as the “Drunken Bros” — I’m not sure if that is intended as a compliment or just as a comment on their usual state) — a bakery (both types of fermented goods being produced in-house) and…

…a deli/grocery area, all situated slap-bang, right in the centre of Bilbao and next door to his restaurant, Bascook, which we had no idea even existed until after we’d left, but will now be visiting the next time we’re in town.

On this, the first of two times we came here, we started with their taster flight of beers. The “Hitman” IPA is fantastic, using the Citra hop; if you get a chance, grab a larger glass or two of that. The “Bagazo” stout is a rich, chocolate deep taste and, especially in winter, something to warm the cockles of your heart. The “Mile O”, subtle, light, quite sweet whilst the “Eskombro” reminds me of the great brown ales that you used to get in England 50 years ago.

It’s all housed over two floors (taking up the ground and basement areas) of a fabulous old corner space, with great swathes of the old brickwork and building stone and ironwork — from its time as a harbour side warehouse — kept delightfully intact. I know this look, as used everywhere from Hoxton to Hamburg to Hoboken, can be more than a little clichéd now, but here in Bilbao, that most industrial of cities, with a long, long tradition of iron making and ship building, it makes perfect sense and reflects their proud Socialist past. 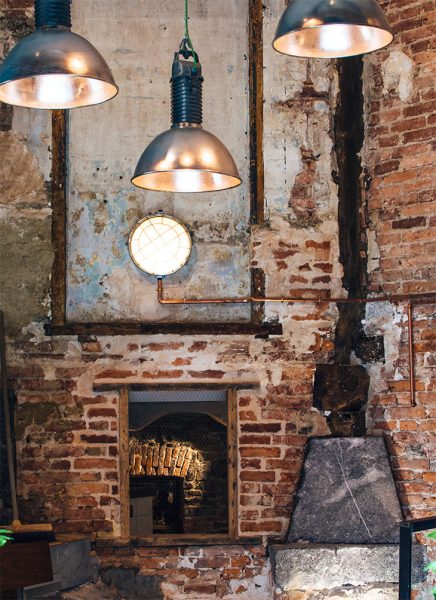 I discovered — but, unusually for me, didn’t attempt to broach — this bottle, housed in a whitewashed alcove in los baños which (not so strangely when you think about it I suppose, same country and all) looks remarkably like the inside of our old house in Casarabonela:

The bread machine used in their bakery is the junior version of this, one we’d earlier seen in the old town 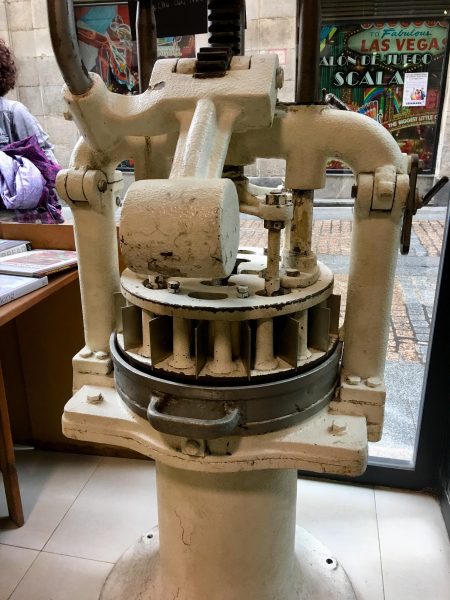 The place was almost 100% full but we managed to squeeze onto seats at a small, wall-side high table; grabbing the menu which was full of promise…. …and it delivered. In the way that I talked about above, that was fun, sometimes frenzied, not stuffy.

Arrayed on the table in front of us in the shot below was, at the top, a dish of the Navarra Leeks with Pico de Gallo. In the middle, 4 gorgeous pieces of Euska Txerria charcuterie, chorizo, cold-cut loin, thinly sliced sausage and cured ham and on the bottom plate is chunks of their home made bread, still hot from the oven and slathered in tomatoes.

And a nice touch is their own bottle of water. Bilbao tap water. Simple, cold. No charge. Just there on the table. 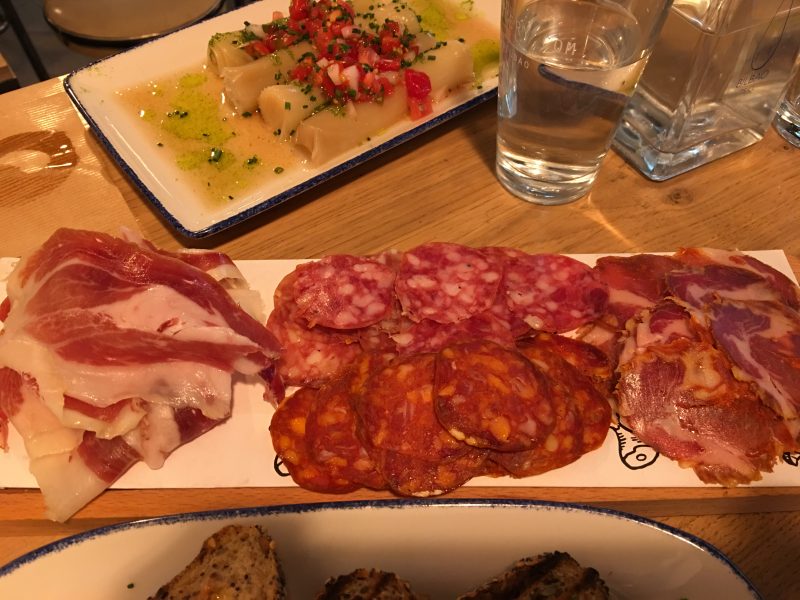 Andrés the fluent English speaking, front of house star, told us that their charcuterie and meats are supplied by the team at Ein Prosit, a German restaurant and beer keller, only – literally – 5 minutes walk away from Basquery. It’s fantastic stuff. Look at the way the fat is melting on the plate at room temperature?

And finally? This great shop-front, La feria del jamon, that we saw on the way back to the hotel that night. Sums up what I’ve been saying here, don’t you think? Ham. On tap! Anytime of the day or night! 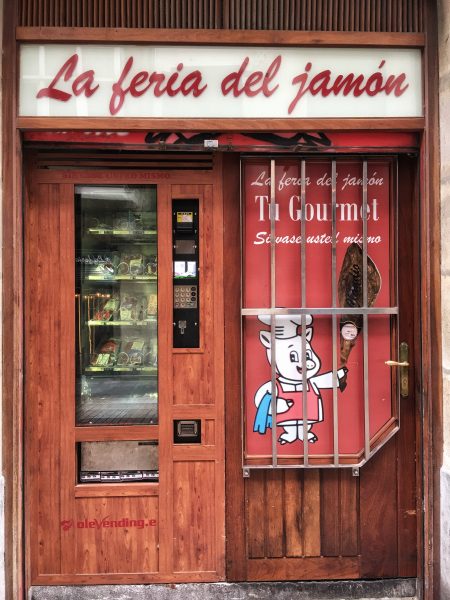