A hugely exciting trip to Amsterdam last month; far too short of course as they always are, but starting here for the next few weeks, for your delectation and delight, are some selected, important highlights.

If, like me, your Dutch leaves more than a little to be desired, my apologies then that a lot of the links will be in Dutch (although equally, a lot won’t be or will be bi-lingual, as the Netherland natives uniformly speak fluent, colloquial English).

This post is going to concentrate on a sausage company Brandt & Levie. But they’re much more than a simple “sausage company”, good though that concept alone may be. Hell, who doesn’t like good sausages (well, my vegetarian daughter aside)?

So why them you ask? Why are they important?

The simple answer? They do things RIGHT. Not the easy way, the cheapest way or the most profitable way. But the ethically and morally, right way.

Founded in 2011 by three friends, Geert van Wersch, Jiri Brandt and Samuel Levie (a Brit but born there), who’d met working in various roles in catering. The company is now based in the Westerpark area of the city, but they started off in a small basement, in a little town called Baambrugge

[A trivia note for music lovers – the Beach Boys recorded their album “Holland” in Baambrugge, using a reconstructed studio sent from home].

They’d taken to time to go off and work with Dario Cecchini (you’ll recall I earlier raved about him here) and they came back determined that his philosophy would be engrained in the company DNA from the start. Respect for the animal. A quiet (well, in his case, maybe not so much) pride in and passion for the noble and ancient profession of butchery. And then more months practicing, experimenting, tasting, discarding before they started up. 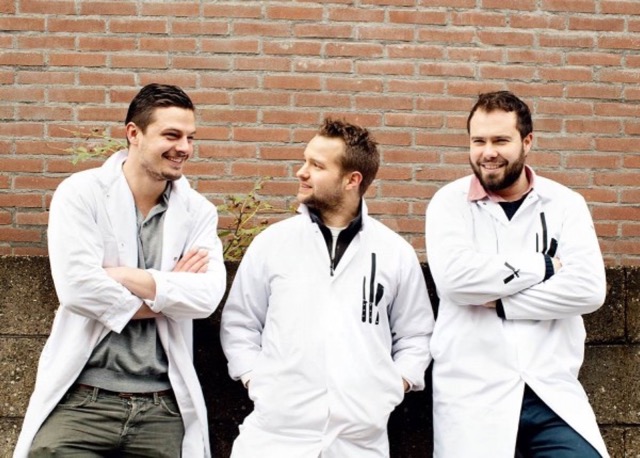 But the wait was worth it. Their “worst is the best”. Sorry, their pun, not mine. But it is great meat and great meat products. 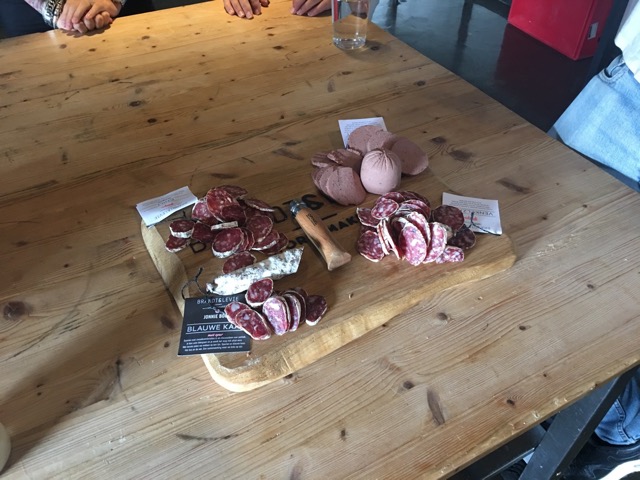 An Austrian saying they indirectly introduced me to, “vom schnörrli zum schwänzli” — which translates to a one very familiar to English ears, as ”nose to tail” — totally informs their work. Nothing from the pig is wasted. The carcasses are delivered from the slaughter-house halved (makes breaking them down easier for the in-house butchers) but that’s all. Apart from that, they’re intact down to their tails and those lovely kidneys, wrapped in their protective layer of fat.

You could see some of the carcasses that had just arrived from the slaughterhouse on the Saturday when I visited. They were destined to wait in the cold store until Monday, around 3am, when the early rising de-boners arrived there, to start butchering them, removing the bones, breaking them down, ready to start being used in sausages. 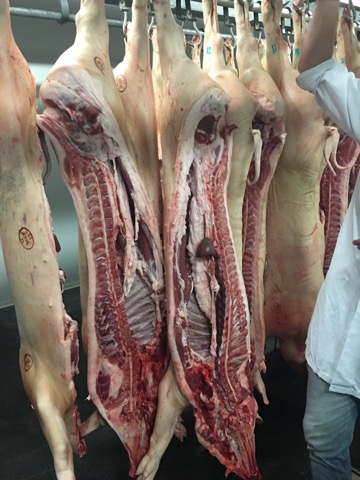 Tails cooked (grilled or used in a stew for the crew). Blood used in hot-dogs that they sell from a van at festivals

Salami & coppa and pancetta and all manner of hams.

Believe me, their small retail shop right next to the production floor is a joy to behold. I nobly restrained myself from spending the equivalent of the GNP of a small African country on hundreds of kilos of this great meat. Feast your eyes…

The pig breed they choose to use, the Baambrugse isn’t a pedigree that I’m aware of and Google searches fail to throw up any real information for it. From conversations with the team at B&L, it sounds more than a little bit of a “Heinz 57 varieties” mishmash but it’s a great mixup nonetheless. Duroc (of course!) and Mangalitza are a couple of those breeds you’ll know of that go to make up some of this black and tan, great tasting, pig. Rosy red meat, great fat coverage. Beautiful to eat. 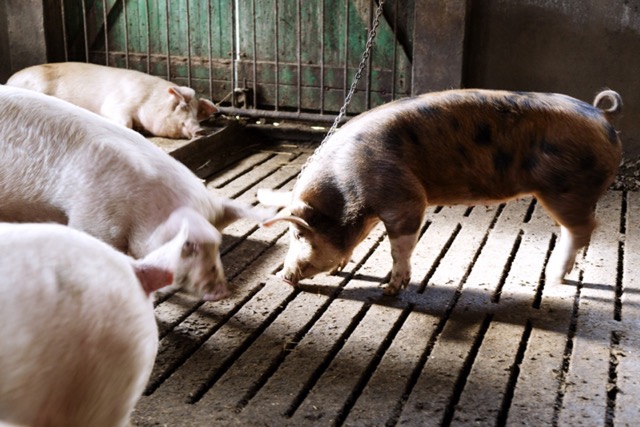 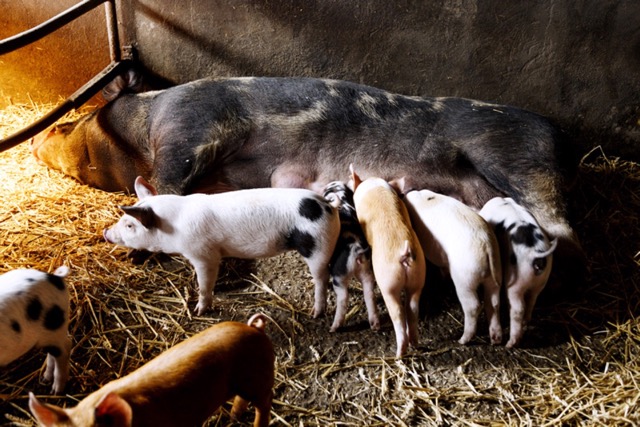 Early on, B&L decided to buy from only people that they’d come to know and trust, who in turn shared their ethics & philosophy and chose three farmers from a small grouping called “Big Baambrugs” — a couple of whom only have around 20 of these pigs running around at any one time. 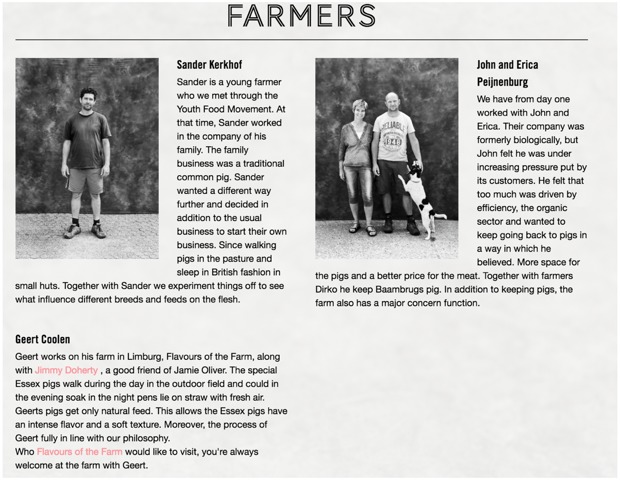 A factory farm, production line, “roll ‘em in, roll ‘em out” operation they definitely ain’t. They all care deeply about their animals, love them, cherish them and want to see this smaller style of farming, using non-intensive methods become much more the norm.

The Dutch, like the English, rather too enthusiastically embraced the “move to factory farming” idea back in the 1950s, 1960s & 1970s and it’s only quite recently that any real pushback — by anymore than a few Green party types, at the time labelled  “weirdos” or “Luddites” — against this system has started.

I should know; the pig farms I grew up on weren’t huge at the time, nothing like the ones covering acres and acres that developed later, but they were at the fore-front of breeding programmes looking for speedy weight increases & a concomitant reduction in the time taken before they could be taken to market (rather than for ‘taste’) and a profit taken but had already starting moving pigs in from the outside, into new, concrete, cavernous, brightly lit buildings where they were “protected” from disease and the ravages of the elements but which in turn meant that we had to start docking piglet tails — as they too closely packed together and under stress started biting at each other — and increasingly resorted to using antibiotics both as a prophylactic and to encourage quicker growth.

I didn’t know the error of my ways at the time; never saw this as cruel towards the pigs and bad for us as well, indeed, believed that this was better for the pigs. But I apologise here and now. Mea culpa, mea culpa, mea maxima culpa.

Anyway, having got that off my chest, let’s get back back to Holland: slaughtered close to these farms, by Jan Voordouw in Woerden, the pigs will have arrived 2 days beforehand giving them time to acclimatise, relax, draw breath and for any stress toxins to be leached from their system. Jan speaks about talking to the animals to relax them, of hand feeding them, even milking old cows, as well as the importance of just simple kindness towards them. His operation is tiny but he believes that this model of small, local slaughterers should be one we insist on a move back to. 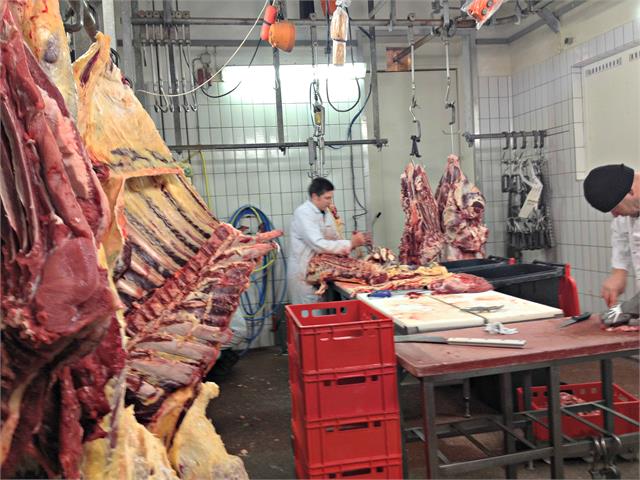 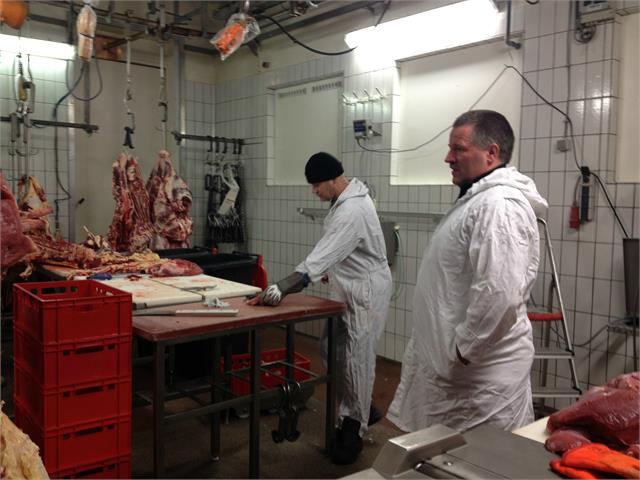 Accepting that we eat the animals that we kill, the boys at B&L and the good people in their small supply chain is the very epitome of how things can and should be done.

So, one last shot of the Saturday quiet in the sausage plant, to close this piece on B&L 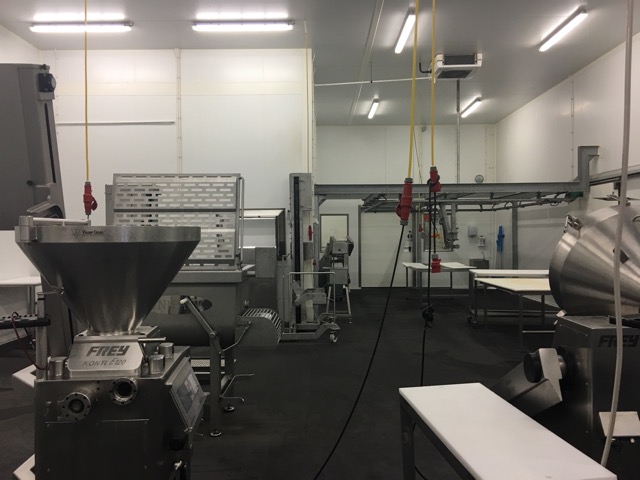 Soooooo, how does that relate to you, gentle reader  — who maybe doesn’t live in Holland so can’t quickly or easily get to B&L — and who do we have here in England that’s looking at the same things — sustainability, ethical treatment of animal, carbon footprint awareness and all the rest of those good things that we all need to have to do, to stop the planet declining into a terminal tail-spin?

The folly of the long distance transport of livestock was graphically illustrated by the foot & mouth crisis in England. The long term effects of this are still being felt and are still affecting animal welfare. The lack of local, small abattoirs has already had a serious impact on livestock farming. The nightmare of the UK and other countries opting everywhere for the USA’s mega-feedlots and meat processing plants looms ever closer – and this, just at a time when public opinion really is coming around to the need for good local production, concern for animal welfare and the advantages of keeping stress to a minimum during transport and slaughter.

This BBC report from all the way back in 2001 shows how far things still have to go before we get back to a system that we can actually justify when discussing the farming and killing of animals. And if we can’t do this, then we should, ethically, stop killing them, don’t you think?

Well, I’ve mentioned before Hugh Fearnley-Whittingstall who’s possibly the one person most easily recognisable to the general public in this area. He’s spoken out from the very earliest days of River Cottage, in support of small, local suppliers producing food that they love for local markets. He’s also spoken out for sustainability (the battle against the EU on fish) and against waste. He’s on the side of the angels and long may he continue his campaigning work

But there are lots of others across England, working hard to build a proper ethical approach to animals, both large & small. I’ve talked about them in earlier posts but one I haven’t mentioned before that springs to mind is The Ginger Pig, setup and supplied by Tim Wilson who’s been doing it like this for 20+ years using the lovely Tamworth to start with. 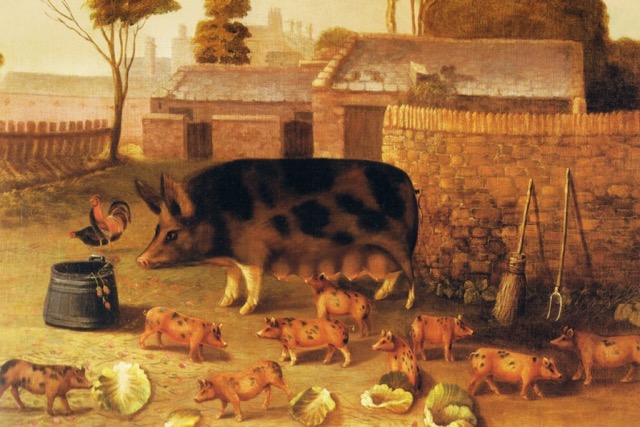 And there’s going to be more about him in the next post. So, keep on reading…

And then closer to my home, is the estimable Big Barn, who campaign for these very same small, local suppliers and encourage you, the buyer of these products, to steer clear of the hyper-large suppliers (supermarkets, factory farms and others of the same ilk) and instead do what our parents and their parents did — buy from people you know and trust, in your immediate locality.

It’s easy to use. Go here, key in your post-code, choose from a huge range of products, pop along and buy.

Or just hand over your plastic and then sit back to await their arrival. Both ways, basking in a warm glow of justifiable righteousness, knowing that you’ve done your own little bit towards taking back the food supply from the multi-national corporates and huge mega farmers who don’t have any incentive to do anything other than make a profit at the expense of these very same small farmers and to the detriment of your health and moral well-being.

OK, that was a bit of a rant. Again. But you get the point 🙂

And one last thing?

The book by Samuel Levie — which, if nothing else means I’ll have to pick up the pace on my Dutch language lessons — is well worth buying. Some of it I kind of get and can muddle through and the recipes are reasonably easy enough to fathom out but there’s a huge amount of information and writing in there that I’m currently missing out on. So, until he produces an English-language version (which he has said is in the pipeline), Google Translate & Dutch speaking friends are the route to Worst enlightenment. 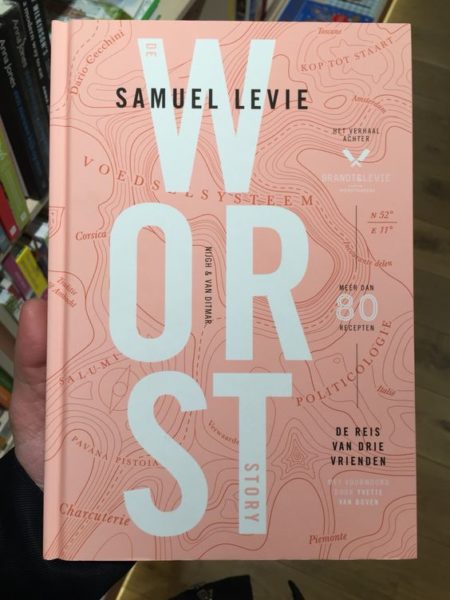 Oh and finally, a teaser… 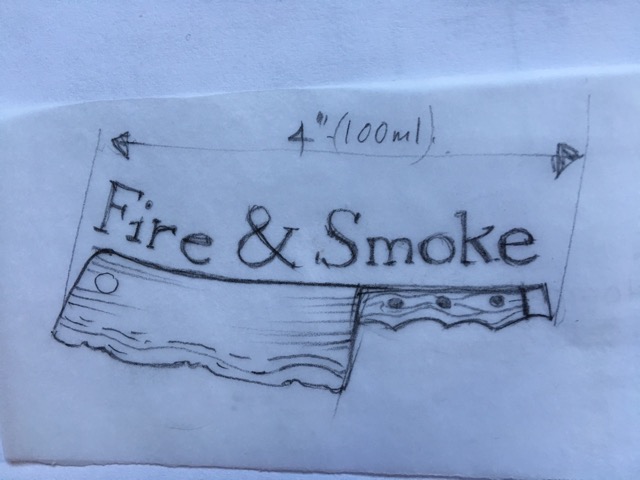 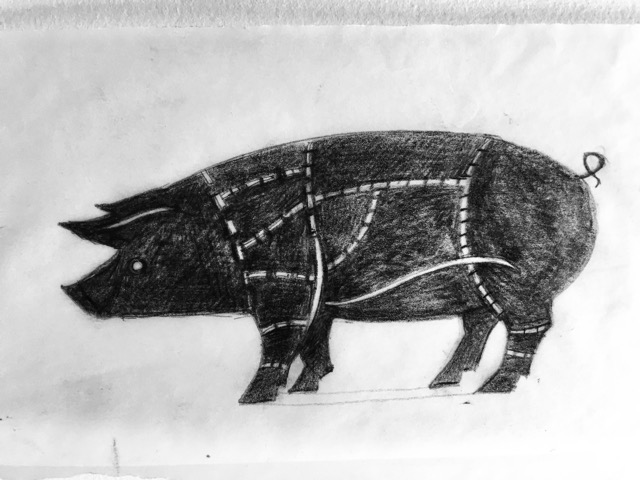