Pigs may eat crap; we shouldn’t treat them like shit…

Do I really want to go near religion in this piece? Especially at this time of year when the insanity reaches its annual crescendo and the twin obeisances towards both Mammon and bearded sky pixies seems unending ? Yeah, I suppose I really do.

Dietary rules that started in those religions that had come into being, via visions and voices conjured out of the sun-frazzled brains of some zoned out lunatic, who’d spent far too long alone in the cauldrons of the deserts in the Middle East, lurching around, dehydrated, starving, whilst trying to “find themselves” — said lunatic normally being shunned (or locked up for their own safety) by any sensible, sane society — somehow managed in a comparatively short space of time to deny the inhabitants of these countries (and anyone who later fell victim to their ongoing madness, yeah verily, right up until the present day) the joys of eating pork. Sheer, diamond-hard, straight down the line, total insanity, I think you’ll concur?

And whilst I could say “more fool them” and “great, that leaves more of this deliciousness for the rest of us sane people”, I’m going to explain how it came about. And why ‘they’ (the mullahs, the rabbis and the rest of those folk maintaining this stricture as some sort of  way of ‘getting closer to your god’) could safely revoke these laws. But won’t.

Pigs eat shit. Simple as that. Along with pretty much anything else, as part of their omnivorous diet. That’s a sensible survival strategy and a solid evolutionary move: they won’t find too much competition for this brown stuff amongst the bigger animals (worms and beetles are a different matter). But it’s also not a move necessarily guaranteed to make them friends with the humans who produce said ordure. In the Near East and Middle East, areas not exactly known for their large, green forests — the pig’s ancestors  after all were used to roaming through woods digging up tubers and Hoovering up acorns — these earliest domesticated swine kept close to the burgeoning villages, towns and cities, eating faeces and other crap and even the occasional human cadaver. 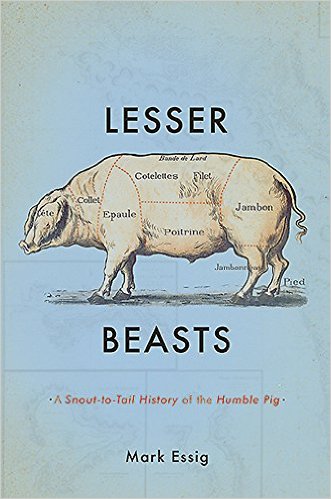 Mark Essig, in his 2015, “Lesser Beasts: A Snout-to-Tail History of the Humble Pig“, argues that this is pretty much down to the vagaries of local geography (albeit with a sprinkling of arcane religious navel-gazing intricacies thrown in — where would we all be without asking the really important questions such as “how many angels could dance upon the head of a pin”, after all?)

“…with the Romans, the Italian peninsula is much wetter, so you have oak forests where the pigs can graze.”

Starting around ten thousand years or so ago and centred around the area that we now call eastern Turkey, us humans were moving away from our previous nomadic routines, settling into villages and larger groupings and starting to produce veritable static mountains of what we humans still produce best: rubbish. The native wild boar, omnivorous and not too proud to go scavenging anywhere he thought he could find something good to eat, found this a really rather convenient addition to his environment.

So the bravest (or most fool-hardy) amongst them started hanging around these rubbish tips, despite the closeness of our presence. We then proceeded to kill the most aggressive ones, those most prone to taking a bite out of our calves or spearing us with their (believe me!) razor-sharp tusks, leaving just those most docile and more placid ones alive and thus able to pass on their genes — hence, the ancestor of the domesticated pig pretty much as we know it today, came along.

These ‘bad’ eating habits however, led certain of the Middle East cultures and religions — including those hewing to the newly emerging Judaism — to consider it pariah, outcast, unclean. Pigs after all are just fundamentally different from the other animals that we’d by now managed to also domesticate, such as sheep and cows. Those are herbivores and have to be put out to pasture. Pigs, on the other hand, had lived right amongst us Europeans — running freely in our roads and streets or beside (or even inside) our houses, eating the stuff we’d discard and acting as great ambulatory waste disposal units.

“Being a grazer like a cow requires very little brain power, but being an omnivore requires real smarts to secure your next meal.” Lessig, op. cit.

And then the Romans arrived, marching through the countryside (as they were wont to do in their regular forays out to conquer the rest of the planet, to “civilise” them), settling down, building roads, viaducts and cities. And they really, really, really liked pork. The Romans just let pigs continue their foraging way of life in the huge forests around these cities, then shipped them inside, to kill and eat. And because pigs weren’t wallowing in the streets — making the place look untidy & unhygienic — the Romans didn’t think of them as unclean and were thus at a loss to see why the Jews (and others) would voluntarily give up such an incredibly useful creature. One can, after all, use a much higher percentage of pig’s flesh than that of a goat or cow, plus pigs happily drop a lot more offspring per year and get to a suitable age to be slaughtered much more quickly, so require less costly husbandry.

The very earliest Christians had (rather unimaginatively) copied the same dietary laws banning pork as their Jewish neighbours, but then the New Testament with its new rules hove into view and changed all that. (See how easy this shit is, you religious types? Just re-write those rules. Problems solved at the stroke of a pen. But you won’t. Of course. You morons).

So now set free to munch away as often as they liked (except on Fridays) on a delightfully crispy, moist, dripping with fat, pork chop, Christians seemed almost to define themselves by this great new new dietary ingredient which may well have helped to start a particularly pernicious (albeit absurd*) piece of anti-Semitism, known as ‘the blood libel’. This asserted that the Jews, driven almost mad by being denied any access to pork, therefore secretly lusted after its closest equivalent: the flesh of humans. In particular, any non-Jewish children were supposed to be in perpetual danger of being snatched from their houses or off the street, killed, roasted, salted & peppered (to taste) and then eaten by these Jewish kidnappers, who frugally not wishing to waste anything, would also then use the children’s blood as an extra special ingredient in their matzo or as some sort of mysterious magic or totemic ‘potion’.

“And so it added to the uncanniness of having the pigs around. Here are these creatures that eat what we eat, they live amongst us and yet they might turn around and kill and devour us.” Lessig, op. cit.

* [don’t mock them, we’ve believed similar lies from Trump, the great Orange Stain and from the Brexit conflagration starters only very recently].

In reality of course, children would have done well to have worried much more about the pigs themselves. Medieval Europe had a quite serious problem with roving bands of feral pigs chewing off kids body parts, even at times killing them. But these porcine offenders weren’t just themselves killed as punishment for their dastardly crimes. Nope, not that simple, these are religious people we’re talking about here after all. Nope, instead they were put on trial. The picture below is supposed to depict a 15th-century pig from France, who’d managed to break into a house and had then killed the unfortunate young male human it found inside whilst busily chomping on his face and neck. The ‘guilty’ (not 100% sure how they proved this claim but…) pig was first captured, jailed, then tried and convicted and finally hanged*.

*[don’t mock them, the English managed to jail and hang a monkey, believing it was a French spy, back in the early part of the 19th Century. Hell, they even wrote a song about it:

But the freedom the pigs had enjoyed up until now to roam around in this manner (absent their child murdering habits) wasn’t going to be able to last for much longer. The West inexorably became more and more industrialised; so too did its burgeoning pig industry. Distilleries pushing out ales and beers chose to keep pigs close by, who were then fattened up nicely on the by-products from the grain needed in the manufacturing process. And breeders by now had found that if they crossed the — typically leaner — European variety of pig with the rather enormous varieties being newly imported from China, these were much better suited for the “cooped-up in a sty” lifestyle rather than the “let ’em loose, let ’em make their own way and we’ll round ’em up later” forest based approach.

That in turn led, inevitably, inexorably, to the massive industry, based on converting huge numbers of pigs as quickly and efficiently as possible into their component parts thence to be shovelled into the inexorable gaping maw of the eating public, exemplified by and centred around the huge, sprawling Chicago slaughterhouses, which Upton Sinclair made infamous in his exposé novel The Jungle.

And so we come to today. We still factory farm far too many of these lovely creatures. We can and must change this and consumer pressure (along maybe with governments listening to and acting on their voter concerns — and wouldn’t that be a novelty eh?) will make the giant agri-pharma combines change and improve.

OK, enough for today of the anti-big business and religion rant. But still, in all honesty, all pigs ever wanted was a little garbage. OK, yeah, fine, maybe they have eaten a few kids along the way, but we humans have eaten far, far, far more of them (around 12 million of them or nearly a million tonnes a year in England alone).

Pigs are (as we’ve already established) both whip-lash smart and hugely resourceful, and they’re not at all deserving of the way humanity portrays and treats them. Pigs may eat shit, sure, but that doesn’t mean people should treat them like it.