“Saddle up the old Hampshire.”

Nothing to do with a Neil Young song. That after all was about a horse. Come on, get a grip there.

I debated whether or not I should write about this pig — it’s not rare, it’s not especially tasty (indeed, it’s downright bland in comparison with many others I’ve talked about before), it’s not a heritage breed and it’s not even hugely noteworthy history-wise, except in volume terms. 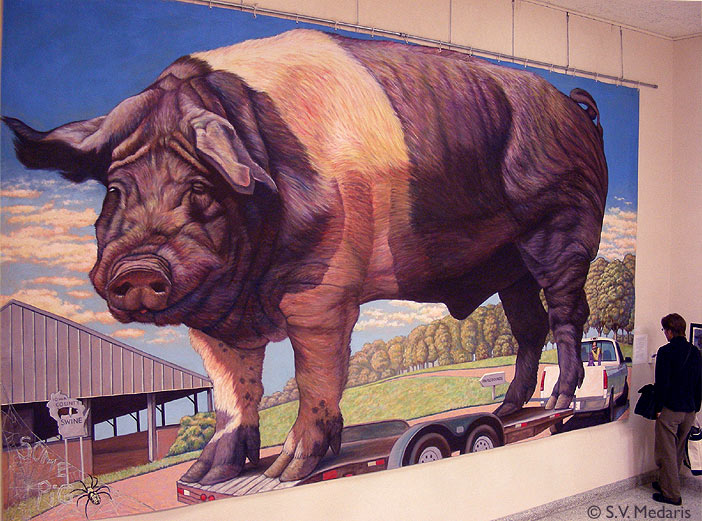 But still it’s a PIG. And whilst indeed some are more equal than others, all are worthy of note to one degree or another. So, without any further trepidation, off we go.

Called for a long time — and for pragmatic reasons: it’s less fatty you see? — “the thin rind hog” in the US, it’s nowadays considered one of the most important pigs across the globe (at least in the aforesaid volume terms) but in some respects the Hampshire breed could actually be thought of as a ‘British native’ one — albeit an immigrant with its own legitimate Green Card by now — as the original breeding stock was taken from a Saddleback herd on a farm in Hampshire, UK first coming ashore in the US in 1832; this auspicious date being duly recorded in the “Hampshire Blue Book” — its US breed book — when Issue One was published in 1928.

After 1890 the breed lost its “The Thin Rind” nomenclature and was instead renamed after its English county of origin and it’s been the “Hampshire” ever since. Used extensively as the sire in cross-breeds for the pork and manufacturing markets in the USA (and indeed now many other countries) precisely because of that very dominant leanness gene. The breed has pricked, erect ears — unlike its Saddleback ancestor whose floppy ears would have developed after the two breeds diverged — although this one (above) from the NWS show looks as though its been primped and pimped for a beauty parade… and a prominent ‘saddle’, also seen to great effect above

The first of these new Hampshires was seen arriving back in England when they were re-imported from the USA in 1968 by the ‘Animal Breeding Research Organisation’ (ABRO) to be used as a ‘random sample’ of the breed. After some testing, the pigs were judged fit to be released and started being used as a new source of breeding stock inBritain.

Another large influx was seen in 1973 when a further 40 pigs from a number of different USA bloodlines were imported via Canada — import restrictions in place at the time prohibited direct imports from the USA. The shipment included a boar that was grand champion at the 1972 Toronto Royal Show; the same one that later went on to take breed champion prize at the Royal Show in England in 1975.

British Hampshires rapidly became a major export for us Brits; in a twelve month period from August 1978 to August 1979, more than 600 head were exported to 14 different countries.

So, popular, yes? It is indeed. And as I said at the beginning, that doesn’t necessarily make it a reason not to include it on this site. Purism is for the birds.

And finally? This 600 lb beauty was found roaming in Alachua County in Florida in September 2016. I mean how the frick do you mislay a 600lb pig? There’s no note as to whether it was ever reclaimed by the owner or if it went to auction — as threatened by the police — and turned into a large quantity of hams & chops… 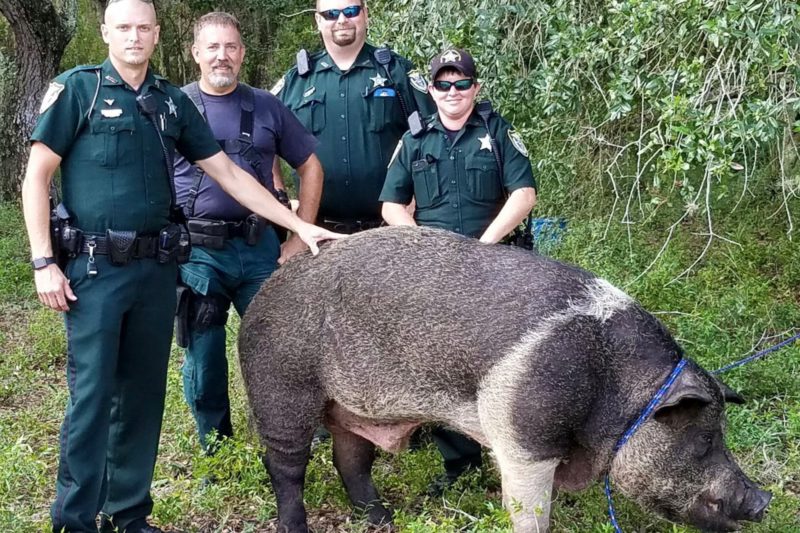 And finally, finally; as a side-bar. the inhabitants of Hampshire, England have been referred to as “Hampshire Hogs’ since the late 18th Century; so proud are they (apparently) of this nickname that they have a large bronze statue of the pig as a centrepiece in front of their Winchester council offices — it’s a pretty crap piece of work if truth be told, but hey… 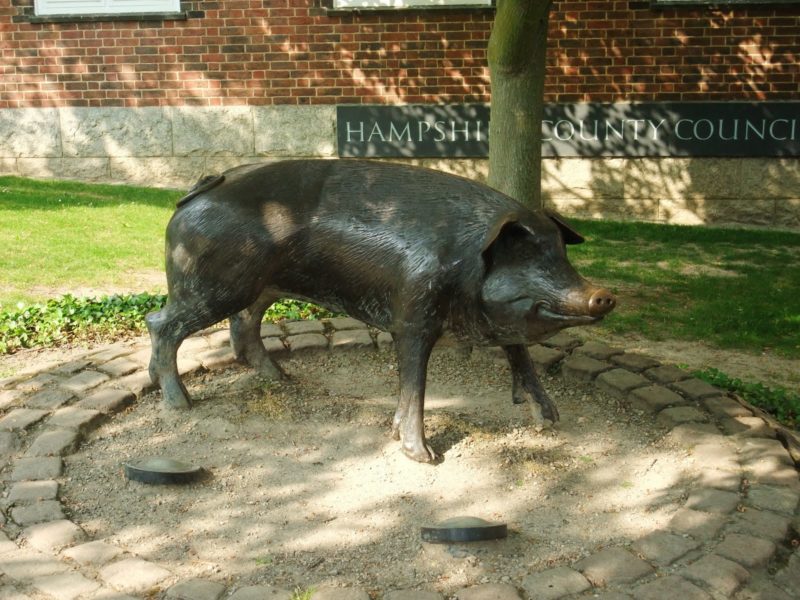