So, what’s so offal about the 5th quarter?

“Till cramm’d and gorg’d, nigh burst With suckt and glutted offal.”
• Milton, Paradise Lost X. 633

Mathematically impossible of course, but as it’s an Italian phrase, a large dose of artistic freedom and licence is allowed, nay, is mandatory; hence the ‘fifth quarter’, used as a euphemism for offal.

Which serves as a reminder that meat doesn’t just come pre-packed in styrofoam coloured packaging; at least not naturally. Which is why I keep talking about offal. 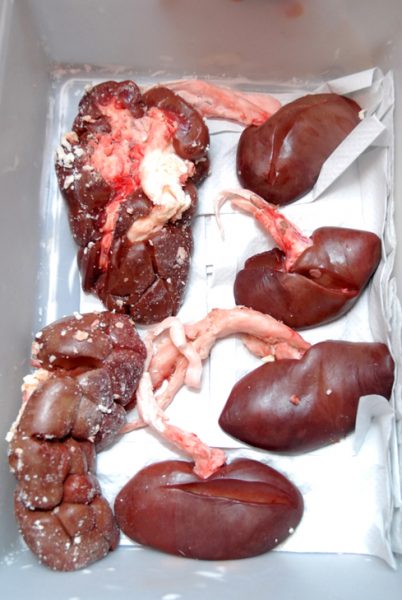 Technically it’s defined as: “those parts of a meat animal which are used as food but which are not skeletal muscle”.

The term comes from “off fall”; originally named after those pieces which fall away from a carcass during butchering and originally applied principally to the entrails. It’s since been extended and now covers all of the “internals” including the heart, lungs & liver (collectively known as the “pluck”), all the abdominal organs and extremities: tails, head & feet (which I talked about in this post) along with the brains and tongue. Bird offal is known as “giblets“.

Another, archaic, English word for these insides, especially those of deer, was “umbles”, a term which survives in the expression “to eat humble pie” (to be apologetic or submissive).

The taste and texture of offal depends a lot on the particular organ, and on the species and age of animal from which it came. Offal from calves is generally held up as the finest, providing as it does, large organs of a more delicate flavour and texture. Lamb’s offal is also good, but sheep, pig, and ox offal inclines towards a more coarse flavour and texture (or so say some. Me? Bring it on please!).

Offal doesn’t keep well, so is either prepared and cooked quite soon after slaughter or turned into a product suitable for storing more long-term such as brawn, haslet, paté and some sausages.

The type of offal used (or indeed whether any is used) in any given culture depends very much on the favoured meat animal, which may in turn depend on those weird, stupid, just plain dumb, religious dietary laws. Muslim countries use a lot of lamb offal — as they’re too fixated on some bearded sky pixie ramblings to make the sensible choice and also eat pigs. The Chinese on the other hand, sensibly, have numerous ways of dealing with the organs from pigs.

Offal is a great source of protein, and some organs, notably the liver and kidneys, are particularly nutritionally valuable. In most parts of the world, especially the less ‘developed’ countries, it’s prized accordingly. In the English-speaking world, however, the pattern is a little different, at least in more recent times. In North America, there has been and still exists a squeamish attitude which prompted the title “Unmentionable Cuisine” for a (hugely readable and enjoyably written) book by Schwabe.

In Britain, where there used to be no, or anyway few, qualms about eating offal, consumption declined in the last half of the 20th century, although offal was in fact still eaten in processed foods — where it is not “visible” — and its use is increasing again recently as people rightly go for the “nose to tail” approach .

This squeamishness? Heads and feet tend to remind people that (shock!) this food is of animal origin. And a certain ambivalence about eating certain bits of an animal’s anatomy, such as testicles, is expressed through the used of euphemistic names.Rather unsurprisingly, in the USA, they refer to “organ meats” or “variety meats” instead. Euphemism is all. Some offal has rather surreal shapes and those strong flavours, which are not to everyone’s taste. And the meat of feet and ears is characterised by textures which are gelatinous and crunchy at the same time, a combination which is more disliked in the western world, although greatly appreciated in the Orient.