Since 1937 when the Hormel Corporation first introduced their new “spiced* ham” or — as no one is actually quite sure what it stands for — it may actually have been named as the more honest “spare meat” (albeit one that’s redolent of the current “mechanically separated recovered meat”), Spam (SPAM on the tin & as mandated by Hormel’s trademark lawyers) has grown to become ubiquitous across most of the world. *[there is no spicy element discernible. None at all.

Cheap & able to be safely stored for a long time, its use in WWII both in the US (as part of the troop rations) and the UK (here as cheap, reliable protein source for a blockaded nation) meant that its success was pretty much assured. Over 150 million pounds were used in the war effort, making Spam a dietary cornerstone. (Apparently, they also used Spam’s fatty outer layer to waterproof footwear & lubricate rifles.) In every country where they were stationed, the American soldiers would have introduced it to the locals, giving foreigners their first taste of US food in the shape of SPAM.

I can only imagine the looks of disgust on some of these people’s faces? But needs must eh? And it’s been a huge success story for Hormel. They’ve sold more than 10 billion tins of it, quite recently managing to get rid of that gag-inducing (for some) jelly-like covering by using potato starch.

It’s even become a ‘delicacy’ in some areas of the Pacific and the Far East. In Okinawa, Japan, the product is added, alongside eggs, to onigiri as an ingredient in their traditional chanpurū dish. Korea chef David Chang apparently has mixed memories….

That said, in his Momofuku cookbook from 2009, he’s got a quite bizarre recipe where he uses Spam in his riff on the Hawaiian musubi, their version of a sushi roll.

And from a restaurant (Spoon by H) that Chang has called ‘his favourite restaurant’ comes this really lovely dish. 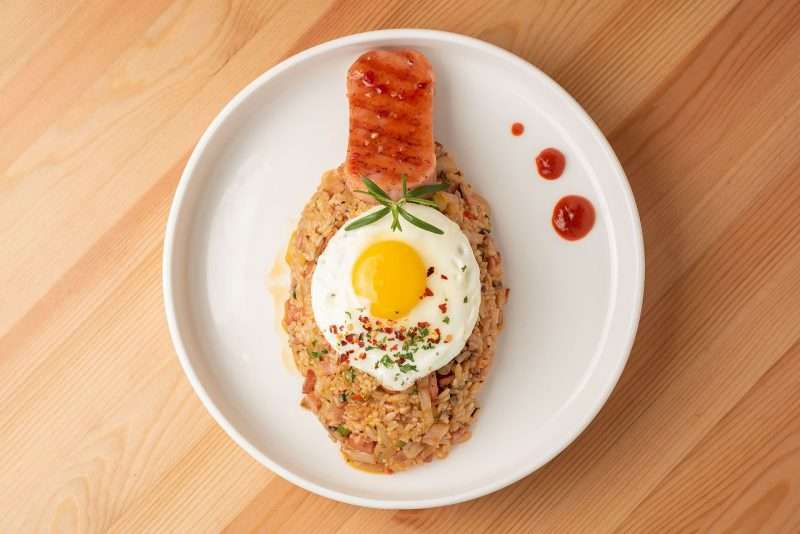 Spam fried rice with egg at Spoon by H

Described thus by Eater, I defy you not to want to scoff this now. All of it.

…the Spam kimchi fried rice. The classic Korean home staple is packed with generous amounts of its namesake meat, amber-colored extra-fermented mukeunji (very aged) kimchi, and crowned with a sunny-side-up egg. Hwang prepares batches of rice throughout the day in small batches, so the grains are just firm enough to hold an even coating of all of the dish’s rich accoutrements. The dish is festooned with flavoring elements that the diner can add to taste: There’s another slice of Spam on the side and a sunny-side-up egg without a hint of browning, which makes it easy to cut and distribute the egg whites with a spoon.

It’s not now seen as anywhere nearly so desirable over here in Merrie Olde England. Since the 1950s, it’s been portrayed as food fit only for “poor” people and, looking at the ingredients inc. high levels of fat, sodium, and preservatives, I can understand why Thatcher* (who, like most Tories had a visceral hatred of poor people) referred to it as a “delicacy”…

* [Yes, that same evil witch who earlier in her career was happy to steal milk from the very mouths of school kids].

All that said, I liked the bloody stuff. I have hugely fond memories of eating golden, fatty, yet at the same time, crispy, spam fritters as a kid, cooked either by my Mum or eaten as a school dinner. They along with their close cousins, corned beef fritters, were absolutely gorgeous. At least so my memory assures me, from this far away distance in time. I actually can’t recall the last time I ate them though since early childhood.

So, prompted by curiosity to see whether they were as good as I recall, I spent an hour or so YouTubing (is that a verb now by the way?) around to see what recipes I could find — and we’ve all been lost down that ‘research’ rabbit hole, for hours & hours haven’t we? 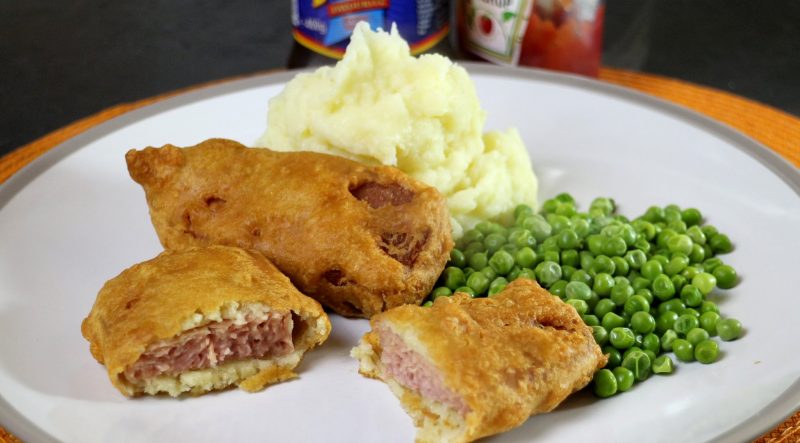 And lo, Heston Blumenthal hove into view, with his take on “posh spam fritters”. The guy is certifiably insane but it’s the insanity of genius. The recipe below is a little light on detail; I’m going to experiment first before diving in with the Pata Negra ham as an ingredient but he served this to a group of people many as old (or older) than I, all of whom got what he was attempting, straight away — the tastes and smells and memories of a school dinner, filtered and altered through the prism of his madness, his attempt to surprise jaded 21st century palates by re(de-)constructing a sort of Back-To-The-Future meal summoning up forgotten flavours, textures and taste sensations.

This is the (rough) transcript of what ingredients are needed and the process of b̶u̶i̶l̶d̶i̶n̶g̶ cooking them. I’ll amend it as I find things that go wrong until I’ve given you as close as possible a copy of this meal that I can put together.

Add to this in a bowl, a mix of white port, red port, Madeira & brandy that’s been reduced down to just a tablespoon of thick “syrup”

Mix it all together.

Take it out of the bowl, and then flatten the mixture between greaseproof paper with a rolling pin.

Square it off (it needs to be about 1cm thick) and from the mixture, you need to make two rectangles, saving some of the mixture to then…

Build a wall around the first rectangle about 1.5cm deep, which space is then filled with a pea & cabbage puree mixed with diced duck liver & black truffle.

Once that’s built, put the other “lid” on top.

Dust this fritter in some seasoned flour then dip it into a batter made of flour, carbonated water & baking powder. Use Japanese panko breadcrumbs, light & crunchy to give a different texture.

In the meantime, make the mashed potato, which, creamed & riced contains a braised cabbage mixture bound in a thin strip of cured pork fat. “Organic Smash!” as one of the lucky eaters called it.

Bring the mash together in a flattened ball using some cling film keeping the cabbage mixture bound inside.

The final touch is the “lumpy” school gravy made of a reduced beef stock with pieces of bone marrow served in a school milk bottle. 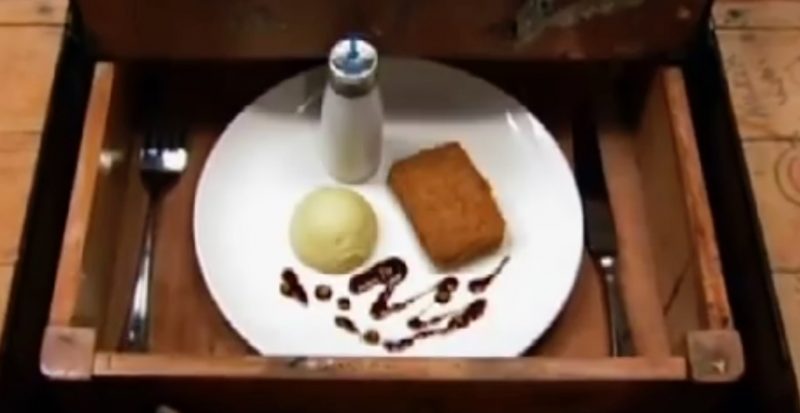