Syndactyl. It’s to do with a PIG, not some species of dinosaur.

One of the more peculiar pigs on the planet has to be the Mulefoot hog, so named as it’s syndactyl. That is, it’s not cloven-hoofed: the two central digits on both the front and hind-feet are fused into one, similar to that seen on the mule. NOTE: the fact that it’s not cloven-hoofed however still doesn’t make it an acceptable addition to the diet of those religious maniacs with dietary laws as, like all pigs, it’s still an omnivore, not a ruminant. Poor sods eh? The people; not the pigs. 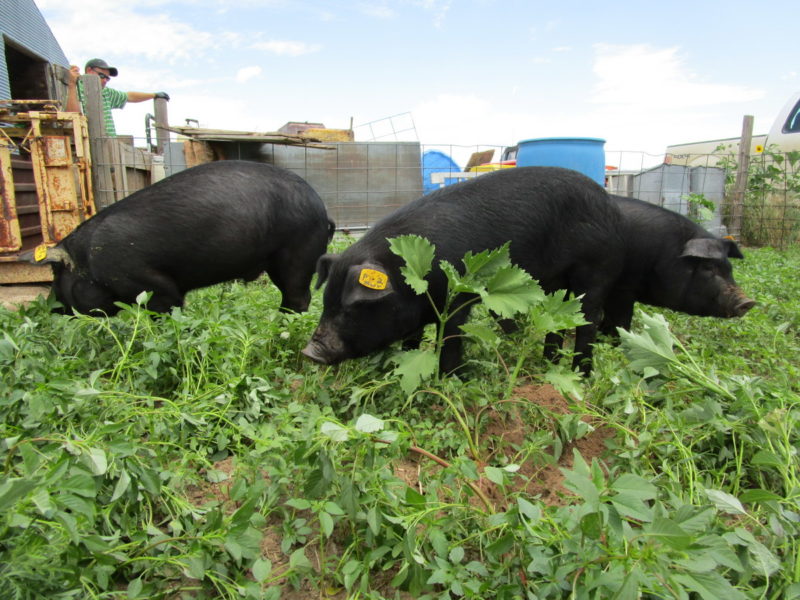 Whilst the origins haven’t been tied down exactly, it’s likely the breed, like so many of the American “native” ones, actually descended from those same Spanish hogs starting to be brought to the Americas in the 1500s, that also gave birth to the Choctaw (and let’s not forget the marooned Ossabaw…) It shares some attributes with the former (inc. the single hooves) and the breeds very likely come from that same ancestral stock. Until the late 1800s they were after all only loosely selected and managed; not much was done to enhance or improve the breeds and they were pretty much left just to forage for themselves.

This specific Mulefoot mutation was first recorded as showing up around the 1900s in the southwest USA & Mexico.  It also became known as the “Ozark hog” in Missouri and Arkansas. For a while, it was hugely popular as, like a lot of its cousins, it’s tough, productive & easy to fatten. Curiously — and like other syndactyl pigs — it was for a time (unfortunately, erroneously as it turned out) believed to be immune to foot and mouth disease, swine fever and cholera, which would have helped encourage its popularity with breeders. However, this single hoof did help alleviate the threat of foot rot, thus making it more suitable for wetter, boggy areas.

In the 1800s there was a huge demand for hogs to help fuel the relentless westward expansion and this breed helped the settlers in their onward travel. So, by the first third of the 20th Century, Mulefoot hogs were to be found distributed all throughout the Corn Belt. They were also common along the Mississippi River Valley, where farmers annually moved their hogs onto islands in the river, putting them out to safely forage there in the springtime then returning to collect them in the fall — this practice was however terminated by the Army Corps of Engineers in the 1950’s…

The National Mulefoot Hog Record association was organised in Indianapolis, Indiana, in January 1908. There was sufficient demand (and numbers) that two additional registries were also founded. By 1910 there were 235 breeders registered over twenty-two states. Mulefoots were also taken to Canada between 1900 and 1920 “although there no attempt was made to establish a herd book and pedigree records were not maintained”, according to J.W. MacEwan in The Breeds of Farm Livestock in Canada. They’re still being bred there, this photo taken from a small organic farm near Pilot Mound, Manitoba called Harborside Farms:

But breeding “fashions” change and like so many of these similar heritage, now rare, breeds across both the States and here in England, the newer larger, faster growing, less fatty pigs, were preferred and the Mulefoot slowly declined and almost ceased to exist.

That they didn’t was mainly thanks to the efforts all through the ’60s and ’70s, of an Mr. R. M. Holiday from Louisiana who introduced the genes into a new herd, to establish what would become the last group of purebred Mulefoot hogs. He acquired further stock around 1964 from all the then known purebred breeders, and used selective breeding– although in 1976 he also managed to introduce split hooves, ‘prick’ ears and wattles (!) by swapping some of his pigs with a dealer from North Dakota, a mistake he never repeated —  to try and maintain the standard.

By 1976, the registries for the breed had closed; subsequently the herd books, pedigrees and other registration information were all lost.

In 1993, Mark Fields of the American Livestock Breeds Conservancy (later The Livestock Conservancy) had begun working with Holiday to re-establish the breed registry and expand breeding programs to additional farms. Despite these ongoing efforts it’s still on the “critically endangered” list [a categorisation given to breeds with a population of fewer than 2,000 and yearly registrations of fewer than 200] and there are still only around 300 breeding hogs in existence today.

In 2006, having worked the herd for over 40 years, the venerable Holiday decided to retire and sold off the last of his stock to the Maveric Heritage Ranch Co. He lived until he was 96, dying only in 2013. Maveric now own the largest herd of American Mulefoot hogs in the Americas and have started over 40 US breeders with Mulefoot stock. The team there also breed Guinea Hogs and they’ve established a close working relationship with the American Mulefoot Hog Association to jointly carry on with breeding and expansion programs and, like the Ossabaw, Choctaw and Red Wattle, they’re now being encouraged in this genetic quest by the growing number of chefs and cooks around the country using them in their dishes as well as the addition of the breed to the Slow Foods Ark of Taste.

Beautiful looking pigs. Like the Ossabaw from the previous piece; these little darlings come off the fire pit looking hugely edible…