Terroir or tierra? It’s ALL about the land, stupid.

“Pigs are omnivores, and the more options you give them to eat, the better the product is,” says Clay Trainum (of Autumn Olive Farms, Washington State). “It’s all about terroir and we have fantastic terroir here.”

[Clay is from America. But that’s OK, we can forgive him as he gets it. And that’s why this piece about Spain starts with another picture of the lovely Ossabaw; probably the closest American equivalent to the Old World pata negra. His pigs are free to roam across 96 acres of walnut tree and shrub strewn land; he’s especially keen on the autumn olive, a tall shrub with creamy flowers and small, sour red berries that his goats and pigs love.]

Just as terroir for the French, implies a sense of place, so too does the word tierra for the Spanish. But for the inhabitants of the Iberian peninsular, it’s much, much more than just the Gallic emphasis on the local land, the soil, the weather. For them, tierra speaks to a whole way of life; of their animals, of their country, of their history. The Extremadura is an ancient region, one that, almost mystically at times, seems to be at the very heart of the Spanish yearning for the olden, purer, simpler times, so the tierra is the very quintessence of their collective soul. 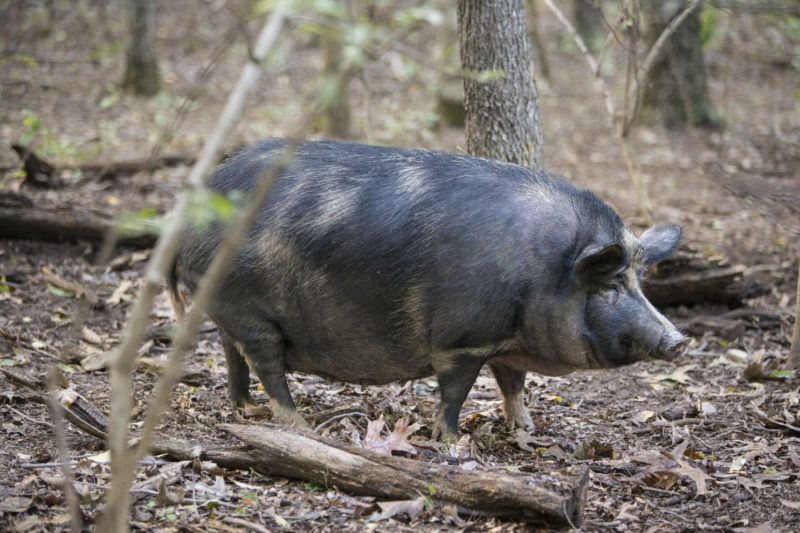 And this still wild, still quite un-tamed area of south-west Spain, is where you’ll find the huge expanses of the many Dehasa, each of them often hundreds of years old, composed of one to two thousand acres of forest partially converted to pasture, running up and down rolling grassy hills. Covered with cork and oak trees — there are five different types of oak nut acorns alone: valley, gall, holm, cork & kermes.

And here it is, during la Montanera, the autumnal season — falling between October and the end of February — when those pigs destined to produce that ultimate pinnacle of ham, the jamon ibérico puro de bellota, start their acorn-foraging. Parched by the sun during the summer months the land turns to lush green pastures, full of wild grasses and herbs, once the early autumn rains start. 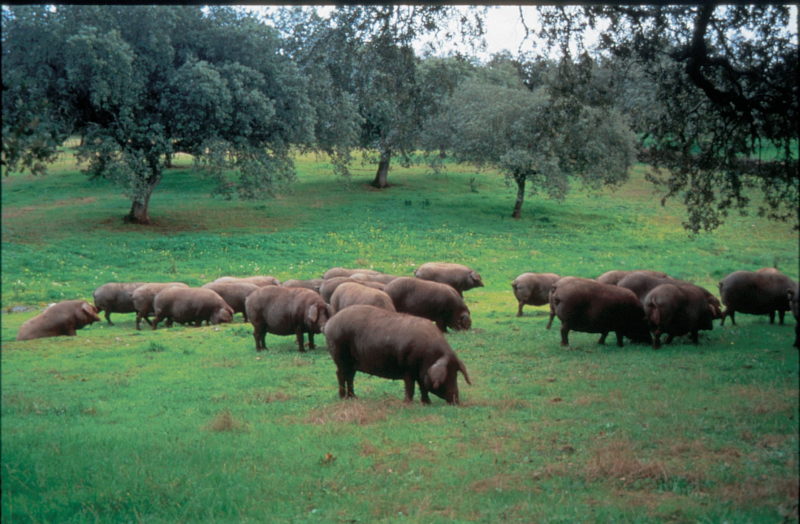 The pigs, let out by the porquero (the pig-herds) start rooting through falling leaves — walking huge distances — to find their beloved acorns which are now starting to drop from the trees. Interestingly, pigs (not stupid, remember?) have been found to select the sweetest acorns first, those from the holm oak trees, leaving the more bitter tasting, cork oak acorns, until last. They’ll sometimes cover up to 14 kilometres a day in search of this manna and for each kilo of weight gained (at an amazing conversion rate of around ½ a kilo a day!) they’ll need to have eaten approx. 12 kilos of acorns, along with a further 5 kilos of grass, herbs, fungi and anything else their foraging brings to their mouths.

They’re first checked and certified as of Ibérico stock by the doughty DOP inspectors who then proceed to weigh them — to make sure they don’t start out above 115kg — as, for full Bellota certification, they will have to reach around 16okg, purely by dint of this foraging. Such a ‘labour’ intensive method of finding their food is totally pivotal to the taste of the resultant ham — which can take up to five years to mature after they’re killed — their daily exercise instrumental in helping the acorn oils to infiltrate those hard working leg and shoulder muscles. 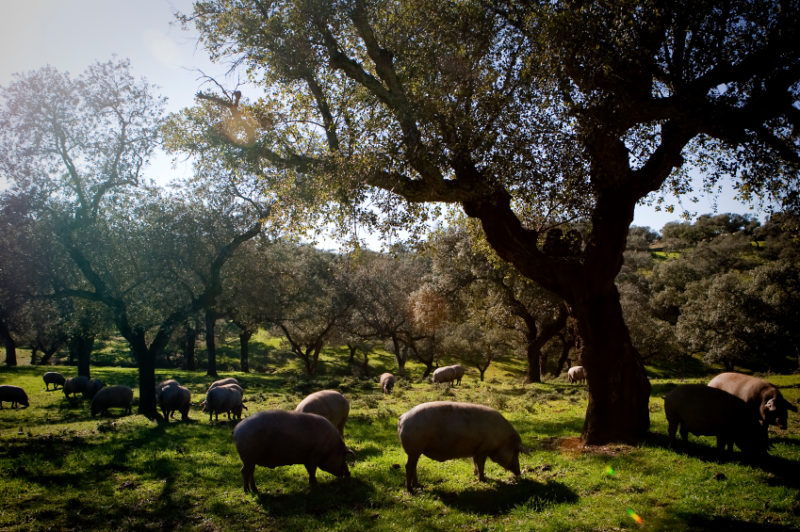 The cerdos are never intensively farmed;  that’s anathema. Each is legally required to be able to roam across at least one hectare of open pasture (with between 2-6 being quoted for the very top-end meat development) to themselves. And these inspections don’t stop with this first check; they’ll go through almost weekly ones, over at least 2 or possibly 3 months, with the DOP team sorting through their fæces and often rummaging around the fields, the barns & the out-houses, trying to find any signs of the banned feeding of grain. One interesting pointer that this possible rule breaking is taking place, is signalled by the pigs running towards the inspectors — behaviour normal in a pig-yard, where they’re fed rather than left to forage for themselves. But no, not for these pigs; they need to be more stand-offish, shy, even downright rude, so such an approach is here a warning signal — if they just stand there or even run away, that’s taken as a pass mark.

And at the end of all this feeding, when they’ve reached their target weight and their oleic acid levels have been checked and re-checked and judged perfect to take the curing process, they’re “sacrificed” (not “slaughtered”). The Spanish have an ambivalent approach to their animals — they can be both cruel and indifferent to suffering, witness not least the barbarism that is bull-‘fighting’ and their uncaring treatment of their hunting dogs — but here they choose to use the word sacrifice as a mark of a deep respect for the pig, a respect for what it produces and a profound respect for how it affects their own lives and that of their wider community.

None of the pigs are wasted, but only a few pass the final inspection at a quality high enough to be awarded the word “bellota” in their description. And this stuff ain’t cheap but then anything further away from the factory farmed, quick killed, quick cured, no taste, hams would be hard to imagine. And taking as it does, upwards of 6 years from birth to arriving on a jamonero near you, this ain’t so surprising. A whole ham, with that trademark black hoof left attached and that coveted black label awarded — the very peak — comes in at around £475 here in England (it used to be less expensive, but hey, Brexit, you know?). And is it worth all this money? In a word, “fuck, YES!”: acorn-fed jamon Ibérico is intensely sweet. It’s floral, earthy, nutty something like a Parmesan, it smells strongly of the acorns that they’ve eaten, with fat so soft and creamy it melts — in your hand, your mouth even, at room temperature, on the plate. You can see it deliquescing at the foot of this delight. No wonder that the Spanish long ago nicknamed these pigs, “four-legged olive trees.”

There’s a whole post waiting to be written on the involved production process necessary to get this ham; this isn’t it that piece. But patience, grasshopper, patience. Everything comes to he or she who waits. For the moment, gaze on these delights, drool and start saving up… 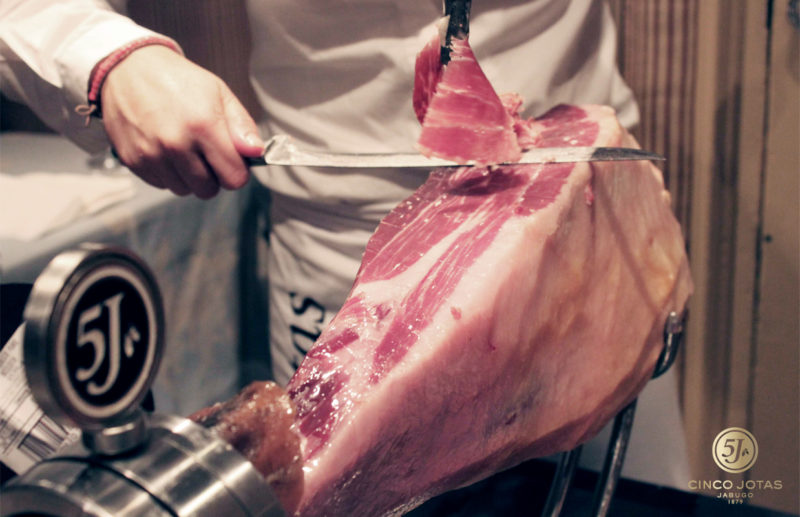