The dreaded words: “are you any good at DIY”?

And when asked, I have to answer “no”.

If, like me, you’re lacking in more than a few of the skills necessary in, say, the building of your own house, re-assembling a dismantled car engine-block or trouble-shooting exactly why that rocket crashed shortly after you launched it, worry not, as the next book I’m going to review isn’t that scary nor does it need anywhere near those levels of skill.

The author, Tim Hayward, started life as a photographer, went into the advertising business (one can forgive him for that, as he left it, after all), moved into critiquing food, is a regular presenter on The Food Programme and a panellist on The Kitchen Cabinet — both broadcast on BBC Radio 4 — and to top all that off, also owns and runs Fitzbillies. It was and is a Cambridge institution — although I have to say we were a little disappointed when we ate there; noisy, over-stretched staff and a real lack of attention to detail — but that said, the take-away Chelsea Buns are still to die for.

He’s also, in his obviously copious spare time, the publisher and editor of Fire & Knives, a quarterly magazine of new food writing — and winner of the ‘Best Food Magazine’ at the 2012 Guild of Food Writers Awards — as well as holding the reins as publisher of Gin & It, a similarly quarterly journal of new writing for drinkers and thinkers

And this, his first book, is a quiet joy to read — it’s called “Food DIY: How to Make Your Own Everything – Sausages to Smoked Salmon, Sourdough to Sloe Gin, Bacon to Buns“.

Indeed, if you consider yourself an urban nouveau peasant (don’t we all?), then Harper’s Bizarre consider this one made for you. Darling. 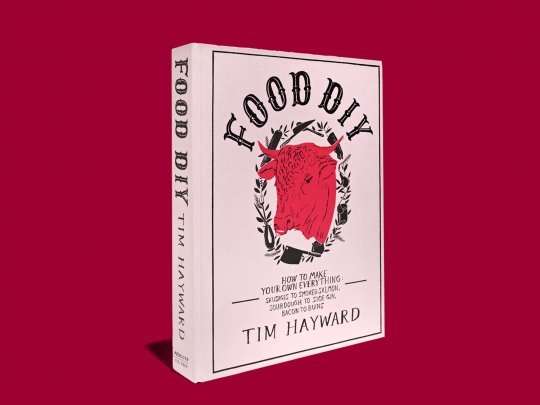 It’s as detailed and precise (mainly detailed, he’s not hugely exercised by exact weights in recipes, apart from when using Prague Powder!) and illustrated beautifully as one would expect by a photographer, just like those by Fergus or Turner and it is, like theirs, a work produced by someone who loves passionately his subject and has gone away, thought long and hard about why and how things happen, and from that journey worked out what is the best way (for the ingredients you’re using) to cook or smoke, or cure or brine or salt or pickle or store.

He inspired my take on the same thing. And is very indicative of what’s important to him.

This is the inside cover. Some are quite bizarre images, yet strangely comforting. 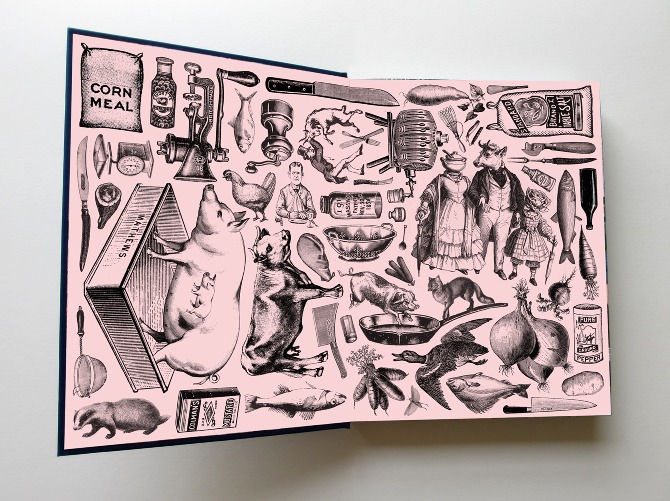 I initially bought it for his sausage recipes — the second book on that subject after Steve Lambs “Smoking & Curing” — and then stayed for his great writing on a huge range of other recipes and subjects inc. making your own butter and cheese, sloe gin, suet pudding and potted lobster. It’s a very English book. And that’s meant as a big compliment. There’s something quintessentially British about Tim. I can’t quite define what it is that inclines me that way, obvious recipe choices aside, but a disparaging reference to Talleyrand’s quote…

…is followed by Tim pointing out that “what Talleyrand and others were incapable of comprehending, however, is that we don’t need sauces in England because we have gravy” before launching into both a soliloquy on the joys of a properly made gravy [HINT: do not even think of the word Bisto here] followed by his own (excellent) recipe for this liquid gold.

Or maybe it was his version of the doner kebab (or as Val was wont to call it, “pensioners’ leg”), butt of many jokes and equally the cause of many, many upset stomachs. Hygiene regulations anyone? Hmmmmm.

Whilst in that recipe he makes reference back to p.320 and “How to make proper gravy” and whilst it turns out a truly excellent piece of food at the end, just as important, was his quote at the end:

“If you have any remaining doubts about the doner, our own St Elizabeth David took broadly the same ingredients – lamb breast, breadcrumbs, flavourings – and used them to make the legendary Lamb Ste Ménéhould. Funnily enough, nobody ever associated her with strong continental lager, fighting on the night bus or weeing (urinating, for my non-UK readers) against lampposts.”

How about Badger Ham? Not one you’ve tried? No, me neither. Val said she’d leave me if I ever tried monkey brains. I think this would provoke the same reaction from her.

Here’s how to start the preparation. Which I’ll leave to you, OK? Me? I’m not going up against a badger. Sorry. 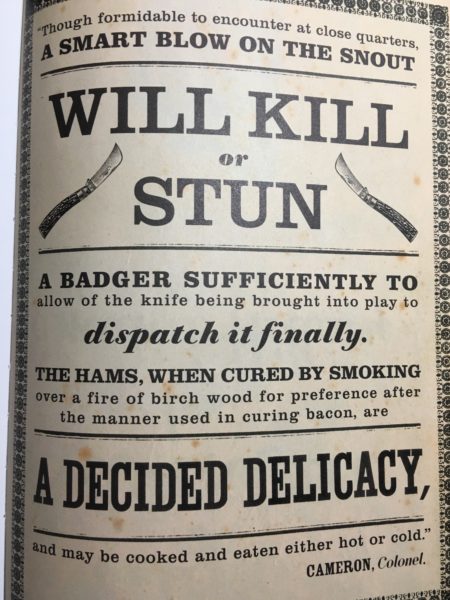 This, apparently, comes from a Colonel Cameron, dating from around World War I. I’ve not been able to find another reference to him, apart from this, and Blimpish though it may be, still…

There’s a strong vein of British humour and self-deprecation herein. I love it.

It was also this book that introduced me to Baron Justus Von Liebig — who I talked about in this piece — where he’s honoured as “The Patron Saint Of Food Geeks” via his own page in the front-piece.

The first recipe I tried out of the book wasn’t pork related but was his one for “Lamb Shank Redemption”. Anyone would break into jail just to sample this if it were on the prison chef’s menu, let alone break out to pop along the road to the nearest pub…

The result was unctuous, rich, deep flavoured and moist. And easy. Did I say how easy his recipes generally are? The DIY part of the title shouldn’t strike fear into the heart of anyone — honestly, if I can do it, you can too!

If you want to strike out into more “do it yourself” territory, how about making your own smokehouse? 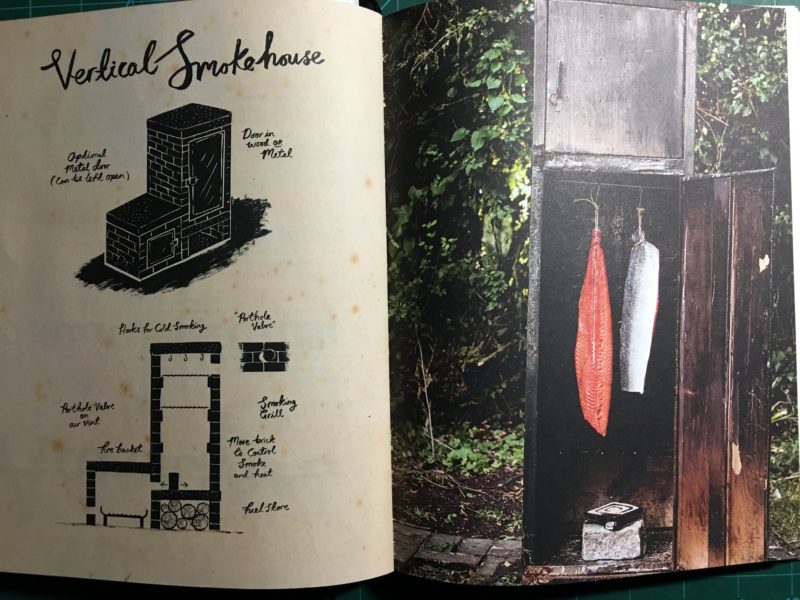 See what I mean? Like an illustration from a Hayes manual but without the sheer terror that brings to my heart. It’s fun. Occasionally frustrating, always exciting, but then what love affair isn’t? Buy it!

Oh and “one last thing”?

How about a recipe for “Eggs poached in beer”, based on a photo by Ansel Adams? Better known for his iconic shots of the American West, this curiously small, intimate, domestic picture is a classic. 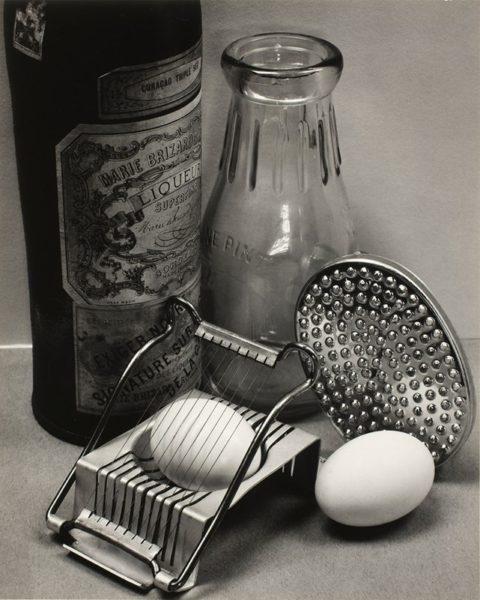 Melt the butter in a microwave, but do not allow to brown. Add a dash of mixed spices and sherry. In a bowl, microwave the malt with the salt to boiling point. Slide the eggs into the hot liquid, cover with a paper plate or glass bowl and cook in the microwave as desired (see below).

While the eggs are cooking, make two pieces of toast. Spread part of the butter-spice mix over the toast.

Serve the eggs on the toast, and pour over the rest of the butter-spice mix. Add a dash of paprika.

Note on microwave cooking I like my eggs poached soft. I find that one egg in the hot ale or malt takes about one minute to cook, two eggs about two minutes, etc, all the way up to eight eggs about eight minutes.