The Hunt For Red Wattle

Not an historic threat from the Communist Russia era — with a valiant Sean Connery attempting to save the brave, down-trodden wattles from the predatory jaws of the evil Kremlin or the Red Army — but rather, less colourfully, just one more simple, sad, tale of a US heritage breed, under huge threat of extinction because of the twin pressures of (a) 20th Century homogenisation of pig herds alongside (b) the requirement for a much faster ‘time to market’ food production chain. 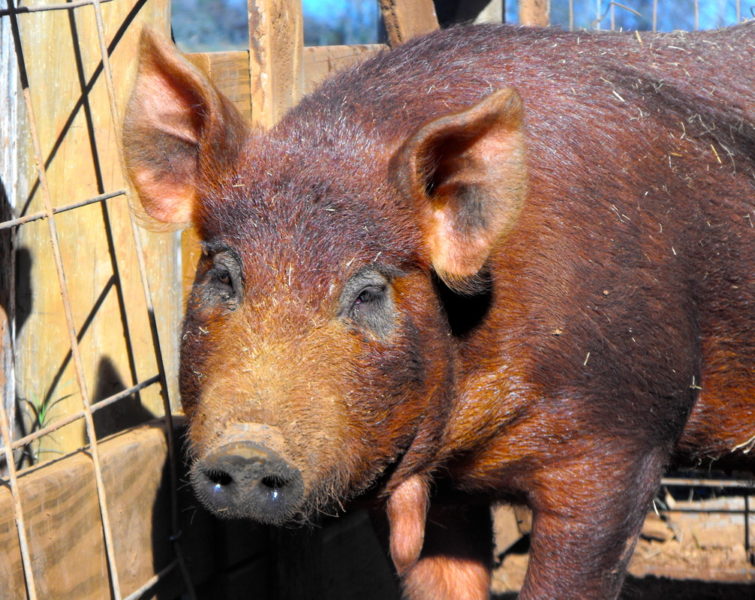 As you can see, they’re a beautiful red colour — reminiscent in tone and shade of the glorious English Tamworth — with those distinctive fleshy wattles hanging from each side of the neck (which have no known practical function and no one is quite sure why they’re still retained) but as a dominant characteristic of the breed, the single-gene survives to be passed on, even through cross-breeding programmes.The ancestor of the Red Wattle breed was believed to have come to New Orleans in the late 1700s, via the French, who’d brought it with them from New Caledonia, a French territory in the South Pacific although more recent research appears to point the finger, again, at those damn Spanish.

The current version — certainly as it appears today — actually isn’t very old. It came into being in the early 1970s; derived from the cinnamon coloured, wattled, feral hogs that were to be found running around in the wooded areas of eastern Texas. Eagerly seized upon by an H.C. Wengler, who was attempting to replicate the pigs he’d known when young, who proceeded to breed two of these sows with his Duroc boar and then bred the wattled offspring back to the original sow. Over several generations he thus developed what became to be known as the “Wengler Red Waddle Hog.” Later, in the early 1980s, another local farmer, Robert Prentice, located a similar herd of red wattled hogs. His line became known as the “Timberline”, named after that same wooded region and combined with the Wengler Red Waddles they created the “Endow Farm Wattle Hogs”.

Up until the late 1980s the breed had been doing well; it had quickly become popular with breeders as a hardy animal that, thanks partly to its Duroc ancestor, when crossed, resulted in a strong, vigorous, lean cross-breed. But the population had pretty much peaked; the American Livestock Breeds Conservancy census of 1990 reported only 272 purebred registered offspring and by 1999 when another breeder, Jerry Russell, started a count, he found even fewer — 42 breeding animals belonging to six breeders.

None of the three registries had registered stock in years and the animal is now another member of the critically endangered band flagged by the along with the others I’ve mentioned before, the Chocataw, Mulefoot and Ossabaw. In 2000, the ALCB (now known as the Livestock Conservancy) was tasked with creating one, unified, breed registry for the Red Wattle Hog. Only three hogs were registered in the first year, but the next year 90 hogs and three breeders were represented and a breed association was created. By 2008, 111 breeding stock hogs had been registered and 56 breeders were part of the Red Wattle Hog Association. The latter’s latest report on numbers is showing a small year-on-year increase for the females: male hogs registered in 2013 were 94 and females were 186 whilst males in 2014 totalled 92 with 205 females.

The story of the Red Wattle breed is a perfect illustration of the problems associated with conservation attempts of both regional and local populations, in the US and further afield. Often these populations are poorly documented — even when common — and they can rapidly disappear, almost sight unseen, when no formal network exists to conserve and promote a breed. It also goes to highlight the importance of them being seen as a commercially valuable product. If chefs, cooks, shoppers, are willing to ask for — and pay a premium for — this meat, then the breeders are encouraged to carry on looking after their pigs and thus grow the herd sizes.

These two shots come courtesy of Cochon555; an American organisation. In their own words:

Created in 2008 in response to the lack of education around heritage breed pigs, Cochon555 is a nose-to-tail culinary event dedicated to supporting family farmers and educating buyers about the agricultural importance of eating heritage breed pigs, some of which are on critical watch lists. The meat they produce is recognized for its superior flavor, texture, appearance, and nutritious qualities. At all events, we source only the highest quality ingredients and products.

At any given event, over a hundred-plus cooks, chefs, restaurant and bar owners, renowned sommeliers and barkeeps, can be found working in concert to create luxurious moments. We work with every type of restaurant and bar imaginable – from farm-to-table to Michelin star – and all participating chefs share one core value: they source products responsibly. If you like tasty pig, our goal is to buy the “best breeds” from farmers doing it the “right way”. 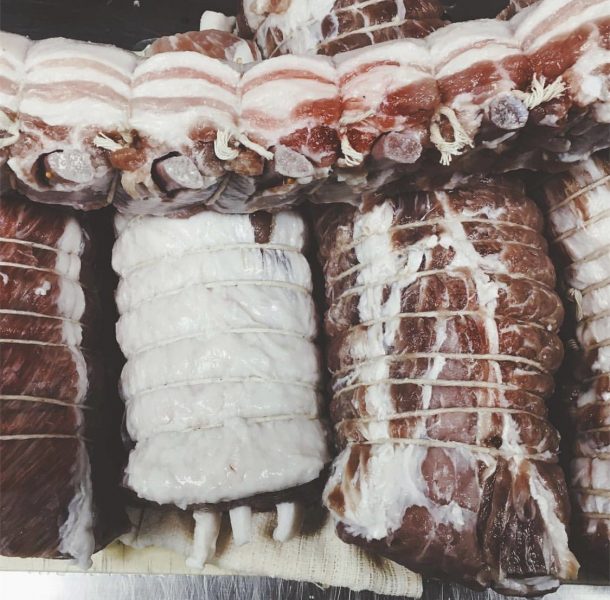 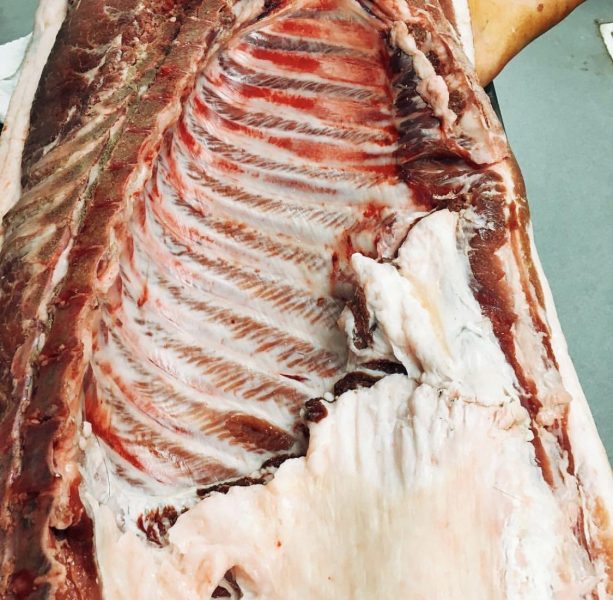 And two last graphics for today. The first is an old piece: I love the contrast between the glistening innards, newly scooped from inside the carcase set against the softness shown in the brushwork of the trees, way back in the distance. 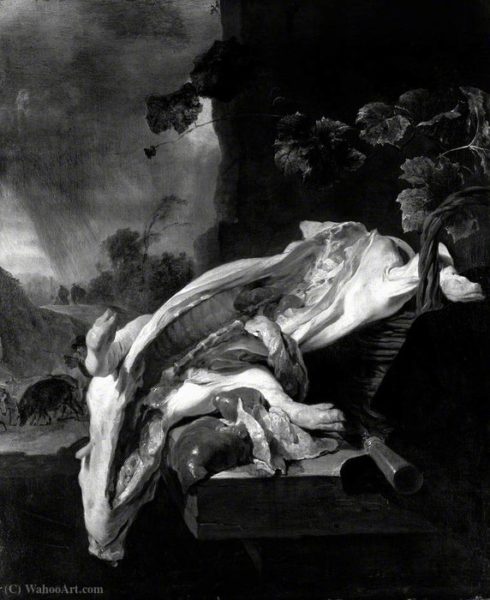 whilst this rather charming second piece came to us as a card via a good friend; the work produced by Anna Wright: