I came across this description of wattles — whilst researching the American Red Wattle pig — in Janet Vorwald Dohner’s 2001, “The Encyclopedia of Historic and Endangered Livestock and Poultry Breeds” and saw the first reference to this extinct pig there:

Other pig breeds also have wattles, which are controlled by a single gene. In Britain the original Gloucestershire pig and an extinct breed called the Irish Greyhound also carried wattles. There are also some Chinese pigs with wattles. Without DNA testing, the genetic history of the Red Wattle will probably not be unraveled.

Pigs (or rather, more accurately, their forerunners, the wild boar) appear to have been eaten in Ireland since they — and other flora and fauna —  crossed over the land bridge that once connected Ireland and England and which existed until around 12,000 BP. There are the remains of their bones dating back to around 9,000 BP (along with the oldest extant field system in the world) and they became a mainstay of the poor Irish persons diet until the 18th century, when extensive deforestation removed the wild pigs natural habitat.

The 12th century historian, Gerald of Wales — who had accompanied Henry II in the course of his invasion of Ireland in 1171 — wrote in his “Topography of Ireland”, on how common was the keeping of pigs in Ireland:

“In no part of the world are such vast herds of boars and wild pigs to be found,” he wrote and, obviously unimpressed by the greyhound pig, he described it as “a small, ill-shaped and cowardly breed, no less degenerate in boldness and ferocity than in their shape and size.”

Looking at this picture of how they appeared, you can’t really argue with his summary… 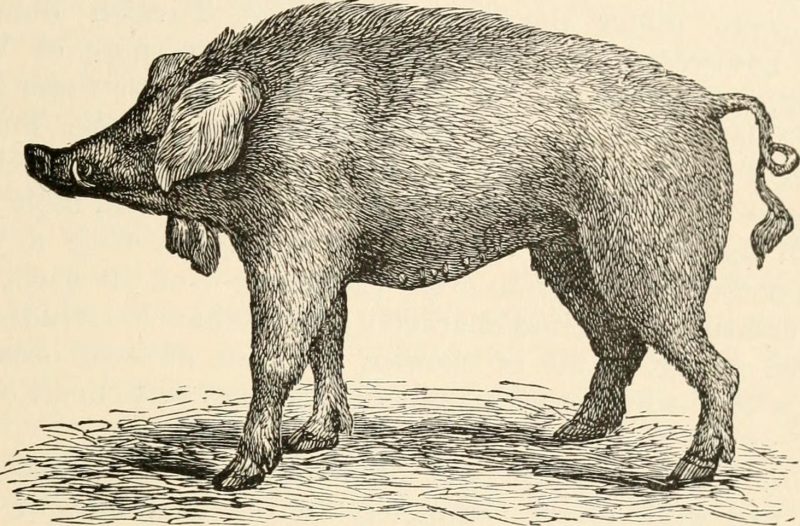 And over 500 years later, the number of pigs in Ireland would continue to surprise observers. In 1780, one person commented “hogs are kept in such numbers that the little towns and villages swarm with them.” It reminds me of the tales of the urban pigs in London.

Talking (as we were earlier, of things wattle), here’s fascinating description of them, by none other than Charles Darwin, from his 1868, “The variation of animals and plants under domestication”: 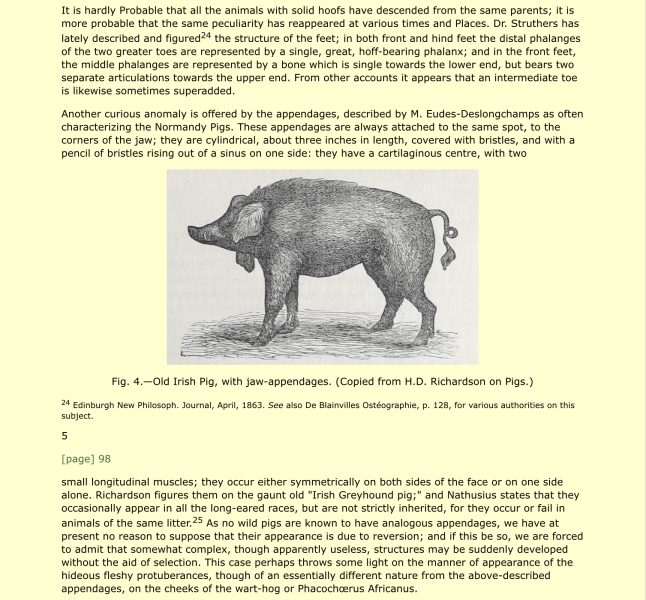 And finally, from a fascinating oral history of Ireland, conducted at the end of the 20th Century, where this great description was given about how their pig was used. It’s no different to the la matanza festival conducted in small Spanish villages…

Pigs were routinely kept in even the smallest of farms. A few would be kept for the family’s own use with others reared and sold on. There would normally be two kills on the farm per year, one in April and one in October.

To begin the home slaughter of pigs, a tub of brine was prepared and covered. The pigs would be killed on site by the man of the house, with blood drained into an enamel dish for his wife to make blood pudding (she would also take the intestine, which was rinsed out to hold the pudding). Entrails were removed and the liver and kidneys would be saved. The head would be removed and boiled for hours to salvage whatever was possible. Salt was fundamental to the curing of pork, not only to preserve the meat but to eliminate pathogens. Split down the middle, the sides of the pig would be set on a bench and handfuls of salt rubbed in, first on the flesh side and then the skin side. Often, two people would be involved, and hours would be spent ensuring the sides were thoroughly salted – around 4lbs of salt for each flank. Laid then on the floor, skin-side down, often on a bed of straw, sacking or jute would then be thrown over and, after a few days, the salt would be further trampled in by men standing on the jute. Hung up on hooks with sacking over, portions were cut off as required. Pork/bacon could also be smoked in the chimney. Hanging sides of pork would be wrapped in muslin to keep off flies.

When the pig was stunned and the throat slit, an enamel basin or bucket was used to catch the blood drained from the pig. Salt was added to prevent coagulation. Intestines were washed in running water. Oatmeal was mixed in, along with some herbs and spices, salt and pepper. Sometimes using a funnel, the mixture was then fed into the intestine, cut and tied at lengths of a foot, put on a tray and steamed over hot water for several hours. The lengths of pudding were then left out into the ‘dairy’ or outhouse and sliced off for frying at suppertime as required.

The Irish Greyhound pig went the way of so many similar breeds around the world. Unmourned, pretty much and, I’d hazard a guess, not one that would really tempt the farmers or cooks of today, but still, a distant reminder of when variety in the food system was a good thing…