The life (& possible premature death) of the Country Ham

Traditionally — all over the world — pigs would be killed in the cold months, to ensure that the meat wouldn’t spoil. You’d eat the most perishable parts inc. the offal which I’ve written about before, and after that, you could look to make the joints remaining, into age-cured delights, common in so many countries. Think of the Spanish pata negra, the Italian prosciutto, the Jambon de Bayonne from Gascony and these ones here — emanating from China — that sound fascinating.

And of course, America. And their own dry-cured “country ham”. 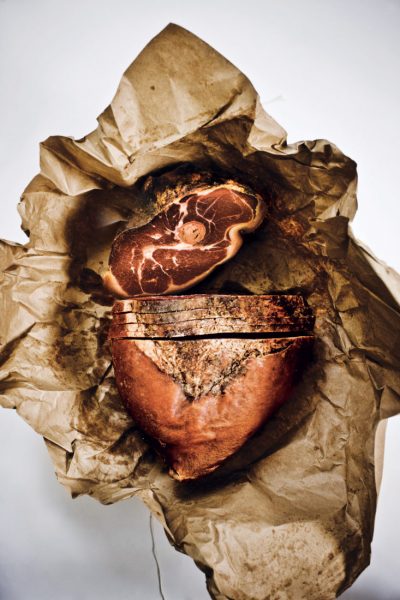 I’ve covered before this particular delight. The meat that results from the process is nutty sweet, it’s smoky, and, like the others mentioned above, deeply complex. In the book “Country Ham: A Southern Tradition of Hogs, Salt & Smoke” by Steve Coomes, it’s been nicknamed “hillbilly prosciutto”. Coming from the (cooler) southern latitudes of Kentucky, the Carolinas, Tennessee, Virginia and West Virginia, just 2.5 million country hams are produced each year, a vanishingly small percentage of the 23 billion hams sold, in total. And those others, rightfully disdainfully called “city hams“, are most often just brined, boiled or sugar glazed. The good stuff is insanely addictive, so much so, that in an episode of “Mind of a Chef“, Southern-food evangelist Sean Brock showed himself to be so enamoured of a long-cut country ham, that he almost started to fondle it.

“I have this weird thing where everything is my ‘favourite,’” he admits, arm laid gently on the exposed shank, “but this I’ve used as a pillow before.”

Some of the premium heritage breed hams can cost up to $350 each; such as the 18-month-old “Surryano” hams from the town of Surry, in Virginia — whose provenance is of Berkshire, of Tamworth and of Red Wattle breeds — although even that price is a steal, compared to the $1,500+ that you’ll need to hand over to purchase a genuine Spanish Iberico. Curiously, whilst the U.S. Dept. of Agriculture deems imported prosciutto to be safe to eat uncooked (as you can — and indeed should — choose to eat from a good country ham), yet their technical and regulatory stance means that country ham can’t actually (yet) be advertised in that manner.

So, as is appropriate, let’s start the process off in those winter months. Firstly, make up a salt-based cure, adding in some brown sugar, red  pepper and black pepper to balance the salt. Whilst not canonical, you could supplement it with some sodium nitrate — a preservative — such as Prague Powder #2. Suitably ‘attired’ in this cure, these “green” hams — so called because of their youth, and not the colour (if they’re really green, you’ve done something wrong) — then are allowed, indeed, expected, to do nothing else, except sit around, wrapped in cotton bags (to ward off any threat from insect larvae) or stacked on shelves or in boxes, for one to two months at around 5ºC. 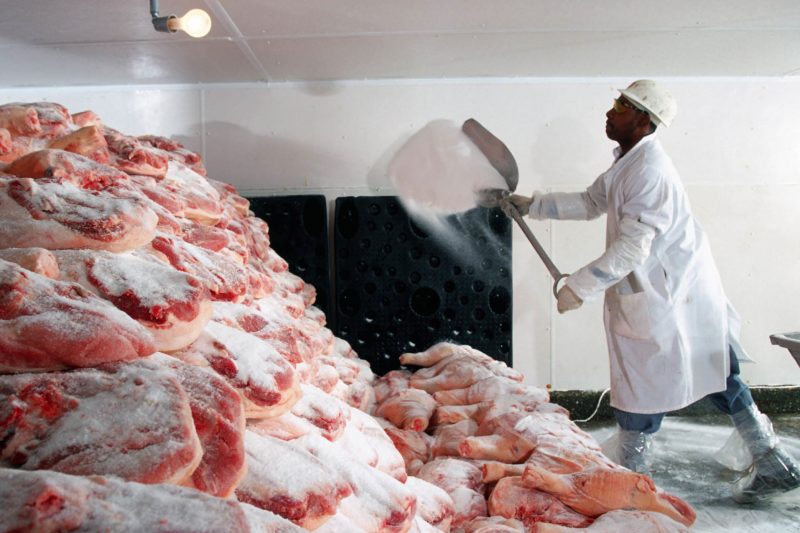 And so, to the Spring season, whose warmer temperatures help the cure percolate uniformly through the meat, in a process that can take maybe another month. Then, you’ll wash the salt off the hams, hang them on racks off the ground, and push the temperature up another couple of degrees or so, to around 10ºC. And now, you have to make the decision — to smoke, or not to smoke? In Virginia, they smoke, whilst the good ‘ole boys of North Carolina, will choose not to. And in Kentucky? As Route 75 does, the state is equally split down the middle on that question. But if you’re going to choose to, then you have to build a cool, slow smoke. And leave it, above the smouldering wood. And to know when it’s reached its peak smoke-point? Take a look at the photo above — that mahogany shades means it’s done.

And finally, the summer months: sitting at between 30º & 32º C., the hams will then ‘sweat out’ the rest of the remaining moisture that the cure hasn’t already seen to. This part of the process has been compared to “reducing a sauce to get more flavour”. And what then? Yes, you guessed it, yet more time, just hanging around. The traditional country hams probably need another 5-6 months to take them to ‘maturity’ at around the ten to twelve month point — counted from when they were still part of the pig — whilst the drier, prosciutto-style hams can carry on ageing for another two years or more. This is not in anyway, shape or form, fast food… 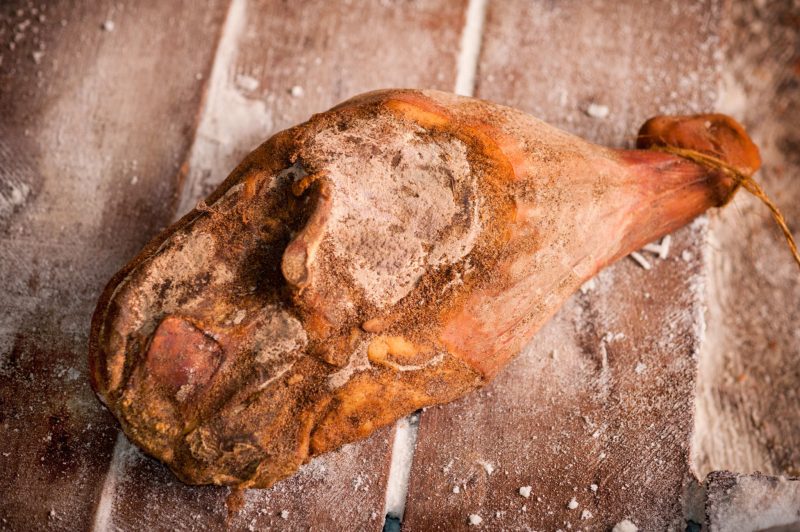 Which means that, unlike say in Spain, where there are probably more smokehouses than you can shake a whole forest of sticks at, in the US, they’re home to only around 20 dry-cure specialist operations, the loss of the last smokehouse actually situated in the town of Smithfield, is a real blow to the country ham industry. Smithfield ham, which — according to legend anyway — was all that kept the soldiers from burning down the town during their Revolutionary and Civil wars — is therefore no longer able to be produced (as the regulations mandate any hams labelled as “Smithfield”, must be “aged for a minimum period of six months … within the corporate limits of the town of Smithfield”). The older generation of producers is retiring, there’s been natural disasters that have caused others to burn down or even get destroyed by a tornado. And the Smithfield one was owned by yet another predatory, Chinese multi-conglomerate. So they didn’t care. And the pricing model isn’t good at all…

So, is that the end of country hams in the US? Maybe not; there’s still hope that production will recover (as this article suggests) in these encouraging words from (the cited earlier), Steve Coomes:

“If the old guard doesn’t, trust me, somebody will step up and fill the need.” He points to Facebook curing groups and DIY ham-makers. It reminds him, he says, of the home-brewing communities of the ’80s that helped jump-start the craft-beer revolution: “It could be microprocessors doing only a few hundred hams per year,” he surmises, “but if the number gets high enough, the mind-set will change, and people will scale their operation up.”

Cross your digits. Buy more of it. Shout out about it. Encourage the small, specialist, enthusiast producers. Just as you have to do for those heritage breeds, that I keep banging on about. Go on, you know it makes sense.