The pig. From the underworld.

Science aside (a previous post casting adrift the notion that there really was a hell-pig in pre-history), there’s this tale. Far more evanescent maybe, but …

From The Mabinogion, (in a new translation by Sioned Davies) comes this hint that maybe The Welsh pig is the oldest pig in the kingdom?

Lord,’ said Gwydion, ‘I hear that some kind of creatures that have never been in this island before have arrived in the South.’
‘What are they called?’ said Math.
‘Hobeu, lord.’
‘What sort of animals are they?’
‘Small animals whose flesh is better than beef. They are small, and their name varies. They are called moch now.’
‘Who owns them?’
‘Pryderi son of Pwyll-they were sent to him from Aawfn by Arawn, king of Annwfn.’ 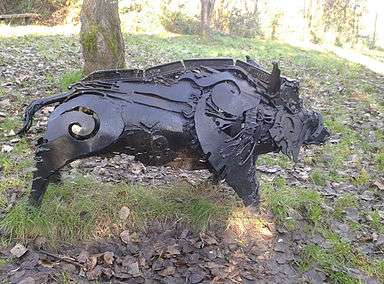 A good friend, lltud Llyr Dunsford, of Charcutier Ltd in Llanelli, describes the story as follows:

Nearby Penymynydd (which literally translates as The Top of the Mountain) above the village of Trimsaran lies the spot that is reputedly the site of the entrance to Annwfn (The Underworld) in the legends of the Mabinogion.

What makes for an even better story is the legend of the Twrch Trwyth, which recounts the hunt of an ‘enchanted wild boar’. Part of the story mentions ‘Coed y Glyn’ (Woods of the Glen). Now, we can’t be sure which Coed y Glyn it refers to. I like to think that as we’re in the shadow of Annwfn and as we’re part of the Glyn Estate, with a large swathe of woods that have been known as Coed y Glyn for centuries, that there’s a distinct possibility that the woods that our pigs reside in could have been at one time home to another mythical animal!