Where do you run to when you’ve been run out of town? Out of your country, out of your old life?

But where then do you hope to feel the prickings, that stilling around you, the realisation that this, this one place could be that new home, what are the signs that maybe you can stop running, having reached that place where you can draw breath, find a grounding, a settling, as roots sinking into a new bed of earth.

My name’s Kenji and I’d accidentally poisoned my boss, with the blowfish that was my speciality and his regular favourite meal. And it was an accident. No cliché me, as I had no ill-will towards Miura-san. Not at all, I was his personal chef and he was a good boss, thoughtful, generous, kind even. That he was senior Yakuza however, complicated things. A lot. In the old days, legend had it, any chef who managed to kill a customer like this was obliged to disembowel himself with his own knife. I certainly wasn’t going to do that. But maybe I wouldn’t need to; his colleagues would, when they found me, have some — no doubt innovative and painful — ways to show me the errors in my work ethic.

No helpful family, no friends to speak of, so of course I ran, my tattoos an obvious flag to anyone looking. At first inside Japan, then abroad as I found nowhere that felt safe. Oh, and did I mention that I’d stolen from Miura-san as well? Only after he was dead of course. I’m not an animal. You may know already that there’s no cure for fugu poisoning, so there was really no point me calling anyone for help. And, just 35 minutes after we both — nearly simultaneously — realised how badly I’d fucked up, he was dead.

So, what’s a man to do? Well, in this case, this man, what better than to empty Miura-san’s safe. Key from his pocket, warm thumb print still working, it opened. Enough thick, banded bundles of yen, dollars and euros to keep a frugal man alive for years. For Miura-san, it was pissant stuff, just a little ‘walking around’ money. For me, it was a fortune and my only chance that I’d still be alive in a year or so. So I ran. And kept running, for the next 5 years.

“And that Jeff, is how I wound up here”…

Here was a little seaside town on the east coast of England. More specifically, here was the restaurant at the end of the pier where I’d been coming now to eat, week after week. I’d left a job in London, working as a key-cutter in a little shop in Acton, for here. I’d heard it described as “an oasis of calm. With great fish” by a customer chatting to a friend. The next day I’d packed my few clothes, and a short train ride later, was in Deal. For some reason, this place, so unlike the gomi on gomi density of Osaka that I’d loved, was balm for my soul. Maybe it was the sea. Maybe the ozone air. Maybe the fresh fish even… Whatever it was that had snagged my attention, I’m glad it had. For the moment, I was content. Even allowed myself to relax, feel more safe. Illusory I know but would you have been any different? I don’t think so. Even so, I continued to think it prudent to cover my arms with long sleeves, even in the hot sun.

I’d lucked into part-time work at a little fruit machine place kitty-cornered to the pier entrance, right on the sea-front. It’s funny, it was the nearest thing to a pachinko parlour that I’d found. The others working there were simple souls. Not smart but easy enough to rub along with. None of them any trouble, even little Fred who’d called me “that bloody Chink” — showing a lamentable grasp of both geography and tact — wasn’t a problem after I’d sworn, viciously, fluently and indicated that I’d also be extremely happy to throw him off the nearest cliff if he ever said anything like that again.

It’d been a few weeks living in Deal before, one afternoon, at shift end, I’d found that I’d wandered all the way to end of the pier and stepped inside the little restaurant for the first time. The owner had been kind. He knew a few words of Japanese, bowed and welcomed me in, “irasshaimase”, which had me smiling in wry recognition of my past life. He’d asked what I might like to eat, followed by a chuckle from him as I’d said “omakase chef”. So, “chef’s choice” then. What I got was a fish finger sandwich. Three words that do scant justice to what Jeff put down in front of me, about 10 minutes later. Just pure genius. It was easily the best thing I’d ever eaten. Anywhere. Ever.

So, once a week, every week, I’d come here, have the same sandwich, seat myself at one of the large windows and look out to The East. Towards the rising sun. Waiting, I think for redemption. The wooden beams, roofing the place like leviathan ribs, made me think of old Western writings. Am I Ishmael then or a Queequeg character? Certainly the body ink I have would endear me to the latter. But I’m the refugee, the exile as well.

Slowly, I found myself doing more work there, less and less at the arcade; Jeff, one afternoon having decided he wanted to fish from the beach, on the way out, handing me a clean apron & his knife roll asking me to “cover whilst I’m out” followed by “it’s a quiet time and anyway, I trust you”. Back behind a counter, serving food. Strange. I thought that particular itch scratched, long gone but now, funayuki close-fitting my hand, it was all I wanted to do again. 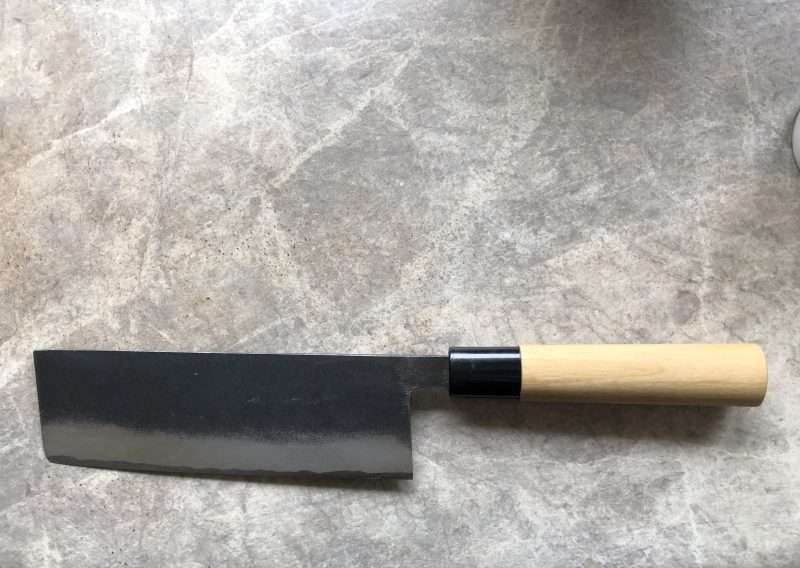 That was 5 years ago. Since then, I’ve been cooking alongside him. We are twins by different mothers; he, my height but fair, comic-book handsome, with me, squat, dark browed, toad-like but from the first day we worked side by side, almost literally joined at the hip. We often don’t speak very much when busy, just a quick glance to check what the other needs, a nod toward a pot that’s close to over-topping, a smile as an ingredient arrives, fully prepped under the others’ hand, just in time for its addition to a dish.

Endless sandwiches. What he (no, we now) are known for. A road paved with them, stretching back into his past and forward into our futures. It took me some to realise that this road was also my path to a redemption — if that was needed still. My cooking, the salve, the solution. That after all was why Jeff had taken me on; it just took me, Mr Unaware, some time to realise. I’d told him my full story a year or two after we became colleagues, then a few years later, when we’d become friends, he, in turn, entrusted me with his. You’ll need to ask someone else about the details though as I won’t speak of it, at least on these pages except to say he’s The Keeper

Who can now go home, confident, reassured that I’ll never make a life rupturing mistake again. Those ingredients (my ingredients now) are in love with each other. And the world. I have a home again. I have that anchor. I am now that life-saving drogue, like him. I have his set of keys. His knives. His restaurant. And a curiously coloured shell. There’s a whole story about that shell, but that’s also for another time, for another person to tell.

Did I mention my ink? I know I have. You couldn’t miss it all, distinctive, swirling bands of colour, intricate designs, a neon spotlight for my searchers.

“No. No, you won’t. Look in the mirror.” Glancing sideways as he suggested, I saw my face, my arms, clearing, the shapes, the designs fading, wisps blowing away like dawn mist over the sea, until my skin was birth naked again. Then, more preternatural still, facial contours blurring, running, colours in flux, until, new-born, resurrection man, stood there, shyly smiling back at me. Kind of Jeff, but not Jeff. The new keeper. The new sandwich man.

“The Japanese guy? Kenji wasn’t it? Looks a bit like you two, eh? Hahahaha. No offence like. Anyway, no idea though mate, sorry. He left”.