Nu hit ys on swines dome, cwæð se ceorl sæt on eoferes hricge.
“It’s up to the pig now, said the man sat on the boar’s back.”

An interesting saying, if more than a little cryptic. But it isn’t really, is it? “Up to the pig” that is.

I give you fair warning that this is another two-parter so please bear with me. It’s on a subject that’s both close to my passions and heart and also one that I believe is vital for us humans to get right. I’ve talked before about the “The Pig Idea”. Take another read now and then come back here?

One of the planks in that campaign encourages the re-starting of the old swill feeding system (banned back in 2002) for pigs and is backed by some of the glitterati of the cooking and food worlds inc. Yotam Ottolenghi and Hugh Fearnley-Whittingstall.

It’s a subject that probably quite needs that reflected gloss, as swill isn’t the most attractive of words that could be used in the lexicon of recipes or one to immediately conjure up visions of beautiful and tasty food dishes, bulging with pork goodness and flavours.

But it’s also a serious and increasingly urgent subject as the problems that it throws up are ones that need wider discussion and agreement on a possible solution and then a resolve to fix them — and hell, if it’s important enough for Lord Gnome’s team to write about, then it’s sure as hell good enough for me to write about (again). 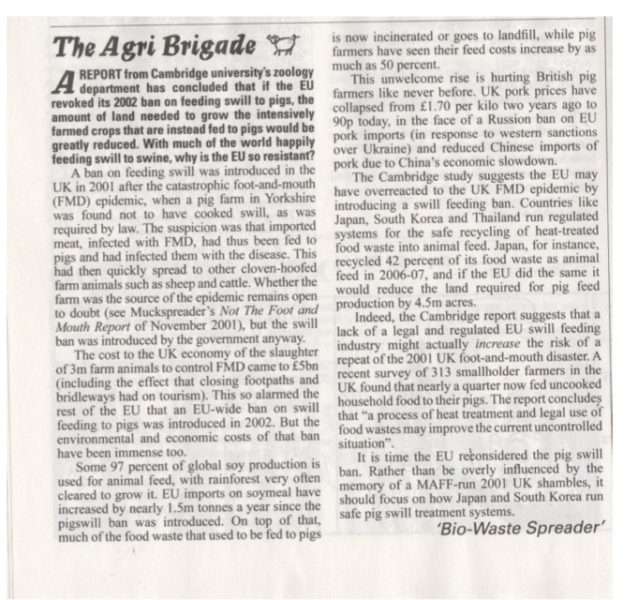 Reading this recent piece, it’s even more apparent now that the rushed decision at the time to (a) blame the outbreak of foot & mouth on the use of un-cooked swill at one farm and (b) to then ban any use of this great food source across the entire EU was a typically wrong-headed, poorly researched, knee-jerk reaction and another classic example of the “something must be done; this is something” approach to ‘government’ that has blighted so many industries and areas over the years. 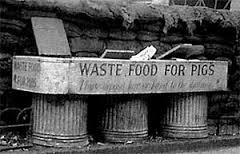 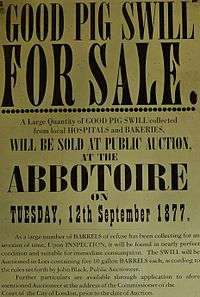 Japan and South Korea — amongst others — both run safe, effective pig swill treatment systems. If the EU were to do the same, it could take around 4.5 million acres of currently strip-cleared rain-forest land out of the hugely damaging “grow soy as pig-food” production business improving and retaining the vital habitat there, reduce by leaps & bounds the amount of land-fill that is needed to, literally, cover-up food waste (or stop it being pollutingly incinerated as the other method) whilst at the same time, saving farmers vast sums on their always increasing feed bills.

Yes, you guessed it: It’s another one of those virtuous circles that worked for hundreds of years, has been broken and now needs urgently mending. But it isn’t just agreeing to start using swill again — that’s a part of it, an important part, but still only part of a much wider whole.

Factory farming, another huge blot on the escutcheon of humanity, is driven by a relentless push by the big supermarkets to reduce prices, day in, day out, in turn driven by their insane belief that “this is what the customer wants“. It may be what their short-termist shareholders and hedge-fund owners want but it’s not what most consumers want.

The majority of farmers are thus forced by these self-same supermarkets into a relentless, dangerous “race to the bottom”; being paid less and less whilst simultaneously being expected to produce more and more, often to quite frankly bizarre specifications that are only actually wanted in the head of the moronic marketeers who think that mis-shapen or irregularly coloured means “danger, danger Will Robinson” and thus make such non-compliant items unsellable to your average shopper. [They may be right that people often choose now not to buy such items, but that’s mainly the result of years of marketing indoctrination, rather than any real deep-seated aversion to knobbly fruit or veg. I’m pretty sure your parents and even more, your grandparents, would have looked askance at such rank stupidity. “It’s the flavour, stupid” they’d shout!]

[Whilst likely still only worrying about their bottom line rather than as a moral — or common-sense — stance, French supermarket chain Intermarché ran a campaign mocking the unwillingness to buy & use “ugly” food — all credit to them]

Farmers are daily being forced out of business, some committing suicide or leaving the industry — and the only apparent winners here are the supermarkets and the huge agri-combines who buy up the land at rock-bottom prices. These latter aren’t farmers in any meaningful sense, they’re just pillagers of resources and land which also happen to churn out food in their onward march to reduce everything to a “product” for their P&L accounts.

Most farmers care deeply for their animals and their produce and this concern would (and did) naturally translate into good quality food produced in humane conditions were it not for their current neu-feudalist style indenturing to the Supermarket Gods. And most shoppers can and do willingly pay more for good food — good in the sense of humanely, ethically produced food, where the cost charged to the shopper (you!) allows for a reasonable, sensible, non-slave labour, return to the farmer or producer.

So, what can I, you and everyone else do to stop this rot spreading?

For one thing, wean yourself off your need to shop at the supermarkets — but more than that, when you change your buying habits, tell them directly why you’re not using them anymore. They’re not part of the community — their profits leave the area faster than a burger slides off my plate, heading to off-shore, tax-havened owners.

Instead of solely using the supermarket, make far greater use of your local shops & suppliers. And yes, I accept that lots of you already do this. But even more of you don’t. This isn’t just some middle-class, liberal fantasy that actually only really works in Shoreditch or Hampstead Garden Suburbs; this is possible pretty much everywhere. And by local, I mean anywhere within a 25-mile radius of your home. Outside that range and it starts becoming a bit of a nightmare, attempting to justify the resultant larger carbon-footprint that everyone then starts stomping into the face of the planet 🙂 [Not surprisingly as they have some of the largest factory farms in the world, the US has a slightly more lenient definition of ‘local”. In their 2008 Farm Act, ‘local’ means anywhere within 400 miles. Riiiiiight America.]

Buying locally means you can ask about provenance — not just some poncey, Radio 4 obsessed foodie idea but actually knowing how the food was grown and the animals looked after — which means that you become part of the food-chain, influence the food-chain rather than being a passive consumer, sold to.

And because this is a local supplier, some one who may even live just down the road it thus helps keep the profits in the community, allowing these small, enthusiastic farmers and growers to get a decent return on their work rather than continually fighting to reduce their costs at the behest of the supermarket behemoths. Behemoths? No, better calling them dinosaurs. Then we can work on our own version of the planet changing K-T extinction event.

But you don’t think this is possible? OK, let’s look at some of the resources out there that’ll help you in this modern-day quest. For indeed, a quest it is [we’ll look at what the Holy Grail that results at the end might be, in a future piece…]

Think about the scary statistic* that approx. 1/3rd of all the food grown — over the entire planet — never gets eaten. That’s 1.3billion tonnes rotting in on the ground, in bins, rubbish tips and landfill, spewing out yet more of the climate altering greenhouse gas, methane.

“The path from farm to fork is broken”

And that’s why you and me — and also some interesting start-ups & more mature organisations — can and should look at starting to reduce this number. Co-incidentally, this month’s edition of Wired magazine is based around food & technology and the future, so I’ve used some of that as part of this piece.

Remember that old phrase “think globally, act locally”? I hadn’t realised quite how long ago this was being used; it was actually coined in 1915 by a Scottish architect, Patrick Geddes, and a hundred years on it’s, if anything, even more applicable.

Also co-incidentally, Olio, launched in London in 2014 and featured in this (UK only version) Wired article, finally expanded their reach outside the confines of The Smoke and have headed out to all points of the compass, including my neck of the woods where I’m one of the local ambassadors. Their mission? “…to unlock the value of food that is wasted in the home and community.” So, download the app, sign up and start sharing and save local food (truly local i.e. to and from your neighbours) from being wasted.

I think that’s enough for this half of the piece don’t you?

The second half will be a resource packed, dense over-view of as many of the excellent extant initiatives to reduce waste, improve the living conditions of both animal and farmer and generally make sure there’s more food that you can feel safe eating as I can find.

Oh. Wait. Just before you go? There’s a non-Jobsian “one last thing” as this site is also about some of what I see and do and think about and plan as part of the Salute The Pig project:

Thanks to Tom Adams, chef extraordinaire, fellow pig-lover and co-founder of the always amazing Pitt Cue (NOTE: due to re-open this month — Feb ’16 — close to The Gherkhin, their new replacement for the old place in Soho), I am now the proud owner of one of the very few, signed, original prints produced by the talented Ian McDonnell (and hand-delivered to our door by the very kind and equally talented, Adam Bridgland of Jealous Print Studio) that formerly adorned the main wall in their Soho operation. I shall have to go along when they re-open to see whether they retained it in the new place. And to see what fresh magic they have on their menu. 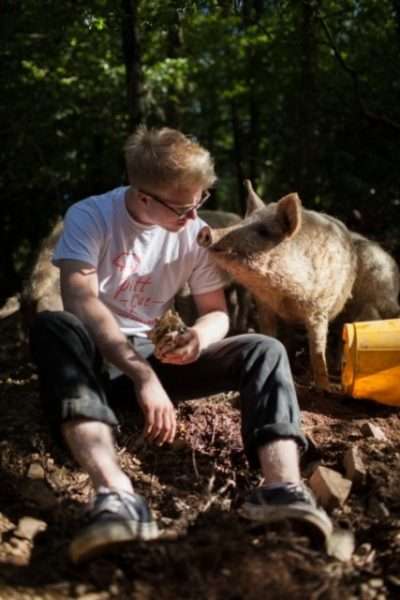 There’s a shot of the Pitt Cue one, in-situ, from an earlier post on our visit, available here.

My copy is yet to be unwrapped, let alone framed & hung and currently sits beside my desk in a huge protective tube, so, for the moment, here’s one of Ian’s other, smaller (the one I have is about 5′ wide!) pieces to give you an idea. 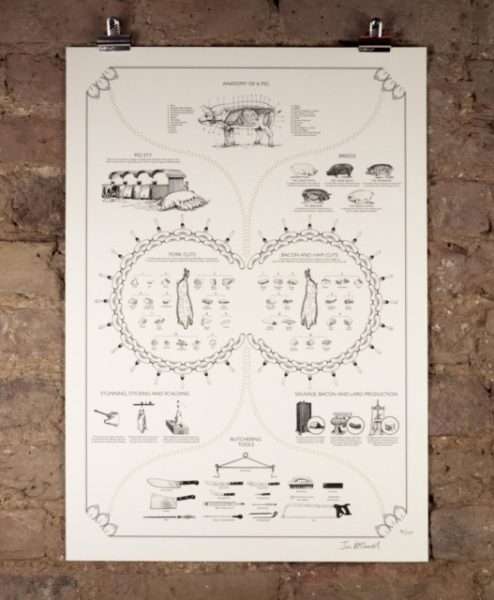 And lastly, lastly I’m wondering if there’s room to put up something like this in our (quite small and already quite crammed) kitchen…

Knives on a wall

OK, that’s it for today. More in Part Two.