TIL there have been 𝘵𝘩𝘳𝘦𝘦 Pig Wars…

I suppose we’ve fought battles over pretty much every damn thing possible, every type of resource, every insult or slight — real or imagined — to one’s ‘honour’ or religion or some other such (99% male produced) bollocks, against every ‘inferior’ group that needed putting in their place (often because they’re (un)fortunate enough to be sitting near to or over the aforementioned coveted resources), so after all, why shouldn’t pigs be the real-life subject (title?) of a conflict?

That there have been three wars of sufficient note to be honoured with their own name did kind of surprise me though. So, with thanks to an old friend (HT to David H. Morton for this pointer), let’s dive onto a small (but interesting) deviation off the main path of pork.

[By the way, this photo is of warring pigs, not a pig war… Just so you know.] 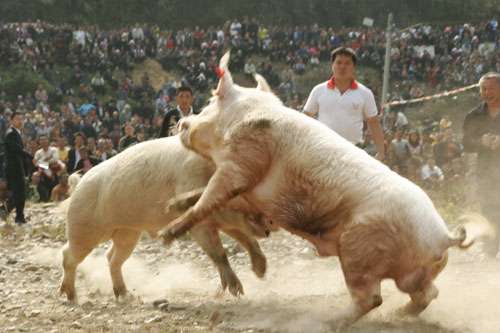 The earliest of the three battles mentioned is the Pig War (or Saukrieg) that lasted from 1555 to 1558, a feud that arose between the new Bishop of Meißen and Hans of Carlowitz, the family of his predecessor in that role. There’s a little bit of necessary background before we get to the nitty gritty of the naming: In 1555 the brother of Hans, Nicolas II of Carlowitz, Bishop of Meißen, died. He was succeeded by Bishop John IX of Haugwitz. The bishop’s inheritance started the dispute as the Carlowitzes took up arms against the new bishop, managing to hunt him out of his residenz at Stolpen. A small, armed group then went on to invade villages around the area, causing not inconsiderable damage, inc. in the process (and here’s the nub of it) driving off 700 pasturing swine.

By 1558, finding nowhere safe to hide on his estate, John fled to Prague. Apparently the dispute was then mediated by the Prince-Elector Augustus and according to the settlement agreed, the bishop had to buy-off Hans von Carlowitz with 4,000 gulden for ‘expenses incurred’. It sounds very much like the Mafia’s approach to neighbourhood watch, four hundred years later: “Nice shop you’ve got there; would be a shame if it burnt down tonight…”.

Next up is the Pig War of 1859, a confrontation between the United States and the British Colony on Vancouver Island. By now, the (recently arrived) Americans and the Brits were fighting over resources — in this case land — having invaded the Americas some 300 years before and, after killing, maiming, raping & pillaging the locals, turned their attention to each other, in a land-grab exercise. This one all kicked off when on June 15, 1859, Lyman Cutlar, an American farmer who had moved onto San Juan Island claiming ‘rights’ to live there, found a large black pig — I’m tempted to think this was a Berkshire of course — rooting around in his garden & having great fun eating his tubers. This wasn’t the first time his potatoes had been food for a neighbours pig, but that day he took aim, shot and killed the pig. Irishman, Charles Griffin, employed by the Hudson’s Bay Company to run their sheep ranch owned the pig and like small-holders the world over, before & since, he found it a good idea to keep a couple of pigs that he (sensibly & traditionally) allowed to roam freely. Friendly relations had reigned until the death of the pig, so Cutlar offered $10 compensation (about $295 in todays’ money) to Griffin; the latter, in apparent high dudgeon, counter-claimed for $100. Cutlar refused — with a possibly apocryphal claims that “it was eating my potatoes” & Griffin replying “It is up to you to keep your potatoes out of my pig.” The British authorities then threatened to arrest Cutlar so the American settlers called for military protection.

After that, it all escalated fast; warships & troops taking up opposing positions. An expanded version of the history explains why this part of the world was being fought over and how this war turned out. tl;dr? Land rights. And no one died…


And finally, the third Pig War — which ran between 1906 and 1908 — the battleground this time being a trade war fought between Austria-Hungary and the Kingdom of Serbia (initially at least) over pork.

At the beginning of the 20th century, Serbia was an economic satellite of the Habsburg Empire whose major export was pork, most of which was bought by the Austro-Hungarian Empire. In the first stirrings of independence, Serbia looked to circumvent this control, by setting up trade links outside the Hapsburg orbit — particularly with Bulgaria and France — beginning to import French munitions in 1904, establishing a customs union with Bulgaria in 1905 & in 1906, ending the sale of tariff-laden Austrian goods inside Serbia. The Hungarians responded that year with sanctions, in April, by closing its borders to Serbian pork. Serbia refusing to bend the knee to Vienna managed to gain substantial inward French investment to build new packing plants for international trade, began to order materials from Austria’s rival, Germany, and pressured the Austrian-administrated provinces of Bosnia and Herzegovina for a trade outlet on the Adriatic Sea. Russia supported Serbia’s actions, and a real shooting war between Austria-Hungary & Russia was averted only because of a German ultimatum in 1909 that demanded (& succeeded) the end of Russian aid to Serbia.

And finally, finally having dove down deep into the dire depths of media depictions of pigs — just so you didn’t have to — I came across the 2008 film “Pig Hunt”

The synopsis is, well, interesting. One for a rainy, winter afternoon (when there’s absolutely nothing else that tempts you) I think… 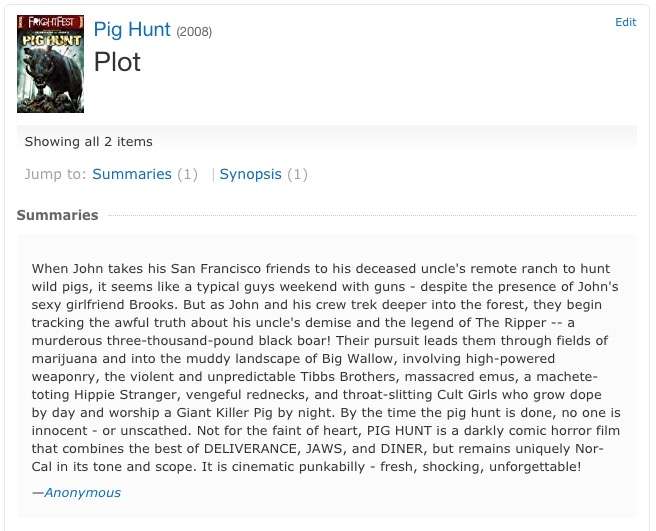