So, to the farm itself. We’d arrived mid-afternoon — on one of the last days of the festival — which meant that it wasn’t the maniacally busy place that the first few days apparently seem to be. Which also allowed us to wander around easily without tripping over underfoot children, domestic pets, competing artists, sun-burnt comatose adults or indeed having to fight for toilet access. We spent a good couple of hours ambling around. I mentioned before that it’s a working farm but the pace today was slow and quiet.

And then to one of the two major things I’d come for (the other being the 3-course meal obviously!).  Val had earlier in the year said the magic words “handmade knives“. That was more than enough to tip the balance for me on whether or not to drive into the depths of the Suffolk countryside for a meal (and an art show).

So off to meet Tobias Ford, sculptor and all-round worker of metal. An example of one of his latest figurative pieces 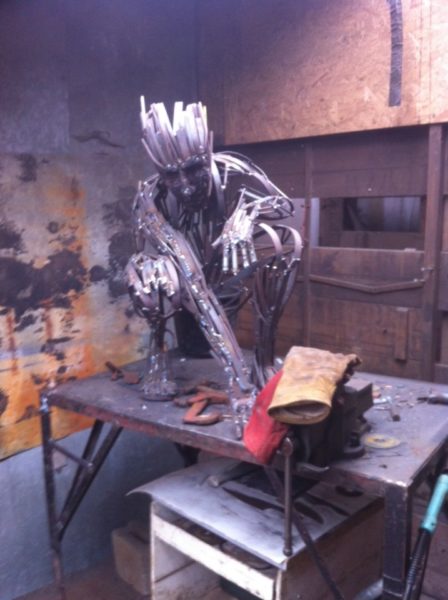 But it’s not his metal people (great though they are) that I came principally to look at. Instead, take a butchers at these lovely items: 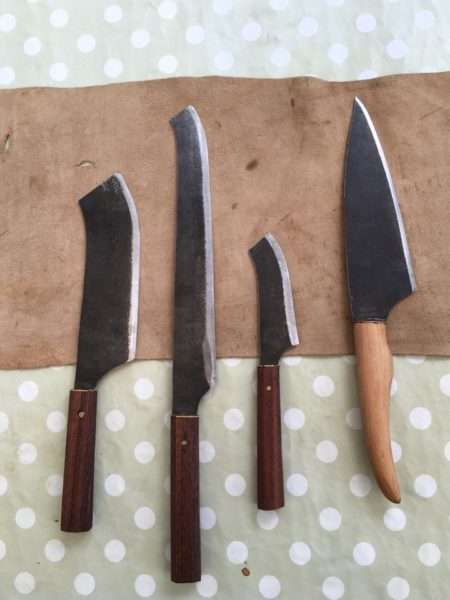 made from reclaimed metal and wood

I was looking the one on the right and about to buy it. Alone. When I found myself strangely tempted by the set on the left (say “hi” Val and Becky for your truly wicked joint sales pitch). So, yes, gentle reader, you’ve guessed it haven’t you? I bought ’em all.

Tobias was scheduled to be there in one of the outbuildings but couldn’t, in the end, appear so I had to email him later to ask about work involved in these knives.

They’re all made from vintage table saw blades. The wood on the set is Sapele pronounced (sa-pee-lee) which was rescued by me from a guitar makers scrap bin.

The other handle is made from Beech reclaimed from an old jewellery bench being thrown out by a local school.

It’s amazing what raw materials you can gain from someone else’s refuse.

I couldn’t be happier with them; they’re wonderfully sharp and just feel so very, very good in the hand.

In one of the old barns (giant, towering, old, old, old, structures, not exactly decaying, they seem to be left in some sort of stasis but also giving the firm impression that they’d survive a nuke going off in the next village) I saw this slightly rusted old work-horse

which I was sorely tempted to fire up but, probably luckily for my protruding body parts, it was un-fueled and so stayed quiescent.

One more “pig” item found in another of the barns was this piece of locally felled ash wood, which the farm had ‘turned’ (see what I did there?) into this Pig Bench that just cried out to be stroked and sat upon. So we did.

The pig bench has nothing to do with pigs it would seem — apparently the shape is inspired by traditional vaulting horses (one of the many bane of those horrendous gym classes at school so many years ago).

And so to the meal. After a while I remembered (actually Val told me) to remove my “Vote Labour” sticker. Whilst happy to tell everyone of and explain my political allegiances at great, great length, the others here were far more interested in farming and the food, so I steered clear of politics and religion. That said, they were — especially after the first few glasses of wine — an interesting and voluble bunch, so the evening was far less problematic than we’d feared. 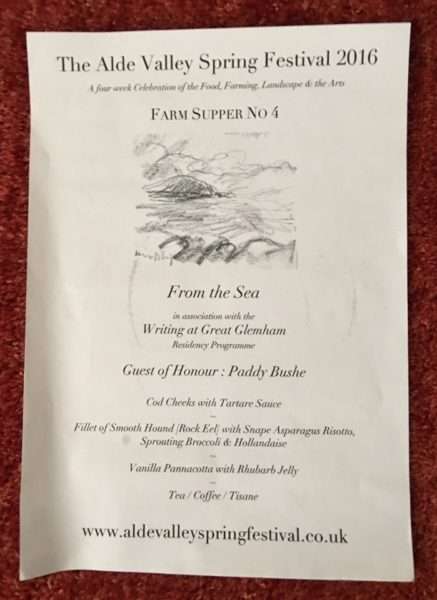 Paddy, an Irish poet, brought to the event by the event organiser — the frightfully well bred Jason Gathorne-Hardy (Earl of Cranbrook and Baron Medway) who was actually totally charming and is also a dedicated environmentalist & biologist as well as a very capable artist — was also less painful than we’d feared.

Our wine was a bottle of this great Chardonnay, courtesy of the geniuses at Liquid Farm, for whom Val designed the labels and the branding that they still use. 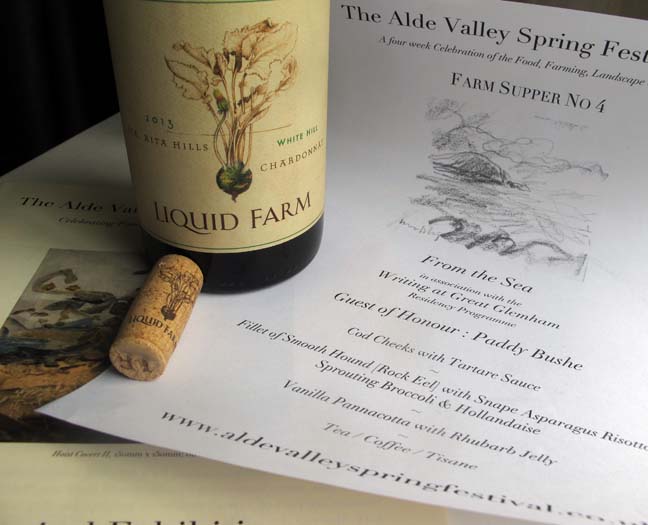 The food was truly good — cooked by Peter Harrison (his tagline “Have knives, will travel“) — with a lovely deft touch using local, fresh produce.  The man is highly recommended — he used to run his own place but now solely caters for outside groups and parties and I can see the attraction of not having that fixed overhead and set times — so call him up and book him. Seriously, you won’t regret it.

And then we made our way back to The Round House through the dark, winding Suffolk lanes. We didn’t get lost. Much. Or for too long.

The “one last thing” for today?

Remember how much I rate Richard H Turner of Hawksmoor and Turner & George fame? Well, so does Brad McDonald, chef at Shotgun, London whose menu & inventiveness

means his place needs to be one of our next port of calls. He buys from the team at Turner & George. This (recipe and guide) is his take on “the 3 simple steps to the perfect burger”. Yes, that quest. Again. The one that’ll never end, for which there is no perfection to be found. Where the journey is all but, unlike that of Sancho Panza or that for the mythical Grail, one that at least gets you well (indeed sometimes marvellously well) fed en-route. 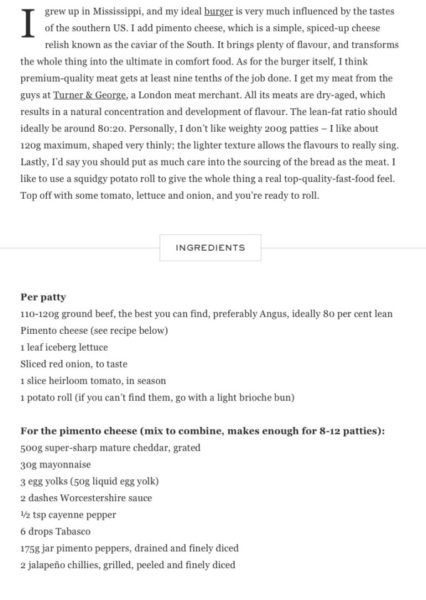